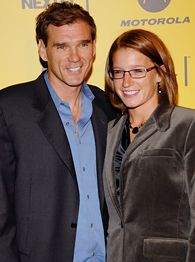 "I don't think it's any secret that because of the personal relationship between Erin and I it hurt her career," Evernham said on Friday at Indianapolis Motor Speedway. "The proper thing to do and something her and I would like to do is move her to another race team.

"I think the girl has a lot of talent. But if I sit here and say to somebody, 'Look, she's got a lot of talent, you should sponsor her,' my credibility is not good because of the personal relationship," he said.

The relationship became a point of contention with driver Jeremy Mayfield, who after being released from Evernham Motorsports alleged in a 2006 lawsuit that his boss was an absentee manager largely because of his "close personal relationship with a female driver he engages to drive on NASCAR's ARCA, Truck and Busch Series."

"That relationship became a subject of considerable discussion and distraction in the Nextel Cup garage area during the 2006 season," the court document said.

Evernham, who still has a relationship with Crocker, admitted the outside distractions were a factor in performance and his ability to build a quality team.

"We did our part to not let it affect our performance," he said. "What happened was a lot of the stuff that was written and said and reported probably had people form opinions that were necessarily not true. I don't know how you do things differently. I felt we were very professional about everything we did and continue to be.

"But people are going to draw their opinions based on what the media reports. And that affects sponsorships and the perception of the quality of people you get to work on the car along with the quality of the sponsorship," he said.

Evernham also admitted that the Dodge trucks weren't up to par last season and that he possibly moved Crocker, who finished 25th in the Truck standings, along too fast.

Those things and a lack of sponsorship forced Evernham to shut down the team this season.

But Evernham still believes in Crocker, reminding she has five top-five finishes in seven starts in the ARCA series against developmental drivers from some of NASCAR's top teams.

"She's racing really well," Evernham said. "Will she ever be Jeff Gordon or Tony Stewart or Kasey Kahne? I don't know. But I think she can be the best lady to come to NASCAR."

Evernham said the loss of Crocker's primary sponsor, Betty Crocker and General Mills, had nothing to do with their relationship and everything to do with the company putting its resources into the No. 43 team of Petty Enterprises.

"I believe in her," Evernham said. "We're trying to support her through her ARCA program. She has a lot of things going on. Hopefully, something will fall for her. She's talked to some Busch teams, some Truck teams. She's an excellent ... role model for a female driver. She can get the job done.

"The bottom line is the best thing for us to do both professionally and personally would be to help her to go to another race team," he said.