It was fair to assume that even if the combination of Bayern Munich and young, new manager Julian Nagelsmann were to work out brilliantly over time, there might be a breaking-in period at the start.

Even while winning a ninth consecutive Bundesliga title, Bayern's defensive balance had fallen a bit out of whack in 2020-21, which had contributed to earlier-than-expected exits in both the Champions League and DFB-Pokal. The defensive personnel itself changed pretty significantly with the departures of stalwarts David Alaba (Real Madrid) and Jerome Boateng (Lyon). Throw in Nagelsmann's increasing appreciation for a three-at-the-back structure while at RB Leipzig -- not something Bayern are accustomed to using -- and some shaky preseason friendly results, and it was easy to figure that the nine-time defending Bundesliga champion might not be in fifth gear from the start of the 2021-22 season.

Technically, they weren't. Ten minutes into the new campaign, Alassane Plea scored on a perfect counterattack to give Borussia Monchengladbach a 1-0 lead over die Roten.

Since then? Fifth gear all the way. Sixth, maybe.

Bayern salvaged a draw against Gladbach, and aside from a pretty fluky loss to Eintracht Frankfurt -- they generated 2.4 xG to Eintracht's 0.6 and outshot die Adler by 20-5 -- they have outscored six other Bundesliga opponents by a 27-5 margin. They beat Borussia Dortmund 3-1 in the DFL-Supercup. They obliterated their first three Champions League opponents (Barcelona, Dynamo Kyiv and Benfica) by a combined 12-0. They ran circles around poor fifth-division Bremer SV, 12-0, in their first-round DFB-Pokal encounter.

In a battle of the top two teams in the Bundesliga table last Sunday, they took the lead over Bayer Leverkusen in the fourth minute, then scored four more by halftime in a 5-1 cruise. Refocused after the international break and frustrated by the loss to Eintracht, Bayern counter-pressed Leverkusen into oblivion.

Looking specifically at Bundesliga play, Bayern's improvement thus far has been comprehensive, which is a pretty amazing thing to say about a team that has won every league title since 2013 and won last year's race by 13 points.

Granted, they're only about a quarter of the way through the season and have played only one team from the current top six in the table thus far. But they kept Borussia Dortmund at bay in the Supercup, and they stomped an RB Leipzig team that has been their stiffest competition over the past couple of seasons.

Bayern are possessing the ball more, advancing it far more via carry and winning 55% of their ground duels (up from 52%). They are generating more shot quantity and quality and allowing less of both. They appear to have shored up last season's defensive vulnerabilities without in any way stunting their offensive explosiveness.

It's truly a sight to behold.

What has Nagelsmann actually changed?

The 34-year old Nagelsmann is already in his sixth season as a Bundesliga manager. Trained in the ways of modern German football -- attacking, counter-pressing, attacking and counter-pressing -- he led Hoffenheim to more than 1.5 points per game in all competitions in 2½ seasons there, before honing his approach a bit at RB Leipzig starting in 2019-20. His Red Bulls could possess the ball with the best of them, but they became a little more pragmatic and defensive over time. They had a few gears.

It worked brilliantly. RBL finished third in the Bundesliga in 2019-20 and took down Tottenham Hotspur and Atletico Madrid on the way to the Champions League semifinals; in 2020-21, they rose to second in the Bundesliga and topped Manchester United to advance to the Champions League knockout rounds once more. The success earned Nagelsmann the keys to Germany's biggest club last summer when Hansi Flick left to take over the German national team, and he brought star defender Dayot Upamecano and midfielder Marcel Sabitzer with him from Leipzig.

For all the change on the sideline and in the back of the Bayern lineup, the German champs have enjoyed massive continuity in attack, the area of the game in which they are consistently the best in Europe. Robert Lewandowski continues to lead the way up front (with Eric Choupo-Moting still his ace backup), and all primary wingers and attacking midfielders -- Thomas Muller, Serge Gnabry, Kingsley Coman, Leroy Sane, Jamal Musiala -- were with the team last season. For that matter, the midfield duo of Joshua Kimmich and Leon Goretzka also remains in place, albeit with reinforcement from Sabitzer.

Still, those responsible for the buildup in attack have changed almost completely. With Alaba and Boateng gone and right-back Benjamin Pavard limited significantly by injury -- he's recorded just 123 minutes in league play -- Nagelsmann has leaned heavily on some combination of Upamecano and defensive holdovers Lucas Hernandez and Niklas Sule. They're each averaging more than 90 touches per 90 minutes (Alaba and Boateng averaged 87 and 85, respectively), and Upamecano and Hernandez are both averaging more than 83 pass attempts as well.

With two of these three serving as the back line of the buildup, a right-back like Josip Stanisic or Pavard can fold in to create a three-man midfield with lots of passing options. If Sule is playing right-back, he can serve as the third-man in a three-at-the-back structure in attack. Left-back Alphonso Davies, meanwhile, almost becomes a left-winger in this system: his overall touches and pass attempts are down, but he's gone from 0.9 chances created per 90 to 1.6 and from 0.14 expected goals and assists per 90 to 0.32.

In short, Nagelsmann has crafted a way to field Bayern's customary 4-2-3-1 structure in defense while turning it into almost a 3-2-5 in attack. 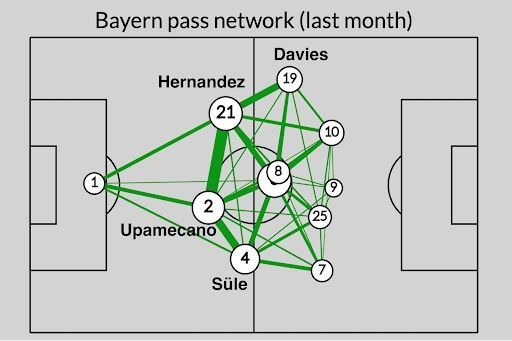 Data via Stats Perform and TruMedia. Thickness of the lines represent frequency of passes

Bayern have sacrificed width, particularly on the right -- their average possession has shrunk from 34.9 meters (third in the league) to 33.3 (13th), and their average pass distance has gone down as well -- in the name of numerical superiority in midfield. It's creating both safety and passing options in buildup, and it's increasing the number of players near the ball, which improves their counter-pressing ability and snuffs out counterattacks before they start.

Look at the pass network above again and find No. 10. That's Sane, the former Manchester City left-winger who came to Bayern last season and played mostly as an inverted winger coming in from the right.

After recording double-digit goals and assists (and averaging 49 chances created per season) in the Premier League in 2017-18 and 2018-19, he managed six goals and nine assists, among 33 chances created, in his return to the Bundesliga. Those aren't bad numbers, but they didn't necessarily live up to the transfer fee or his salary. (That's doubly true considering that his salary was supposedly the trigger for a series of contract renegotiations for other stars at the club.)

Under Nagelsmann, Sane has moved back to the left -- left-center, really -- and has thrived. He's scored twice and created 19 chances -- more than half of his 2020-21 total -- in Bundesliga play, and he's got three goals and three assists in three Champions League matches. His nasty, curving free-kick against Benfica in the 70th minute on Wednesday broke a scoreless draw and ignited a late four-goal Bayern binge.

Considering no one's production has really gone down, Sane's production is essentially a bonus. In all competitions, Lewandowski still has 14 goals and 17 chances created in 11 matches -- it was considered a "drought" when he didn't score in two straight matches, the horror -- while Muller has four and 29, respectively. Gnabry, moving in from the right as opponents get preoccupied with the pieces on the left, has also scored six goals.

Davies is creating more chances from wide of Sane as well. When he gets time on the pitch, the 18-year-old wunderkind Musiala has four goals and 11 chances in 371 minutes, while Choupo-Moting has seven goals in 194 fill-in minutes. Coman, the hero of the 2020 Champions League final, has been battling injury and only played 158 minutes, but it hasn't mattered.

When Bayern are counter-pressing and dominating like they did against Bayer Leverkusen, it's hard to imagine them dropping many points. But theoretically, you can't always play with that level of intensity, and under more normal circumstances, there's a chance that defensive issues could pop up.

The buildup has been great for creating scoring chances, but opponents have started 7.9 possessions per 90 in the attacking third, ninth in the league, and up from 6.2 last season. It hasn't produced any goals yet, but regression to the mean could strike in that regard, especially considering that 25% of opponents' shots are attempted with zero or one defender between the shot and goal. Only leaky Borussia Dortmund has allowed a higher percentage, while only Mainz and Wolfsburg have offered opponents a lower percentage of shots under moderate to high pressure than Bayern's 62.5%.

Offering clean looks at the goal in an offense-friendly league is a recipe for a surprise loss or two, but it would be a shock if they didn't win their 10th straight Bundesliga crown. FiveThirtyEight's SPI ratings give them an 86% chance, which is ridiculously high for this early in the season. But in a crowded Champions League field that features not only last year's finalists (Manchester City and Chelsea), but also the deadly-in-moments PSG and potent attacking teams like Liverpool and Ajax, clean looks would almost certainly backfire.

The remodeled defense will forever be this team's weakest link considering the attacking talent in question, and just because it hasn't backfired on Bayern yet doesn't mean it won't. Still, this team has looked like the best in Europe over the past month or so. If you cannot convert the chances they give you, they will overwhelm you just as they did when they won the Champions League in 2020.