To mark Friday the 13th, we're looking at which footballers have fallen victim to bad luck over the years...

On this unluckiest of days, it's only right that we spend our time revelling in the misfortune of some of the unluckiest footballers ever to have stepped out on to the pitch -- presumably after cracking a mirror on their way out of the locker room and then crossing the path of a black cat.

The ESPN Luck Index can explain who had the best and worst luck from the 2018-19 Premier League season, while our update for this season proves that Arsenal are the ones suffering the most.

Here's a collection of some really unlucky moments from years past.

A bump on the pitch

How about kicking off with the fateful night that three unfortunate divots -- Gary Neville, Paul Robinson and the one in the turf -- combined to consign England to defeat against Croatia shortly before they failed to qualify for Euro 2008?

The grinning face of Borat mocking the Three Lions from the advertising boards in the background was just the sour icing on the misery cake.

Liverpool goalkeeper Pepe Reina was infamously foxed by a marauding beach ball that had been thrown into his already crowded penalty area during a game against Sunderland in 2009.

For the record, the duplicitous beach ball in question attained such a level of notoriety that it was put on display in the National Football Museum.

#OnThisDay in 2009, Darren Bent's shot cannoned off a beach ball and beyond a baffled Pepe Reina.

The referee didn't remove the object from the field of play immediately, and didn't notice the deflection.

It *might* be the only beach ball on display in a national museum. https://t.co/cNuRdROaWI pic.twitter.com/i9fnFY0ke6

Blackburn Rovers goalkeeper Tim Flowers had a reputation as being rock solid between the sticks but even he proved no match for the deviously uneven Ewood Park turf when Liverpool striker Stan Collymore unleashed a trickler in his general direction back in 1996.

Most known for? Has to be this Stan Collymore goal past him in 1996.... pic.twitter.com/vCnstsfe0j

This legendary clip sees FAR Rabat goalkeeper Khalid Askri succumbing to a bout of instant karma after gloating toward the crowd over a "saved" penalty against Maghreb during a Moroccan cup game.

Firstly, honourable mentions must go to the likes of Owen Hargreaves, Kieron Dyer and Abou Diaby who saw long swathes of their careers stymied by various tweaks and twangs. However, some players have managed to rule themselves out in much more specific and ridiculous circumstances.

For example, Rio Ferdinand crocked himself during his Leeds United days by propping his feet up on a coffee table while watching television for a little too long and consequently ruptured a tendon in his knee.

Darren Barnard was a serviceable midfielder for Barnsley but once missed five whole weeks of action after slipping in a puddle of pee left behind by his new puppy and tearing his knee ligament.

Santi "Safe Hands" Canizares was prevented from playing in goal for Spain at the 2002 World Cup after dropping a bottle of aftershave in a hotel sink only for a shard of glass to fly out and sever a tendon in his toe.

The story goes that ex-Norway international Svein Grondalen (on the left, below) suffered a characteristically Scandinavian injury in the 1980s when he ventured out on a morning jog only to be knocked over by a stray moose.

Everything was going swimmingly for Steve Morrow after scoring the winner in the League Cup for Arsenal against Sheffield Wednesday in 1993 -- that was until he was dropped by Tony Adams during the postmatch celebrations and broke his collarbone. 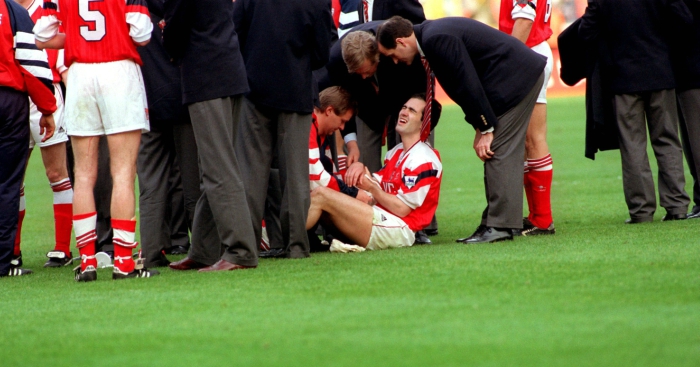 Carroll gets away with it

Quite possibly the most ridiculous "save" ever wrongly accredited came back in 2005 when Manchester United goalkeeper Roy Carroll calamitously fumbled Tottenham midfielder Pedro Mendes' 60-yard up-and-under into his own net in the 88th-minute and still somehow managed to get away with it. Where was VAR then?

After getting off to a rotten start against Germany at the 2010 World Cup, England appeared to have pulled themselves back level at 2-2 when Frank Lampard thundered a long-range shot in off the underside of the bar.

Despite all empirical evidence to the contrary, the "ghost goal" was ruled out and the Three Lions quickly capitulated to lose 4-1.

The Hand of Henry

Republic of Ireland fans still curse Thierry Henry's name after the forward covertly employed the use of an arm to save a 1-1 draw for France in extra-time and send them to the 2010 World Cup at the Irish's expense.

Henry released a statement afterwards saying: "The fairest solution would be to replay the game but it is not in my control ... Naturally I feel embarrassed at the way that we won and feel extremely sorry for the Irish who definitely deserve to be in South Africa ... I have said at the time and I will say again that 'yes' I handled the ball. I am not a cheat and never have been."

The Hand of God

However, the bitter grudge between England supporters and Diego Maradona stretches back even further after the latter also used an illegal appendage to score for Argentina at the 1986 World Cup.

Sympathy was in short supply when Chelsea captain John Terry ended the night of the 2008 Champions League final in floods of tears after slipping while taking the crucial fifth penalty during the shootout against Man United in Moscow. United went on to win 6-5 and lift the trophy.

The armband again weighed heavy when Steven Gerrard quite literally fell foul of the laws of friction and gravity when he slipped at a pivotal moment against Chelsea at the business end of the 2013-14 season.

The Blues ultimately won 2-0 at Anfield to end their opponents' 16-game unbeaten streak, which ultimately saw Brendan Rodgers' side blow their title tilt with two weeks of the season remaining and they had to watch Man City claim it instead

We've reserved a special place for a man who presents an incredibly strong claim to be the unluckiest footballer, certainly of the modern era.

As good as he was, and as much as he won with Bayern Munich and Chelsea, Michael "Bridesmaid" Ballack finished runner-up in no less than nine major competitions during his professional lifetime.

The fact that he wore the No. 13 shirt for the majority of his career is surely no coincidence?