Jump to: Return of the Robot? Crouch ready answer Tottenham in their hour of need

As if it weren't already apparent, it's looking increasingly like there might be something a little special about Erling Braut Haaland.

The 19-year-old Norwegian prodigy scored both goals for Borussia Dortmund in their 2-1 win over Paris Saint-Germain in the first leg of their Champions League round-of-16 clash -- thus sending yet more records tumbling.

Having arrived at Dortmund from FC Salzburg in January for just €20m, Haaland scored his 38th (a predatory tap-in) and 39th (an unstoppable left-footed strike from outside the area) goals of the season at Signal Iduna Park on Tuesday evening -- taking his total for his new club to 11 goals in just seven appearances.

This was enough to see him become the quickest player ever to reach the 10-goal mark in Champions League history, taking just seven appearances to do so (four fewer than anybody else).

Haaland is now the competition's joint top scorer this season, along with fellow Bundesliga marksman Robert Lewandowski. His haul of 10 goals is the same amount as Dortmund as a whole have scored in the competition this season and one more than Atletico Madrid and Barcelona!

Not that he's remotely phased by any of it, of course.

Haaland rattled in eight goals for Austrian club Salzburg in the group stage before making the switch to Germany, also meaning he is now the first ever player to score for two different clubs in the same Champions League campaign.

At 19 years and 212 days, Haaland is the second-youngest player to score 10 goals in the Champions League behind Kylian Mbappe, who passed the milestone aged just 18 years and 350 days.

Haaland also slots in behind Mbappe (18 years, 113 days) and former Sevilla defender Deivid (19 years, 37 days) on the list of youngest players to have scored more than once in a single UCL knockout match.

It's little wonder that his teammates let him have his moment alone to bathe in the adoration of Dortmund's famous Sudtribune after the final whistle. 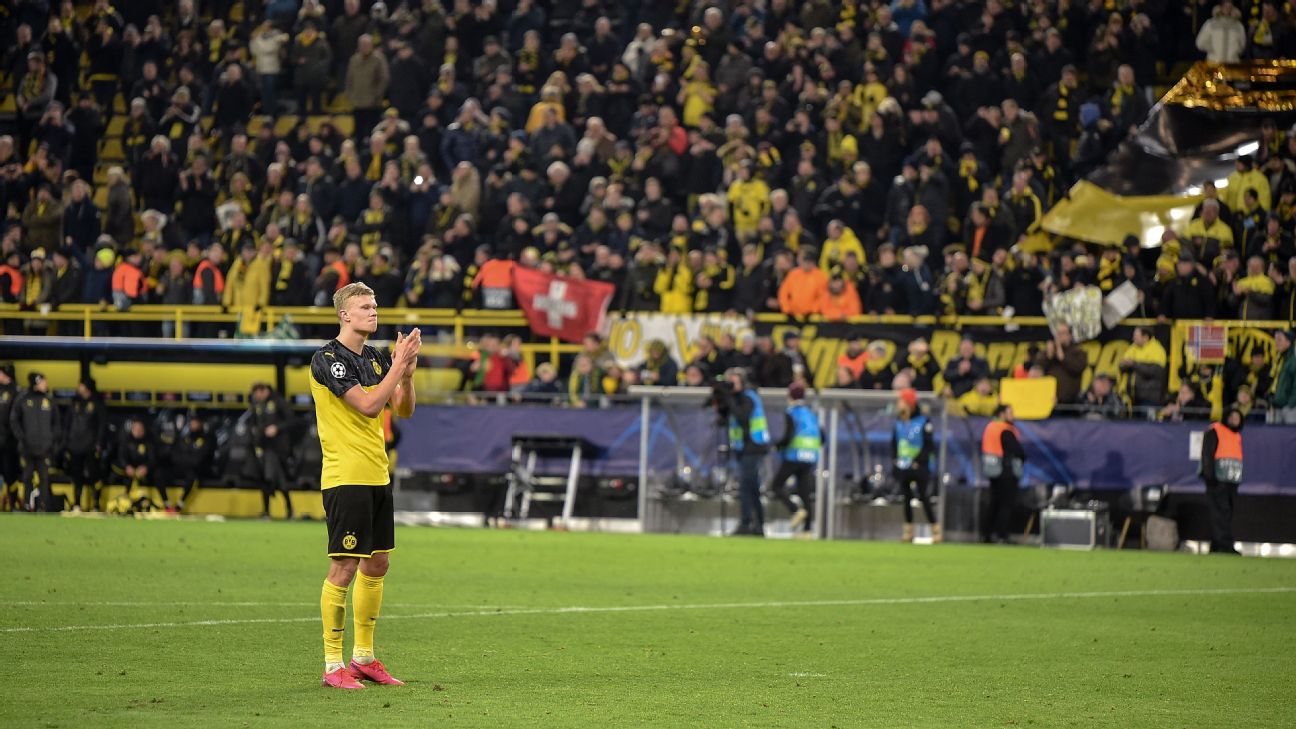 Unsurprisingly, Haaland became one of the first players to be given one of UEFA's new official Man of the Match trophies (along with Atletico Madrid's Lodi), as ordained by their panel of technical observers. 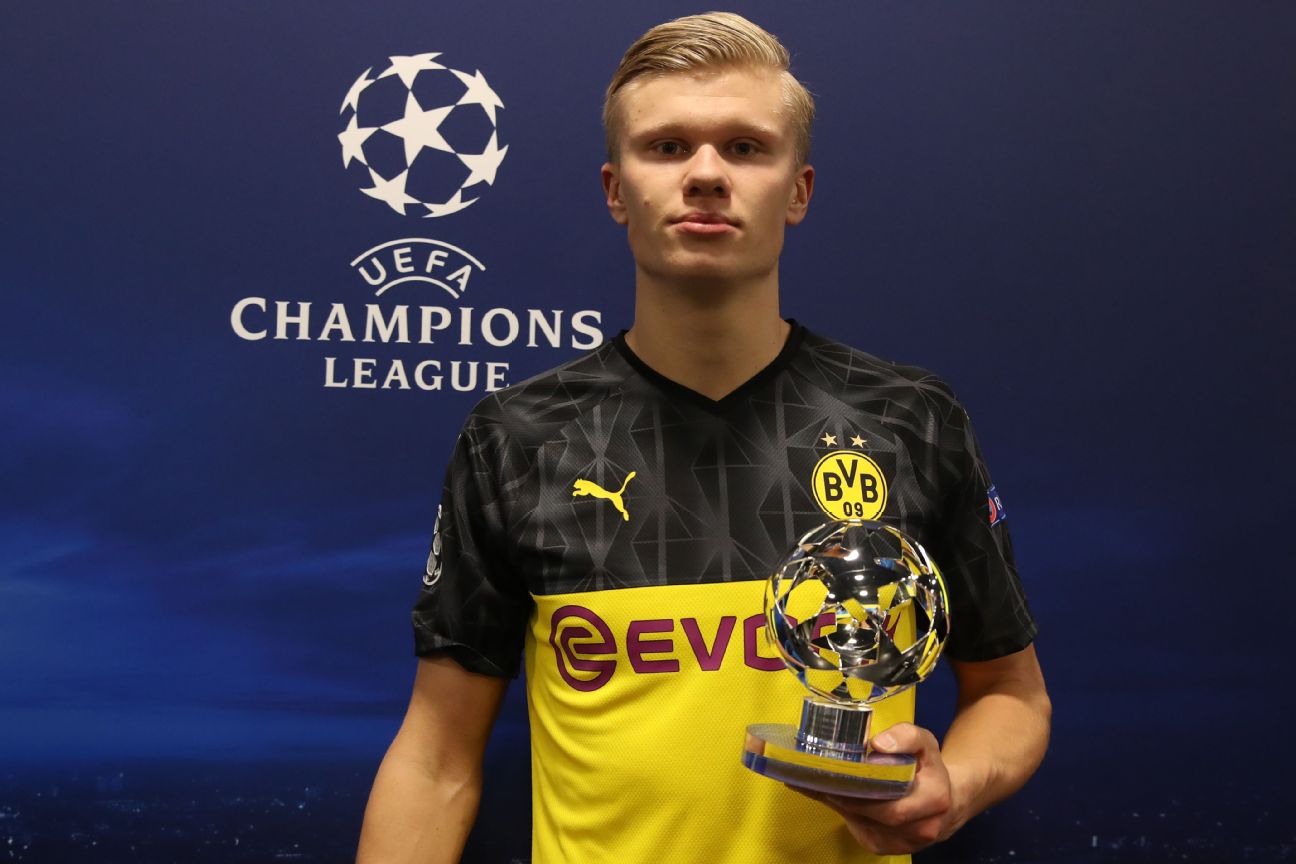 Oh, and as if all that wasn't enough, Sky Italia's postmatch analysis reported that the teen sensation was clocked sprinting for 60 metres at a speed of 6.64 seconds.

To put that in perspective, Haaland's pace was only 0.30s shy of the 60m world record (6.34s), set by Christian Coleman of the United States in the men's final at the World Indoor Championships in 2018.

Haaland became Usain Bolt for a moment on that counter 🏃‍♂️🏃‍♂️🌪pic.twitter.com/wpP4Znxaxt

Erling Haaland clocked a time of 6.64 seconds for a 60 metre sprint during a first half counter attack tonight. The 60m world record (by US sprinter Christian Coleman) is 6.34 seconds! pic.twitter.com/vcFMLtXIIY

Coleman set the record in the 60m men's final at the World Indoor Championships in 2018. Haaland's speed (albeit measured from a running start) would have seen him finish level with eighth-placed sprinter Emre Zafer Barnes of Turkey, who finished with a 6.64 time.

How long can Haaland maintain his acceleration up the scoring charts this season? We don't know, but it will sure be fun finding out.

Return of the Robot? Crouch ready answer Tottenham in their hour of need

Tottenham Hotspur have seen their designs on finishing in the top four dented significantly recently after losing their two main goal scorers to injury until April at the earliest.

First up, Harry Kane succumbed to his annual long-term injury in January before Son Heung-Min followed suit by sustaining a fractured arm in Sunday's dramatic win over Aston Villa.

Jose Mourinho seemed upset about the loss of Son, likening the loss of the South Korean to his side being trapped inside some kind of weird building with broken stairs.

Mourinho also grumbled that Spurs would probably be unable to sign any emergency cover in the current market before joking that Peter Crouch -- who retired last July -- might be his only viable option.

However, a particularly tall, lanky beacon has since shone in the darkness, with Crouch informing Mourinho that he's made himself available for a heroic comeback.

The former England striker -- who, for a time, celebrated his goals by dancing "The Robot" -- spent two spells at Spurs, the first as a youth player before returning for three seasons as a senior between 2009-2011.

Crouch spearheaded the Spurs attack as they reached the quarterfinals of the Champions League in 2010-11, so he knows a thing or two about making a deep run in the competition.

The prophecy has already been written. The Robot's Return must become a reality.