With many training grounds off-limits, clubs have sent footballers home, where they're adhering to an isolation period for the next few weeks. How are they passing the time?

Reflections by the sea 🌊🙏

After eight weeks in isolation with his family on his native island, Juventus star Cristiano Ronaldo has now left the Portuguese island of Madeira and flown back to Turin.

Ronaldo was recalled after Serie A gave permission for all players to return to individual training this week. He will now undergo a second quarantine phase before re-joining his teammates in 14 days.

Before Ronaldo boarded his jet, CD Nacional -- the club based in his hometown of Funchal on Madeira where he began his long and illustrious career as a youth player -- revealed on social media that they had given him a special parting gift. The 35-year-old was presented with a lifetime membership by the Portuguese second-division club, inducted as member No. 7,140 by former Nacional coach Pedro Talhinhas.

The former Real Madrid forward had visited the Estadio da Choupana a couple of weeks ago while still in lockdown on the island. Ronaldo spent two seasons in the Nacional youth squad before being snapped up by Sporting Lisbon and moving to the Portuguese mainland.

Still, Ronaldo's presence looms large on Madeira, particularly in Funchal, which is the venue for his personal museum, an eponymous hotel and, of course, the airport that bears his name and has a bronze bust in his likeness outside the entrance.

That version was unveiled in June 2018, replacing its more famous/infamous predecessor that was unleashed upon an unsuspecting world the previous year. 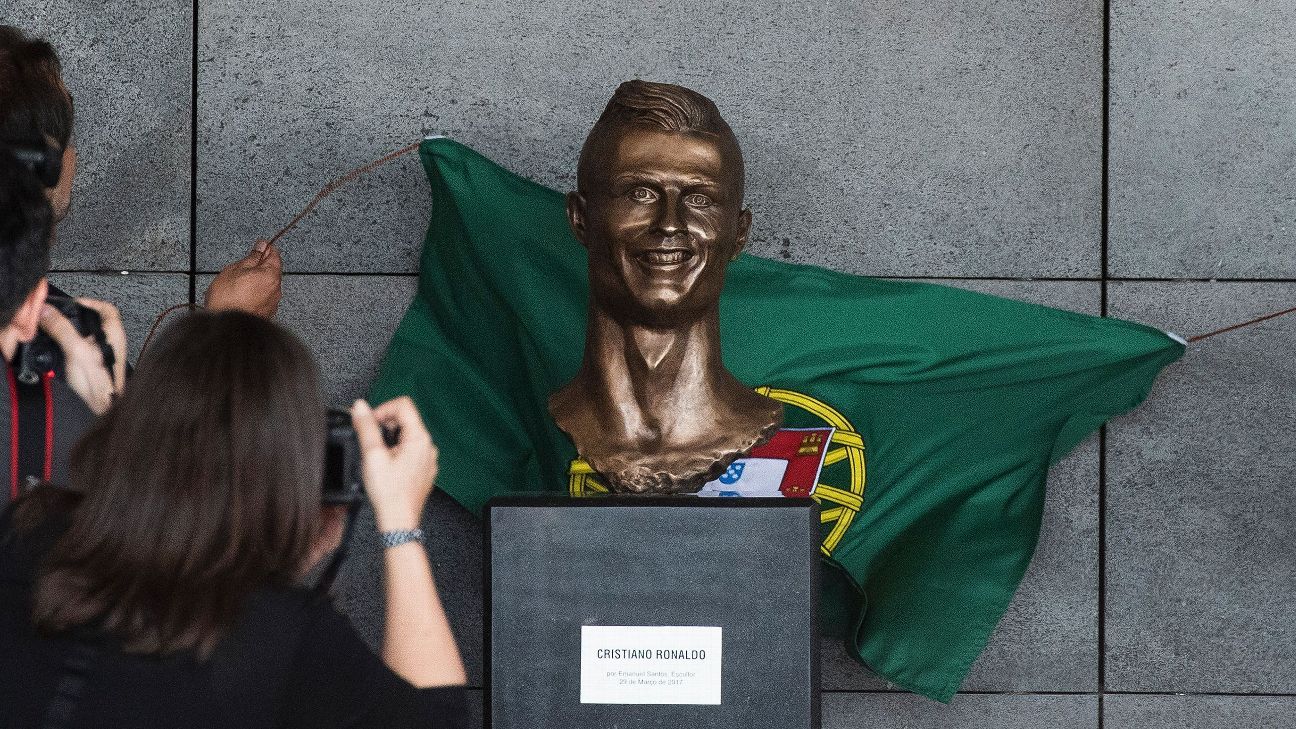 We know which one we prefer...

In his customary state of partial undress, Sergio Ramos is teaching himself to play the piano.

"I've never played in my life, but step by step," the Real Madrid captain wrote while performing a perfectly passable version of "What A Wonderful World."

Ramos isn't the only footballer learning their scales on the ivories either, with former Tottenham Hotspur midfielder Ryan Mason also demonstrating his musical chops.

Liverpool midfielder Alex Oxlade-Chamberlain spent his evening relaxing by the enormous fire pit in his back garden.

While the Liverpool midfielder and his partner, Little Mix singer Perrie Edwards, look relaxed, their two dogs don't seem quite as comfortable being so close to the blaze.

Back in Barcelona 🤸🏼‍♂️

There were joyous scenes as Frenkie de Jong was reunited with his faithful canine chum after returning to Barcelona.

Manchester United defender Eric Bailly is concentrating on keeping his fitness up with a grueling workout that involved donning a fully weighted training suit.

Things were a little more relaxed at Casa del Beckham, where Inter Miami chief David took on son Romeo in a friendly game of teqball.

The old pro's competitive nature soon kicked in as dad was up on the table, smashing winners at the net.