Brazil legend Pele, born Edson Arantes do Nascimento, turned 80 on Friday, Oct. 23. For most of those eight decades he has been famed for his prowess to such an extent that he is still one of the most recognised sporting figures, years after his retirement.

The man from Minas Gerais only played for three teams -- Santos in his homeland, the New York Cosmos and the Selecao, Brazil's national team -- but he managed to become a goal-scoring great on the soccer pitch and a cultural icon away from it.

To mark his special day, ESPN Brasil prepared a selection of 12 historical photos of "O Rei" ("The King"). The work was done in partnership with the Getty Images agency, whose archive director, Bob Ahern, wrote a few words about the Pele's impact for the sport in the U.S. 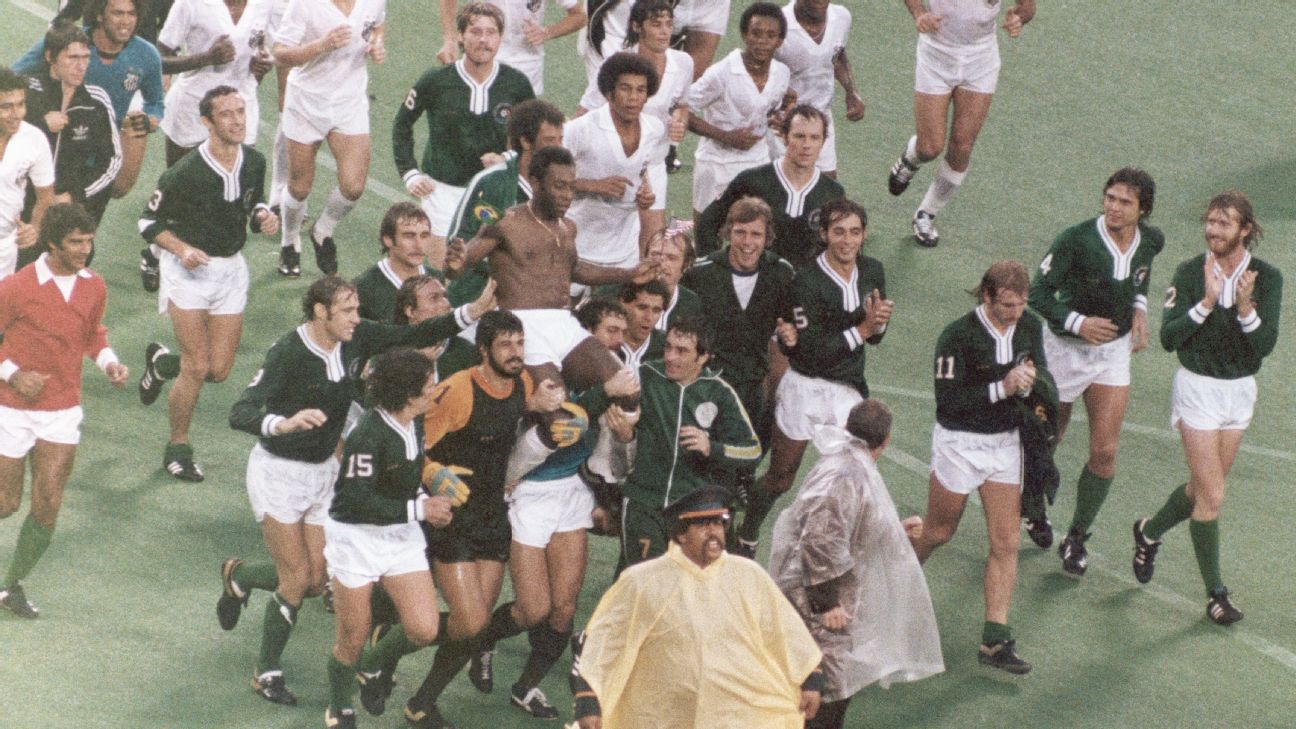 Pele leaves the packed field in his farewell game on Oct. 1, 1977, in New Jersey. He played the first half for the Cosmos and the second for Santos. 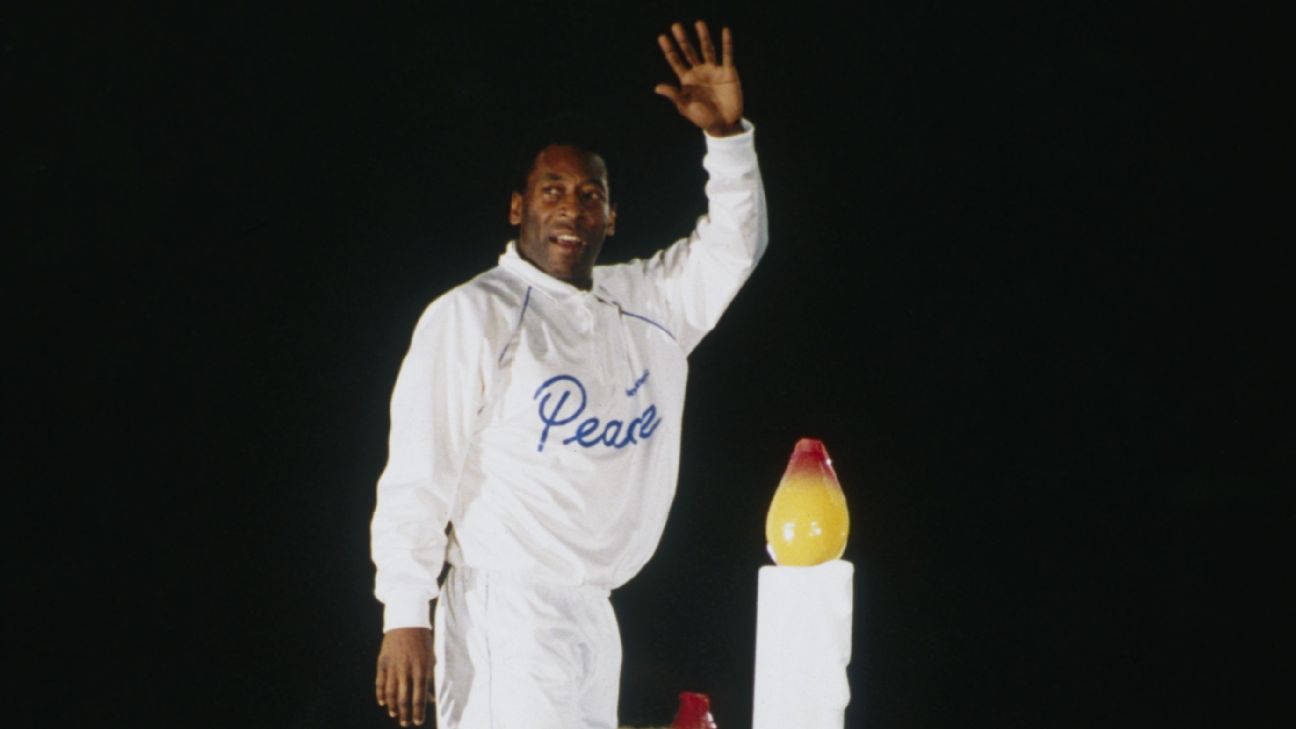 Pele waves to the crowd on his 50th birthday. 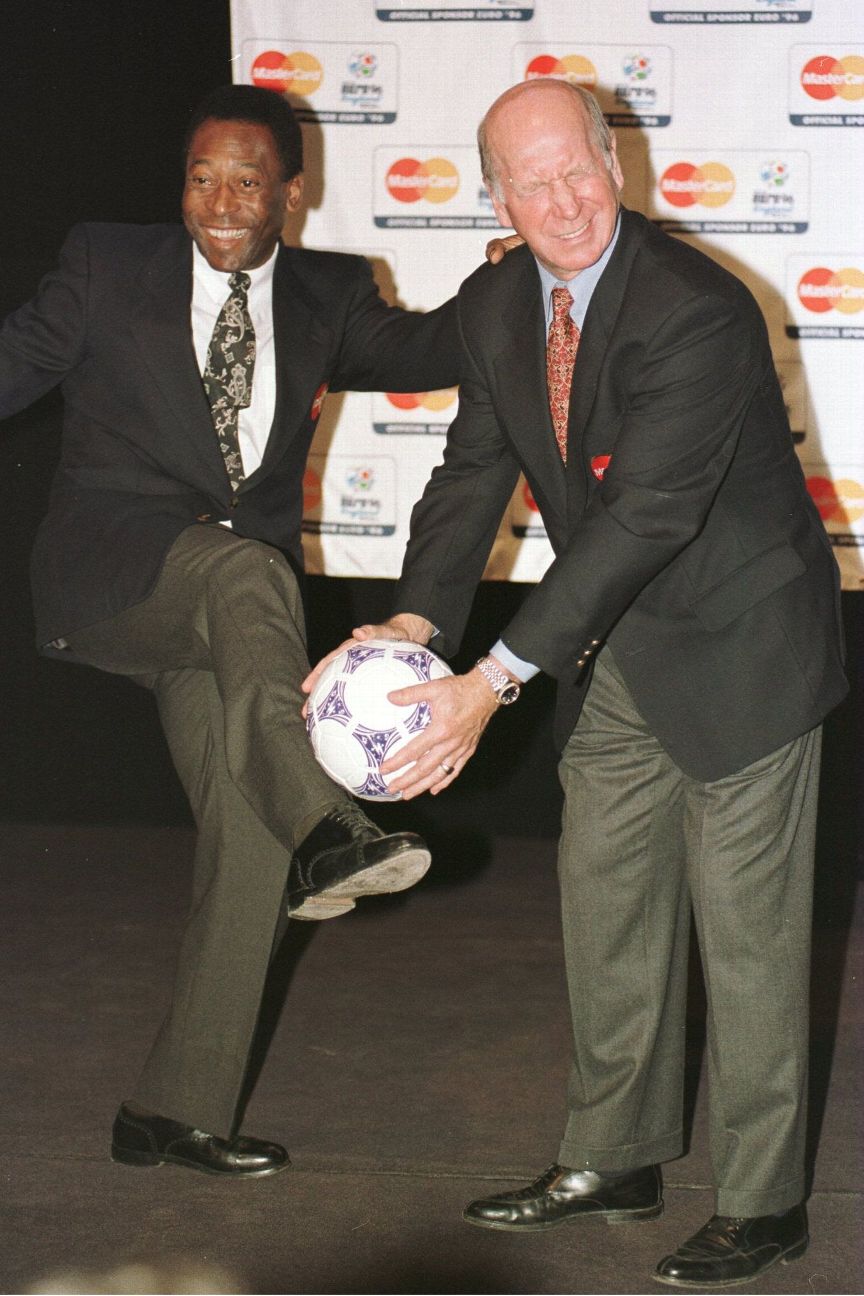 Pele and England great Sir Bobby Charlton during the draw of the 1996 European Championship, in December 1995. 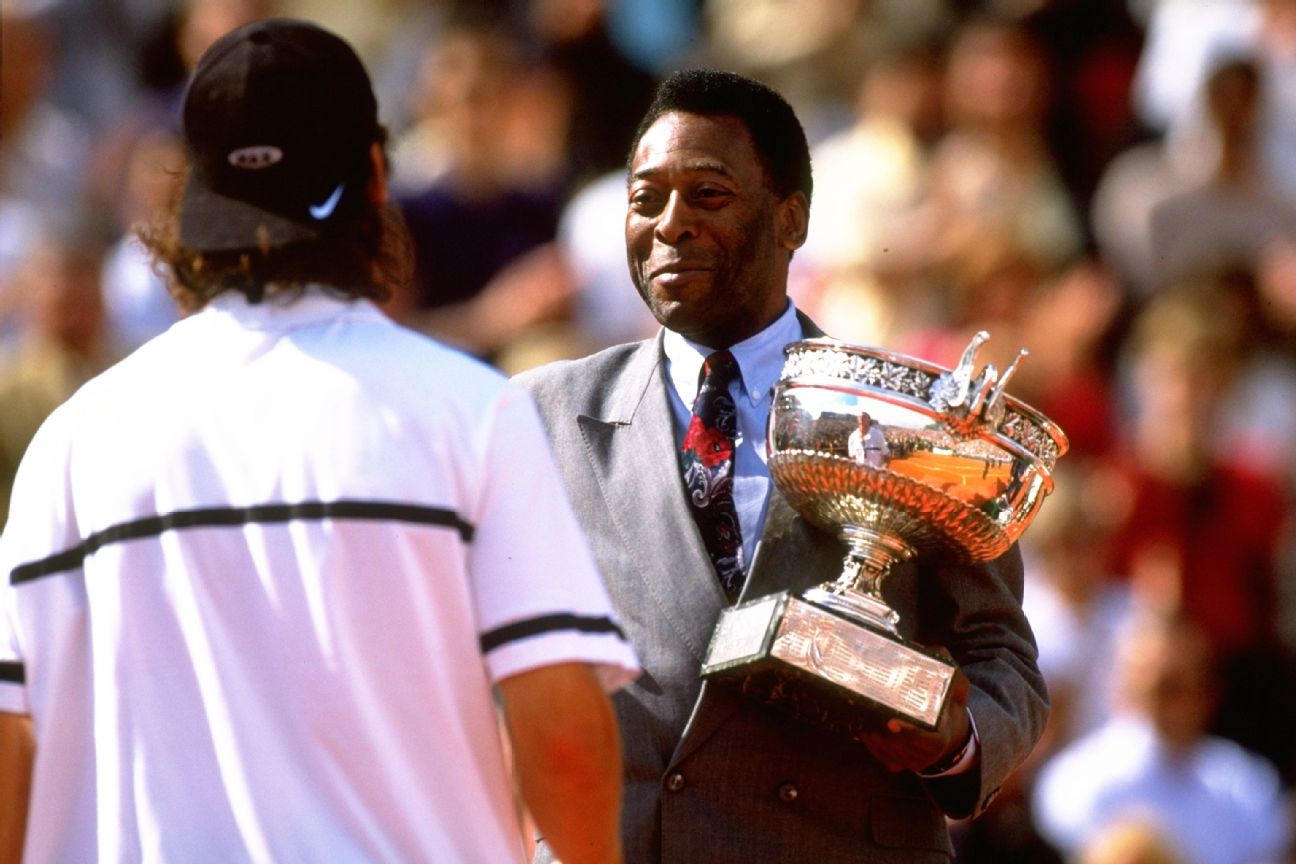 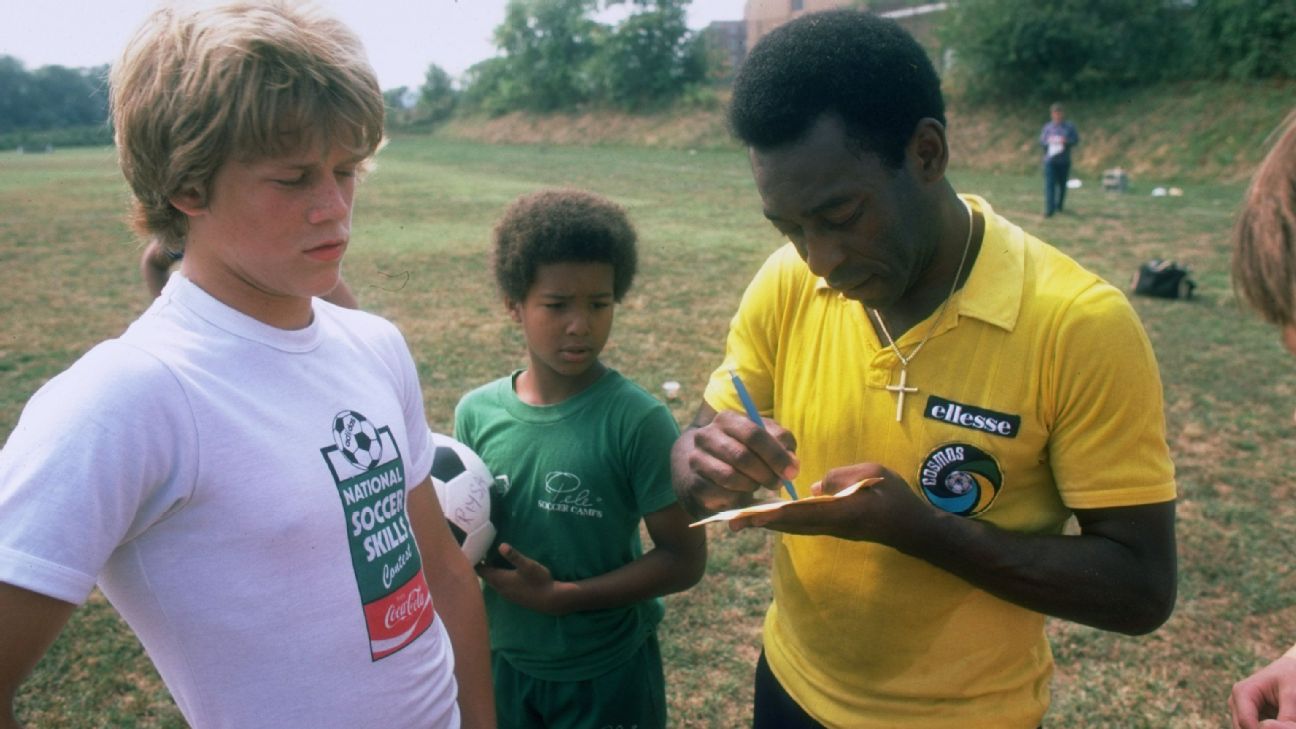 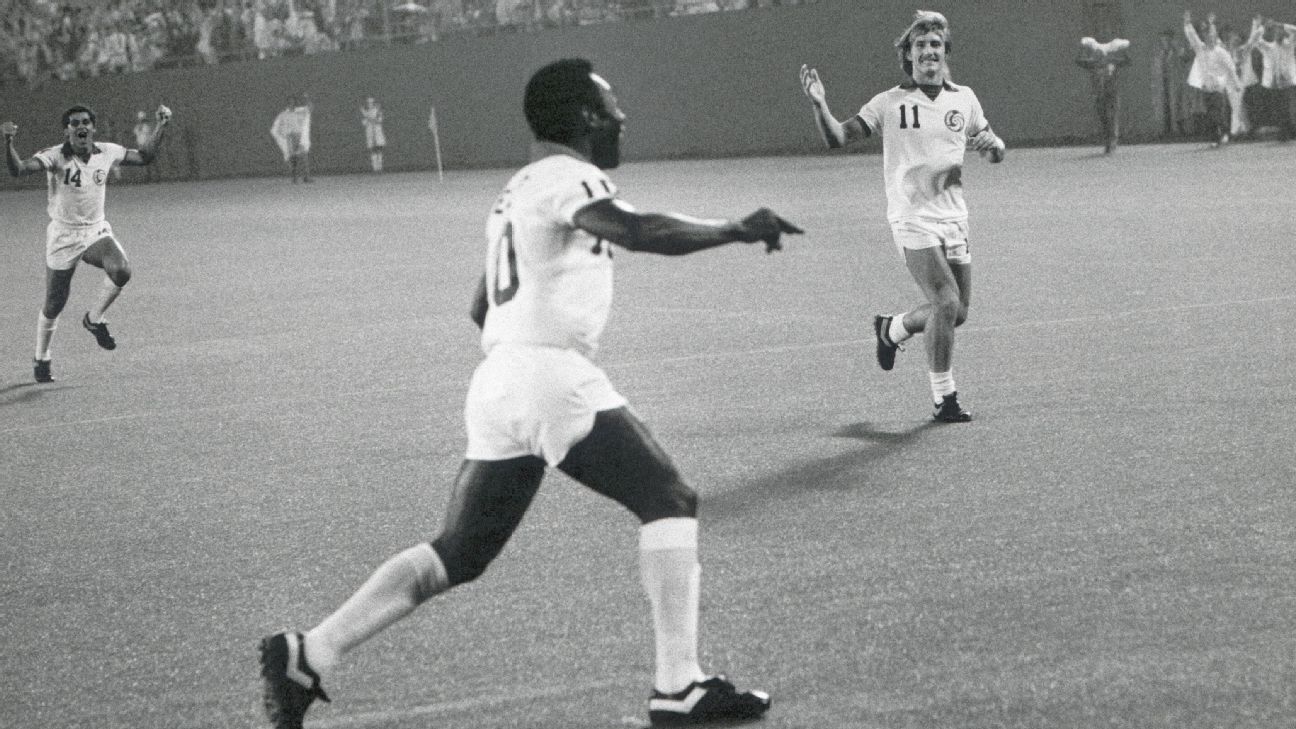 Pele celebrates a goal for Cosmos against Rochester Lancers and is celebrated by his teammates Nelsi Morais (#14) and Stephen Hunt (#11), in August 1977. 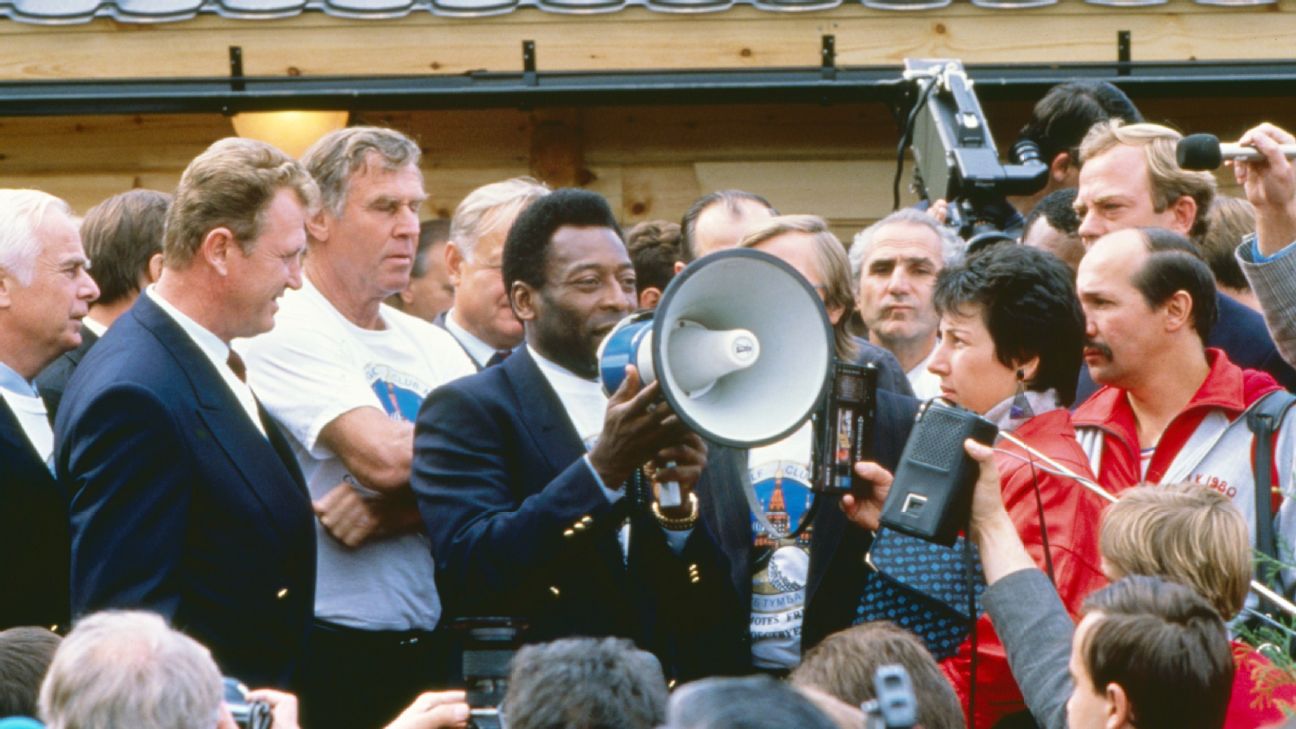 Pele participates in an event and speaks to the press and his fans with a megaphone in Moscow, in the former Soviet Union, in September 1988 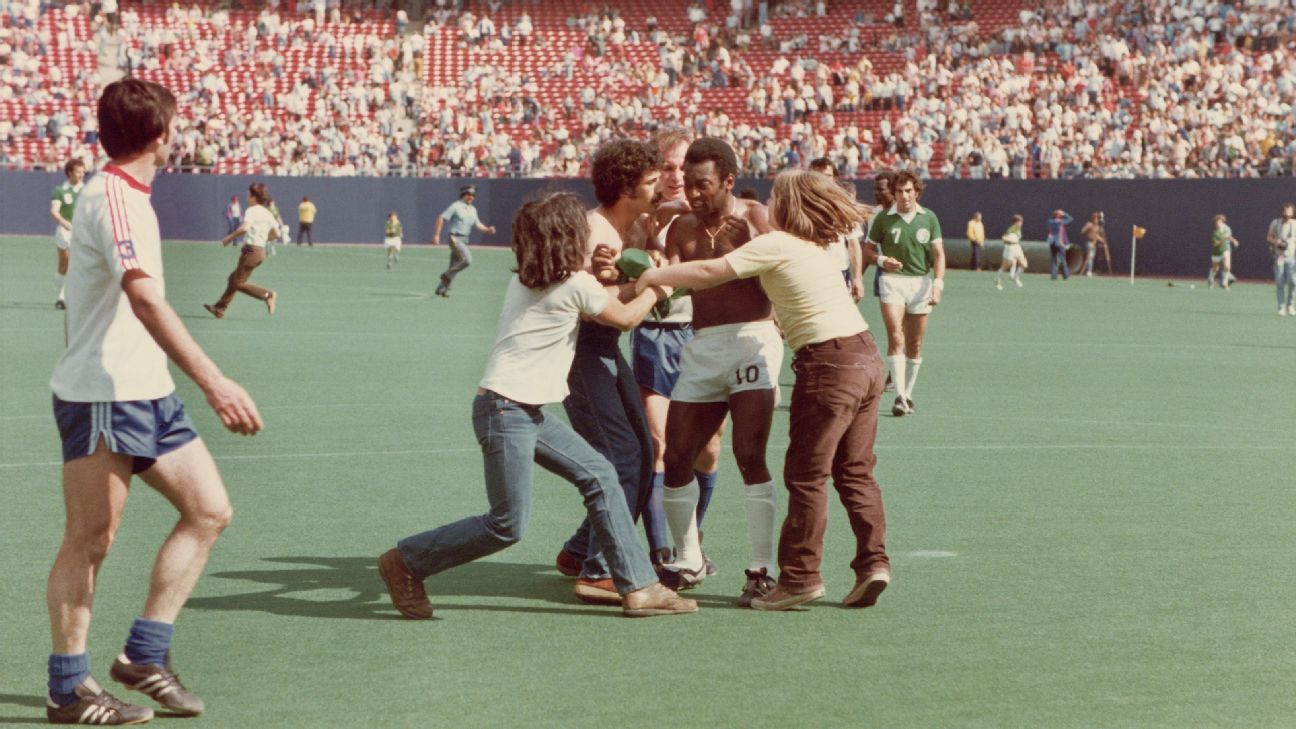 Fans surround Pele after an NASL match at Giants Stadium. 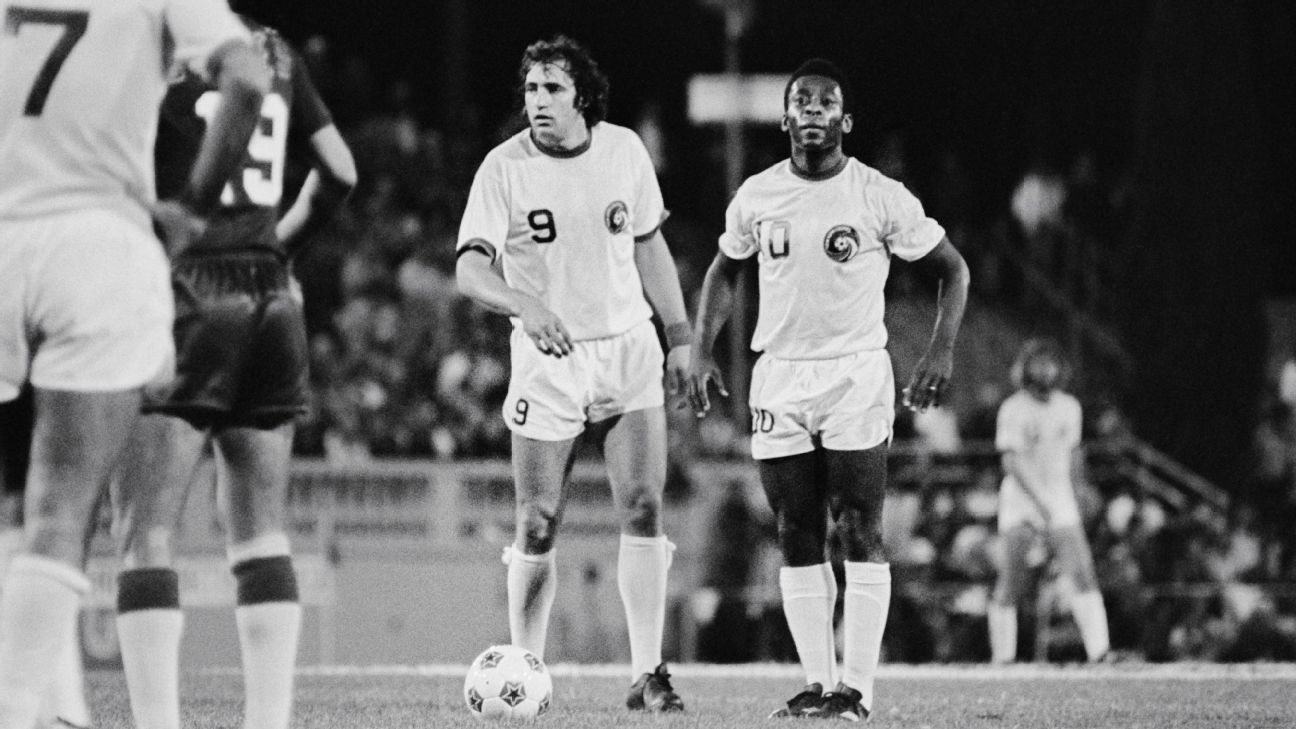 Pele and his Cosmos teammate Giorgio Chinaglia get ready to take a free kick against San Jose Earthquakes in August 1976. 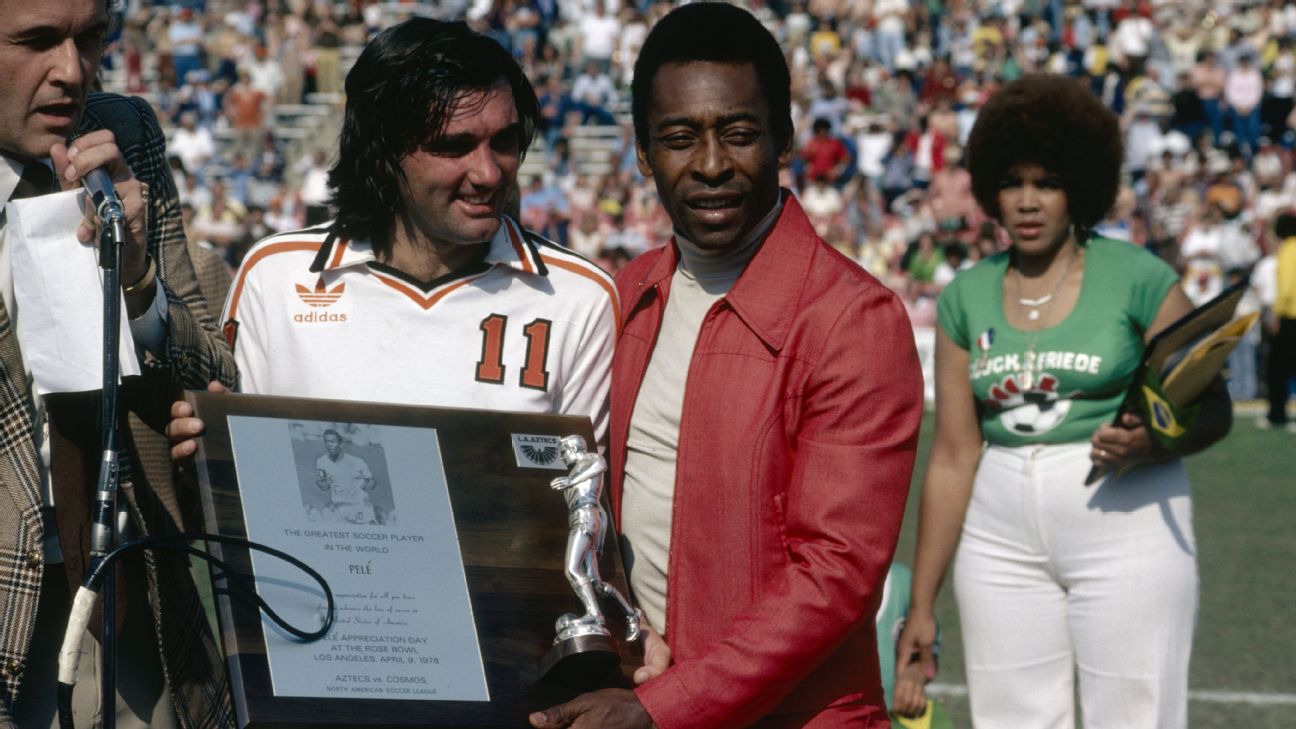 Pele receives a plaque from George Best, which celebrated the Brazilian as the best football player in the world, at the Rose Bowl Stadium in Pasadena on April 1978 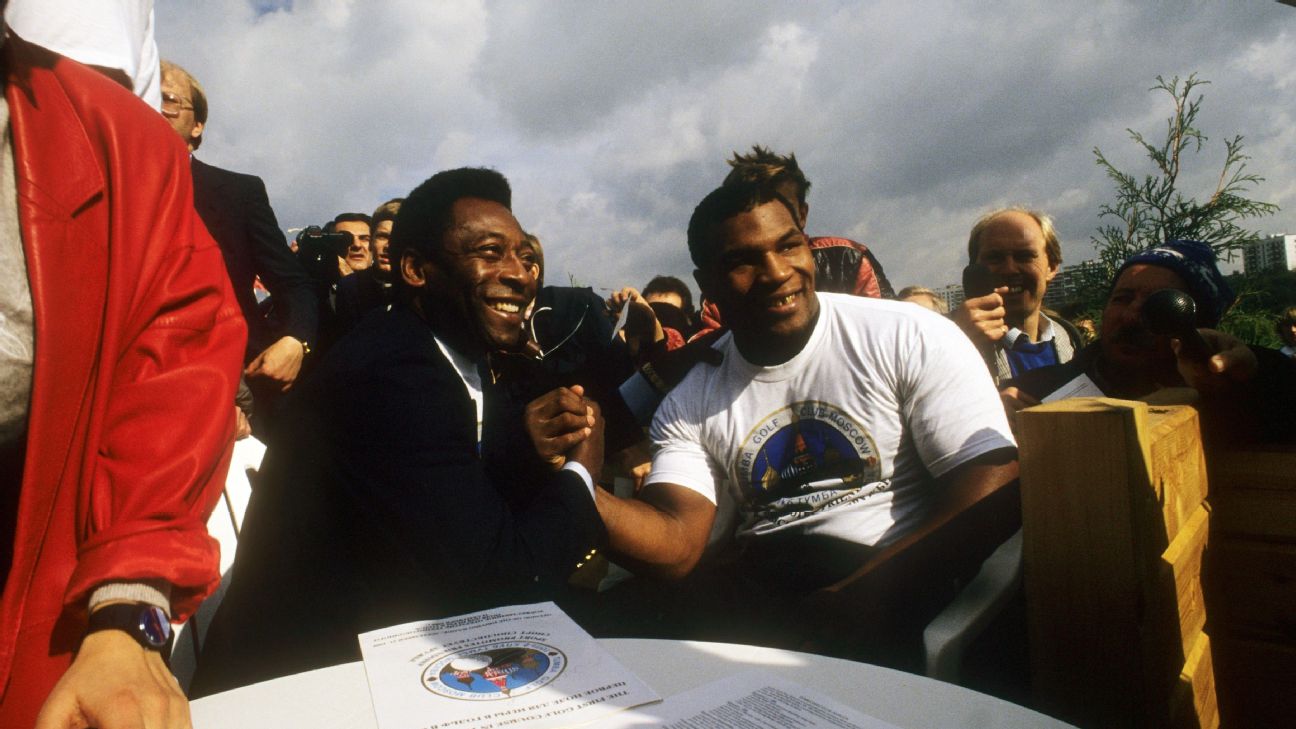 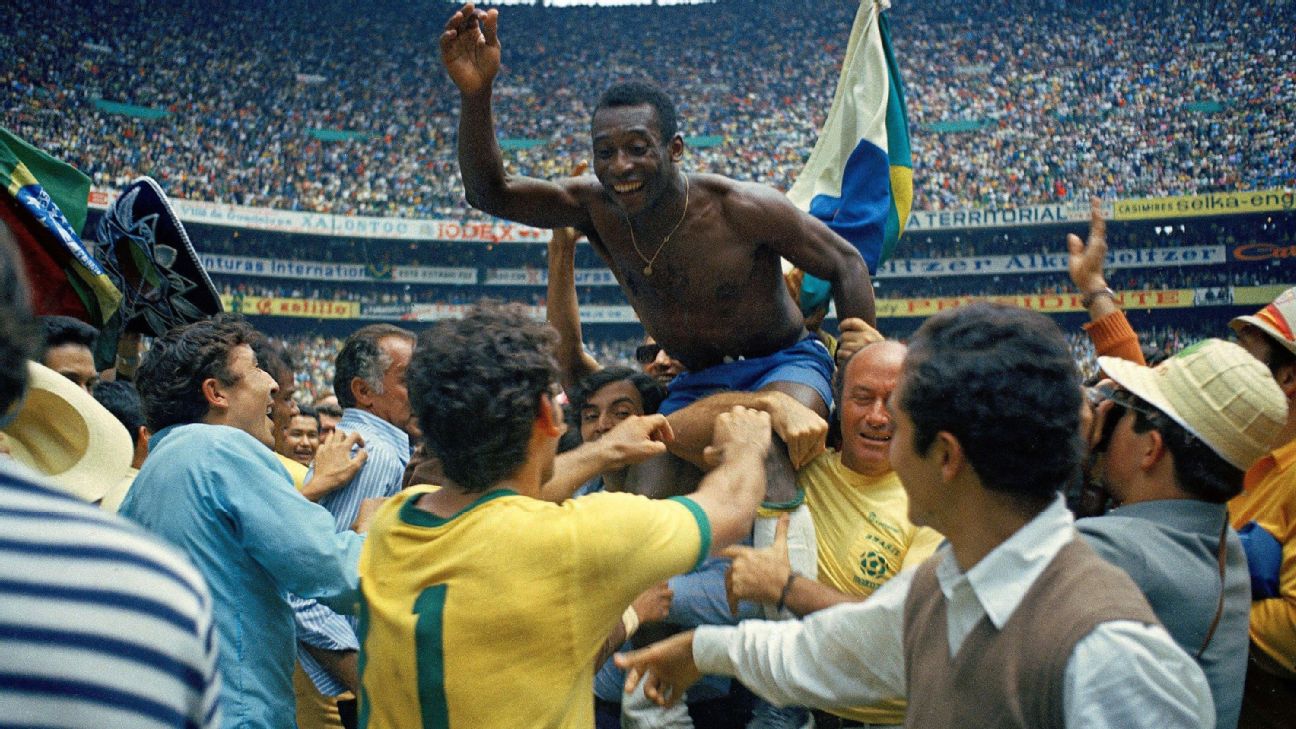 Pele celebrates the 1970 World Cup title at the Azteca Stadium in Mexico, after Brazil's 4-1 win over Italy in the final, as he became the first and only player to this day to win three World Cups.

"After Pele won the World Cup for Brazil and countless trophies with Santos, his move to New York Cosmos seemed out of step, but it ended up being an important decision that helped spark interest in soccer in the United States. Known for his smooth dribbling and accurate finishing, Pele was clearly not the same player in New York he had been at the beginning of his career, but the global star drew thousands of fans see him at Giant Stadium, and he was often just too much for his competition.

"Pele's game seemed to give New Yorkers some kind of relief after a difficult decade for the city. As you can see in these pictures, his matches regularly drew more than 65,000 people -- something unusual even today. Pele's legacy in the world of soccer was cemented long before his tenure with the Cosmos, but his time in New York City seemed to put him in a different stratosphere. He made Americans care about soccer. Several years ago, he told The Guardian: 'It was the best thing I did in my life. I thank God for that because I became better known around the world after I came here.'" 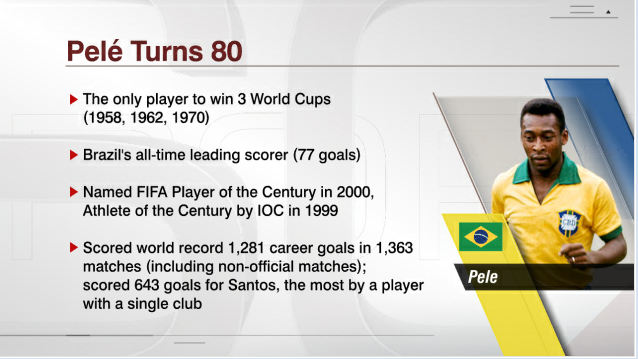 Pele spent his entire career setting records, then breaking them again with his astounding goal-scoring prowess at domestic and international level. Here's a look at some of the more incredible milestones Pele passed over the course of his peerless 21-year professional career.

First and foremost, Pele is the only player ever in history, male or female, to have won three World Cups -- with back-to-back triumphs in 1958 and 1962 and a third in 1970. The legendary striker is practically synonymous with FIFA's most prestigious competition, having appeared at four finals (1966 being the other).

In those four World Cups he scored 12 goals, the fifth-highest tally in tournament history behind Just Fontaine (13 goals), Gerd Muller (14), Ronaldo Nazario (15) and Miroslav Klose (16). However, Pele needed just 14 appearances to score his dozen goals, whereas Ronaldo and Klose took 19 and 24 respectively.

Pele also holds the record for being the youngest scorer in World Cup history; he was 17 years and 239 days when he opened his account with a hat trick against France in the semifinals of the 1958 tournament.

Just 10 days later, he became the youngest player ever to score or even appear in a World Cup final -- 17 years and 249 days -- and duly scored two goals in a 5-2 win over hosts Sweden in Stockholm. Kylian Mbappe is the only other teenager to score in a World Cup final, doing so as a 19-year-old in France's 2018 final win against Croatia.

Pele is also one of a select group of only four players to have scored at four separate World Cup tournaments, the others being Klose, Uwe Seeler and Cristiano Ronaldo. 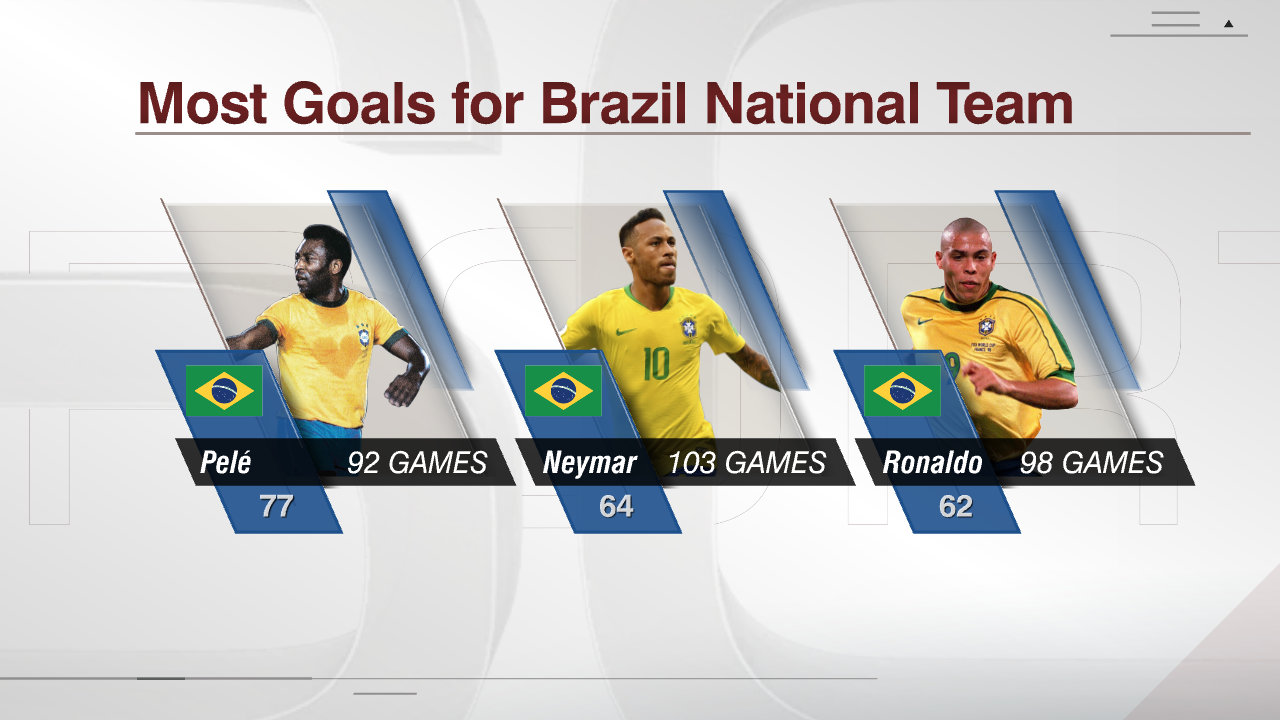 He may have retired from international football in 1971, but Pele is still Brazil's highest scorer almost five decades later.

FIFA named him their Player of the Century in 2000, with almost 75% of the votes from FIFA's own committee and readers of their magazine cast for the Brazilian, although he had to share the accolade with Diego Maradona after the Argentina great won an online poll.

Pele's total of 643 goals in 656 games for Santos between 1956 and 1974 remains the most goals scored by a single player for a single club ever, although Lionel Messi was just seven goals from equalling the longstanding record for Barcelona on the day of Pele's 80th birthday.

After scoring on his senior debut for Santos aged 15 in a 7-1 friendly victory against Corinthians de Santo Andre, Pele went on to win six Brazilian championships, two Copa Libertadores and two consecutive Intercontinental Cups in 1962 and 1963 with the Alvinegro .

He left Santos to join New York Cosmos in 1975, adding a further 37 goals to his grand total in 64 games over two years at the NASL club. He then technically returned to Santos to make one further appearance before retiring, playing the first half of his farewell exhibition game for the Cosmos and the second half for his boyhood club in front of 75,000 fans at Giants Stadium.

The exact number of goals that Pele scored is disputed -- FIFA and the RSSSF agree on a tally of 1,279 career goals in 1,363 games, while Guinness World Records say 1,279. However, counting only goals scored in official matches for Santos, New York Cosmos and Brazil, Pele's career career tally is an incredible 757. Whatever way you slice it, his status as one of the great goal scorers of all time is secure 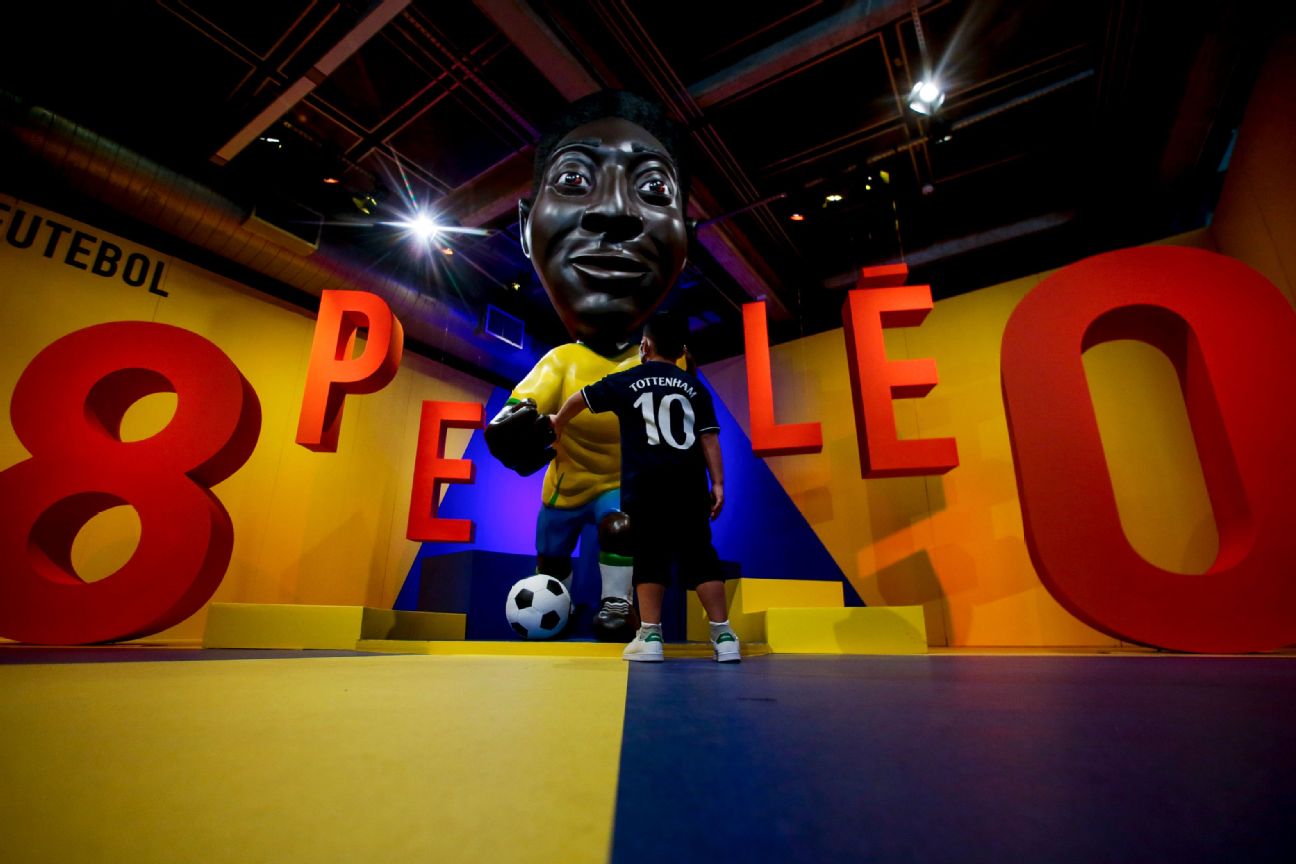 Pele was born Edson Arantes do Nascimento in 1940 and was named after U.S. inventor Thomas Edison (with his parents choosing to drop the "i"), because, says the man himself, "electricity had just been introduced to my hometown in Brazil when I was born."

The Pele nickname came about years later in school after the budding youngster mispronounced the name of goalkeeper Bile, then a teammate of his footballing father. Pele stuck, and while it has no literal translation in Brazilian Portuguese, it does happen to mean "wonder" or "marvel" in Hebrew.

Pele was a trailblazer when it came to endorsement deals for soccer players -- something for which he was lampooned in The Simpsons' famous send-up of soccer -- and he reportedly pulled off one of the first global sporting PR stunts on the biggest stage imaginable in 1970.

Brazil were facing Peru at the World Cup, and just before the quarterfinal kicked off, Pele had the referee delay the start of the game so he could tie up his boot laces on the centre spot.

According to Barbara Smit's book "Sneaker Wars: The Enemy Brothers Who Founded Adidas and Puma and the Family Feud That Forever Changed the Business of Sports," this was a deliberate ruse to allow the cameras to linger on Pele's new signature Puma football boots, knowing that millions of people would be glued to their television sets at that moment.

The book claims that Pele was paid $25,000 for his role in the stunt as part of a bigger deal that saw him endorsing Puma sportswear for the next four years.

One former opponent Pele cherished long after he hung up his boots was England goalkeeper Gordon Banks, after the two men struck up a friendship following their famous meeting during the 1970 World Cup group stage.

It all began when the former saw his goal-bound header saved in miraculous fashion by the latter, and the pair kept in regular contact in the years that prevailed.

After Banks' death in 2019, Pele was moved to commemorate his "magical friend" and said he was glad that Banks saved his header as it kick-started a friendship between the two that lasted decades.

As well as being one of the foremost forwards in world football, Pele also found time to appear in several movies and TV shows, with the IMDB crediting him with 11 roles.

His acting chops range from a star turn as bicycle-kicking army corporal Luis Fernandez in Escape to Victory (1981) to a cameo as himself in "Mike Bassett: England Manager" (2001)

Pele is also known to have a love of music and was regularly photographed strumming away on his guitar while enjoying his down time.

Even now, in his 80th year, Pele is still dabbling in pop music having earlier this week released a song with Grammy award-winning duo Rodrigo y Gabriela called "Acredita No Veio" ("Listen To The Old Man").

Pele himself actually wrote the song in 2005 as an ode to his former coach at Santos, who would blame the players personally if they lost a game but then credit magical forces if they won.

He even took it upon himself to record a special song for the 2016 Rio de Janeiro Olympics called "Esperanca" ("Hope").