On Sunday, Feb. 27, the day after Leeds United were drubbed 4-0 at home to Tottenham Hotspur in the Premier League, Ashleigh Ross asked her nine-year-old son Riley to sit down in the living room for an important conversation. She had been dreading it all day.

Riley has a very rare condition called Wieacker syndrome, and is one of a small handful in the U.K. to have it. Similar to cerebral palsy, Riley uses a metal frame to walk and needs to be fed through a tube in his stomach. He is also non-verbal, using a special iPad at school that reads aloud what he wants to say. At home, his mother can understand his noises. He has such a positive disposition that he would smile after his surgeries.

Riley is a Leeds season-ticket holder, going to games both home and away. His attention span is short, and teachers at his school have begun teaching him maths using the Premier League table. Ashleigh learned at a recent parents' evening that his school has also password-protected his iPad -- instead of using it to respond to teachers, he would surf news websites looking for who Leeds United would sign next, or read stories about the club's iconoclastic Argentine manager, Marcelo Bielsa.

The 66-year-old coach and Riley have a special bond, beginning with a chance meeting at a preseason game at York City in July 2019. Ashleigh and Riley had been walking back to their car, and Bielsa had spotted them from across the car park. He pushed through a crowd to say hello to the boy, picking him up. The moment, captured in photos by bystanders, overawed Ashleigh. 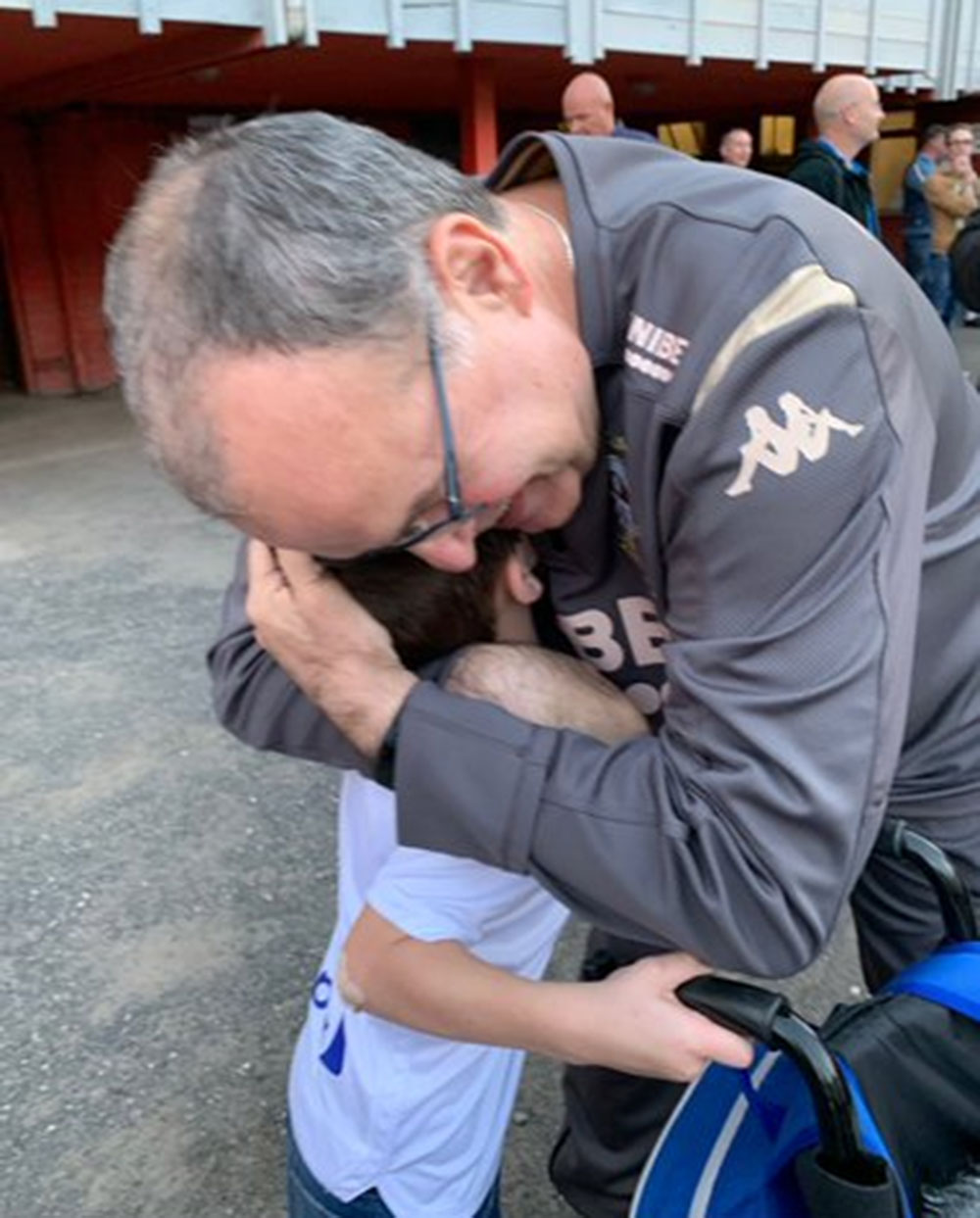 They have met plenty of times since, and Riley, who can't stand without his frame, would often lean back on Bielsa for balance -- now everyone in Riley's family calls him "Grandad Bielsa."

But on this bright Sunday afternoon, bad news was on its way. Leeds, who had enjoyed four monumentally happy years under Bielsa -- including sealing promotion to the Premier League -- had conceded 19 goals in the past month, and were sliding perilously towards the relegation zone.

On Feb. 26, the loss at home to Spurs came hot on the heels of a 6-0 humbling at Liverpool and a 4-2 home defeat to bitter rivals Manchester United. News reports began surfacing that the manager was to be sacked. At 11 a.m. the following day, confirmation came: Bielsa was gone.

Ashleigh decided to play it straight.

Riley, often a ball of happiness, began to cry.

Metaphorically speaking, so did the city of Leeds.

Bielsa holds a special place in the hearts of people in Leeds. In 2018, he arrived with the reputation of a maverick, having managed 10 clubs in places like Argentina, Mexico, Spain and France, and earned himself the nickname "El Loco" ("The Crazy One") for his motivational style and explosive character. When he arrived, Leeds, who were one of the biggest clubs in the country in the late 1960s and early 1970s and were last champions of England in 1991-92, were adrift in the EFL and had been since they were relegated in 2003-04. Within two seasons, Bielsa had improbably guided the club back to the Premier League for the first time in 16 years.

"He made people believe that Leeds United was special again, and he did it with his integrity," the co-owner of the Elland Road pub The Old Peacock, Jamie Lawson, tells ESPN.

Everyone in Leeds seems to have a Bielsa story. The club has enjoyed its best success in over a decade, but the man in charge did so with fans in his mind. Nothing was too much to ask. Once, a fan sent Bielsa a WhatsApp message to tell him about a boy whose mother had cancer. The fan asked if he could do something to cheer him up. Immediately, Bielsa wrote back, telling him to bring the boy to the club's training ground where he would sign every bit of merchandise he could find. He also asked for the family's phone number, so he could call the boy and ask how he was.

For 3 years I have brought Marcelo his favourite tea and biscuits from Argentina 🇦🇷 & Chile 🇨🇱. I always left them on the door handle of his flat, knocked and left. Today he called at my house to say thank you and goodbye. It meant the world to me. Adios amigo 👋🏻 #lufc #bielsa pic.twitter.com/sHCBmoclWK

"Nothing was ever too much for Bielsa," says Jamie Ralph, who runs the English language Twitter account for Newell's Old Boys (Bielsa's hometown club in the city of Rosario) and would hear constant stories of Bielsa's kindness. "He's meant to be a football manager. I have no idea how he found time for it all."

Bielsa is renowned for living a modest life, sitting down in his club tracksuit for a cup of coffee in a local chain in Leeds and walking for 45 minutes through the city to training each day.

Last season, the club's first back in the Premier League, Bielsa achieved a ninth-place finish. But, amid an injury crisis and a tactical stubbornness, this season was different. A slide toward a relegation battle was deemed too much and, after the Spurs' defeat, their fifth straight loss during a six-game run in which they conceded 21 times, Jesse Marsch, the exciting American coach, was handed the reins. The response to pay tribute to Bielsa began immediately.

Within an hour of the news of his departure, around 100 fans gathered at the statue of 1970s legend Billy Bremner, singing Bielsa's name. The Old Peacock pub, which sits across from the stadium and originally gave the venue its name before it was called Elland Road, later announced it would be renamed "The Bielsa" until the end of the season.

The Leeds United Supporters' Trust launched a digital platform called "Gracias, Marcelo" and, within the first hour, its website manager had to turn off his phone to stop its buzzing. Over a 1,000 messages had been posted within the first 24 hours since Bielsa's sacking. Virtually every response is a variation of the same message, each a loving appreciation of a football manager's impact on a city.

"In essence, it's become a virtual condolence book," Trust chairman Peter Emmerson tells ESPN. "It's somewhere Leeds fans can write their feelings and thoughts about Marcelo, and help their grieving process."

The English-language website of Newell's Old Boys -- the club where Bielsa briefly played, then coached to three consecutive league titles and has had the stadium named after him -- ran out of Bielsa jerseys the same evening. They've been trying to get merchandise to be shipped from Argentina ever since.

On Monday afternoon, Ashleigh picked Riley up from school. She had heard about the Trust's message board and thought it would be good for Riley to send his own message of thanks. All the messages already submitted were written submissions. They decided it had to be a video message, with his iPad reading it out -- that way, the message would truly be from Riley.

Ashleigh helped him type it out, then pressed record on her phone.

"Hello, my name is Riley. I want to say thank you to Marcelo for everything. You picked me up out of my wheelchair and gave me the biggest hug. I'm sad to see you go, but thank you for giving me the best memories.

"Lots of love from your biggest fan, Riley."

Then he looks down the camera lens, pumps the Leeds badge on his chest and blows a kiss to the camera.

This is season ticket holder Riley, aged 9, he doesn't speak and the only way of communicating is through his iPad. He desperately wants us to get this special message to Marcelo after he stole his heart by getting out of his car to pick him up and hug him! Let's do it! pic.twitter.com/f5zM66n4T9

The Supporter's Trust accepted the video message among the thousands of written notes, and tweeted the video. Ashleigh, who is training to be a paramedic and had to wake up for an early shift the next day, was woken by a call from her brother at 11.30 p.m. that night to say Riley's message had gone viral.

By the following weekend, Riley had said he didn't want to go to the match against Leicester City, which was to be new manager Marsch's debut. Ashleigh had to plead with him to go.

"They need your support, otherwise they might go down," she told him. Riley, begrudgingly, went along. Leeds lost 1-0, and were then defeated 3-0 by Aston Villa on Thursday in their first home game since Bielsa's departure. They remain two points and two places above the bottom three with 10 games left to play, but they face a real battle to avoid relegation.

Other messages to the Trust's message board continued to pour in from all over the world. In the following six days, the message board had over 11,000 submissions from 120 countries across almost every continent. Even the Supporter's Trust, who have their finger on the pulse of how Leeds fans feel, have been stunned by the response.

"We're totally surprised," Emmerson tells ESPN. "What's grabbed me in total has been the amount of love and respect for an individual."

Staff at the Trust asked around and were given Bielsa's address in Rosario. They plan to create a single hard-copy book with all of the messages and send it to Bielsa's home.

Riley's message will be front and centre and when Bielsa opens the book, he'll be greeted by its title: "Gracias, Marcelo."