When it comes to scoring goals this season, few are doing it with more regularity than RB Leipzig star Christopher Nkunku. Though nominally a winger by trade, the 24-year-old Frenchman has been outscoring most of the top strikers in Europe so far, with 25 goals for his club in 37 games in all competitions.

After signing from Paris Saint-Germain for €13 million in the summer of 2019, Nkunku pitched in with a respectable, if unremarkable, tally of 12 goals during his first 84 games for Leipzig spread across his first two seasons in Germany. However, after failing to score in his first four outings this season, he got things underway in the fifth -- opening his 2021-22 account with a hat trick against Manchester City in the Champions League group stage, only to still end up on the losing side in a 6-3 defeat.

Since then, Nkunku has maintained an impressive average of one goal every 1.6 games for Leipzig, who sit sixth in the Bundesliga table, two points behind fourth-placed Hoffenheim and some 18 points adrift of Bayern Munich at the summit. 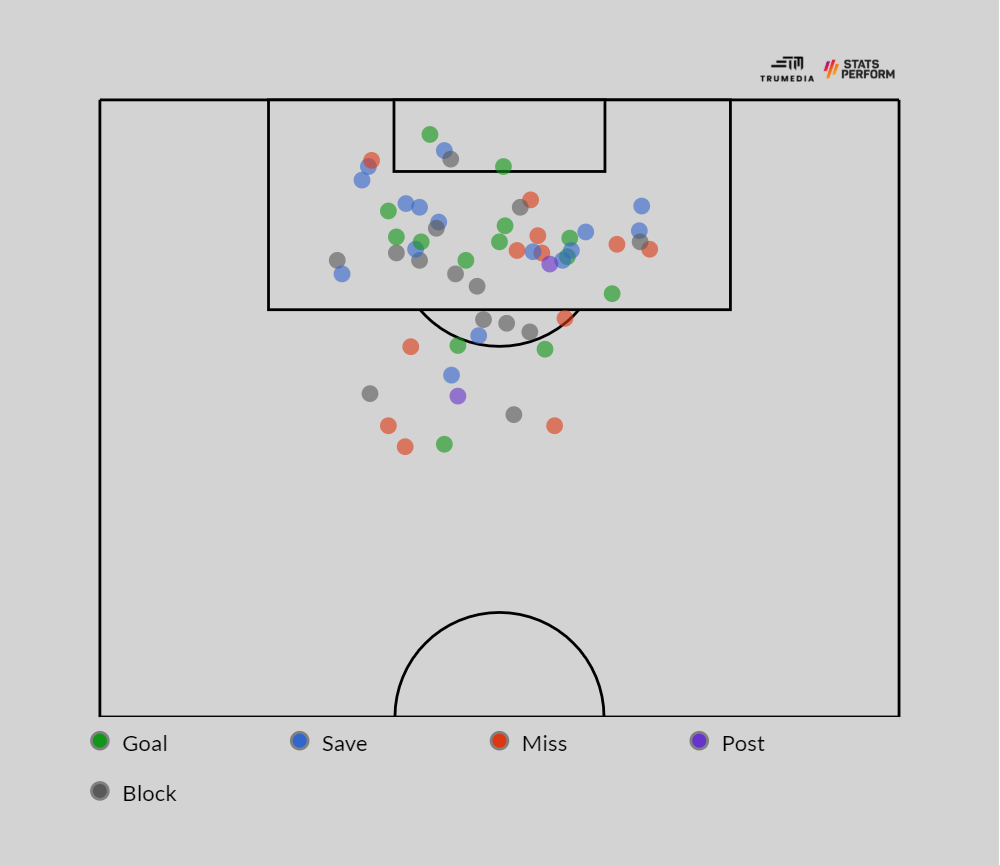 (A shotmap of Christopher Nkunku's 14 goals in 25 games in the Bundesliga.)

The six-time France U21 international ramped up his individual output by several orders of magnitude, even registering in big domestic matches against the likes of Bayern and Borussia Dortmund, as well as Champions League games against continental heavyweights such as City and Paris Saint-Germain. That has Manchester United on his trail for a possible summer transfer, according to ESPN sources.

Across Europe's top five leagues (English Premier League, Spanish LaLiga, German Bundesliga, Italian Serie A and French Ligue 1), in fact, there are only four players who have more goals.

Editor's Note: Aleksandar Mitrovic of English Championship team Fulham (34 from 34), Ajax's Sebastien Haller (31 from 31) and Thijs Dallinga from second division Dutch side Excelsior (29 in 29) would all feature in this list if it was broadened out.

Bayern Munich's Robert Lewandowski (39 goals from 34 games) is alone at the top with his incredible haul.

Next up is Karim Benzema of Real Madrid (27 in 32) and the only other non-central striker, Liverpool's Mohamed Salah (27 in 33). And, finally, Lazio's Ciro Immobile (25 in 32) stands alongside Nkunku for goals, but has done so in fewer games.

Still, Nkunku currently has more goals to his name than many of Europe's best and most established out-and-out strikers, several of whom are evidently struggling to keep pace with the prolific forward.

Enjoying another excellent season, Mbappe has amassed 24 goals in 34 games for Paris Saint-Germain in all competitions so far, including a prolific run of seven goals in his last eight league appearances for the Ligue 1 leaders.

One of European football's most exciting young goal scorers, Vlahovic has racked up 24 goals in 32 games in all competitions this season, with four goals in eight games coming since his €70m transfer from Fiorentina to Juventus in January.

With 23 goals in 20 appearances, Haaland can still boast an incredible scoring rate of more than one goal per game for Borussia Dortmund this season despite having his 2021-22 campaign utterly derailed by injury.

After a comparatively slow start to the season that saw Kane score eight goals in his first 22 appearances for Tottenham (six of which came in the preliminary rounds of the Europa Conference League), things gradually began to pick up around the turn of the year and Kane now has 20 goals in 38 games. Indeed, after notching only once in his first 13 Premier League appearances this campaign, Kane has upped his game since the start of December and now has nine goals in his last 12 outings under Antonio Conte.

After finishing last season with six goals in 49 games for Real Madrid, the young Brazilian has flourished this time around to score 16 times in 36 appearances to date.

Though perfectly fine by the standards of mere mortals, both Ronaldo and Messi have endured relatively underwhelming seasons in front of goal, with the latter in particular having scored only twice in Ligue 1 since his seismic free transfer to Paris Saint-Germain last summer.

Overall, Ronaldo has 15 goals in 31 game in his second stint at Manchester United, while Messi is lagging behind with seven goals in 24 games for PSG.

Just to further compound their plights, both Ronaldo and Messi have also managed to accrue fewer assists than Nkunku in all competitions so far this season. The RB Leipzig winger has laid on 13 goals for his teammates, in comparison to Messi mustering 11 and Ronaldo three.