After 5½ years at Manchester City, Gabriel Jesus will begin a new chapter in his Premier League career after completing his £45 million transfer to Arsenal this summer.

Jesus signed for City from Palmeiras in the summer of 2016 for around £30m but didn't join up with his new team until January 2017, when the 19-year-old was finally freed up to make the switch to the Premier League.

He first arrived at the Etihad as an energetic, versatile, all-action forward who had scored 26 goals in 67 senior appearances for his boyhood club prior to joining City. He leaves having scored 95 goals in 236 games in all competitions (and also registering 46 assists) while playing his part in four Premier League title wins, one FA Cup, three EFL Cups and a run to the 2021 Champions League final.

However, the Brazil international was restricted to just 20 starts in the league last season, and while he still pitched in with eight goals and nine assists, the time is obviously right for Jesus to seek a fresh challenge elsewhere -- especially with City bringing in Erling Haaland from Borussia Dortmund this summer.

During his early career at City, Jesus was mainly deployed as a specialist goal poacher in a central role. He was undoubtedly effective, and quickly made a habit of scoring from close range with one-touch finishes. In fact, only one of his first 14 Premier League goals was scored from more than 8 yards out, and that was a penalty against Leicester in May 2017.

Since then his game has evolved and Jesus has adapted to become a much more rounded, Pep Guardiola-style forward, playing off either flank or down the middle when required. As such, he has added many more adept passes, touches in the penalty area, assists and even goals from outside the box to his repertoire.

With the 25-year-old on his way to the Emirates, here are the stats for Jesus' goal contributions and all-round play and a season-by-season look at precisely how Jesus has changed his game.

A 19-year-old Jesus first started life at City operating mainly as a classic out-and-out No. 9, specialising in instinctive bursts of movement, close-range manoeuvering and one-touch finishes.

His very first goal for the club emphasises the point, with the striker opening his account by scoring City's third goal in a 4-0 victory over West Ham at the London Stadium on Feb. 1, 2017 -- a tap-in from the edge of the 6-yard box to finish off an incisive passing move, i.e. the textbook Guardiola goal. 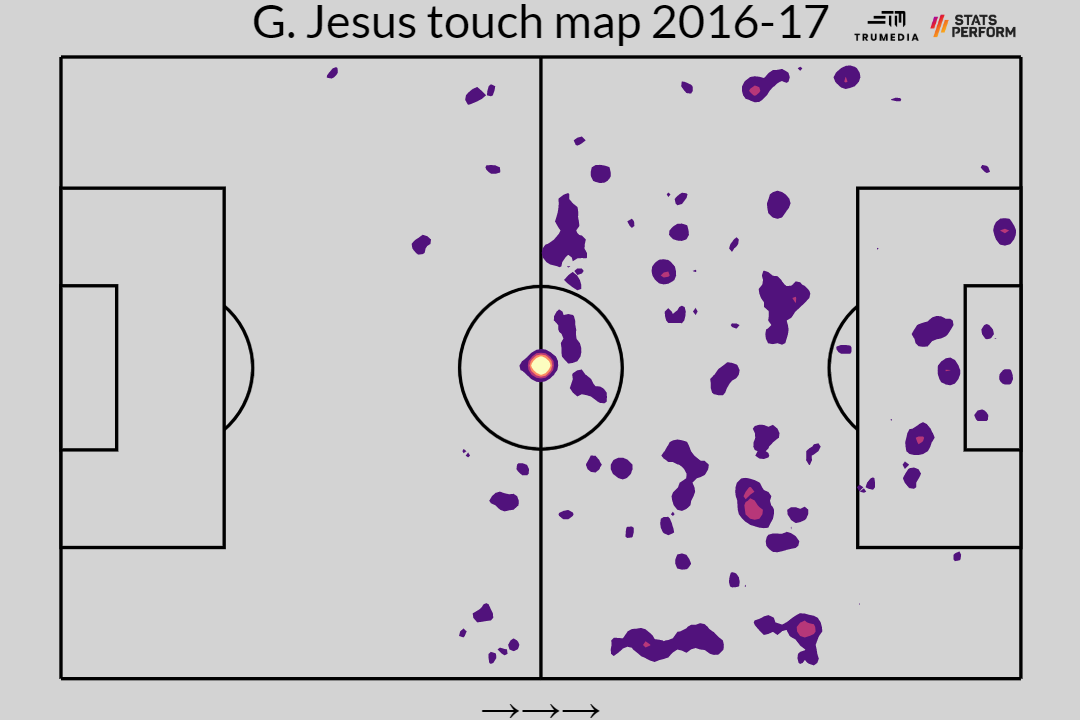 In his first half-season, Jesus continued in much the same vein and ended the 2016-17 campaign with seven goals in his first 11 games for City. While two of those goals came via his left foot, four via his right and one via his head, all seven of them were scored from inside the penalty area.

Jesus' first full season under Guardiola at City saw the forward make 42 appearances in all competitions, with 34 of them coming as a central striker.

Demonstrating an impressive efficiency in front of goal, Jesus scored 17 goals in all competitions from an xG rating of just 17.72. Once again, all 17 of his goals came from inside the box (eight from inside the 6-yard box). He also averaged just 4.2 touches of the ball inside the penalty area per 90 minutes -- the lowest season tally of his City career.

As well as returning his lowest single-season pass completion rate (80.3%), the Brazilian also completed fewer dribbles per game (0.8) and registered fewer assists (three) in 2017-18 than during any other season he spent at the Etihad, thus demonstrating the heavy emphasis on goal scoring rather than goal creation.

Jesus' crowning moment of the 2017-18 season came in the 94th minute of the final league game of the season when he scored deep into stoppage time to secure a narrow 1-0 victory over Southampton. City were already champions by that point, but the Brazilian's strike ensured that Guardiola's side became the first in history to reach 100 points in a top-flight campaign, leading to them being dubbed the "Centurions."

City powered to a domestic treble in 2018-19 by winning the Premier League, FA Cup and League Cup as Jesus improved on his output once again by scoring 21 goals and creating seven assists in 47 games across all competitions. While used as an auxiliary left winger on a smattering of occasions, the Brazilian was mostly deployed at the spearhead of City's attack and averaged a goal every 107.3 minutes he spent on the pitch as a result.

Jesus also significantly diversified his means of goal scoring by notching four goals with his left foot, 11 with his right and six with his head. His hat trick against Shakhtar Donetsk in the group stages of the Champions League is also notable for containing, along with two penalties, the one and only goal Jesus ever scored for City from outside the 18-yard box. When you look at his delicious 20-yard lob, scored in the 92nd minute, you wonder why he didn't score more.

🔵 2019/20: when Gabriel Jesus became the second player to score in both legs of a #UCL knockout tie against Real Madrid for an English side...@ManCity | #UCL pic.twitter.com/C0eWR049Au

The season after that treble proved to be the most prolific season of Jesus' City career, thanks at least in part to a succession of injury issues that regularly kept first-choice striker Sergio Aguero out of contention. Jesus capitalised and scored 23 goals in 53 games for City -- his best return for the club -- while also chipping in with 11 assists.

While City had to make do with the EFL Cup as their only silverware after finishing runners-up behind Liverpool in a COVID-mired Premier League campaign, their Brazilian striker achieved several career highs in statistical terms. 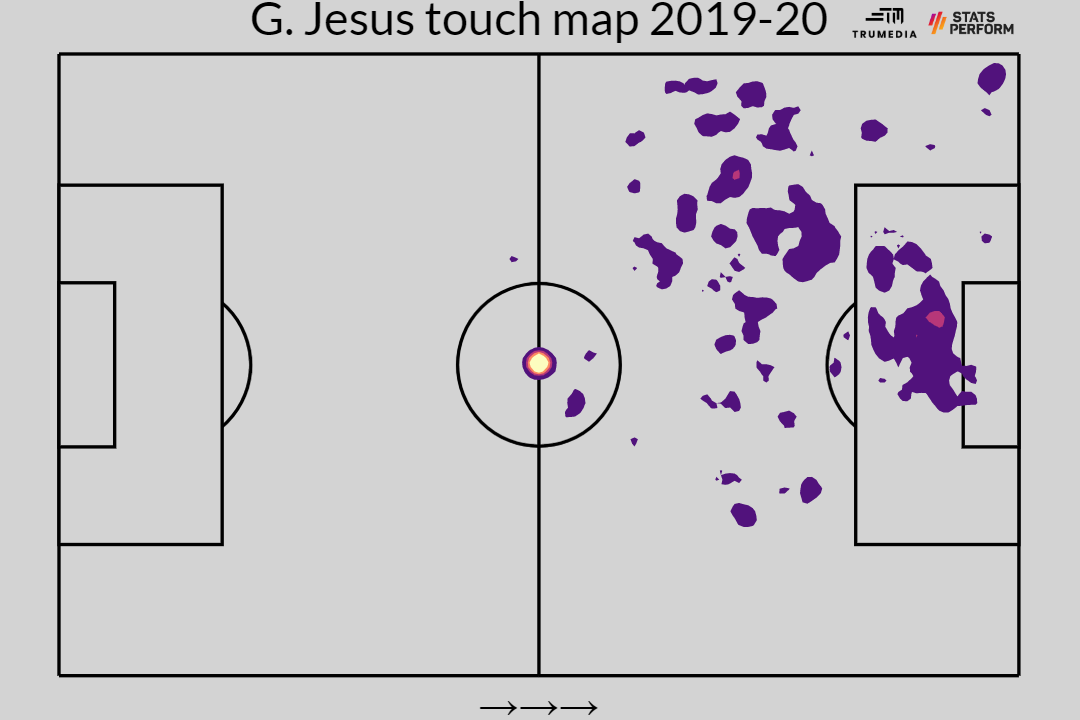 As well as his best goal and assist return, Jesus enjoyed more touches inside the area per game (5.7) and a better pass-completion rate (85.9%) than at any other point during his City stint, and also saw his average completed dribbles rank rise to 1.3 per game -- signifying the beginning of a subtle shift in his style of play.

Jesus also became only the second player in Champions League history to score for an English club in both legs of a knockout tie against Real Madrid after Ruud van Nistelrooy did likewise for Manchester United in 2003-04.

Minor injuries, a positive COVID-19 test and a suspension all combined to reduce the amount of time Jesus spent on the pitch throughout 2020-21, with his stats suffering accordingly. The striker made just 42 appearances for City in all competitions (down from 53 the previous season), scored 14 goals and laid on four assists -- his lowest goal contribution return in any of his five full seasons at the Etihad.

Exactly half of Jesus' 14 goals were scored at close range inside the 6-yard box -- five with his left foot, seven with his right and two with his head. Compounding his struggles, the striker's average for touches inside the area fell almost 20% from 5.7 per game in 2019-20 to 4.7 per game in 2020-21.

On the upside, the Brazilian's total of 14 goals were scored from an xG rating of just 14.2, his pass-completion rate remained steady (84.6%) and he also successfully completed more dribbles on average (1.6 per 90 minutes) than during any other season at the Etihad. In short, he carried and moved the ball more effectively in the build-up of attacks, but at the cost of being in the right place at the right time to convert chances. The fact that midfielders Ilkay Gundogan (17 goals), Phil Foden (16) Raheem Sterling (14) and Riyad Mahrez (14) emerged as the club's top goal scorers in 2020-21 suggests a more holistic approach to sharing the goals around.

City once again shared the goals around in 2021-22, with Mahrez emerging top of the club's scoring charts in all competitions with 24 goals to his name, followed by Kevin De Bruyne (19) and Sterling (17). Jesus made the fewest appearances for City (41) in any of his five full seasons at the Etihad and also amassed his lowest goal tally (13), though he was able to ramp up his assist count to a joint-high of 11.

Jesus' reduced participation will have naturally had a negative effect on his productivity in terms of goal contributions, but it is perhaps worth noting that he enjoyed a spike in average touches inside the area (5.8 per game -- a career high), pass completion (85.1%) and minutes per assist (233.7 -- again, a career high). 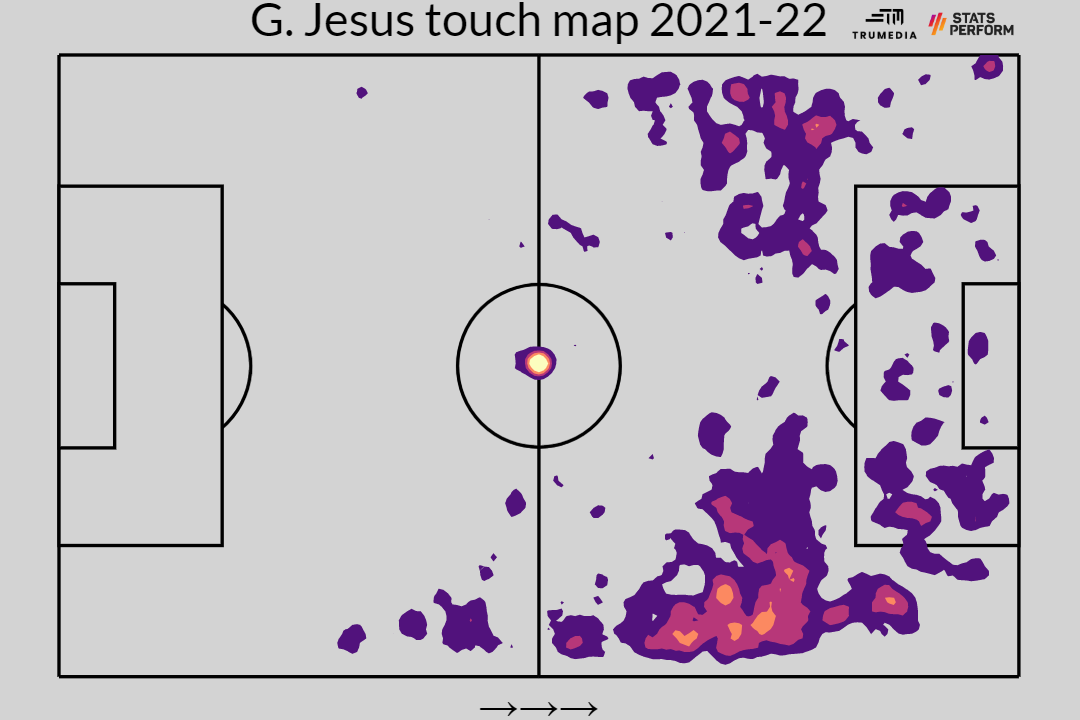 Last season saw Arsenal ship Pierre-Emerick Aubameyang out of the club on a free transfer to Barcelona in February, Aubameyang having been stripped of the club captaincy and frozen out of the squad two months earlier, while Alexandre Lacazette left as a free agent in a more dignified exit when his own contract expired at the end of the campaign.

Given that the Gunners' top scorer in all competition in 2021-22 was 19-year-old winger Bukayo Saka (12 goals), and that only three members of Mikel Arteta's squad successfully reached double figures in terms of goals, the Gunners will no doubt be hoping Jesus can revert back into the ruthless poacher of yesteryear.

Whether the Brazilian is able to bring those qualities back to the fore and re-adapt to life as a penalty-box predator capable of scoring 20-plus goals a season remains to be seen. Perhaps a mix of both wouldn't be a bad thing either, especially as the Gunners aren't overly blessed with an abundance of seasoned, Premier League-proven goal scorers.

Young academy product Eddie Nketiah has been rewarded for his late-season form -- when he scored five goals in the final seven games -- with a new contract, but the 23-year-old is still far from the finished article. And, with Fabio Vieira joining the ranks of attacking midfielders and wide forwards at Arteta's disposal, actually having someone in the area to finish chances with reliable regularity will be key to Arsenal's hopes of finishing in the top four next season. No pressure, Gabriel.