If you had to guess, you could probably get most of the names. Over the past 10 years, who would be on the top 10 for most shots attempted in a single Premier League season?

The list doubles as a pretty good summation of the most impactful players in the league over that span. There's Luis Suarez, who is on there twice. Wayne Rooney is on there. So is Cristiano Ronaldo. The two defining Chelsea players of the era, Frank Lampard and Didier Drogba, both make appearances, as do Gareth Bale and Robin van Persie. All legendary figures, able to prop up the attacks of some of the best teams in the league, all on their own.

You know who else belongs in that group? Harry Kane -- or, at least, he used to.

- ESPN's Ultimate XI: This team would win everything
- Ian Darke: What could derail Man City and Liverpool this season?
- Graham Hunter: The legend of Samuel Eto'o

A couple of weeks ago, I picked Kane as the best attacker in the league for the '16-17 season. That year, he became one of only six players this decade to break the 1.00 non-penalty-goals-plus-assists-per-90-minutes mark. Had Mohamed Salah not put together the best non-Luis Suarez attacking season in Premier League history, I would have picked Kane for the next year, too. With his 28 non-penalty goals, Kane has been surpassed by only Suarez and Salah (31) in this decade. His two-season total of 52 from 2016 to now is the best back-to-back run of the past 10 years; the same is true if we extend it back to a third year. He scored 72 non-penalty goals from 2015 through 2018, and no other three-season run comes even close.

At the end of the '17-18 season, Kane was just 25, with years left of his prime. Although Tottenham hadn't won a trophy, Kane's ascension coincided with Spurs rising into the Premier League top four and staying there. He'd already become a legendary, talismanic figure, winning two Golden Boots in a row. The season that snapped his streak doubled as one of the best individual goal-scoring seasons in league history.

Kane was a bona fide superstar with the potential to get even better. Like Lampard, Rooney and Steven Gerrard before him, he'd become the kind of player continental giants like Real Madrid and Barcelona would soon try to pry away from the Premier League.

Except Kane hasn't been that player since the 2018 season ended, and perhaps even before then.

Last season, Kane scored 13 non-penalty goals, a total that's been matched by the likes of Yakubu, Gabriel Agbonlahor, Andy Carroll, Peter Odemwingie and Grant Holt. Given Tottenham's lackluster performance in the second half of the previous Premier League season and their struggles to start the 2019-20 edition, there are plenty of questions surrounding the future of their manager, Mauricio Pochettino, and ever-present stars such as Christian Eriksen, Jan Vertonghen and Toby Alderweireld, who all have just a year remaining on their contracts. But the most important question for the club going forward might actually be this one: What are they going to get from Harry Kane?

Here is Kane's season-by-season goal and expected-goal production, per 90 minutes: 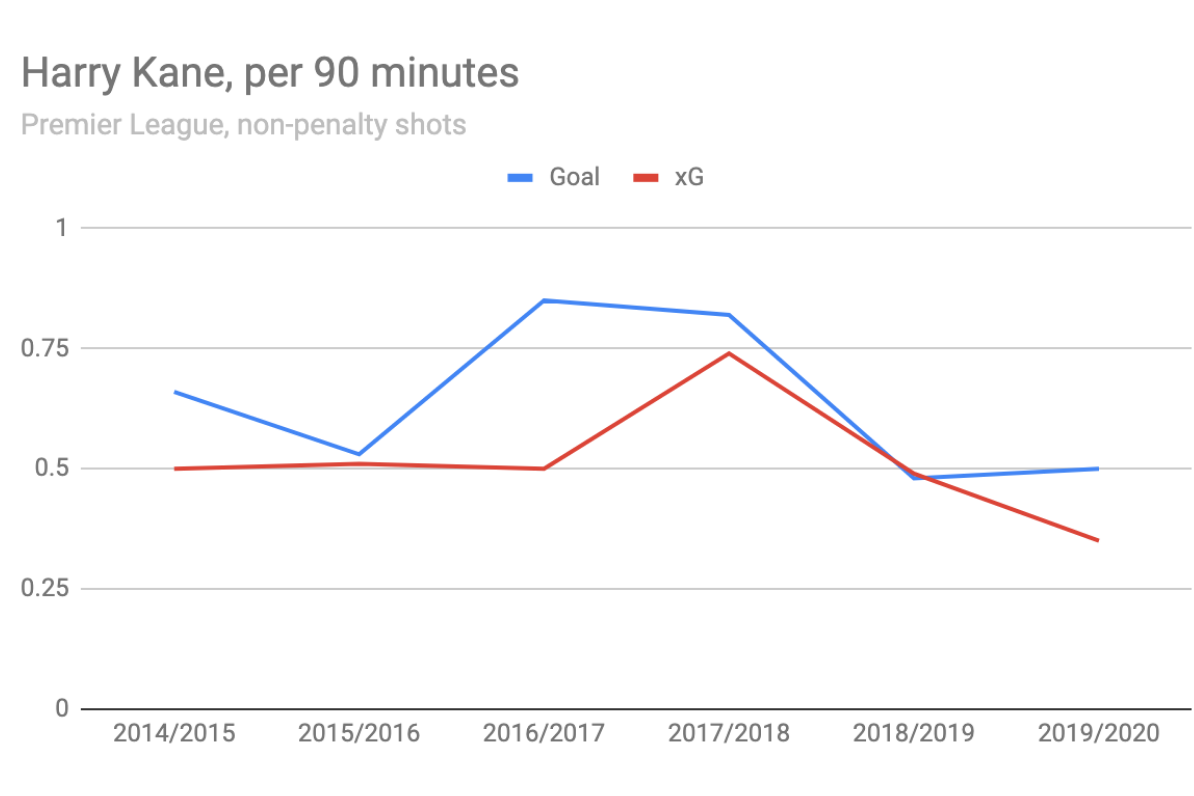 And here's his shot output: 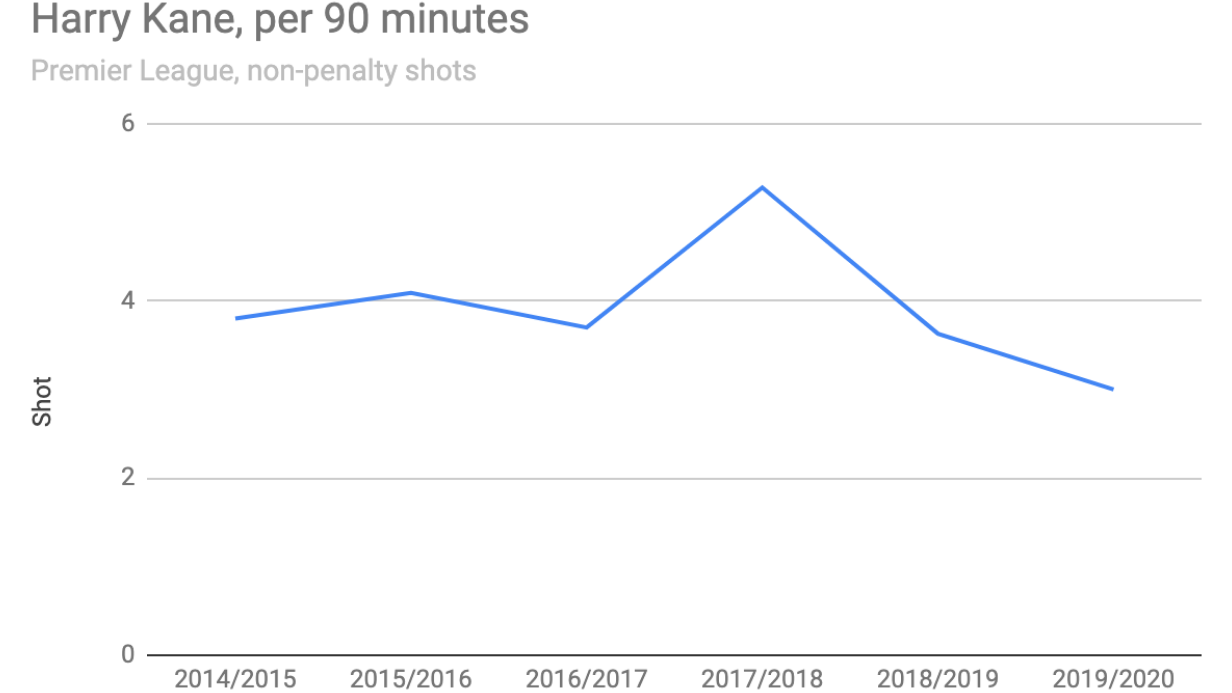 What can we take from this? Outside of 2017-18, Kane's underlying performance has remained impressively consistent. In his four other full seasons as a starter (not counting this partial season) he took around the same number of shots of roughly the same quality. The reason that 2016-17's goal-scoring efficiency matches, and actually improves on, '17-18 is that Kane couldn't stop picking out the corners.

According to TruMedia's post-shot xG model, Kane's shooting (i.e., where he placed the ball on the goal frame) added a whopping 0.2 xG to his shots per 90 minutes. Finishing, though, is unpredictable from year to year and most players regress toward their xG numbers, so Kane was able to reach the same heights the next year because of the massive increase in shots. The year before produced world-class results on an unsustainable process, and it seemed as if he'd figured out a way to make the results stick.

That, of course, hasn't happened.

Just look at the massive drop-off after the 2017-18 season. Last season, Kane posted the lowest non-penalty shot, goal and xG rates of his career. Per 90 minutes, he took the fifth-most shots in the league, registered the ninth-most xG and scored the 12th-most goals. He has played only 360 minutes so far this season, but they haven't provided any signs that the trend lines will start pointing in the other direction, as his shots and xG per 90 are both significantly lower than they were last year.

This is Kane's shot map from the '17-18 season. Green dots are goals, and the bigger the dot, the higher the xG: 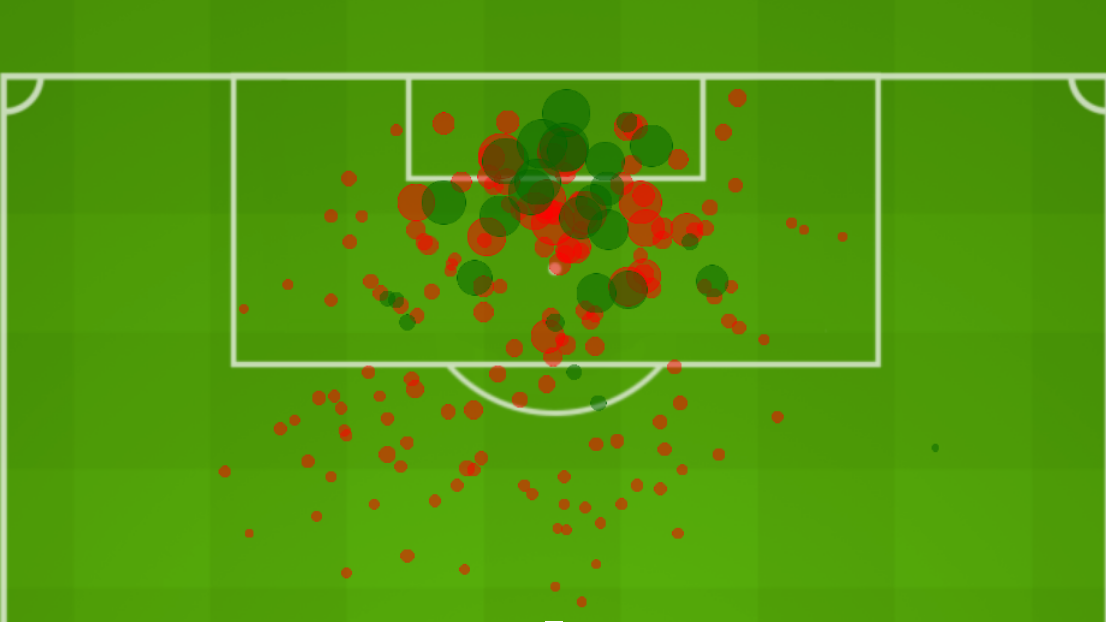 And this is how last year and this year have looked, combined: 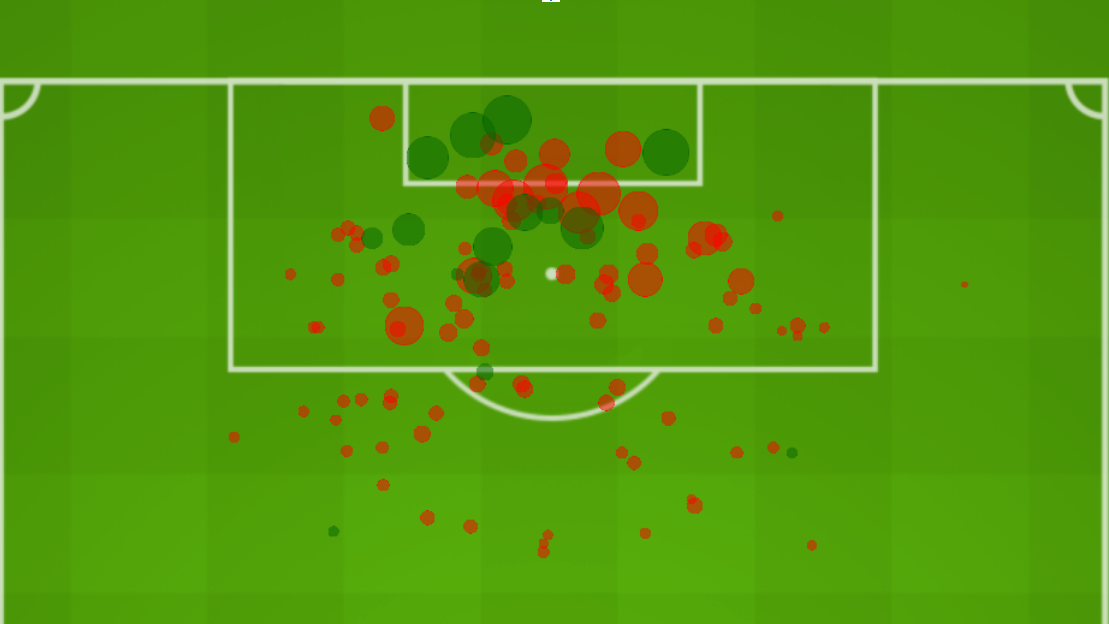 Translating the above, Kane has cut down on the shots from outside the box, which is probably a good thing given how few of them have gone in. And he's still getting a healthy number of chances from the edge of the six-yard box and in. Except, superstars can't subsist on a "tap-ins only" diet. So many of Kane's shots between the six- and 18-yard box have disappeared. Those shots are hard to get, given how that area is always packed with bodies, but basically every elite goal scorer consistently finds a way -- whether through intelligent off-ball movement, tight-area footwork to create space, a quick release to get off a shot or all three -- to produce a high volume of attempts from that space.

For reference, take a look at Robert Lewandowski's shot map from last season in the Bundesliga: 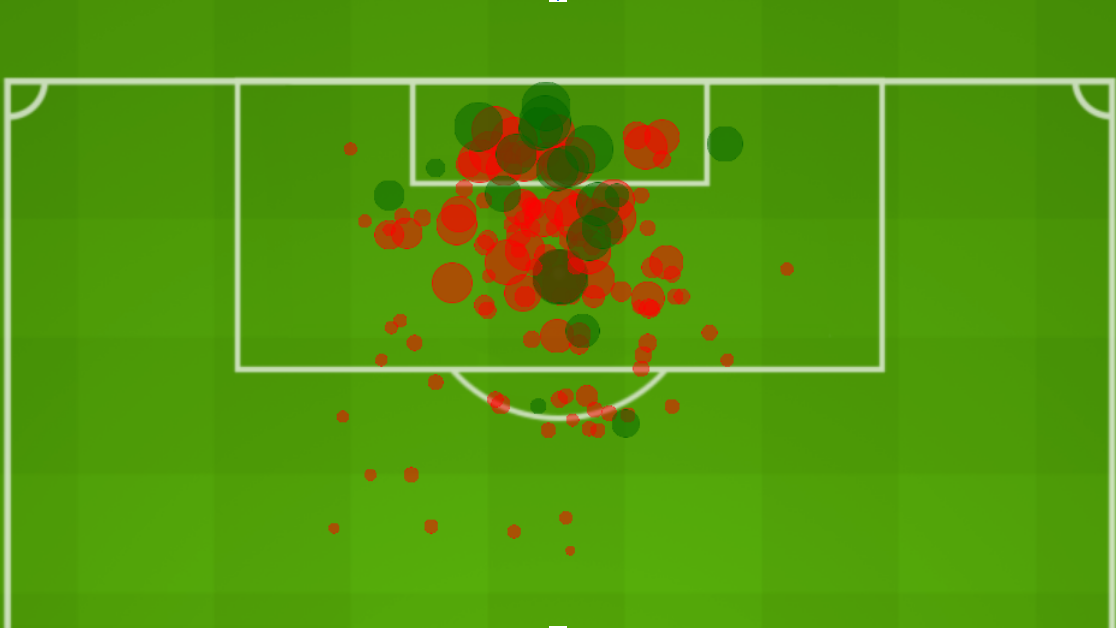 The most hopeful explanation for Kane's decline is injuries. Normalizing his production to per-90-minutes should eliminate the effects of lost time, but Kane has arguably been playing through injuries for the past 18 months and it has affected his performance even when he has made it onto the field. (Worse still, his fitness hasn't always lined up with teammates, with Dele Alli battling injuries and Eriksen having endured a tough start to the season.)

More from Ryan O'Hanlon:
- Sergino Dest is proof of U.S. Soccer's progress
- Who has been the Premier League's best attacker, 2010-19?
- Why being good at set pieces can win you trophies

In March 2018, Kane injured his ankle in a game against Bournemouth. He'd scored 24 goals in his first 28 games of the season but managed only six more after missing two games because of that ankle knock. Then, rather than resting for the summer, he played a full slate of World Cup matches for England. Last season, he missed eight games with a torn ankle ligament in January and then another nine with another ligament injury in April. He rushed back to start the Champions League final and was completely ineffective, registering just a solitary attempt on goal in garbage time after Liverpool had gone up 2-0.

With two Nations League games with England this past summer, Kane hasn't really had much time to heal. If he ever gets that, maybe we'll see his numbers start to tick back up for his club.

However, when asked, Tottenham have been quick to insist that Kane isn't hurt, and with each passing game, the best version of Kane gets further away.

Kane did add four assists last year to make up for some of the decline in scoring. However, all of his non-shot production -- chances created, through balls played, passes completed in the final third -- has remained relatively stable or declined slightly. It's possible that the succession of injuries means the old Kane will never come back. It's also possible that Kane just experienced two career years in succession -- one via his finishing and one via his overall performance -- and his true level is somewhere around what we saw last year. A very good Premier League player, but not an all-conquering, world-class attacker.

Given the financial resources of their closest competitors, in England and in Europe, Tottenham must have worried about losing their superstar one day. It's doubtful, though, that they ever envisioned it would happen quite like this.