If you're a fan of dramatic title races, you probably aren't enjoying the 2021-22 European soccer season all that much.

Bayern Munich lead the Bundesliga by six points over second-place Borussia Dortmund, and FiveThirtyEight gives the German giants a 97% chance of winning their 10th consecutive Bundesliga crown. In response to losing Ligue 1 last season, Paris Saint-Germain spent even bigger than normal, added Leo Messi among others, and lead by 11 points with a 98% title chance. Real Madrid and Inter Milan lead LaLiga and Serie A by four points each, both with 82% odds.

Even the vaunted Premier League, with its fat pockets and Big Six clubs, is looking at another season without a gripping race. Manchester City lead Liverpool by nine points and enjoy an 82% title chance as well. Any hope of a gripping race all but ended when City ripped off 12 consecutive league wins beginning in early November. As incredible as the 2018-19 chase was -- City and Liverpool galloped away from the field, earning 98 and 97 points, respectively -- it's the only time since 2014 that the Premier League title was decided by fewer than seven points. Someone almost always pulls away.

We're certainly used to powerful clubs ruling soccer -- it's not exactly a new concept. After all, Bayern have won more than half of the Bundesliga titles dating back to 1969, and Real Madrid and Barcelona have combined for 57 LaLiga titles since 1945.

The Premier League was decided by five or fewer points 10 times in the 20 seasons between 1995 and 2014, and by zero or one point on five occasions. And even with Bayern winning more titles than anyone else, the Bundesliga used to be the paragon of thrilling title races, decided by either zero or one point 10 times between 1977 and 1995 and by two or fewer points seven times between 1997 and 2009. It's been decided by single digits only once during Bayern's current title streak.

The Elo Football rankings track nearly every European result back to the mid-1950s. An Elo system is simple and straight-forward -- the winning team takes points from the loser, you get more points for beating someone significantly better than you (and vice versa), and a lower-rated team can take points from a superior team in the case of a draw as well. It can serve as basically a running scorecard from year to year. It can also tell us a lot about the power of powerful clubs. 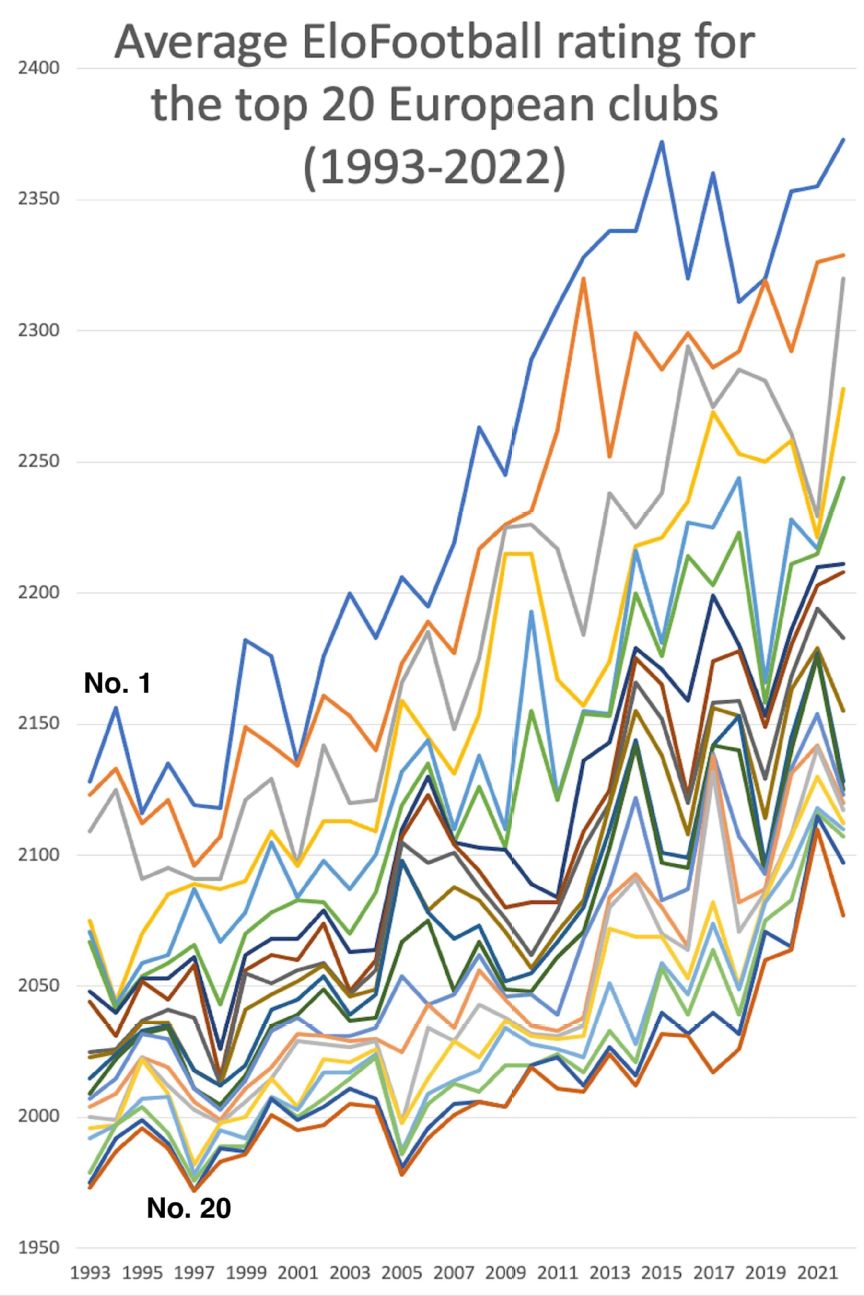 The more you win, the more points you take from opponents, and the winningest clubs are taking more from others than they used to. At the end of the 1994-95 campaign, Juventus ranked first with 2,116 points, winning Serie A and the Coppa Italia but losing to No. 9 Parma in the UEFA Cup (now the Europa League) final. Ajax beat AC Milan in the Champions League final -- the clubs finished third and fourth in the year-end Elo Football ratings with 2,091 and 2,070 points.

Of course, you don't need fancy math to understand what we're seeing -- just look at the table. Five of the six best point totals in Premier League history have been generated in the past five seasons, and the current Manchester City team is on a similar pace. No top-flight English team had ever won more than 14 straight league matches before 2017; City and Liverpool have each topped 15 straight twice since then. In Germany, no Bundesliga team had ever topped 2.32 points per game before 2011-12; Borussia Dortmund did it in 2012, and Bayern have done it nearly every season since.

Three questions, then: How did it get like this? What could be done about it (if the powers that be decided something should be done, anyway)? And how much further can the richest clubs separate themselves from the pack if nothing is done?

The push away from parity

It's easy enough to explain how we got here.

Basically every major development the sport has seen in the past 30 years pushed us away from parity. The Bosman ruling of 1995 prevented clubs from collecting transfer fees for out-of-contract players and significantly increased player movement throughout Europe. This has been fantastic for players themselves (and their agents), but it came with a cost: certain clubs with bigger brands and checkbooks were poised to take better advantage.

Money both in and out has skyrocketed in the past three decades, and the recipe for inequality has been baked right into the cake -- the "market pool" portion of Champions League revenue distribution assures that clubs with bigger names will make more for reaching a certain round of the tournament than lesser lights would for reaching the same round. Barcelona famously made nearly €40 million more for losing in the 2019 semis than Ajax did, simply because they were Barcelona.

All of this hasn't stopped some of the biggest brands from floundering at times, but its effects have been obvious. With how everything has developed, it would have been shocking if the richest clubs hadn't pulled away from the pack.

The potential fixes are pretty easy to describe (and are potentially unrealistic).

From a macro level, inequality and the existence of big-bads don't automatically serve the sport poorly. A Real Madrid-Barcelona Champions League final would likely draw much higher TV ratings than, say, Sevilla-Atalanta, and overall revenues, TV ratings, attendance, et cetera, certainly didn't hint at many high-level issues before the COVID years. And again, to the extent that the Bosman ruling made club expenses skyrocket, it did so in favor of the players. That isn't a bad thing in and of itself, even if the game's mega-agents are deriving more and more clout and cash from it.

Still, the pandemic years certainly shined a bright light on the effects of inequality, bringing major hardship to lower-level clubs and leagues and showing all the cracks in even the higher levels of the sport. And last spring's failed Super League venture showed us both how stratified the haves-versus-have-nots divide is and how difficult it will be for said divide to ever get bridged.

People like Real Madrid president Florentino Perez and Barcelona president Joan Laporta still believe that the Super League was necessary to save the sport. As Perez said: "It's a format to prevent football, which is losing interest, from dying." Let them make all the money they want, and it will trickle downstream and cure everything, you see.

In a battle of the richest clubs vs. UEFA vs. FIFA, it feels like the war for the soul of the sport is being fought by the most soulless. Still, we know what potential fixes are, or could be, in play.

UEFA created a set of Financial Fair Play regulations in the late 2000s to crack down on teams spending more than they earned. As the surge of big-brand dominance of the 2010s suggests, it hasn't even slightly worked to limit spending or increase parity. The regulations have been too easy to tiptoe around with creative bookkeeping and have ended up punishing lower-level clubs above all else. (Funny how that's what typically tends to trickle downstream.)

UEFA is in the process of crafting a new set of regulations that potentially include a salary cap of sorts, plus perhaps a luxury tax for overspending. Perhaps it will rein things in a bit for the richest of the rich, as it has in some American sports leagues; at the very least, LaLiga's attempts at a salary cap structure have prevented Barcelona from racking up even more irresponsible levels of debt of late.

As the league races continue to lose drama, you can certainly find more conversations about changing league formats, as well -- adding an American-style playoff to the end, for instance, or creating multi-nation super leagues like the oft-discussed "Benelux" league that would pit the best teams from the Netherlands and Belgium (and Luxembourg!) against each other, theoretically increasing both revenue and competition levels. At the moment, none of these changes appear to be in heavy discussion among actual decision-makers.

There are also plenty of other, obvious things UEFA could do if it genuinely wanted to create a more even playing field. It could dump the "market pool" distribution, obviously. It could increase the solidarity payments that go to clubs and leagues further down on the totem pole, too. And one of my personal favorite ideas, as described here by ESPN's Gabriele Marcotti, is lowering the number of players a club can register. If you can't redistribute the wealth, you could at least redistribute the talent.

How far can dominance go?

The biggest brands have been and will always be the biggest brands. It's a pretty closed club, so to speak. Their level of dominance has indeed increased, and while it's important to wonder how that could be curbed, it's also interesting to wonder how much further this can go. If money continues to flow upward, how much more dominant might the largest clubs become?

In theory, we're approaching the limit, and not just from a "Bayern certainly can't win more than 100% of the Bundesliga titles" perspective. Because of soccer's innate randomness -- plus the fact that you can still fit only 11 players on the pitch no matter how much money you have (and a lot of them will suffer injuries, no matter how much money you plug into your physio staff) -- it's going to be difficult for the top teams to win more than they already are.

The top eight teams in the current Elo Football ratings are Bayern Munich, Manchester City, Liverpool, Real Madrid, Chelsea, Inter, PSG and Ajax. During their current league seasons and the 2021-22 Champions League, they have played 205 matches that were not against each other. They've won 154 of them with 34 draws and just 17 losses, good for 2.42 points per game overall.

That's dominant, but it goes beyond even that: Of those 17 losses, only four featured a negative xG differential. So from an expected production standpoint, they were the superior team even in most of their losses, sometimes dramatically so. There have been some subpar performances, but even with injuries and the most recent COVID-19 variant creating a lot more player absences and odd lineups, it's hard for these top teams to improve on what they have done of late, if only because the game is always going to produce randomness.

So soccer might not be capable of producing teams with results more dominant than what we've seen of late. That's something, right?

In 2022, Spanish, English and German clubs -- well, one German club -- have won the past 11 Champions League and past 10 Europa Leagues. The best leagues have distanced themselves from the pack, the richest league (the Premier League) has separated itself even further, and in a given year, a small handful of teams not only lords over all the rest but removes any drama from league title races more often than not.

Obscene amounts of money clearly don't guarantee world domination; Manchester United and Arsenal have proved that of late, and Barcelona's recent travails have certainly shown that having the fattest checkbook doesn't mean you're going to use it properly. (Plus, nouveau-riche Newcastle are quickly finding out that simply throwing money at a problem might not draw your first-choice options to town.)

Good management does still matter, and randomness will still play a role in the outcomes of the sport. Sometimes Southampton will take points off Manchester City, and sometimes Lille will beat PSG for the league title. It wouldn't take too many serious tweaks to even the playing field a smidge -- a Financial Fair Play approach that actually sort of works, for instance, and a slight cut of the player registration max and elimination of the damned market pool. We'll see if those in charge of the sport have the necessary wherewithal, and find the common ground, to make necessary decisions.