Video Assistant Referee (VAR) causes controversy every week in the Premier League, but how are decisions made and are they correct?

After each weekend, we take a look at the most high-profile incidents and examine the process both in terms of VAR protocol and the Laws of the Game.

What happened: Deep into injury time with Chelsea leading 2-1, Tottenham had a corner. When the ball was played in, Cristian Romero yanked Marc Cucurella's hair off the ball and pulled him to the ground. No foul was given, and Tottenham equalised from another corner which immediately followed.

VAR review: Let's start with the VAR protocol itself. The VAR cannot advise that a referee has missed a general free-kick offence in open play that doesn't lead directly to a goal or penalty. If the referee misses a foul in the lead-up to a corner, the VAR cannot tell the referee to cancel that set piece. If the team then scores from that corner, the goal cannot be disallowed. The only way the VAR can get involved in this situation is if they feel there has been a red-card offence.

Hair pulling is rare, and isn't specifically covered within the Laws of the Game so comes under either violent conduct or unsporting behaviour, depending on the specifics, though the mere act isn't an automatic dismissal. But when off the ball and with force it would be considered by most referees to be a red card.

While referee Anthony Taylor might not have seen the entirety of the clash while watching all players from the corner, it's the VAR, Mike Dean, who should have identified a serious missed incident and a red card. We discussed last week how the high bar for intervention causes issues, and this can be seen again here.

In the Premier League, the VAR is looking for an indisputable red card, so a referee won't be sent to the monitor just for another look. This isn't the case in some other competitions, so the best outcome may be missed, with players not receiving any disciplinary action. With a lower bar, Dean could send Taylor to the monitor for a possible red card even if he wasn't absolutely certain Romero should be sent off. If the referee disagrees it's a red, he could still issue a yellow -- though it's highly likely Taylor would have sent Romero off.

Last season, Manchester United's Fred avoided a red card for headbutting Paris Saint-Germain's Leandro Paredes because the referee judged it to be a caution after a VAR red-card review. If Taylor only issued a yellow, at the very least it would have allowed the Romero incident to be dealt with and a free kick awarded to Chelsea, and the corner from which Spurs scored wouldn't have happened. In over three years with VAR in England, not once has a referee rejected a red-card review and opted to show a yellow card instead -- all part of the high bar limiting the use of the monitor.

This is the perfect example of when being able to hear the conversation between the referee and the VAR would help, but sources have told ESPN that there are no immediate plans for this to happen.

We can look at several examples of hair pulling and see inconsistencies across the game. In May 2016, Leicester City's Robert Huth was retrospectively banned for three games for pulling the hair of Manchester United's Marouane Fellaini off the ball (Romero cannot face retrospective action as the incident was assessed by the VAR during the game). In December 2018, Fellaini pulled Arsenal's Matteo Guendouzi to the ground by his hair, but while the free kick was given, no card was shown. There was no retrospective action because the referee saw the incident at the time.

In March 2020, England's Georgia Stanway was shown a yellow card after pulling United States forward Tobin Heath down to the ground by her hair.

There were two identical examples that resulted in opposite outcomes. In the 2017 MLS season, Michael Boxall of Minnesota United pulled the hair of San Jose Earthquakes Danny Hoesen, but the VAR didn't advise a red card. In September 2018, Cristiano Ronaldo was sent off on his Champions League debut for Juventus for pulling the hair of Valencia's Jeison Murillo.

Possible foul in the build-up and offside on Hojbjerg goal

What happened: Pierre-Emile Hojbjerg made the score 1-1 in the 68th minute, but there was a question of a foul in the build-up by Rodrigo Bentancur on Kai Havertz and offside against Richarlison.

VAR review: We can cover the possible foul by Bentancur very quickly. It came 44 seconds before the goal, and there's no way the VAR will get involved in an incident so far back.

Onto the possible offside against Richarlison, which presents greater debate but is consistent with many other VAR offside decisions in the Premier League.

Many will believe Richarlison must have an effect on Edouard Mendy's decision making, but the Chelsea goalkeeper had a clear sight of the ball when it is struck by Hojbjerg. This is the only moment that counts for line of vision as it sets the offside phase.

From this point on, Richarlison can only be considered to have impacted Mendy if he makes an obvious movement either towards the ball or that might impact the goalkeeper. The mere act of being stood in an offside position doesn't mean a player has committed an offside offence. It's one of the intricacies of offside that confuses many fans and players.

If a shot comes from outside the area, and the offside player isn't very close to the goalkeeper, or in his line of vision and doesn't make a play for the ball, it's very unlikely to be punished. We saw many similar examples last season, including in Chelsea's favour for Mateo Kovacic's goal against Liverpool.

Of course, this one of the subjective elements of offside, so there will be different viewpoints and many will believe this should be offside. But the decision will remain with the on-field decision which is not subjectively wrong.

We can also use the example of Real Madrid's winning goal against Liverpool in the Champions League final, when the ball went within an inch of the boot of an offside Karim Benzema before Vinicius Junior scored. While the initial ball wasn't a shot on target, interference without attempting to play the ball came into question.

What happened: The game was goalless in the 42nd minute when Declan Rice played in Said Benrahma to score. However, Michail Antonio and Orel Mangala clashed off the ball.

VAR Review: This creates a discussion about when VAR should get involved with a foul off the ball that leads to a goal. It very rarely happens in the Premier League, certainly when the incident is outside the box.

In this case the VAR, Michael Salisbury, decided Antonio's push on Mangala had a material impact on the outcome because it prevented the Forest defender from challenging Rice before he created the goal.

It was a foul by Antonio, as he changed the direction of his run and raised his hands before the two players collided. But don't be surprised if there's a similar incident that isn't overturned by the VAR.

What happened: Scott McKenna stopped a goal-bound shot from Tomas Soucek with his arm with Forest leading 1-0.

VAR Review: A simple decision for the VAR to award the spot kick, as McKenna clearly leant into the shot to prevent the ball reaching the goal.

Should McKenna have been sent off, rather than shown the yellow card by referee Robert Jones?

McKenna hasn't denied an obvious goal-scoring opportunity, because Soucek has released a shot on goal. The opportunity has happened.

McKenna could only be shown a red card if he prevented a goal, and as goalkeeper Dean Henderson (who saved Rice's penalty) was directly behind him, it is very likely the shot would be saved. Therefore, a yellow card was probably the correct outcome, though many will believe it's more logical that an offence such as this should result in a red card. Reece James was sent off for handball for Chelsea at Liverpool last season because he was on the goal-line with no player behind him, and as such he prevented a goal.

That said, if the ref sees the handball, he almost certainly shows the red card because he cannot judge that Henderson will make the save. But through the VAR replay, he gets the view behind the goal which shows there is a low probability that a goal has been prevented by the handball.

There was a third VAR overturn in the game, with Brennan Johnson's 53rd-minute goal ruled out for a clear offside. 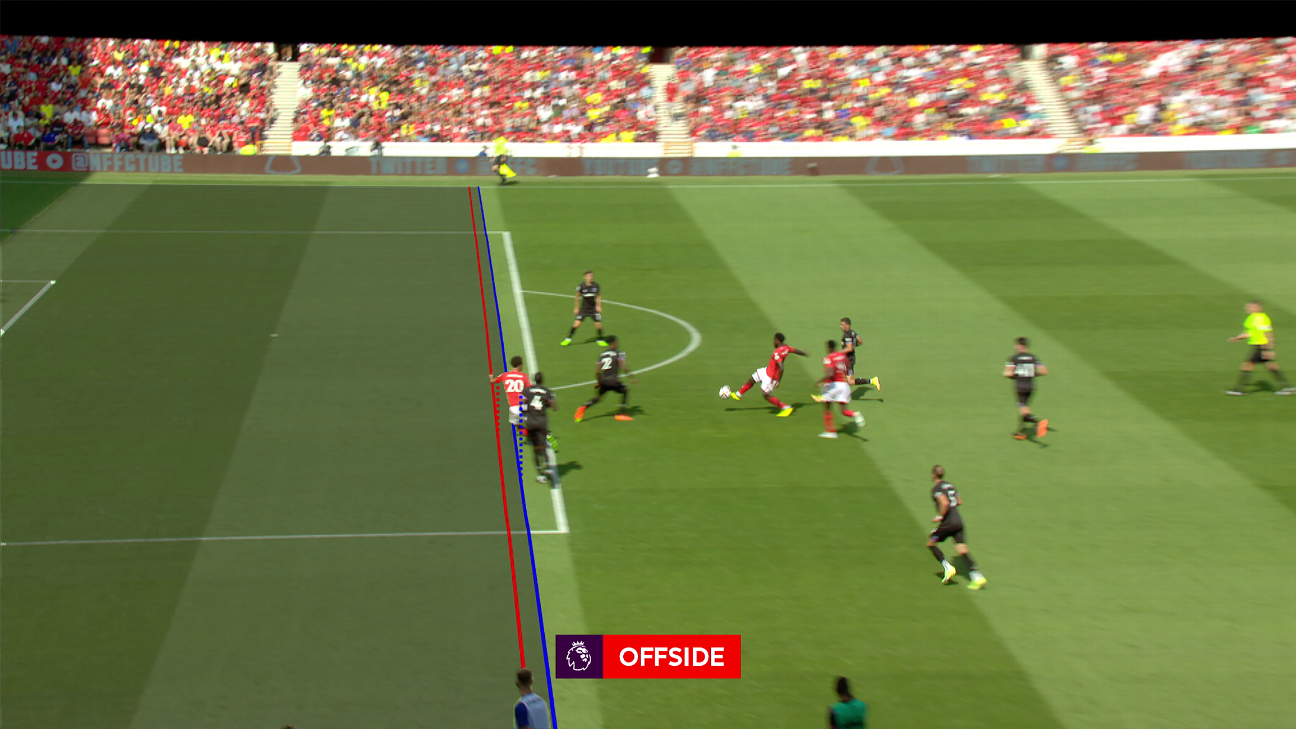 What happened: Arsenal were 2-0 up in the 43rd minute when referee Darren England awarded a penalty for a foul on Jamie Vardy by Aaron Ramsdale.

VAR review: We can compare this with a penalty from last week that was not overturned, when Virgil van Dijk was penalised for a foul on Fulham's Aleksandar Mitrovic. In that case the VAR found contact by Van Dijk on Mitrovic's knee, caused by the way the Liverpool defender challenged for the ball.

In the case of Ramsdale and Vardy, the VAR (Mike Dean) felt any contact between the two players was initiated by the Leicester City striker after Ramsdale was pulling out and advised the overturn. England did retain the option to book Vardy for simulation but chose not to, deciding the speed the players were moving at did not warrant a card. A correct overturn.

What happened: Stuart Armstrong was played through on goal in the 14th minute with the score 0-0 and brought down by Diego Llorente, but referee Tony Harrington allowed play to continue.

VAR review: One of those decisions that on another day might go the other way, with Llorente sent off as Armstrong was about to run into the area for a goal-scoring chance.

Regardless of winning the ball, if you do so by going through the opponent first, a foul should be given. There's no doubt the Leeds defender got to the ball, but did he go through the attacker to get to it? Opinion will probably be split on this.

What happened: In the 16th minute, Callum Wilson had the ball in the back of the net, but the whistle had already been blown by referee Graham Scott for a high boot.

VAR decision: No intervention possible, once the referee blows his whistle, the play is dead.

VAR review: Should the referee have allowed play to continue? Possibly, though Brighton's players had already stopped by the time Wilson fired the ball into the net.

Scott could have allowed play to continue for a few seconds, but he would still have blown his whistle for the foul when the ball crossed the line. And the VAR, Craig Pawson, wouldn't have viewed it as a clear and obvious mistake.

What happened: In the 95th minute, Mitrovic chased down Morgan Gibbs-White and fouled the Wolves player from behind, with the players then squaring up to each other face to face.

VAR review: Mitrovic could very easily have received two yellow cards for the two incidents -- for the initial foul on Gibbs-White and for adopting an aggressive attitude in the clash that followed. Referee John Brooks chose to just diffuse the situation by cautioning both players.

The VAR cannot get involved as it would be advising a second yellow, which isn't possible under VAR protocol.