After each weekend we take a look at the major incidents to examine and explain the process both in terms of VAR protocol and the Laws of the Game.

What happened: In the 33rd minute with Chelsea 1-0 down, Thiago Silva attempted to intercept a forward pass and shift the ball out wide. He fell to the ground under a challenge from Jordan Ayew, and pushed the ball away with his hand into the legs of the Crystal Palace forward so he didn't have the chance to break towards goal. Referee Chris Kavanagh showed the yellow card for stopping a promising attack.

VAR review: Making judgement on the threshold between a yellow and a red on DOGSO is often tricky, as there are a number of factors a referee and the VAR, in this case Stuart Attwell, have to consider.

An example such as this looks worse, too, with Silva's handball clearly a deliberate act to stop the Palace player from getting the ball. But the officials can only use the interpretation that covers DOGSO, and not take into account the cynical nature of Silva's actions.

Factors:
- Location and number of defenders: if there is a player capable of making any challenge before the attacker would be able to have a shot on goal.
- Distance to goal: closer to the goal, the more likely an obvious goal-scoring opportunity is present.
- Distance to the ball: likelihood of keeping or gaining control of the ball.
- Direction of play: the attacker must be moving toward goal when the foul is committed.

There are questions over the distance to goal and the direction of play, with the striker in a wide position, with the possibility that at least one defender, Ben Chilwell, would get back before there was a shot on goal.

Ayew may have been able to get a shot on goal, but the VAR is judging whether there is an obvious goal-scoring opportunity. There's a case for a red card, and had Silva been sent off, it's unlikely the VAR would have intervened, but it's difficult to say that Kavanagh definitely made a mistake by only showing the yellow card. And this is the whole ethos of "clear and obvious."

If we compare it to the VAR DOGSO red card shown to West Brom's Semi Ajayi against Burnley in the 2020-21 season (watch here), some will ask how Matej Vydra could be considered to have had a clear goal-scoring opportunity when he was in the centre circle, but Ayew didn't. It comes down to DOGSO being a subjective judgement of all the four factors, rather than just one, like distance from goal.

Vydra was definitely through on goal in a central position without another defensive player in that half of the field. The probability was he had an obvious goal-scoring opportunity, whereas there were more doubts with Ayew.

Palace chairman Steve Parish claimed Silva should have received two yellow cards as the ball hit the defender's hand twice, but that isn't how the law works. On the first touch, the Chelsea player's hand drops onto the ball before he then deliberately swats it away. Even if Silva had deliberately touched the ball twice in that half-a-second period, there would be only one yellow-card offence.

Red card: Royal sent off for challenge on Martinelli

VAR review: We cover these kind of challenges each week and always discuss whether the referee's on-pitch decision is an acceptable disciplinary outcome -- ergo, he hasn't made a "clear and obvious error." There will always be incidents that seem to be similar but can lead to different final outcomes.

Take Liverpool defender Virgil van Dijk's challenge on Everton's Amadou Onana in the Merseyside derby, or Newcastle United defender Fabian Schar on Wolverhampton Wanderers' Pedro Neto. Both had basic similarities to the Royal foul -- they all involved contact on an opponent with the studs above the ankle; Van Dijk and Schar were booked, Royal was sent off -- and all three cards were upheld by the VAR.

Taylor was the referee for both the Van Dijk and Royal incidents, so why did he view one differently to the other? This comes down to the two factors that decide serious foul play: endangering the safety of an opponent and the use of excessive force.

While the contact on Onana was high, Van Dijk mistimed a genuine challenge and there was neither the force or the nature of the contact on the shin to be deemed a clear missed red card by the VAR. Royal, too, had no great force in his challenge (more on this in the next section), but it was how he made contact, with no realistic ability to play the ball, in a way that was dangerous to the opponent.

We are likely to see similar incidents that only see a yellow card produced, but as explained in the Silva incident, Taylor's decision to show a red card to Royal is an acceptable disciplinary outcome.

What happened: In the fifth minute, Nathaniel Chalobah fouled Sean Longstaff; referee Darren England played the advantage and booked the Fulham player when the move broke down.

VAR review: The definition of force in the Laws of the Game is often misunderstood. A player mistiming a tackle and catching an opponent above the ankle could be considered to be endangering the safety of an opponent, but it often won't involve excessive force. Chalobah's VAR red card against Newcastle United is the perfect example of the latter.

Chalobah came into the challenge at speed, and while he didn't catch Longstaff particularly high above the ankle, it was the force at which he did so that meant the VAR, Mike Dean, was always likely to advise the referee to upgrade the card to red.

This was the first VAR red card of the season.

What happened: In the 22nd minute, Brentford's Kristoffer Ajer caught AFC Bournemouth's Jordan Zemura when making a sliding challenge on the edge of the area. Referee Thomas Bramall waved play on.

VAR decision: The VAR, John Brooks, advised a penalty kick but Bramall rejected this after reviewing the replays at the monitor.

VAR review: Is there a case for a penalty? Absolutely. Was it a "clear and obvious error" not to award a penalty? This one will split opinion and it's up for debate whether there was enough for a VAR intervention, even if you think it should have been a penalty kick.

The Brentford player certainly touches the ball with his supporting leg, while also making contact with Zemura with his raised leg.

Does Ajer make any kind of foul before winning the ball? As Ajer goes into the tackle with one leg raised, does that negate winning the ball with his other foot? The VAR felt so, but Bramall stuck to his own original decision.

It's the second time this season a referee has rejected the VAR's advice (the other also went against Bournemouth when Michael Oliver upheld a penalty awarded to Nottingham Forest). It didn't happen once last season, and the hope has to be referees' confidence at the monitor grows so we don't see a repeat of the poor overturns involving Arsenal, Newcastle, West Ham last month.

Bramall is in his first season in the Premier League, and this was only his second match. Added to that, he had accepted a VAR overturn in his first game to give Brighton a penalty at Fulham. After having been shown to make an error in his first match he then had the confidence to correctly reject a VAR review in his second. Many experienced top-flight referees have never rejected a monitor review.

Whether you agree with the outcome on this decision, it's the way VAR really should work, with the referee having the courage of his own convictions from time to time. If referees do not reject at least some reviews at the pitchside monitor, then it suggests a VAR can never make a mistake, which as we know all too well is not the case.

What happened: In 53rd minute, Kieffer Moore wanted a penalty for a foul by Brentford defender Pontus Jansson. Referee Bramall gave a foul against Jefferson Lerma.

VAR review: While Moore certainly went down under the contact from Jansson, he was pushed into the Bournemouth striker by Lerma. No chance of a VAR penalty and the correct decision.

What happened: In the last seconds of the game the ball bounced up and hit the outstretched arm of Mathias Jensen. Referee Bramall waved away the appeals for a penalty.

VAR review: While there's no doubt the ball hit the arm of Jensen, there's no chance a penalty could be awarded for this -- and it would have been overturned by the VAR if it had.

Jensen makes a failed attempt the clear the ball and it bounces up off his leg and onto his arm, which is behind his body in a natural position for kicking the ball. The Brentford player isn't even looking in the direction the ball hits his arm.

Even though Bramall blew the final whistle straight after the incident it was still possible for the VAR to advise a penalty kick (see Brighton vs. Man United in September 2020.)

What happened: Roberto Firmino thought he had brought Liverpool back into the game, when 2-0 down, but the flag went up for offside.

VAR review: Another example of a goal being allowed thanks to the "benefit of the doubt" added to VAR offside in the summer of 2021.

A single green line to the last defender shows it was a close decision within the tolerance level.

Compare it to this goal Salah had disallowed by the VAR at Brighton in the 2020-21 season. The two lines shown are touching, so this goal would have been allowed if the "benefit of the doubt" had been in place at the time. 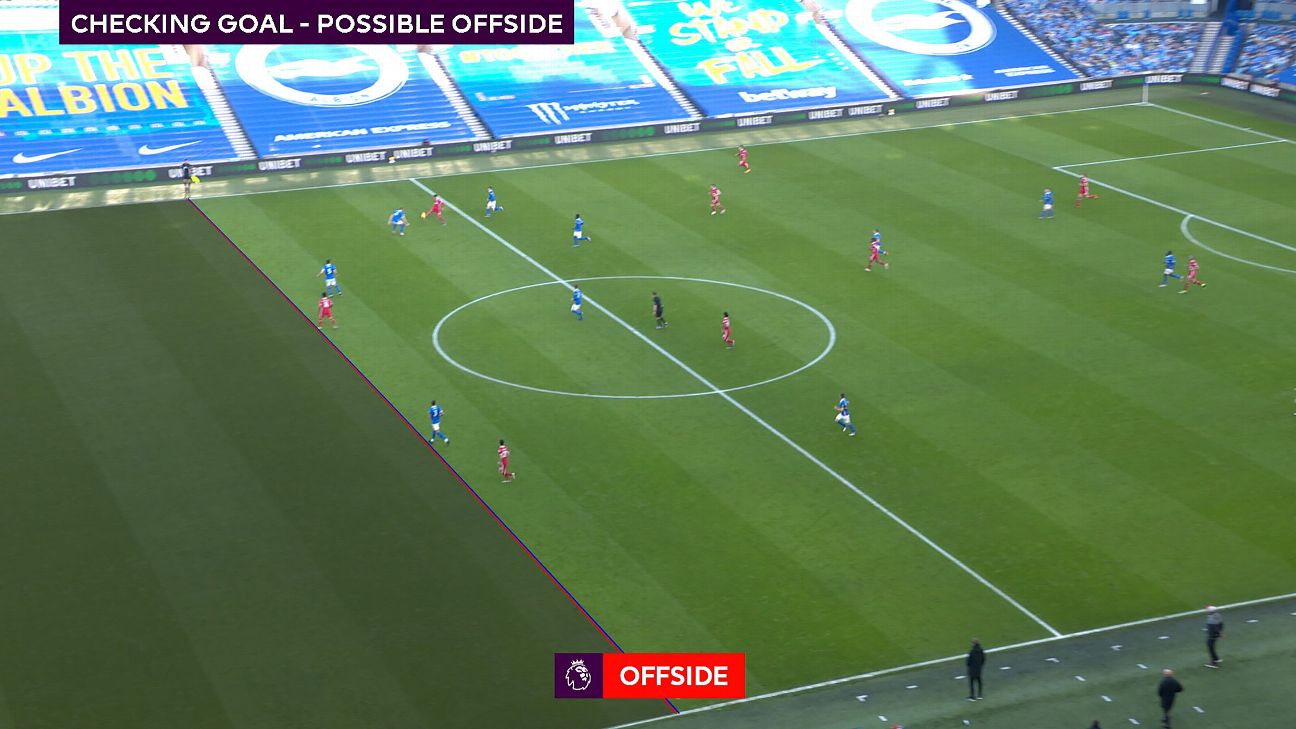 There were two other close offside calls, but neither required the "benefit of the doubt" with the green attacker's line being behind that of the defender.

First, for Callum Wilson's opening goal for Newcastle at Fulham. 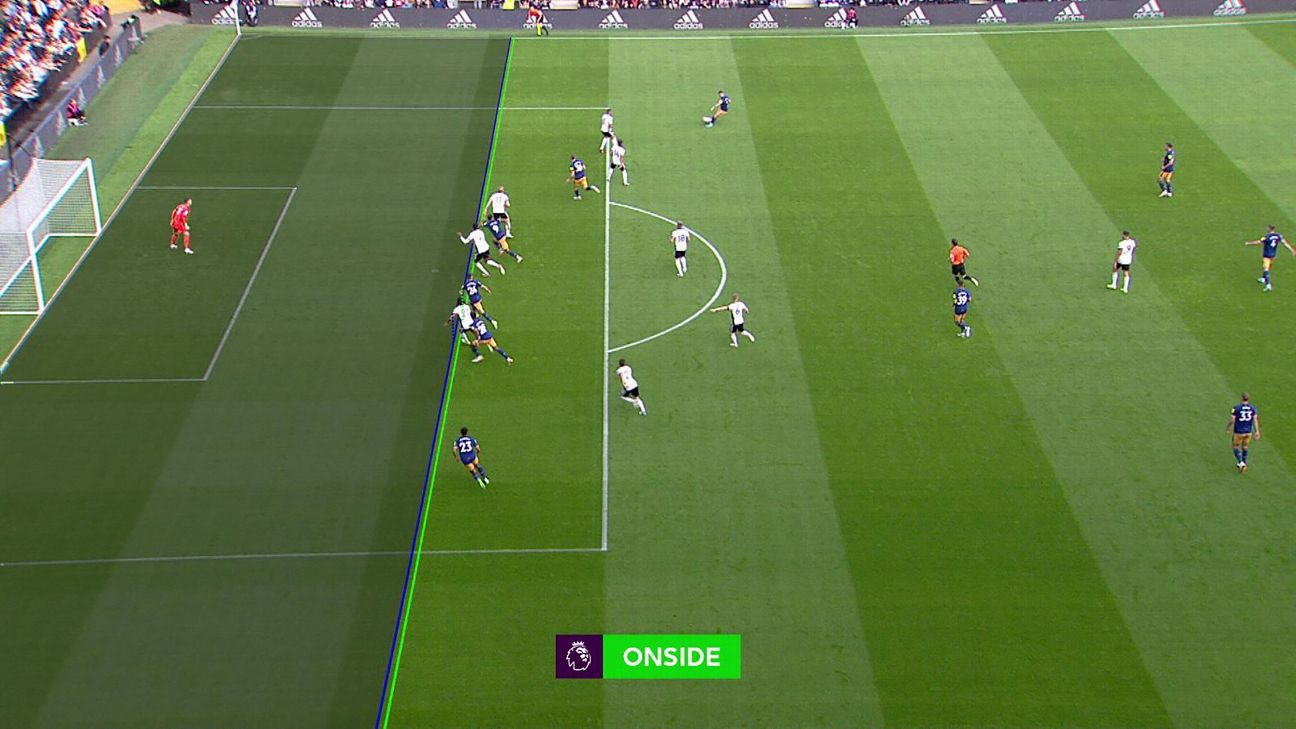 And also for Man City's Sergio Gomez before he set up Erling Haaland for his hat-trick goal in the Manchester derby. 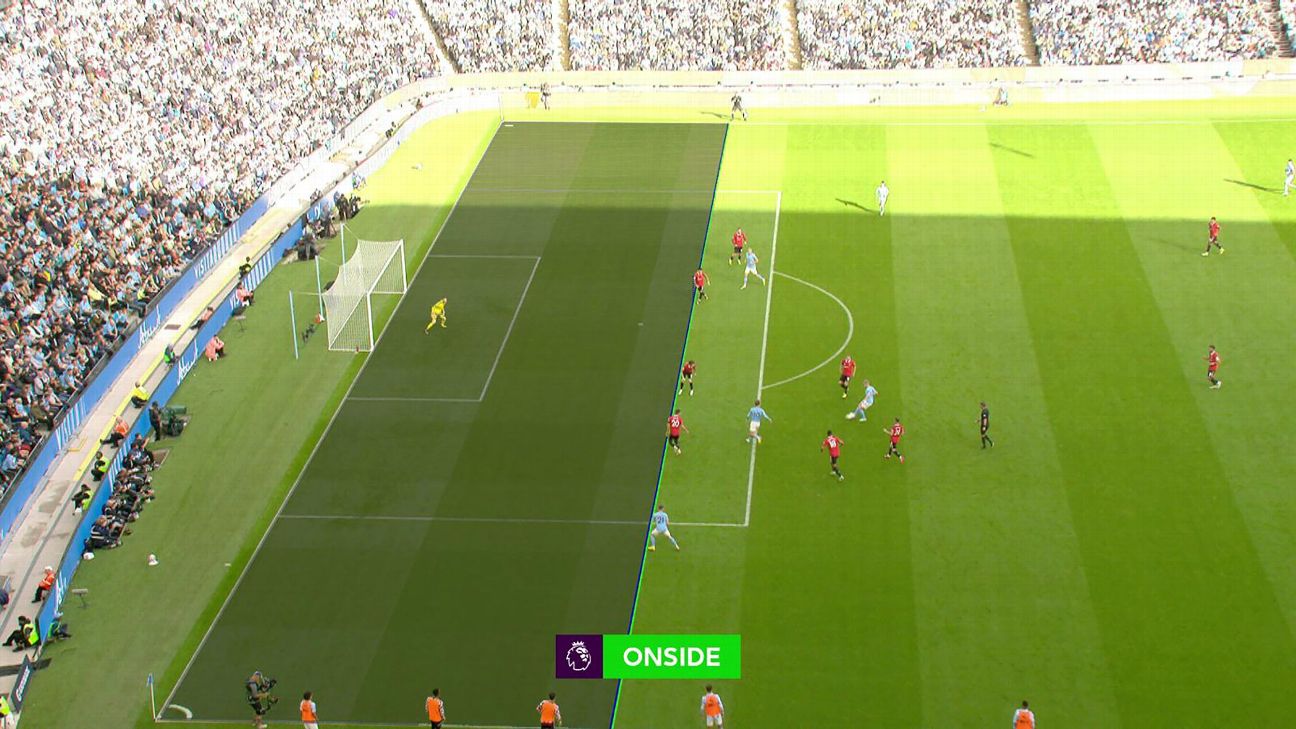 What happened: Manchester City's Phil Foden completed his hat trick in the 72nd minute, but there was a VAR check for the ball being out of play.

VAR review: To disallow the goal, the VAR (Paul Tierney) would need to have definitive proof all of the ball was out of play when Kevin De Bruyne attempted to keep it in.

While most of the ball was over the touchline, it's not certain the whole of it was (including the over-hang.) Therefore, the goal had to stand to put Man City 6-1 up against Manchester United.

What happened: Aston Villa had a free kick in the 32nd minute, and as the ball was swung in, Liam Cooper appeared to tug the shirt of Tyrone Mings inside the area.

VAR review: One of the key considerations for holding inside the area, set out by the Premier League at the start of the season, was whether or not both players were committing holding offences.

Replays cleared showed that Mings was pulling Cooper's shirt, before the Leeds United defender then did the same to his opponent. Because of this there was very little chance that the VAR, Michael Salisbury, would advise a penalty.

Regardless of that, the holding from Cooper taken in isolation appeared to have little impact on Mings, and it must limit the opponent's ability to play the ball. But Cooper certainly took a great risk with his actions.