Video assistant referee causes controversy every week in the Premier League, but how are decisions made, and are they correct?

After each weekend we take a look at the major incidents, to examine and explain the process both in terms of VAR protocol and the Laws of the Game.

What happened: In the 93rd minute, De Bruyne went down under a challenge from Antonee Robinson. Referee Darren England pointed to the penalty spot.

VAR review: Two seasons ago there were lots of "soft" penalties like this. These have mostly been eradicated as referees look for contact with a consequence from the defender, while an exaggerated fall by an attacker is also taken into account -- but we still see some given by a referee.

It's up for debate whether the VAR, Stuart Attwell, would have advised a review for a penalty, due to the way De Bruyne went down theatrically (more on this to come.) But the contact on the Belgian's ankle by Robinson makes it very unlikely that the VAR would overturn the spot kick if given. The ethos around soft penalties should still be focused on the referee's decision on the field of play (more on this to come too.)

The bar is effectively set by the original decision -- so similar incidents can result in different outcomes. It's the major conflict with VAR and subjective decision-making in football.

That said, it doesn't really feel right that we can still see such soft penalties like this, in game-defining moments, when they are rarely given in other matches.

What happened: In the 25th minute, Harry Wilson was through on goal when he was bundled over inside the area. Referee England pointed to the penalty spot and sent off Joao Cancelo for denying an obvious goal-scoring opportunity (DOGSO.)

VAR review: An easy decision for the VAR to confirm. Wilson had control of the ball, was through inside the area and would have got a shot on goal.

Cancelo not only used his upper body to challenge Wilson, he also brought his left leg across the Fulham midfielder and was making no challenge for the ball. It's that last point which means Cancelo had to be sent off; if the Man City defender had made any attempt at the ball it would only have been a caution.

This incident does show us how a referee has to act differently as the VAR. If England gave this as a penalty when he was the referee, why didn't he do so for a similar challenge when acting as the VAR for Tottenham Hotspur vs. Liverpool? Ryan Sessegnon was challenged by Trent Alexander-Arnold in a similar fashion, but referee Andy Madley waved away appeals for a penalty. Surely if England thinks one was a penalty, he should say both are?

But this isn't the way VAR works. The VAR is acting within the confines of the subjectivity of the referee on the pitch, what Madley describes he saw. With Alexander-Arnold on Sessegnon, it was more a case of the Liverpool defender leaning into Sessegnon rather than there being any shove. If Madley had given a penalty to Spurs, it would have stayed a penalty; it's in the corridor of subjectivity whereby the VAR will not intervene.

It's understandable that fans will look at these two incidents and feel that are very similar, featuring the same referee in different roles producing different outcomes. But England is not trying to produce consistency of his own overarching decision-making when judging incidents as the VAR.

What happened: Man City thought they had gone 2-1 up in the 74th minute through Haaland, but there was a review for offside.

VAR review: Although the assistant referee kept his flag down, the VAR lines clearly showed Haaland was in front of the last defender. Remember, the two lines must touch for the attacker to get the benefit of the doubt and the goal to stand. 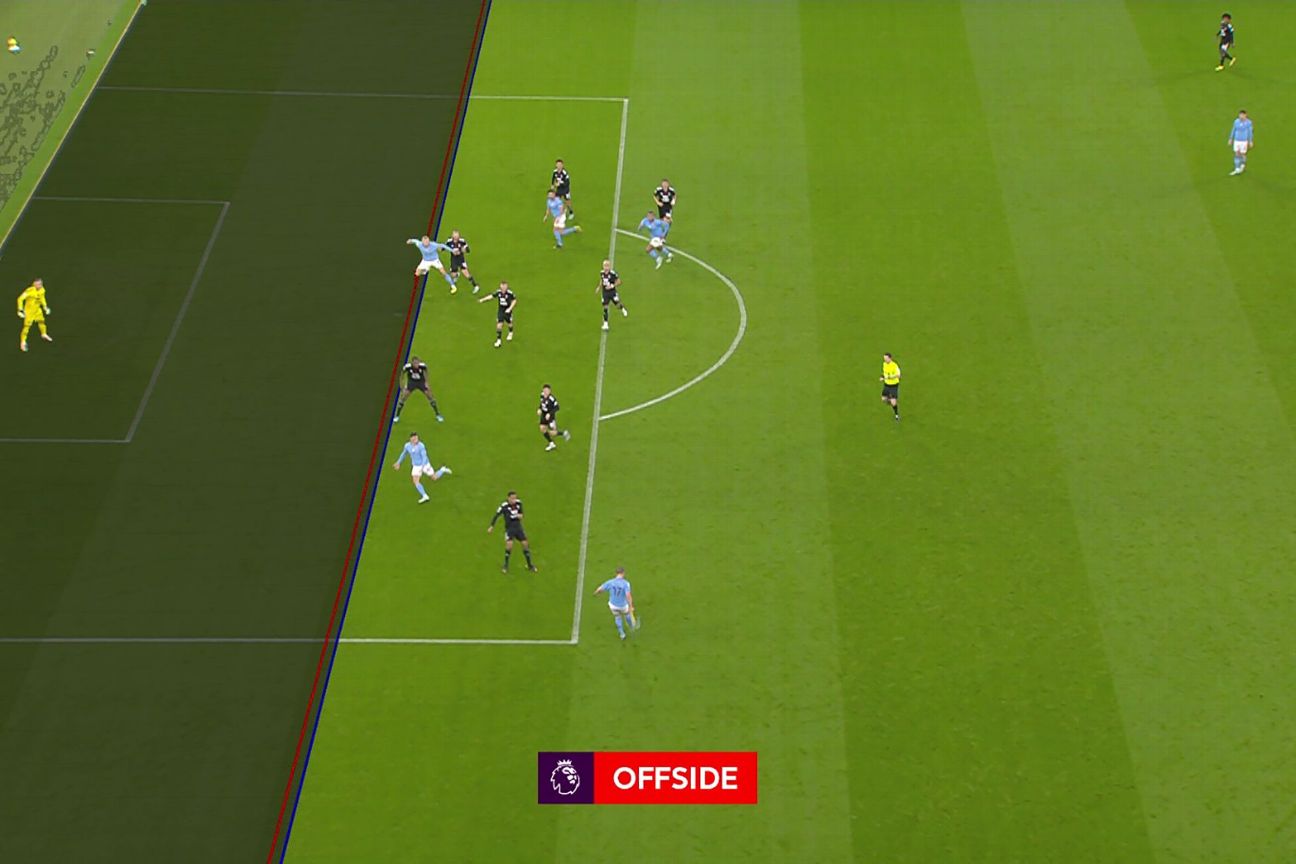 What happened: In the 44th minute, Yoane Wissa tried to take the ball past goalkeeper Dean Henderson and went down. Referee Andre Marriner gave a goal kick to Forest.

VAR review: This was one of four penalty claims in the game -- three for Forest and one for Brentford. Forest boss Steve Cooper was apoplectic that the only VAR overturn went against his team, while Henderson was close to receiving a second yellow card for the way he reacted -- both before and after the spot kick was taken.

We've talked already about the level of contact, and the reaction of the attacker, and all this comes into play here. It's also why the decision to give Brentford the penalty goes against PGMOL's desire not to give soft penalties through VAR intervention. Of course, a subjective argument can be put forward for the decision by the VAR, but that doesn't mean he should be getting involved.

Did the contact from Henderson cause Wissa to go to ground? The VAR, Lee Mason, decided it was enough to knock him off balance. He may also have given it because Wissa tries to stay on his feet, with no exaggeration in the way he goes to ground. But contact was minimal, and it's not the first time Mason has become involved in a VAR overturn when it wasn't necessary.

Mason was correct not to get involved in the other three incidents, but if all four have gone against your team, one resulting in conceding a goal, you can fully understand the frustration from Forest.

In the 13th minute, Mathias Jensen challenged Emmanuel Dennis. Marriner waved play on in this incident, but if anything it could have been a free kick to Brentford as Dennis had caught the midfielder with his studs above the ankle first. Even without the possible foul on Jensen, the fall from the striker was very much exaggerated. There are comparisons to made with the decision given to De Bruyne, as he too produced theatrics to win the penalty -- the important factor being the decision was made by the referee and not the VAR.

Step forward to the 30th minute, when Josh Dasilva placed an arm on Ryan Yates, but the Forest midfielder went down easily. It's doubtful that the force used caused Yates to go to ground in the way he did, and for this reason the VAR is unlikely to get involved, whichever way the referee has chosen to go.

The final penalty claim for Forest came in the 70th minute, Morgan Gibbs-White going down under a challenge from Ben Mee; the Forest player appears to bring his right foot across to initiate the contact with the defender. Again, no VAR intervention is understandable.

The best outcome would have been no penalties in any of these four situations.

What happened: Mathias Jorgensen put through his own goal six minutes into stoppage time but there was a check for offside against Yates.

VAR review: The VAR had two things to take into account -- was Yates in the line of vision of the defender on the line, Mee, or did Yates challenge for the ball? He cannot be offside just by his position.

Mee had a view of the ball and was able to make an attempted clearance. When the ball looped back toward goal off Jorgensen, Yates could still have been given offside as Mee's clearance doesn't reset the phase, but the Forest player did not directly challenge the Brentford defender.

What happened: West Ham were awarded a penalty in the 81st minute when Michail Antonio went down under a challenge from Marc Guehi.

VAR review: Referee Paul Tierney felt that Antonio had been pulled back by Guehi, but it was clear from the replays there was no contact of any note.

There's a strong case for Antonio to be booked for simulation for the way he goes to ground, and that option is open to Tierney at the monitor. But Chelsea's Callum Hudson-Odoi is the only player to be booked on a penalty overturn since VAR came into the Premier League.

What happened: In the 80th minute the ball struck the arm of Marc Cucurella, referee Michael Oliver allowed play to continue.

VAR review: The handball was on the blind side of referee OIiver, so it's understandable he may not have seen it. The decision for the VAR, Jarred Gillett, is about proof that the handball happened inside the area and not outside.

The rear view created enough doubt that the handball took place outside, which means the VAR cannot get involved. That Cucurella's feet were inside the area is irrelevant, only where the ball is when it touches the arm matters.

What happened: In the 64th minute, Lisandro Martinez was trying to guard the ball out for a goal kick when he appeared to throw an elbow into Leon Bailey.

VAR review: There's no doubt that Martinez took a huge risk in the way he challenged Bailey, who was furious with the defender's actions after the game. But there isn't enough in this for the VAR to get involved and review it for a red card. It looks far worse in slow motion, and in full speed there's very little in it.

What happened: In the 35th minute, Daniel Podence tried to hook the ball across the area and appealed for handball against Lewis Dunk. Referee Graham Scott waved play on.

VAR review: The only question for the VAR was whether the ball touched Dunk's arm, as it's high in an unnatural position. This comes down to the burden of proof and the VAR, John Brooks, decided there was the evidence that the ball touched the arm.

What happened: Wolves defender Nelson Semedo was sent off in first-half injury time for DOGSO when fouling Kaoru Mitoma.

VAR review: This could be seen by some as a borderline call for a red card, because Mitoma is in a wide area. However, the Brighton forward got an important touch to take the ball into the box toward goal, creating the goal-scoring chance with the goalkeeper inside his six-yard box and unable to get to the ball first. For that reason it wouldn't be considered a wrong decision to show the red card.