The 2022-23 Premier League season is 146 games old, and the effects of VAR decisions across the season are now telling. Liverpool have seen some key games swing in their favour after intervention from the VAR, leading to a dramatic fall in the table when such decisions are removed.

Last season, our VAR Effect Table showed that Arsenal would have qualified for the Champions League in place of arch-rivals Tottenham Hotspur if it hadn't been for VAR. So far this season, Arsenal have lost only one game -- though the VAR had a huge say in that, and without it, they'd still be unbeaten -- but Manchester City would actually be within three points of them at the summit.

Like we did last season, we're looking at all VAR decisions across the Premier League, and seeing how they might have affected the outcome of games.

It's not just about the number of times a team gets a favourable VAR call or about how many goals are affected. What's more important is when these VAR decisions take place and, crucially, whether that impact would ultimately have changed the final score.

ESPN brings you the VAR Effect Table. We've taken all 48 VAR overturns in the Premier League so far this season and calculated how they might have influenced matches. We'll continue to track VAR throughout the season and find out who the true winners and losers are.

How we work out the VAR Effect Table

We take only the first VAR overturn in each game, because the calculation considers that any subsequent VAR incident wouldn't have happened because the whole direction of the game has been altered. (Think of it like a Marvel timeline, or the plot of any time travel movie.)

The VAR decision is then reversed to the original on-field call -- so if a goal is disallowed for offside, it's given as a goal.

If a penalty has been cancelled, it is considered to have been awarded and scored, unless the team in question has a penalty-conversion record below 50% over the season. For instance, Crystal Palace have failed to score from the penalty spot this season, missing both spot kicks. If below 50%, a penalty may be judged to have been missed.

If a team has been awarded a goal through a penalty or an incorrect offside through VAR, the goal is disallowed.

We then take into account a series of factors before settling on a predicted outcome:

Team form: Results in the previous six matches give an indication of how a team has been playing generally.

Time of incident: For instance, if an incident happens late in the game, it's less likely that the scoreline would change again after this point.

xG at time of incident: This allows us to take into account which team has been creating the better chances and is in the ascendancy.

Team strength: As well as form, a team's general strength plays a part. This takes into account league position, and a team's goal-scoring and defensive records across the season.

Impact of incident: For example, a red-card decision being reversed may change the outcome of a match.

These results have then been used to modify the table and work out what impact VAR has had on teams' positions this season.

The table shows each team's position after the amended results, with the arrows indicating if their league position is better or worse without VAR. Not all teams have played the same number of games due to postponements. 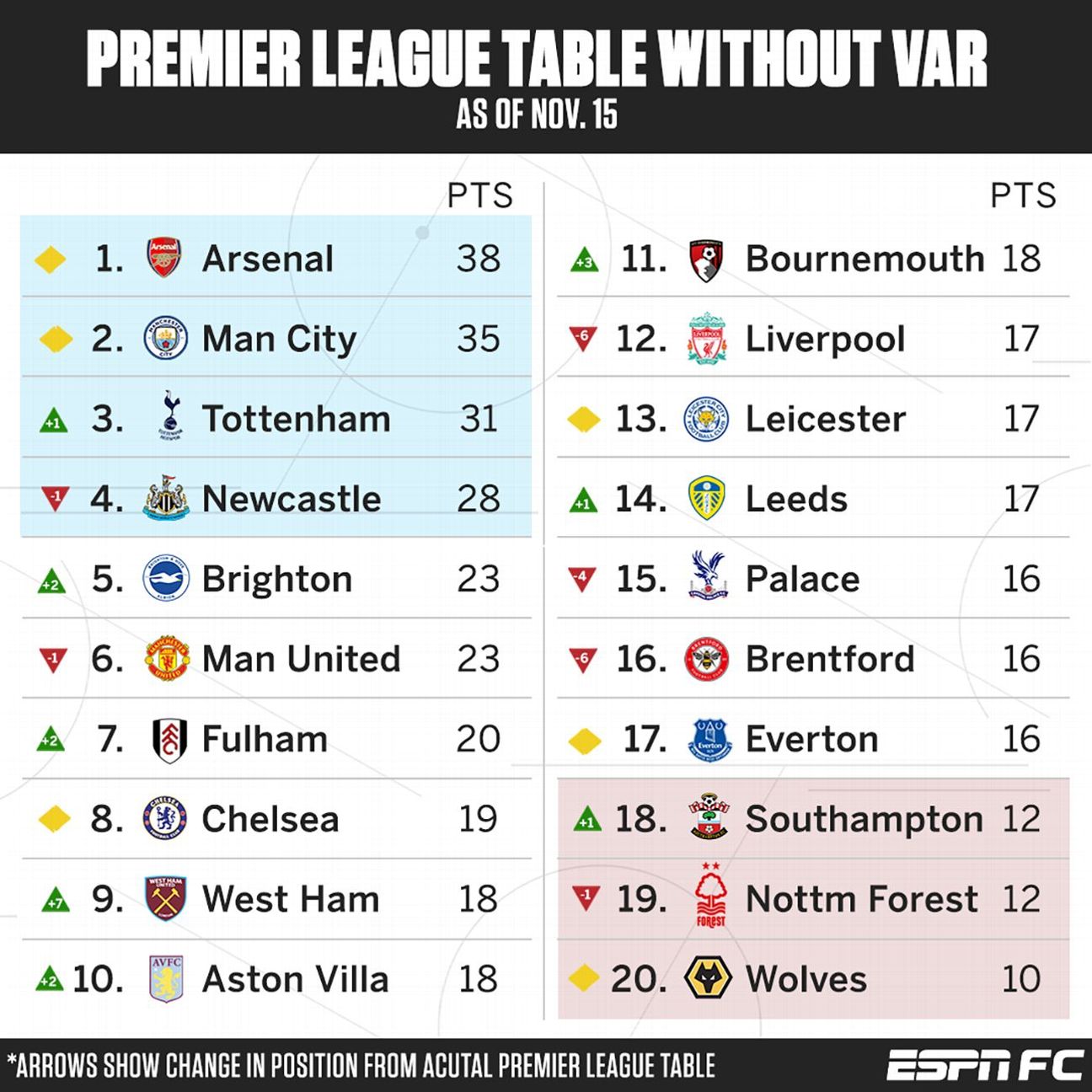 The big losers without VAR

Look away, Liverpool fans, because Jurgen Klopp's team are sent spiraling down the Premier League table once VAR interventions are removed. The Reds drop five points, and six places -- tumbling from 6th to 12th. They are closer to the relegation places (five points) than they are to the Europa League place (six points.)

So, why do Liverpool drop so far? It's really about when and who against the key VAR decisions came. It was 0-0 in the 53rd minute against Manchester City at Anfield when Phil Foden had a goal disallowed for a foul in the buildup by Erling Haaland on Fabinho. Although Liverpool went on to win the game 1-0, all events from that VAR intervention are cancelled and it continues as though City have a 1-0 lead -- which they hold on to. It creates a six-point swing between the two teams; in fact, our VAR table has Liverpool a huge 18 points behind City and 21 adrift of league leaders Arsenal.

Liverpool lose another point when the 3-3 draw at home to Brighton becomes a loss, with the Reds awarded a goal to Mohamed Salah after an offside review. They also lose the Merseyside derby to Everton, with that 0-0 draw being secured after the VAR ruled out a Conor Coady goal for offside.

Next up it's Manchester United, who lose three points without VAR -- but only one game sees a result changed. Arsenal had a goal disallowed by the VAR which would have put them in front at Old Trafford, a match which is now calculated as an away win. After sitting just outside the Champions League places in fifth, they fall one place to sixth -- the gap to the top four grows from three points to five.

Brentford slump down the league in a similar fashion to Liverpool, falling six places from 10th, sitting two spots above the relegation zone with a four-point cushion. The Bees had a key VAR penalty decision go in their favour in the win against Leeds when it was 0-0, while Nottingham Forest conceded a VAR penalty when they were leading at home to the west London club; that draw becomes a Forest win, meaning Brentford lose a total of three points.

Crystal Palace also lose three points without the VAR. The key decision for the Eagles came at West Ham earlier this month, when the VAR cancelled a late Hammers penalty when the score was 1-1 and Patrick Vieira's side went on to win -- which is now counted as a loss. They also benefitted from Newcastle having a goal disallowed by the VAR in a game which finished goalless. They did have a VAR decision go against them at the weekend when Forest's winner came after an offside review.

Another team with Champions League hopes, Newcastle United stay in the top four but lose two points without VAR. The Magpies have been involved in VAR more than any other club this season; they were awarded a penalty against Bournemouth when trailing (draw becomes a defeat, -1), Fulham had a player sent off in the fifth minute when the score was 0-0 at Craven Cottage (win becomes a draw, -2), and Wolves had a goal disallowed to go 2-0 up in a match which finished as a draw (-1). That's a total of four points gained through VAR, but that one decision which went against them in a 0-0 draw at home to Palace takes two points away.

Chelsea also lose two points with VAR but are unchanged in eighth. The only decision which affected the Blues' results was West Ham's disallowed late equaliser at Stamford Bridge when Jarrod Bowen was penalised for a foul on goalkeeper Edouard Mendy.

Completing the list of teams who lose out without VAR are Nottingham Forest, with a net loss of one point. Steve Cooper's men would have been winners without VAR until Morgan Gibbs-White's disallowed goal against Brentford was overturned, giving Forest a victory when the game was headed for a draw. 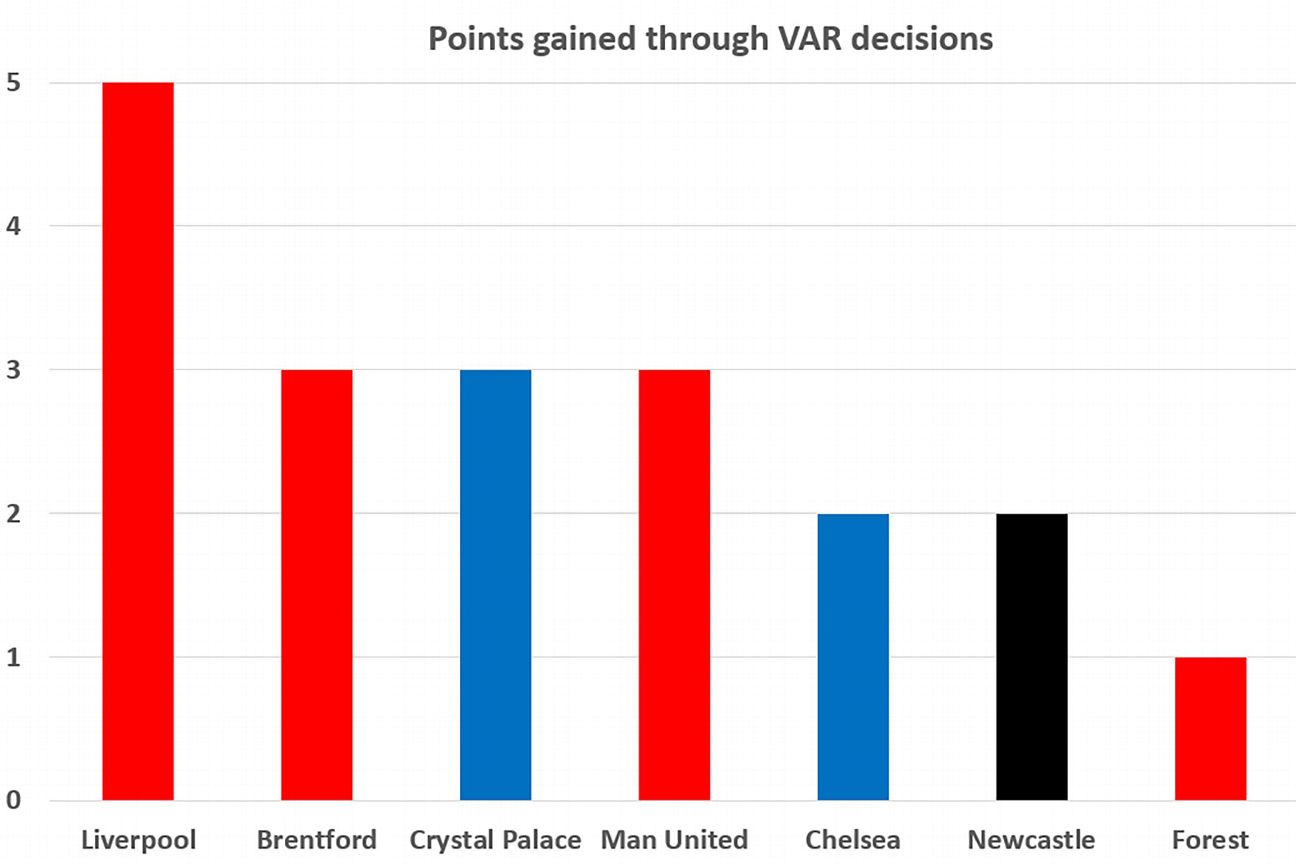 The big winners without VAR

West Ham United haven't had a great season, even manager David Moyes would admit that. But it looks like it could have been a lot better, with the Hammers soaring up the table once VAR decisions are removed; climbing seven places from 16th to ninth, with an extra four points. Moyes' men go from one point above the relegation zone to a six-point cushion.

Even though they benefitted from a cancelled Spurs penalty in a draw at the London Stadium, other decisions have gone against them. The VAR disallowed West Ham goals in a 1-0 defeat at Forest and a 2-1 loss at Chelsea, and cancelled their late penalty against Palace when the score was 1-1.

The next team to suffer from VAR are title challengers Manchester City, who get three points back. Only one result is affected by the VAR, with that loss at Liverpool becoming a victory.

As a result, Arsenal see their lead over City at the top of the Premier League cut from five points to three. Arsenal's win at Leeds becomes a draw, after the home side had an injury-time penalty cancelled by the VAR, costing them two points. But the loss at Man United, when the Gunners had a goal disallowed early in the game, becomes a victory -- a net gain of one point over the season.

Tottenham Hotspur gain two points without VAR, which edges them above Newcastle into third place, with draw at West Ham becoming a victory after the VAR cancelled a penalty for an incorrect handball.

Into the European places are Brighton & Hove Albion, up two places to fifth with a gain of two points thanks to that draw at Liverpool becoming a win. AFC Bournemouth also get two points, which moves them up three places into 11th.

There's some relief for Frank Lampard's Everton, with the two points they receive increasing the gap to the relegation zone from one point to four. They gain two points from Coady's offside goal in the draw at Man United. Leeds United get two points, too, moving up one place into 14th.

Fulham, up one point and two places into seventh, are the final team to benefit without VAR. 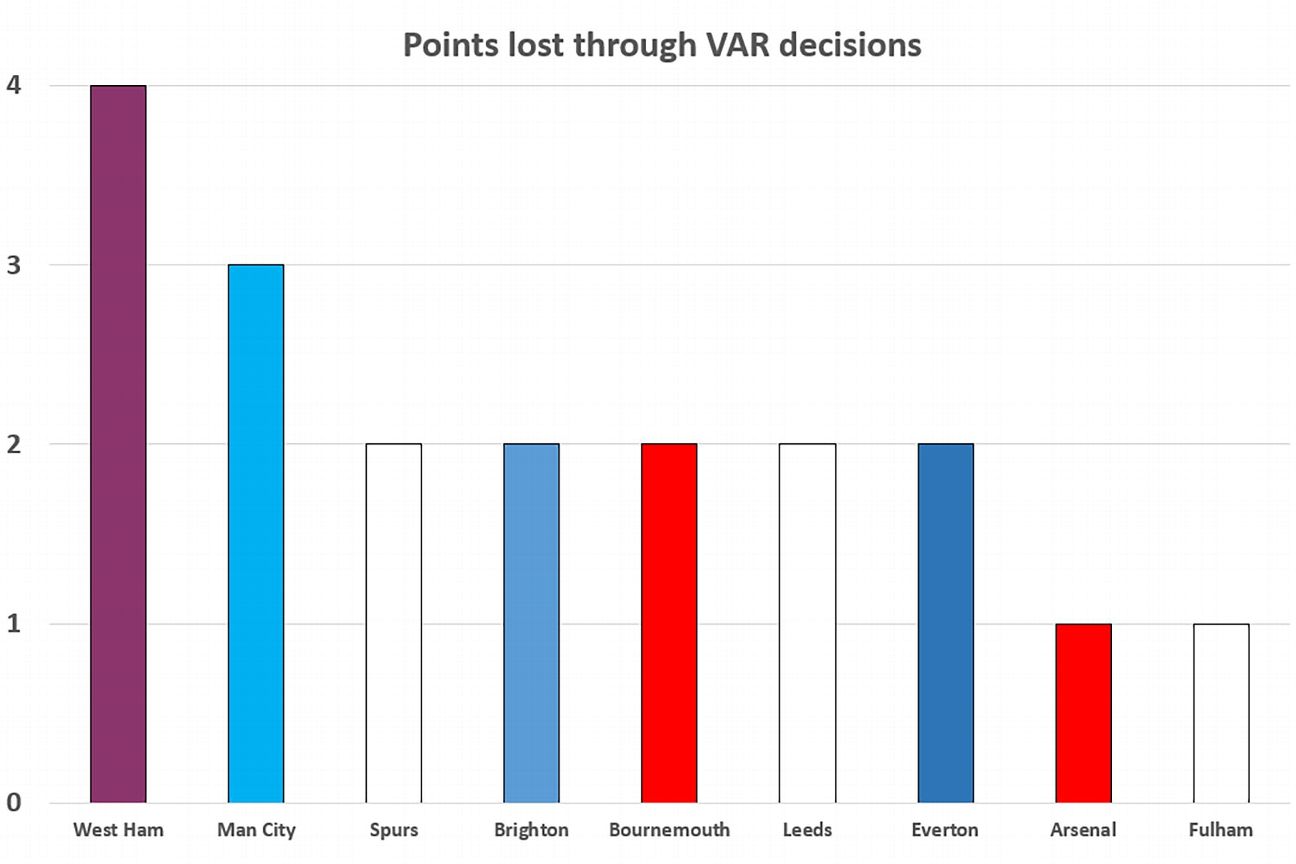 Aston Villa, Southampton and Wolverhampton Wanderers are the only teams to remain on the same points.