Despite being grouped with 2015 African champions Ivory Coast, Morocco went unbeaten during the CAF qualifying campaign and did not concede a goal across their six matches. But they started slowly, drawing three of their first four matches 0-0. The highlight of qualifying was a Hakim Ziyech-inspired 6-0 demolition of Mali in September, and they secured their spot in Russia by beating Gabon 3-0 in their penultimate game.

Renard has demonstrated throughout his managerial career that he knows how to construct watertight defensive units, at least at the international level. The personnel at his disposal with the Atlas Lions has allowed him to build a side that concedes few goals. With Medhi Benatia in the centre of the defence, and Karim El Ahmadi protecting the back line, it will be fascinating to see how their Group B opponents try to break them down.

Earlier in Renard's tenure, there were concerns about who could step up as the team's goal getter, but Khalid Boutaib came good with four during qualification, including a hat trick against Gabon, and will be a handful leading the line. Twelve goals in 29 appearances in the Turkish Super Lig this season is a decent return, too. Still, at 31, Boutaib is one of several key players -- along with Mbark Boussoufa, Karim El Ahmadi, Nordin Amrabat, Aziz Bouhaddouz, Nabil Dirar, Manuel da Costa and Medhi Benatia -- on the wrong side of 30, and it will be intriguing to see how well they can chase a game against Portugal or Spain if they fall behind. The biggest concern for Morocco is a particularly tricky draw which leaves them needing to pull off at least one big upset to progress.

Hakim Ziyech appears primed for a big move this summer after another excellent season in the Eredivisie. He's been linked with a move to the Premier League in recent transfer windows -- Everton are his latest suitors -- and a strong tournament should see interest in his services increase.

The Ajax midfielder has made 23 decisive contributions in the Dutch top flight so far this season (nine goals, 14 assists), and his showing in Morocco's 6-0 rout of Mali was arguably the best individual performance of any African player during the qualifying campaign.

"The Atlas Lions are ready! Mentally, physically, they know that they have all they need to win. They've qualified in heroic fashion, have touched all of the nation, and have capsized millions of hearts. Their togetherness, their courage and their ambition give them the right to dream. Thanks to Herve Renard, we can believe in qualification for the second round." -- Oumeima Er-rafay, 360.ma

"The main quality I find in this team is its defensive solidity in the games that matter. Morocco finished first in their group without conceding, in a group containing Ivory Coast, Mali and Gabon [even if Pierre-Emerick Aubameyang didn't play every match]. It's a performance which demands respect." -- Ali Farhat, So Foot

"A team that didn't concede a single goal during qualification isn't going to be an easy team [to beat]. It's a squad where there's a blend of defensive solidity and experience, and which has a soul, and a coach who knows how to unite people around him." -- Jalal Bouzrara, Medi 1 TV 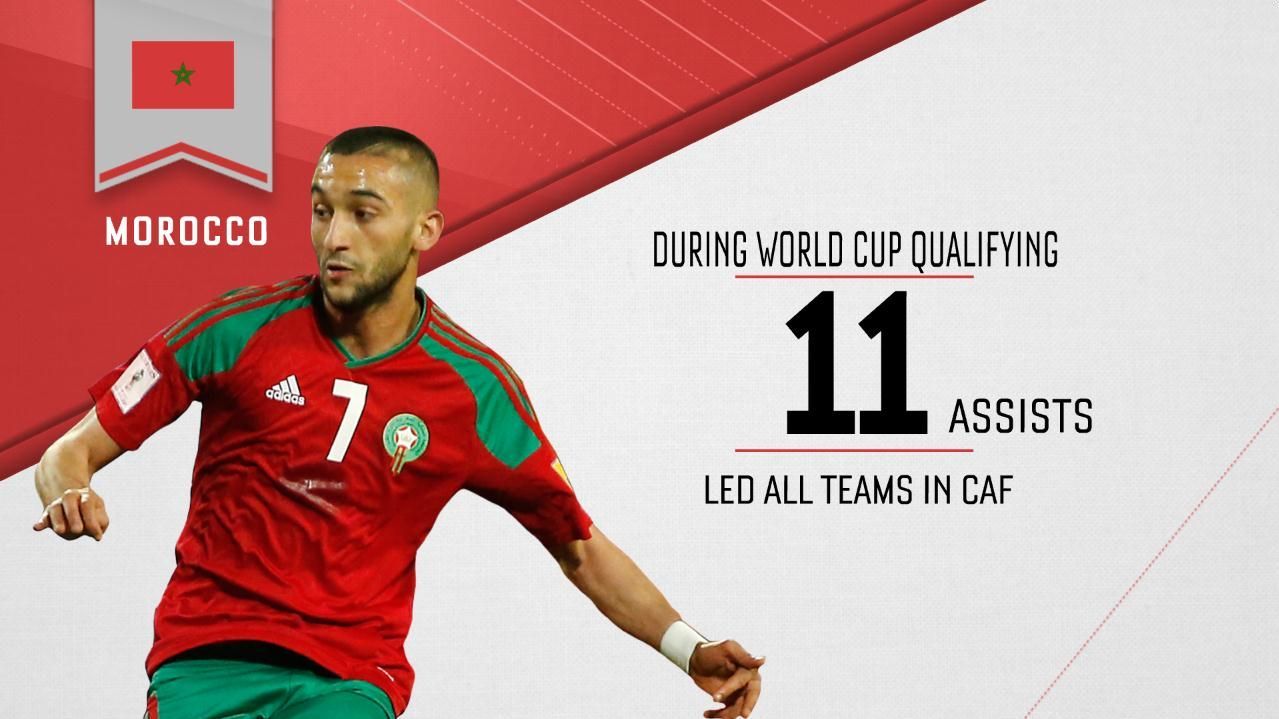 Had Morocco been drawn into Group A or H, where Egypt and Senegal landed, their fans would be expecting a spot in the knockout stages -- such is the superb organisation of this team and its wealth of options further forward. Had the Atlas Lions reached the final 16, then Renard's tactical acumen and track record in knockout football could have seen them take a further scalp or two.

However, after being pitted against Portugal and Spain in Group B, it's hard to see them escaping the opening round. An opening-day win against Iran in St. Petersburg on June 15 is surely imperative, and after that they'll need to mastermind a victory over one of the two European heavyweights.

It's a tall order, even if recent friendly victories over Uzbekistan and Serbia augur well.