Who should be blamed for the United States' World Cup qualifying failure? Do young American players get sufficient playing time in MLS? Do you favor promotion and relegation in the league?

During preseason ahead of the 2018 campaign and on the condition of anonymity, we asked these and other hot-button questions to 104 current players in our fourth annual MLS Confidential (previous results: 2015, 2016, 2017.)

These players represented 22 of the league's 23 clubs -- for the second consecutive year, New York City FC was the only team that declined to participate -- and, as you'll see, they didn't hold back. 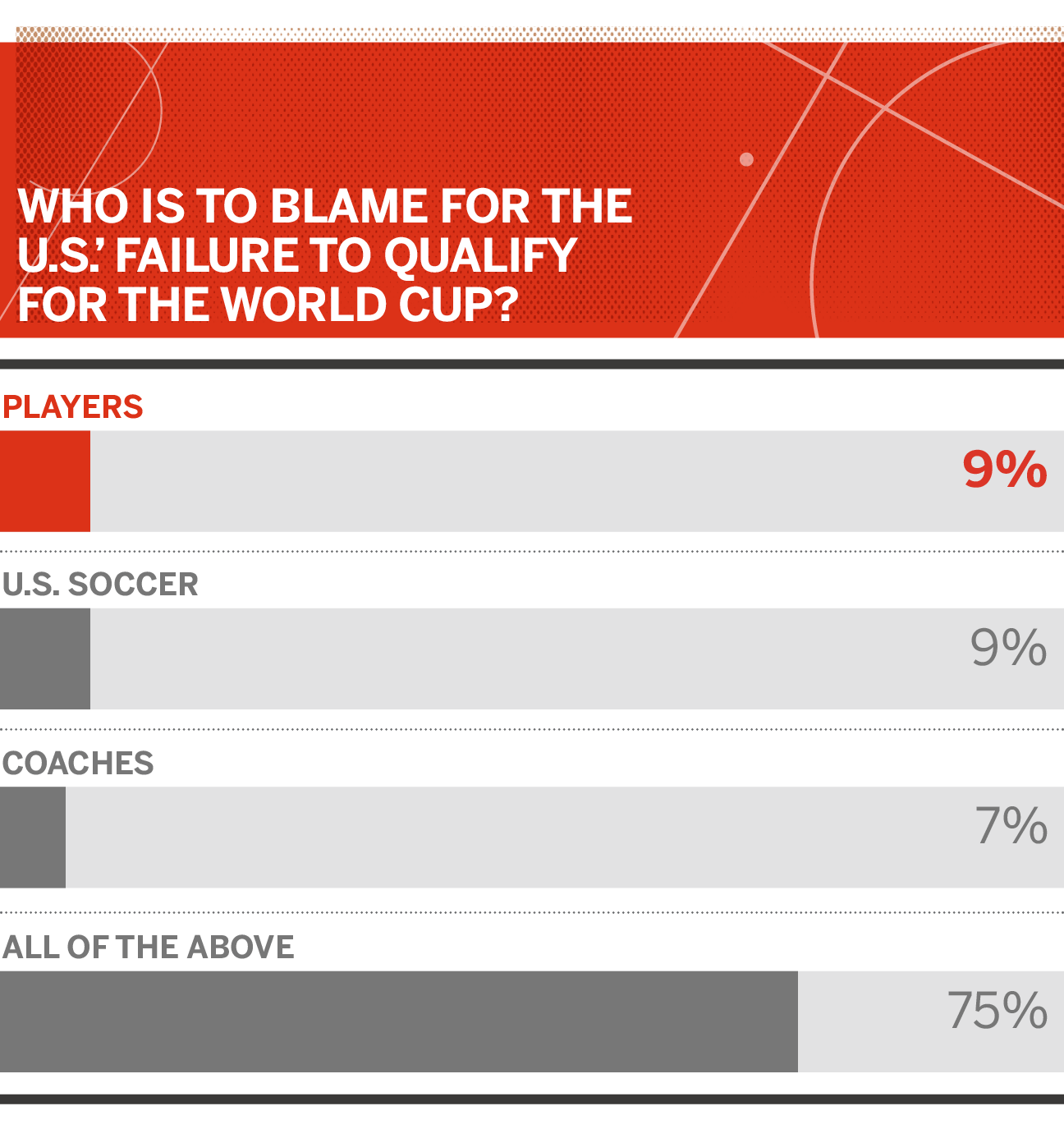 "I am a big believer in the people who are on the field. Sure, coaching plays a role, but whether a player misses a shot or scores, it's on the player, not anyone else."

"Some people may say U.S. Soccer is [at fault], but I think the guys who are on the field need to get the job done when they should win. [Trinidad and Tobago] is a team we should beat 10 out of 10 times."

"The players were not good enough and forgot what it meant to wear the U.S. shirt. The coaches didn't look like there was a system in place. The whole structure and the way they elect coaches -- some of the things they do -- everyone played a fair part in it."

Do young American players get sufficient playing time in MLS?

"I think they will [get more chances] the better the youth system gets, but not now. There's still too many spots filled by international players." 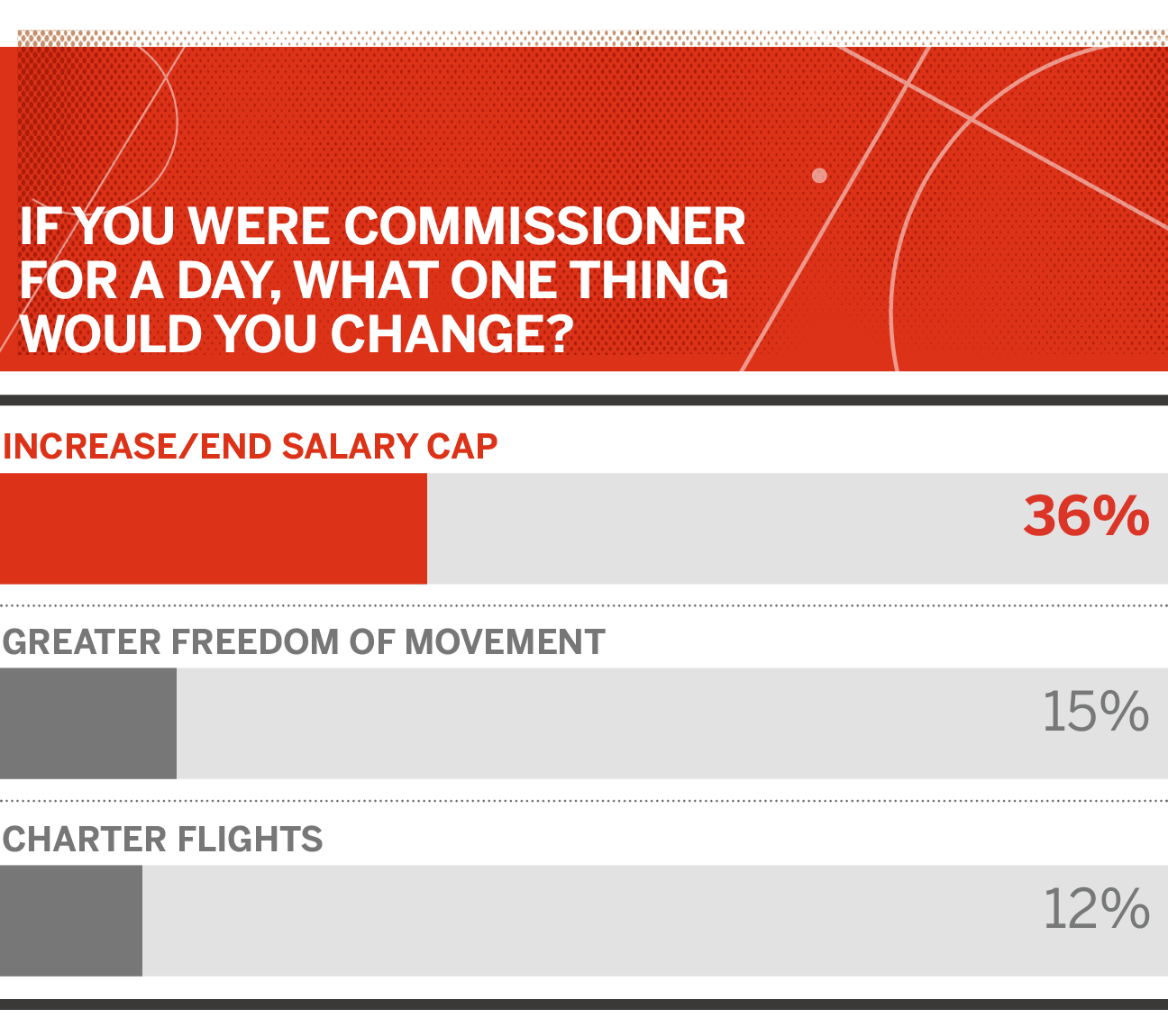 "I'd implement a rule [in which] a percentage of young Americans under age of 21 has to get a certain amount of minutes during the year. ... In Mexico, they have the 9/9 rule, where you have to have at least nine Mexicans on the game-day roster."

"I would remove all restrictions on how owners spend money."

Do you favor promotion/relegation in MLS?

"To play on a team that's fighting against relegation, it makes games mean something. In MLS, where we haven't made the playoffs, those games are dumb at the end of the year. Because people just tune out. Fans tune out."

"Fundamental changes need to happen in the league before pro/rel is feasible. A viable second division doesn't exist yet. Relegated teams would fold."

"It's something underneath you, a spark always on your butt. It makes every point so much more meaningful."

"It unstabilizes ownership groups and creates [a similar issue] for players." 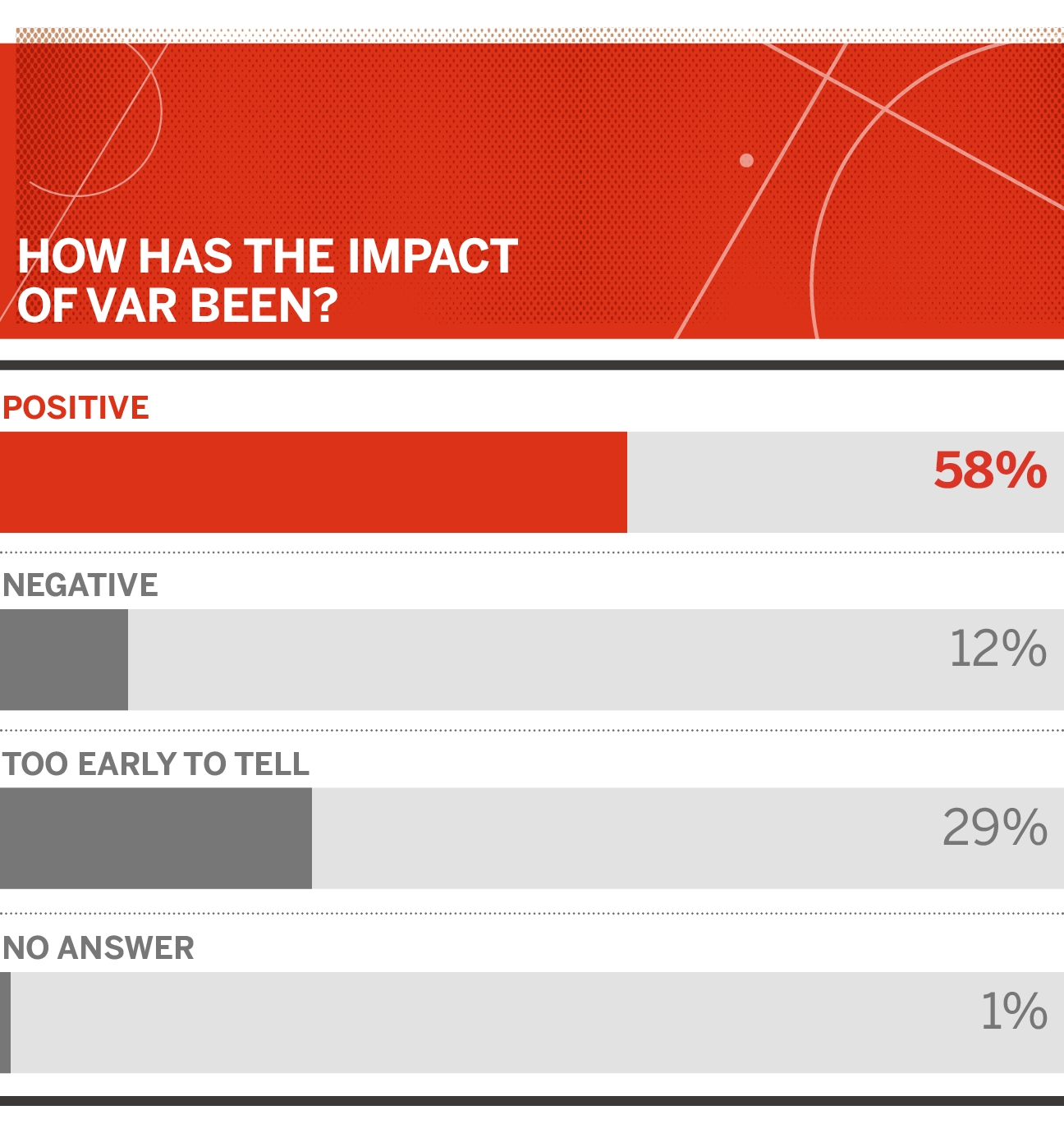 "It takes accountability away from referees and slows the game down."

"I like how it's not every aspect, so I don't have a problem with it."

"The one negative I have with it as a player -- and in the future, as a fan -- is not quite understanding when it's going to be used and the time it takes to be used."

Should the playoff system be revised?

"I would shorten the regular season by two weeks and keep the same number of teams that qualify for the playoffs, but schedule [postseason] games in consecutive weeks."

"It's way too long. I also think the regular season should be more rewarded, so the 12th-best team after 34 games can't win it all."

"It should be shorter because there are huge breaks, which kills the momentum, and you kind of forget the playoffs are going on unless you're an avid follower of the league." 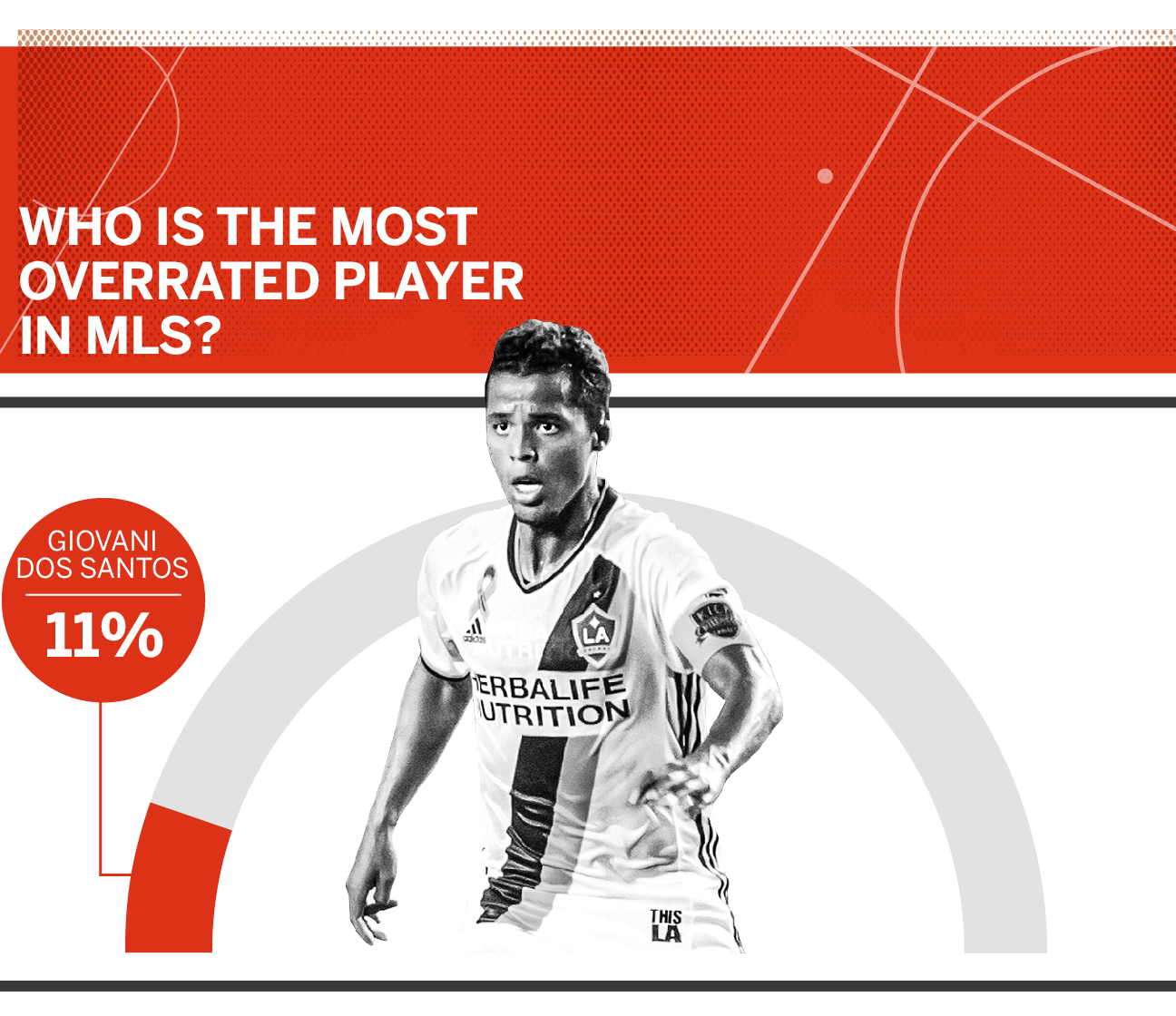 "[Dos Santos] is a good player but I think the American media overhype him, based on his past experience with Barcelona and Tottenham Hotspur instead of his MLS performances. I think he's a player who sells a lot of tickets for the Galaxy because of the large Mexican community in LA but I don't think he has the same impact on the league as players like David Villa and Sebastian Giovinco."

"I would pick [Dos Santos] because he's the leader on the team that finished last in MLS in 2017."

"It was easier with Mix [Diskerud] and [Frank] Lampard and even [Andrea] Pirlo. Before it was easy. Me answering like that is probably a good sign for the league.''

"If you look at it, Dax McCarty isn't far off [Bradley], and sometimes he's played better, and he makes a lot less."

"I don't think [Altidore] lived up to everything that people built him up to be. He was in the right place at the right time, and his career exploded, and he rode that wave."

(On Nemanja Nikolic, who polled 3%) "He's Golden Boot, so I know it's kind of an odd answer, but I think he could have a regression to the mean this year."

"I think [Piatti is] a top-five player in the league."

"The things [Trapp] does on the field don't get noticed. He's the gel that keeps things going." 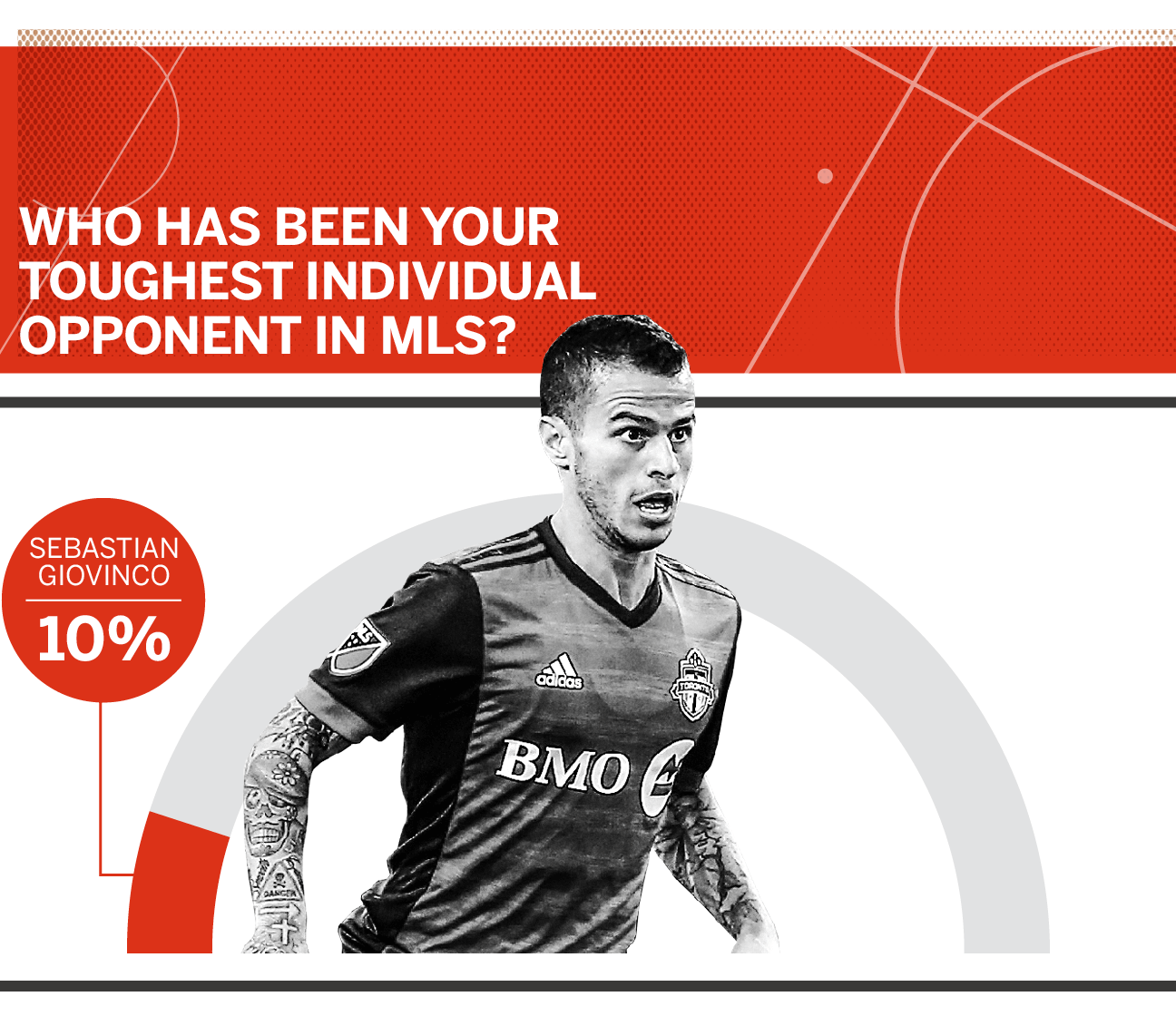 "With Villa, his craftiness on the ball [means] you never know what he's going to do."

"It's always a mental game with [Parkhurst], even more than the physical duels. He does that better than anyone in the league."

"I've heard people talking about it, and I've just been nodding my head, but I don't have a clue."

"I consider myself very literate with the roster rules and restrictions but still learn something new every week."

"MLS just made these rules to profit European or South American players coming, f---ing over the college players and the players who have been in the league for a while." 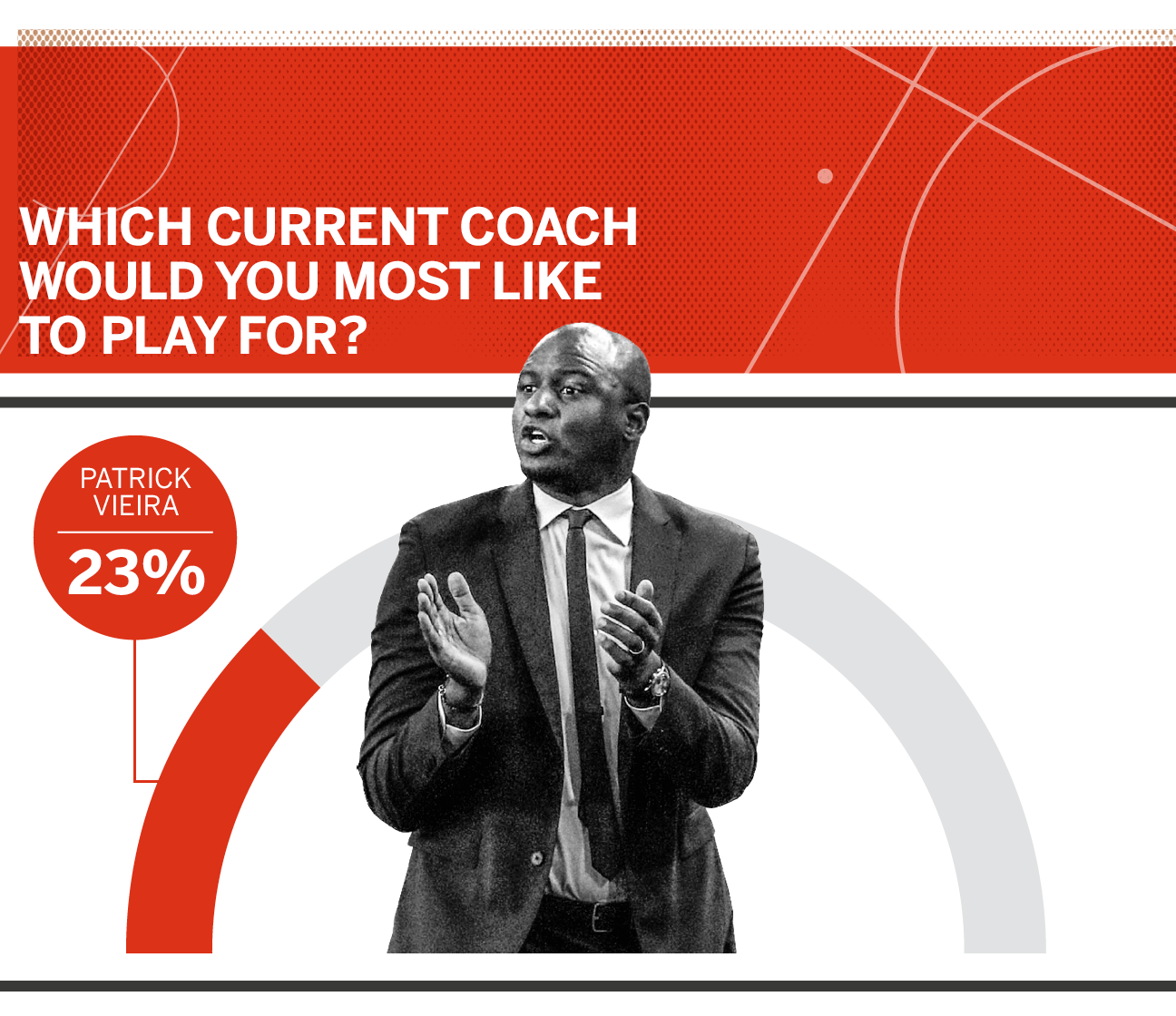 "Vanney. Toronto is a team of leaders and guys who are definitely invested in the direction of the team and drive that team forward, but it takes a certain type of manager to bring all those leaders together."

"Vieira because of all the experience he's had winning things." 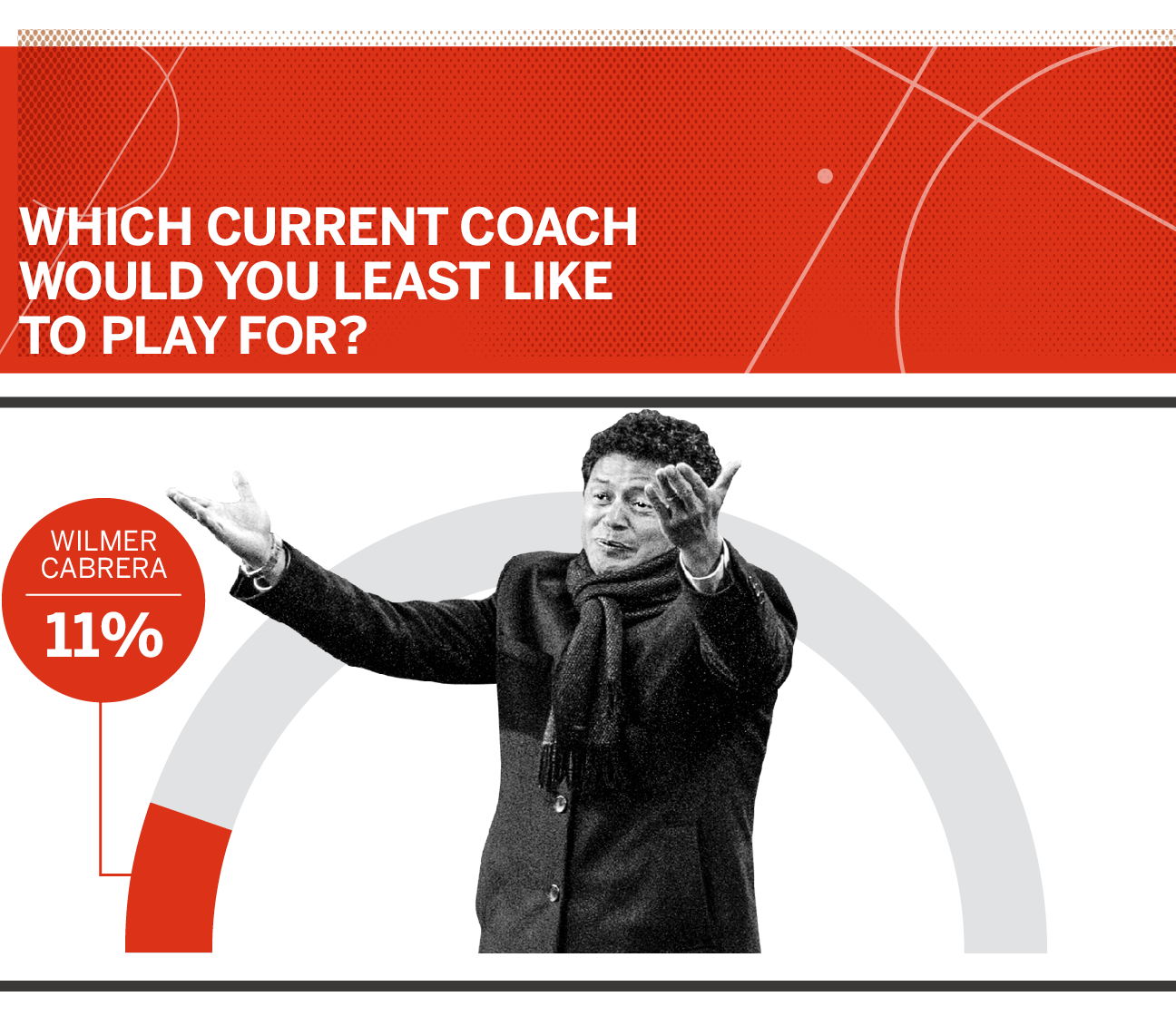 "I don't think myself and a handful of players saw eye-to-eye with [Cabrera] and, in return, basically never saw the field. I think maybe he was a grudge holder."

"[Olsen is] a pretty good motivational, but I need someone to give me the tactics and X's and O's."

"Whoever is coaching New England -- doesn't matter which coach it is."

Are you happy with MLS' salary structure?

"It is getting better, but there are still huge gaps between players that might be coming from different countries that are getting paid more than players who have maybe contributed more to this league and are kind of getting screwed over in that sense."

"I think the way they do it is good, actually. It's more fair. I came from [overseas] where you have [a few teams] with much more money than everyone else, so they win the league every season."

"There needs to be a higher cap and more compensation for players. It is ridiculous that a player makes $70K. A pro athlete should be better compensated." 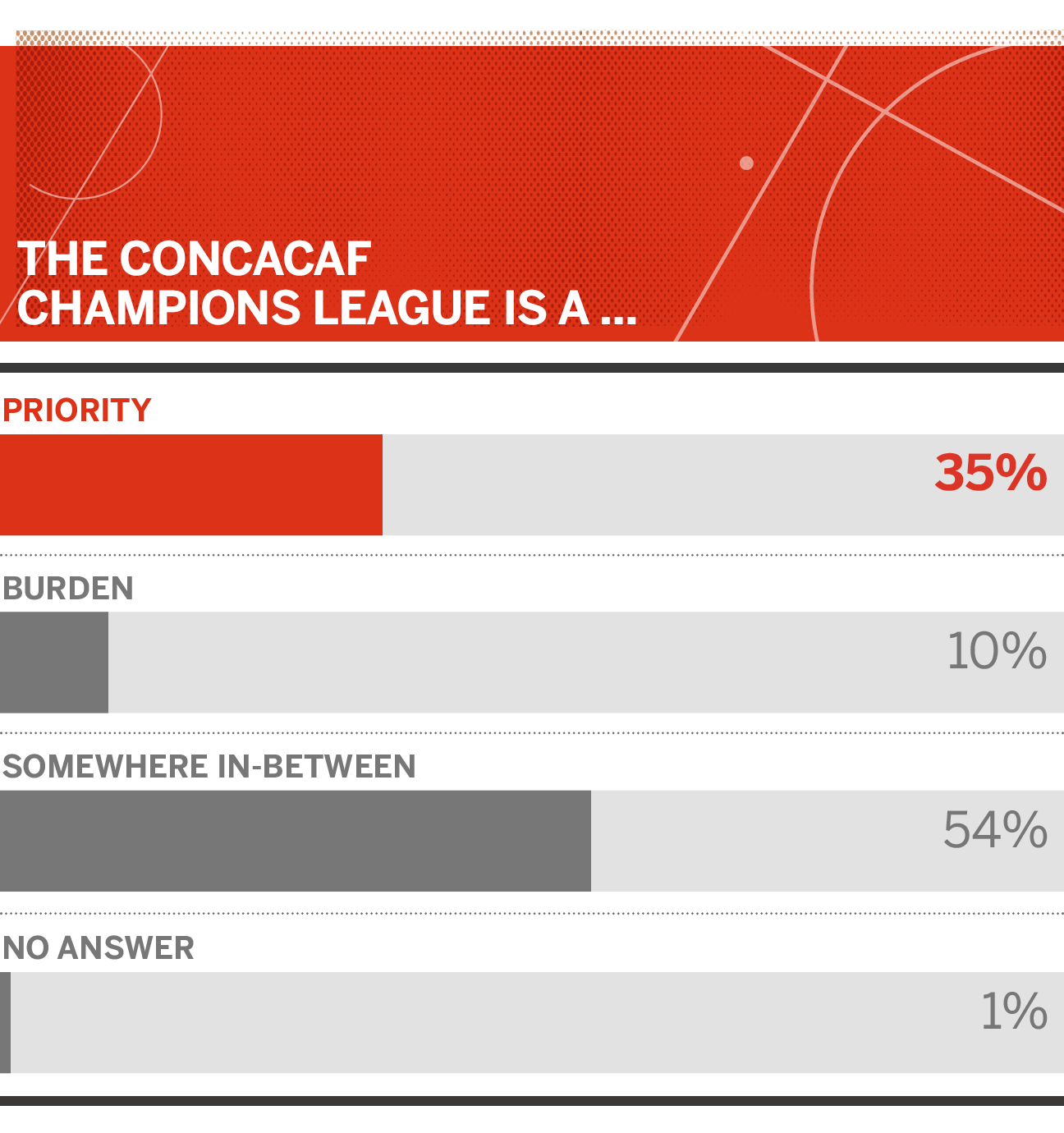 "It depends on the team. Some take it very seriously, some not at all. There needs to be more of a financial incentive for players and teams."

"It should be a priority, but with the way things are scheduled, you've played for two weeks against a team that's been playing for months."

"I think if we won that, it [would] be more important than winning MLS Cup. You would just go down in history. Winning MLS Cup is huge, but nobody's won CONCACAF yet, so it would be a historic team."

"It's hard to get a new guy or 10 new guys coming into a new team in January pumped up about something that they didn't have any effort in making us get there."

If a stadium had an artificial surface, would it impact your decision to join that team?

"No. As long as they train mostly on grass."

"Hard yes. I don't like turf, plain and simple. The times I played on it, it takes a day or two extra to recover." 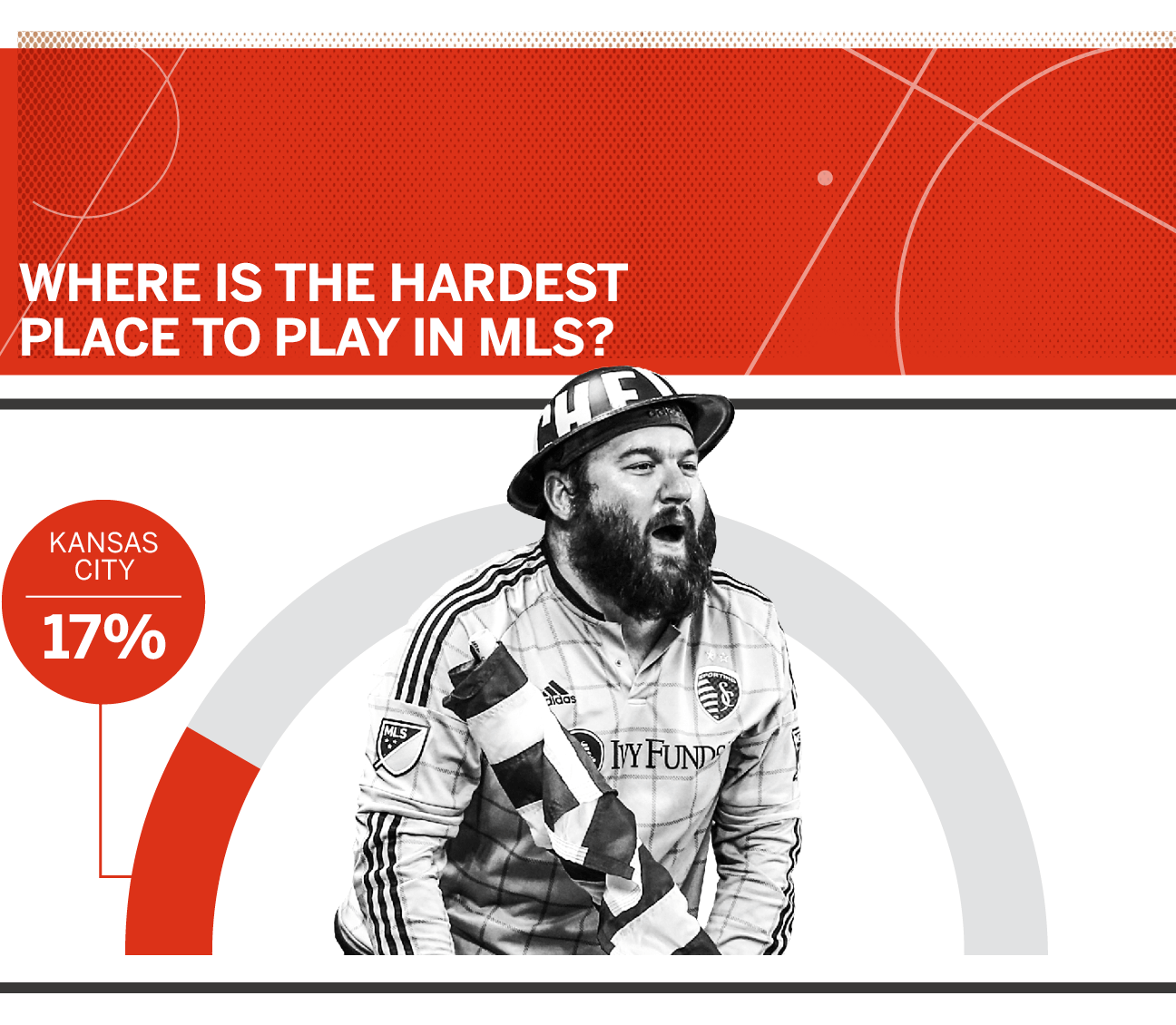 "[Kansas City because of] their fans. And the way they play: It's nonstop from the first minute 'til the end."

"Portland. It's the best environment in MLS."

"Houston. The heat, the humidity, no fans, the grass isn't great."

"I always think New England is tough because the crowds are pretty small, and the field's not great, and it's just a weird vibe going into that game."

Should MLS switch to the international calendar?

"Not unless Chicago/Minnesota/Toronto/etc. were forced to build indoor stadiums."

"There's more fluidity with it, and it runs parallel to every big country. We have to always be different in everything we do, and there's no reason to be different." 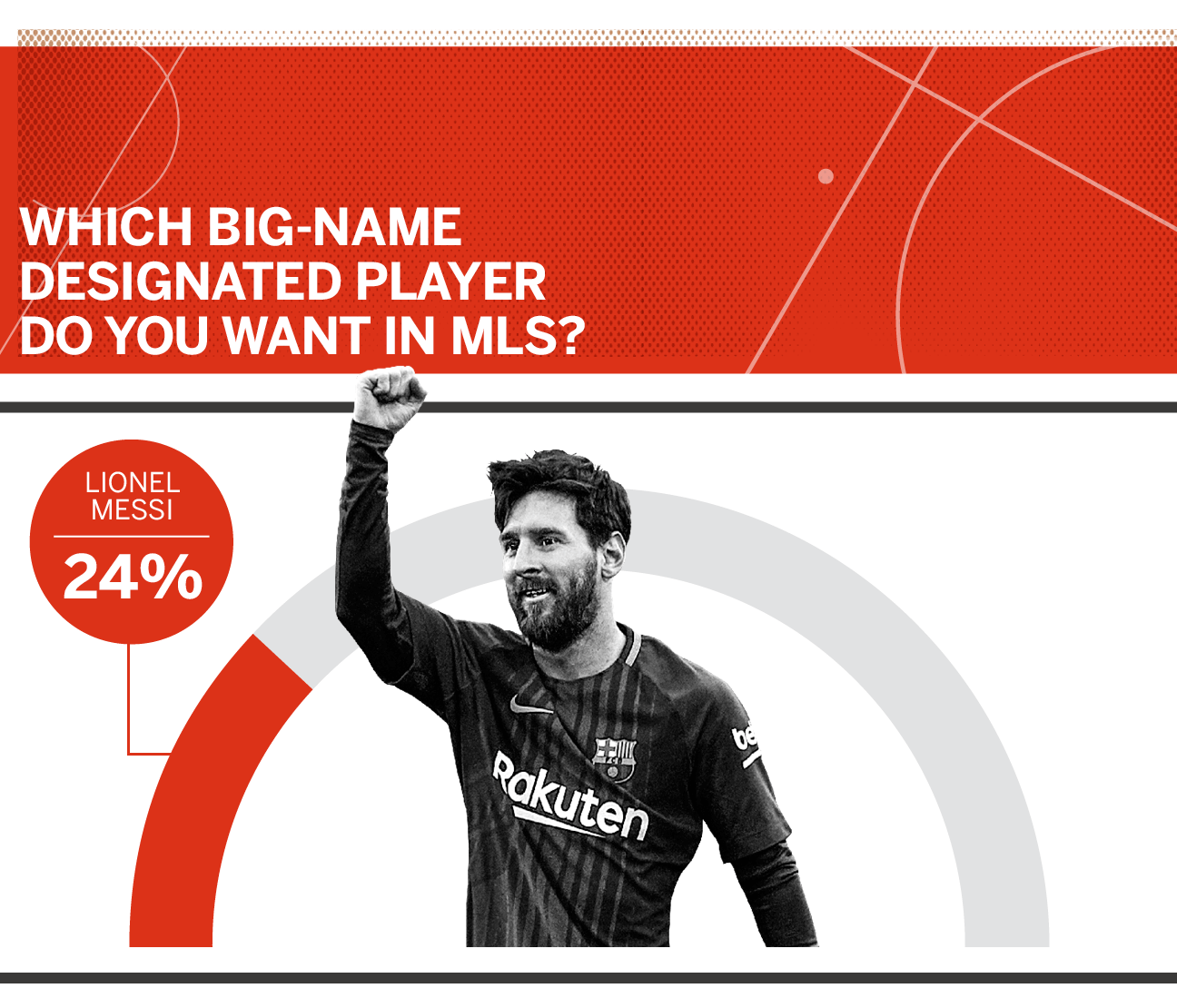 "Ibrahimovic would provide intensity and spark interest in terms of marketing. He would probably play more like [Didier] Drogba: dominate some games, sit others out."

"[Messi] because he's the GOAT. It would be a once-in-a-lifetime opportunity."

"He would bring some branding to the league, would make more people watch the league."

Do you care who the USSF president is?

"It makes a huge impact on how we can grow as a nation and how to not make the same mistakes we have in the past."

"Over time, the whole struggle with World Cup qualifying and players they've picked, the coach we had with Jurgen [Klinsmann], it almost made me more distant from U.S. Soccer. I lost a little faith in the USSF."