Ed Woodward never recovered from the summer of 2013. Thrown in at the deep end when legendary manager Sir Alex Ferguson and CEO David Gill left Manchester United within months of each other, he wanted to make a splash. Instead, it was a flop.

The transfer window, his first as CEO (although he retained the title of executive vice-chairman) and David Moyes' first as manager, began with Woodward frantically departing the club's preseason tour of Australia to tend to "urgent transfer business" amid talk of statement swoops for Real Madrid's Cristiano Ronaldo and Gareth Bale, or Barcelona's Cesc Fabregas. It ended with desperate late-night phone calls to Everton and paying over the odds (a reported £27.5 million) for their Belgian midfielder, Marouane Fellaini.

Moyes played his part, given his known reluctance to move quickly in the market, but the affair allowed Woodward to be painted as a novice who was out of his depth. It was a reputation held by many United supporters that he was never able to shake.

On Tuesday evening as the proposed European Super League (ESL) came crashing down around its 12 founding members, United announced Woodward will leave his post. The club have been keen to stress it was a planned departure, with the announcement not linked to the failed ESL and brought forward only because of the fear the news would eventually leak out. However, those close to Woodward dispute the claim and insist the fallout from the doomed venture was one thing the 49-year-old realised he could not come back from. Privately, he has admitted that while he knew there would be criticism from UEFA and the Premier League, he misjudged the level of anger the ESL stirred up in supporters.

With Woodward at the helm, United won three trophies (none since 2017) and notched four Champions League qualifications, but eight years in the top job at Old Trafford has taken its toll. After an underwhelming summer transfer window in 2018, a group of fans paid for a plane to fly over the Turf Moor stadium before a match with Burnley carrying a banner which read: "Ed Woodward: A specialist in failure." 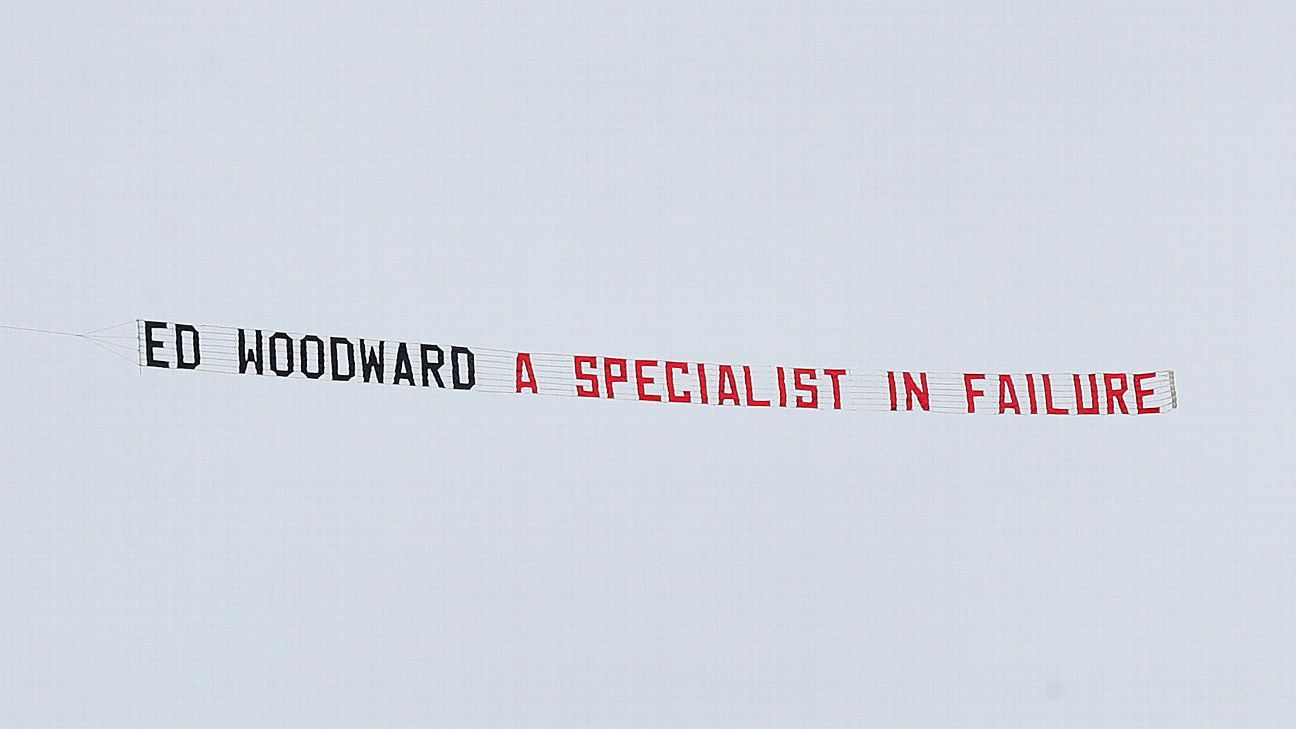 It did not help that in May of the same year, Woodward had told a conference call with investors that "playing performance doesn't really have a meaningful impact on what we can do on the commercial side of the business." For many fans, it was a quote that summed up how they felt the club was being run: as a business designed to make money rather than a football club built to win trophies.

In January 2020, police were called when Woodward's home was attacked with fireworks. Woodward, his wife and two young daughters were not present, but the episode is said to have planted the first seeds of doubt about whether he could continue at the club. He moved to London shortly afterwards and his security at Old Trafford was beefed up over fears he could be egged by supporters.

Woodward accepts he has made mistakes during his time at Old Trafford. He regrets parachuting Moyes into a structure Ferguson built for himself, and realised too late that there should have been appointments made to lead different departments while leaving the new manager to concentrate on the first team. He has since admitted to Moyes it was "unfair."

In February 2014, with United 2-0 down to Olympiakos in the first leg of their Champions League last-16 clash, Woodward took a picture of the scoreboard on his phone and, for a time, used it as his screensaver to act as a reminder that United should never be in that position again. By April, Moyes was gone -- the first manager to be sacked by United in 27 years -- but Louis van Gaal's reign was even more damaging.

Woodward insists he tried to grant every one of the Dutchman's requests because he was so desperate to see United win, but accepts now he was wrong to do so. He found himself regularly called to the Carrington training ground to discuss installing Desso pitches [made from hybrid grass], changes to the way the canteen was laid out and planting more trees because Van Gaal believed the pitch was too windy. Woodward also admits that Van Gaal was given too much freedom in the transfer market and the changes that have been made to the way United recruit players over the last five years have been in direct response to signings like Morgan Schneiderlin, Daley Blind and Bastian Schweinsteiger.

After bending over backwards to appease Van Gaal, Woodward took a much firmer stance with Jose Mourinho and friction between the pair, particularly during the summer of 2018, was partly responsible for Mourinho's dismissal in December that year.

Told in 2018 he could raise more funds by letting players depart, Mourinho was keen to move Anthony Martial on to Tottenham. Woodward refused, and Mourinho remains convinced it was because the French forward is owner Joel Glazer's favourite player. Woodward even had to field questions from his mum about why Mourinho always looked so unhappy.

Woodward's inner circle insist he only ever wanted United to be one of European football's major players and take on heavyweights like Real Madrid and Barcelona. He got so sick of Real Madrid trying to unsettle goalkeeper David de Gea during their pursuit of the goalkeeper in 2015 that local paper The Manchester Evening News was contacted in an effort to bite back.

When Paul Pogba was signed from Juventus for a world record fee of £89.3m in 2016, Woodward was delighted, not only because he had been able to prove United's ambition in the transfer market, but also because they had seen off a late approach from the Spanish giants.

What happens now is not set in stone. United's official stance is that Woodward will leave at the end of year -- despite a personal plea from Joel Glazer to stay -- but he could yet depart in the summer. The club are not ruling out appointing an outside candidate like Edwin van der Sar, who holds the same job at Ajax and played as a goalkeeper for the club from 2005-11, but an internal promotion remains more likely. Richard Arnold, group managing director and Woodward's No. 2, is the obvious choice, although he will take some convincing after having a front row seat to the mountain of criticism Woodward has faced since taking over.

Whenever he was asked about whether it got to him, Woodward would say it was better him than someone else. But agreeing to be part of the Super League, even for 48 hours, proved one mistake too many and the fury that followed sealed his fate.