In this edition, Liverpool fans need a reality check over Bayern Munich's Thiago Alcantara. Plus: Chelsea continue to make moves in the transfer market.

Jump to: Chelsea track Monaco teen | Mourinho keen on Zouma | Inside the MLS is Back bubble | Tierney too tough for Arsenal | Saliba saga continues

Liverpool will not pursue a move for Bayern Munich midfielder Thiago Alcantara, sources have told ESPN, with the Premier League champions only likely to enter the transfer market if a significant member of Jurgen Klopp's squad leaves Anfield. 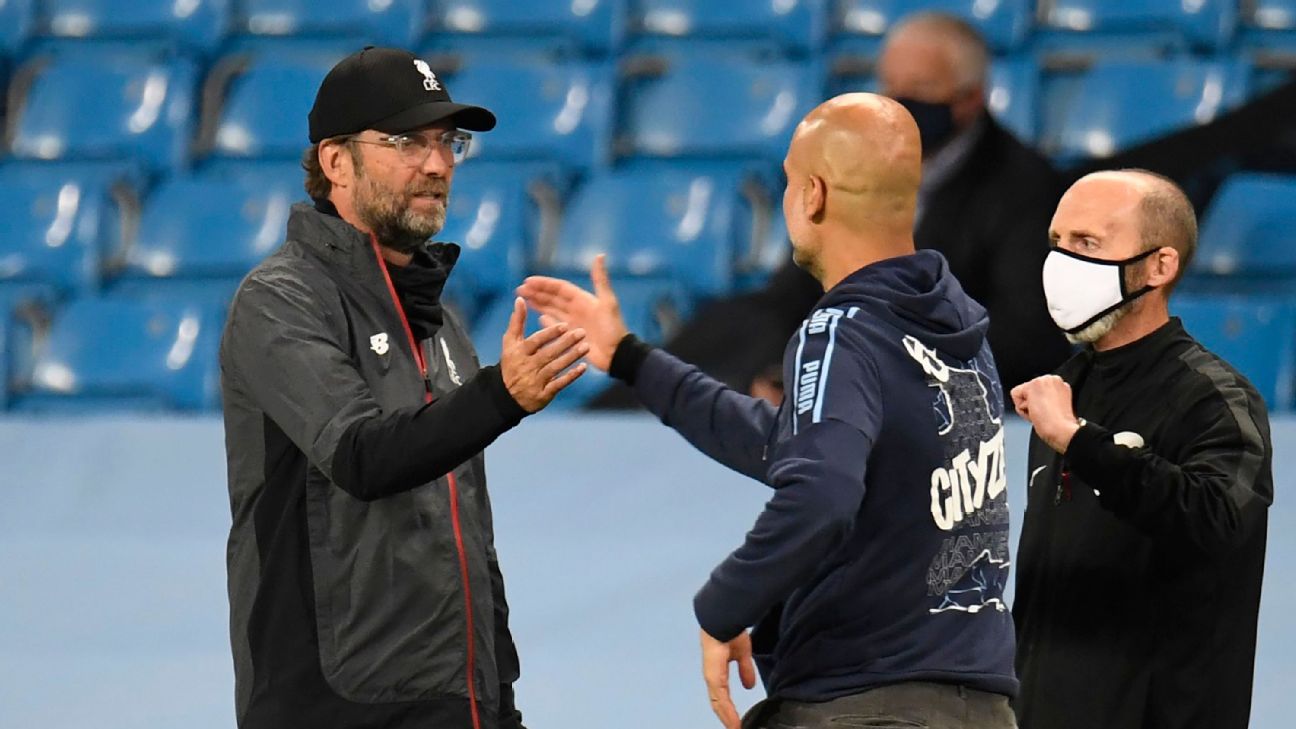 • Liverpool drank a lot of beers - Guardiola
• Messi ready to leave Barcelona - report
• Pulisic game on another level - Lampard
• Mourinho disturbed, destroyed by Spurs loss
• FC Dallas out of MLS is Back through COVID

Klopp admitted last month that Liverpool pulled out of a move for RB Leipzig forward Timo Werner because of the cost of signing the Germany international, who has since completed a €53 million (£47.7m / $59.6m) switch to Chelsea.

And although the club have only made one addition to their first-team squad since the summer of 2018, paying £7.25m for RB Salzburg's Takumi Minamino in January, sources have told ESPN that there is no expectation within Anfield of high-profile arrivals at the end of the season.

Thiago continues to be linked with Liverpool and, should a key player leave, Liverpool would reinvest any transfer fee in order to sign a replacement. Klopp and the club's transfer committee, led by sporting director Michael Edwards, are confident the title-winning squad will remain intact.

Sources have said the former Barcelona star's age -- 29 -- and Bayern's £30m valuation of a player whose contract expires next summer make him incompatible with the club's profile of signings who provide long-term value for money.

Chelsea are trying to take Malamine Efekele from Monaco, the Paris-born 15-year-old forward who is already being likened to Kylian Mbappe by those who have watched the youngster play.

Aside from Efekele's exceptional talent, he shares a few more similarities with Paris Saint-Germain star Mbappe. Both are from Bondy, just north of the French capital where Kylian had his father, Wilfried Mbappe, as a coach at his local club. Both also went to the prestigious Clairefontaine academy before choosing Monaco as their first professional club.

Many top sides across Europe want Efekele but Chelsea are pushing the hardest to sign him. The teenager, who turns 16 on July 19, is tempted by the Blues' interest too.

Monaco are trying hard to convince him to stay. A year ago, Manchester United convinced another jewel of the Monaco academy, Hannibal Mejbri, to join them. And the Ligue 1 side are eager to resist the latest attempt from England to poach one of their top talents. -- Julien Laurens

Kurt Zouma's last-minute tackle on Christian Benteke in Chelsea's 3-2 win at Crystal Palace on Tuesday may have kept their Champions League bid on track, but he is still likely to leave the club this summer, sources have told ESPN.

Tottenham boss Jose Mourinho, who signed Zouma while Chelsea manager in 2014, is still a fan of the 25-year-old and has been in contact, sources have told ESPN. Mourinho has yet to settle on a centre-back pairing at Tottenham and the club have kept just six Premier League clean sheets all season, with the Spurs boss eager to sort out his defence this summer.

Sources have told ESPN that Zouma's representatives have already put plans in place for a move this summer, with Zouma facing competition at Chelsea from Andreas Christensen, Antonio Rudiger and Fikayo Tomori. Chelsea boss Frank Lampard is also on the lookout for a new centre-back himself, which would further reduce Zouma's prospects at Stamford Bridge.

Zouma has three years left on his Chelsea contract after he agreed to a six-year deal in 2017 and would be available for around £30m. In addition to Chelsea, Everton are also keen and clubs in Spain have also registered an interest in him. -- Julien Laurens

Inside the MLS is Back bubble

"Eight minutes and 46 seconds is a long time, right?" affirmed one of the 100 Black MLS players as he exited the field after Wednesday night's Black Lives Matter demonstration.

The reference to George Floyd and emotional power of the protest just before the MLS is Back Tournament kicked off on Wednesday evening with Orlando City vs. Inter Miami won't soon be forgotten by anyone who was there. There were a few tears shed and a nervous energy as the Black players prepared on an adjacent field for a protest that would go on to make world headlines.

That momentum continued with the Philadelphia Union's protest on Thursday morning; the players replaced their names on the back of their shirts with the names of victims of police brutality for their game against NYCFC.

Add in Thierry Henry's protest on Thursday evening, the exclusion of FC Dallas and Nashville from the tournament due to positive COVID-19 cases and the nervous tension that it all created and saying this week inside ESPN's Wide World of Sports Complex has been hectic is an understatement.

Slowly but surely, the players inside the bubble are adapting to a situation they never thought they'd be in and the atmosphere has relaxed. As unfortunate and sad as the FC Dallas and Nashville exclusions -- due to positive coronavirus tests -- from the tournament have been, concerns among the remaining teams have diminished and there is more confidence the show is now on the right track.

Teams have set aside three rooms on their floor for recreational activities as a kind of lounge space to chill out in. The first was a dedicated video-gaming room -- FIFA and Call of Duty tournaments are the most popular -- decked out with video-gaming chairs; next is a poker room and board-game room next door and then the pingpong and darts room follow it.

The Earthquakes' darts games have been particularly rowdy.

"We try to act like the fans at those European dart championships," laughed one player. "I hope we don't get any noise complaints."

There's a sense inside the bubble the tournament has clicked into gear as the matches start to roll by. The majority of players are focused on getting as much as they can out of a situation that isn't ideal, but was never going to be. -- Tom Marshall and Stefano Fusaro

Tierney was too tough for Arsenal

Mikel Arteta's determination to change the mindset of his Arsenal squad and develop a winning mentality is perhaps best summed up by Kieran Tierney's emergence as a key figure at the club.

The Scotland left-back, who arrived at the Emirates in a £25m transfer from Celtic last August, has started five of Arsenal's six Premier League games since the restart. He struggled to make an impression under former manager Unai Emery due to early fitness issues at the club.

Sources have told ESPN, however, that Tierney also caused some awkward moments in his early months at the club with his commitment in training, which did not go down well with some of his teammates.

Having been schooled to "train as you play" by Scottish Premiership giants Celtic, Tierney was urged to tone it down by teammates at Arsenal who had grown accustomed to less forceful workouts under Emery and his predecessor, Arsene Wenger.

All that has changed under Arteta, however, with sources telling ESPN that Tierney's aggressive approach has been received favourably by the new manager. -- Mark Ogden

After big tensions last week, with both clubs criticising each other over Saliba's availability as he nears a 17th appearance, which would trigger an extra payment, they are talking again despite Saliba's loan at Saint-Etienne expiring. Arsenal signed Saliba from Saint-Etienne in a £27m deal last summer before loaning him back to the Ligue 1 club on an agreement that expired June 23.

The two clubs had been in talks over an extension until after Les Verts face Paris Saint-Germain in France's domestic showpiece on July 24. Arsenal coach Mikel Arteta recognises that it would be valuable experience for Saliba, 19, to play in a cup final. However, the Gunners want Saint-Etienne to waive the €2.5m bonus agreed in the previous loan deal in case Saliba started 17 matches in all competitions this season, as reported by ESPN.

Saliba is on 16 appearances for the season at Saint-Etienne but is back training with Arsenal at the moment. However, after a breakthrough in negotiations, he is in line to play for Claude Puel's side against PSG in a little over two weeks' time, with Saint-Etienne expected to agree to Arsenal's conditions. -- Julien Laurens