The Champions League as you know it will be no more -- ESPN's Insider Notebook has the latest. PLUS: Pogba fears a backlash from Manchester United fans.

The Champions League knockout rounds are set for seismic changes that will completely overhaul the competition, sources told ESPN.

The changes mirror the format of Grand Slam tennis tournaments and would be introduced from the 2024-25 season. Country protection is to be scrapped after the group stage, meaning Barcelona and Real Madrid, or Liverpool and Manchester City, would be able to face each other in the early knockout rounds.

- Champions League changes: What we know so far

ESPN sources have revealed that all 24 clubs who progress into the knockout stages of the competition will have their route right through to the final seeded and pre-drawn, based largely upon their group ranking, just like for tennis stars such as Roger Federer and Novak Djokovic in tournaments such as Wimbledon.

The top two teams in the group stage would not be able to meet each other in the knockout rounds until the final, as they will be on opposite sides of the draw.

It's all part of a revamp which comes in from the 2024-25 season, expanded from 32 to 36 teams as one "Swiss-style" league table rather than groups of four teams. Sources have told ESPN that UEFA has yet to ratify this new format for the knockout rounds, but this tennis-style format is favoured.

In a major departure from the existing system, sources told ESPN the plan features:

- A final, 36-team group-stage table, that ranks teams from 1-24 based on how well they performed

- The knockout bracket will be split in two. The best performing clubs in the group stage, ranked 1 and 2, will be drawn into positions at the opposite end of the bracket, thus unable to meet each other until the final 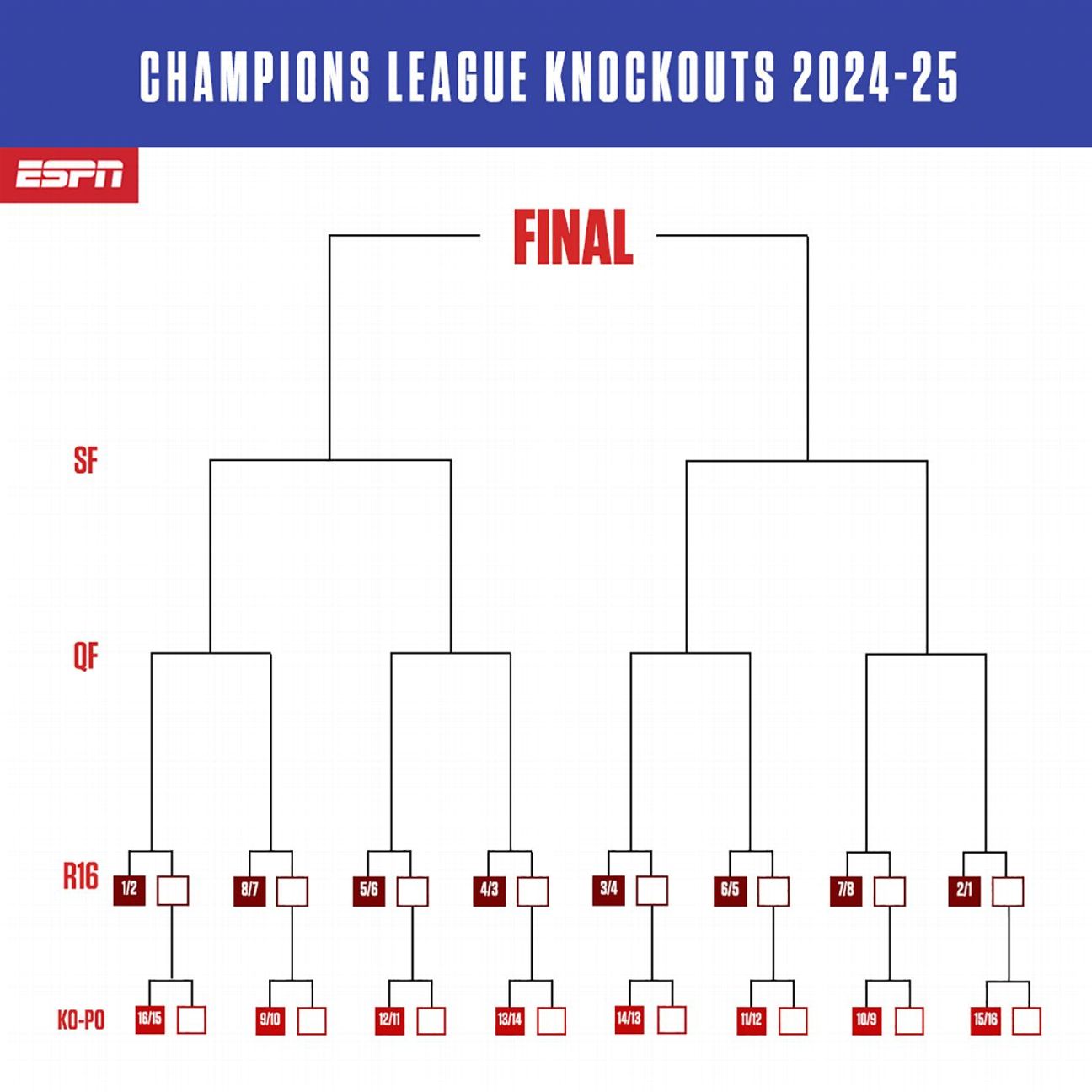 An illustration of how the knockout system will work. ESPN images.

A decision has yet to be made about the exact format of the knockout-playoff-round draw, though those clubs ranked 9 & 10, 11 & 12, 13 & 14 and 15 & 16 would be paired and drawn into set places in opposite halves of the bracket. The eight teams that lose in the knockout playoff round will be eliminated from Europe altogether, with no drop down into the Europa League round of 16.

What isn't certain is how those ranked 17 to 24 would be drawn. One option is to pair these clubs too, which would mean ranks 9 and 10 would play rank 23 or 24, but UEFA could yet opt for an open draw at this stage.

UEFA does need to find a backup solution in case of a deadlock situation when a political clash is prohibited -- for instance, if Russian clubs are readmitted and in a path that leads to them facing a team from Ukraine. Russian clubs are currently banned from European competition following Russia's invasion of Ukraine.

The calendar will also be revamped, with the Champions League group stage played across eight of the 10 midweeks reserved for European football. The Europa League (September) and Europa Conference League (December) will each have one standalone set of games in the two spare midweeks.

Sources told ESPN that both the Champions League and Europa League group stages will complete a month later at the end of January, while the Europa Conference League, which has two fewer group-stage fixtures, will still end in December. -- Dale Johnson

Janusz Michallik speaks about Man United's 4-0 loss to Brighton in the Premier League.

Paul Pogba has reservations about playing for Manchester United at Crystal Palace on Sunday over fears he could be targeted by visiting supporters, sources told ESPN.

The France midfielder was booed by fans following the 3-2 win over Norwich at Old Trafford on April 16 and again when he was substituted because of injury after 10 minutes of the 4-0 defeat at Liverpool on April 19.

- Pogba's United career: Flop or not?

Pogba has not featured since the loss at Anfield but has an outside chance of being available for the trip to Crystal Palace on Sunday -- United's last game of the season.

It's also likely to be the last game of Pogba's United career, with his contract set to expire in June, but sources told ESPN that the 29-year-old is concerned he may get a negative reception at Selhurst Park if he was to be part of the squad.

Sources close to Pogba insist he is yet to make a decision on his long-term future. Paris Saint-Germain and Juventus are leading the race to sign the World Cup winner on a free transfer in the summer.

Pogba has made 226 appearances since rejoining United from Juventus for a then world record £89.3m fee in 2016 but it set to walk away for free for a second time after initially making the switch from Old Trafford to Juventus in 2012. -- Rob Dawson

Why Pogba could be a 'tremendous option' for Juventus

Gab and Juls debate whether a return to Juventus would suit Paul Pogba when he leaves Man United.

Alex Oxlade-Chamberlain is facing a battle to relaunch his career this summer amid concerns Liverpool's transfer strategy could force him to see out the final year of his contract at Anfield, sources told ESPN.

Oxlade-Chamberlain, 28, has not appeared in Jurgen Klopp's Premier League team since playing 62 minutes of the 3-1 win at home to Norwich in February and the former England midfielder was an unused substitute as a depleted Liverpool side won 2-1 at Southampton on Tuesday.

Despite being fit and available, the former Arsenal player's only first-team appearances during the past three months have been FA Cup outings against Norwich and Nottingham Forest.

But while Liverpool are prepared to listen to offers for Oxlade-Chamberlain this summer, sources told ESPN the club will assess how much interest there is in him before setting a valuation on a player signed for £35 million from Arsenal in 2017.

Since recovering from a knee problem in December 2020, Oxlade-Chamberlain has been injury-free, but his first-team opportunities have diminished to the extent he is prepared to seek a move elsewhere to avoid another season of limited chances at Anfield next year.

Liverpool's recent transfer business has seen them hold out for high fees for players entering the final year of their contracts, however, with the club prepared to allow the likes of Georginio Wijnaldum (Paris Saint-Germain), Adam Lallana (Brighton) and Daniel Sturridge (Trabzonspor) leave as free agents rather than be offloaded for lower valuations.

And with the transfer market still impacted by the financial problems caused by the COVID-19 pandemic, Liverpool's prospects of raising funds by parting with Oxlade-Chamberlain are in the balance because of their likely demands. -- Mark Ogden

Burley: Liverpool are brilliant to take the title race to the final day

Craig Burley lays out why Liverpool's Premier League performance this season is so impressive.

Having completed their takeover of Newcastle last October by buying out previous owner Mike Ashley, the Saudi Arabia-backed consortium which now controls the club invested over £90 million in new signings during the January transfer window, including England defender Kieran Trippier and Brazil midfielder Bruno Guimaraes.

But while sources said that head coach Eddie Howe will be backed in the transfer window with substantial funds this summer, agents and clubs have been made aware that Newcastle's new owners will not pay excessive fees or wages in order to bolster their squad.

Newcastle failed in a January attempt to take Lingard on loan for the second half of the season, with Manchester United's owners, the Glazer family, only prepared to offload the 29-year-old in a permanent transfer with a fee attached. But while Lingard will be available on a free transfer when his Old Trafford contract expires at the end of June, sources said that Newcastle's owners will not sanction a substantial signing-on fee or excessive wages to land the England international.

Newcastle's stance on Lingard has reverberated around the game, with sources telling ESPN a number of clubs and agents are waiting to see how Newcastle progress in the early weeks of the transfer window before attempting to do business with the club. -- Mark Ogden

UEFA are considering alternative venues for the 2023 Super Cup, sources told ESPN, with Kazan, Russia, still scheduled to host the fixture, having been awarded hosting rights in 2020.

All Russian teams have been suspended from UEFA competitions since Russia's invasion of Ukraine in February and the European governing body announced earlier this month that the ban would be extended for the entirety of the 2022-23 season, ensuring that no Russian sides would participate in the UEFA Champions League, Europa League or Conference League next season.

The Ak Bars Arena in Kazan, which hosted six games at the 2018 World Cup, had been due to be the first Russian stadium to stage the UEFA Super Cup -- the annual season curtain-raiser between the winners of the Champions League and Europa League -- after being selected as host venue.

But with UEFA stripping Saint Petersburg's Gazprom Arena of hosting rights to this season's Champions League final -- it will now be staged in Paris at the Stade de France -- sources have said that Kazan is facing the same fate. The 2022 Super Cup will be staged at the Olympic Stadium in Helsinki, Finland, on Aug. 10, with the Europa League winners awaiting the victors of next week's Champions League final between Real Madrid and Liverpool. -- Mark Ogden

The 25-year-old has been one of the revelations of the season in France and Napoli could also re-enter the running to sign him after having a bid knocked back in January for him.

Strasbourg, fifth in Ligue 1, may find it difficult to keep hold of Nyamsi this summer amid mounting interest, even though the player's contract still has three years to run.

Nyamsi cost Strasbourg €1.4m when he signed for them from Rennes last summer and sources said a fee of around €20-30m has been mooted for the defender, which would represent a major profit. He featured 34 times for Rennes after making his debut back in October 2017 aged 20, and sources said he did not feel he got a chance to prove himself there.

But West Ham, Leicester and Newcastle have all taken notice of Nyamsi this season, where he has thrived under the leadership of manager Julien Stephan. Nyamsi is among Ligue 1's best defenders in terms of duels won, interceptions made and tackles won, while he has also improved his positioning. -- Julien Laurens