The tattoo on Josh Sargent's leg tells the story of the journey he has been on the past 12 months.

When he got the tattoo a year ago, he had just finished his debut season in the Bundesliga, where he had marked his debut by scoring with his first touch. He had left home, established himself in a new country and was enjoying a burgeoning reputation.

But he was a surprise omission from not one, but two U.S. tournament squads. He channelled his frustration into performing for his club side Werder Bremen, only to pick up a hamstring injury in December. He lost his place at centre-forward to Davie Selke and was shifted out to the wing to accommodate him. And then, just as Sargent started to string together some form, the Bundesliga was halted in march due to the global spread of the coronavirus.

It felt like a continual loop of one step forward, two back; his mental threshold was tested. That's where the tattoo comes in.

"It says, 'Life begins at the end of your comfort zone,'" Sargent, 20, tells ESPN. "And that's something actually my dad and I talked about before I came over [to Germany]. He said, 'This might be a super hard thing to do but, in the end, it's going to make you grow as a person and it's going to be such a big experience for you, and you're young right now. If you hate it, you can always come back to America.'"

"Everything's going crazy," Sargent says. He's picking through this season's highlights via Zoom from one of the TV studios in Werder Bremen's home ground, the Weserstadion. The players are back training in small groups of four, with no body contact due to social distancing rules. Sargent spent his time in lockdown learning the piano and playing Call of Duty: Warzone.

"If you want to be good at Call of Duty, team up with me," he says, laughing in a slightly menacing, but completely serious, tone. He doesn't play FIFA -- it's too close to his day job. He told EA Sports to keep the large card given to players in the game when it was released in September. "I don't need it," he says, remembering how his stats were low the first time he saw himself on the virtual pitch. "It's fine -- I was a beginner then."

Before he landed in Europe as a "beginner," he was part of the U.S. Soccer residency program in Bradenton, Florida, which helped bring through the likes of Landon Donovan and DaMarcus Beasley. The residency program closed in 2017. Sargent caught the eye -- this tall, red-haired, athletic striker. He was also a basketball player in his teens, but with soccer ingrained in his family's DNA -- his father, mother and two sisters play or played the sport -- he was always going to pick a game using his feet rather than his hands.

Those early days in Europe were tough. He had a trial with Dutch side PSV Eindhoven in October 2016. He remembers staying wide awake on the flight over, then heading straight into training and doing rondos. "I was in the middle doing the doggies, and anytime I was on the outside [of the circle], the ball bounced off my foot [and shot off in the wrong direction]." He slept, picked himself up and then went again, learning all the while. He also spent time at Schalke 04 in January 2017 before signing for Werder Bremen nine months later, in September 2017. He made his debut the following December from the bench against Fortuna Dusseldorf and scored with his first touch.

"I was very shy when I first joined and you know, a little bit, 'Can I take that? Can I do this for you?' But I've learned you can't really be like that over here," Sargent says. "You definitely have to be yourself and also show them you're not just somebody they can push around, you know? In my first few training sessions, I wasn't very confident in myself. Guys yelling at me for messing up got to me, but ... you gotta keep trying to push and even if you mess up, just keep going. And if you keep doing it, eventually you'll get it and get a good rhythm."

As we talk now, you can easily forget amid the introspection that Sargent is only in his second season in the Bundesliga.

It's been a whirlwind nine months for him. The turbulence started last June, when he was the high-profile omission from the USMNT squad. He was young enough to feature in the Under-20 World Cup but was left out with the expectation that he would be part of the roster for the Gold Cup. U.S. coach Gregg Berhalter said Sargent would have been the 24th man had they had one more spot in the 23-man squad.

"I was obviously very upset because I for sure thought I was ... not 100 percent, but I had the feeling that I would be going to the Gold Cup," Sargent says. "I had a talk with Berhalter and also my coach here (Werder Bremen's Florian Kohfeldt) and it was a time to just completely forget about football for a little bit, relax, reset my mind." He opted to stay in Germany through the offseason rather than returning home. "It was good for me to come into preseason with Bremen and I was very focused and hungry to prove myself."

He started the season in a staccato flow of mixing starts with substitute appearances, but then in December came the hamstring injury that ruled him out for a month.

"I felt I was getting in pretty good rhythm before the injury," Sargent says. "I was playing in few games, but right when another player got back from injury, the trainer played him over me, which was a little unfortunate. But you know, it didn't really change my mindset. I still was working hard every day."

He scored in a 2-2 draw with Hertha Berlin before the Bundesliga was halted. Kohfeldt praised Sargent's goal but also offered constructive feedback. "He has to learn that he focuses on completing the little things," Kohfeldt said. That one match perfectly illustrated this season's frustrations.

"I mean, there's definitely times where it's like, 'Josh, you're still 20 years old. You have your whole career ahead of you. This is only your second season. It's only the beginning,'" he tells himself. "And I know it'll get better from here, for sure."

Werder Bremen are 17th out of 18 teams in the Bundesliga. There are 10 games left, if the season ever resumes. They are eight points adrift of guaranteed safety.

"I mean, being a young player going through everything the club is going through this season, obviously the club's near the bottom of the standings right now," Sargent says. "It's just, you know, taking everything in and trying to learn from everything. Ten seasons from now, it'll for sure be a very valuable experience."

"I've deleted Twitter off of my phone now," Sargent says. "I still have the account, but I'm not on that as much. Instagram, I still have it on my phone, but I try not to get on it or if people tag me I don't look at it really. I try to stay away from all that stuff. 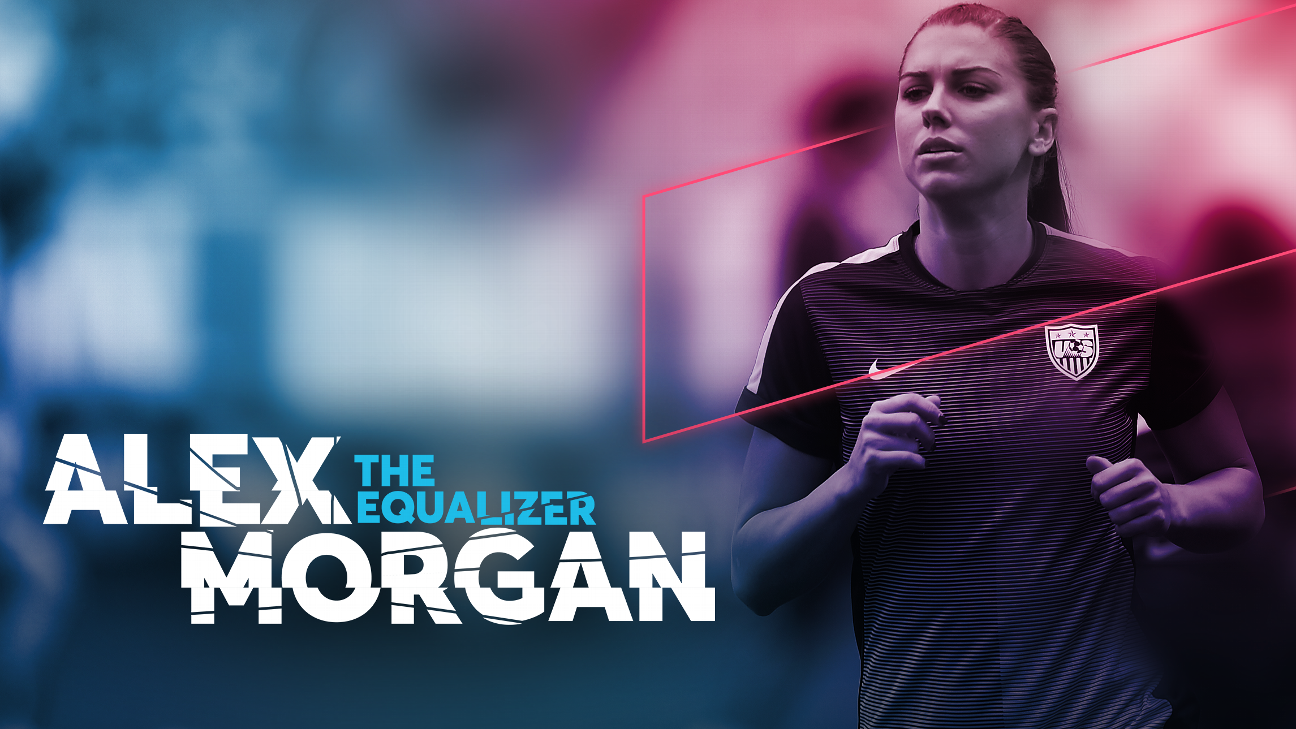 A behind-the-scenes look at Alex Morgan and her USWNT teammates, who are paving the way for the generations who will follow their lead. Stream on ESPN+ (U.S. only).

"It's fun to get on to see your old friends and to talk to people, see some funny videos and everything. But, you know, sometimes it just gets too much. And some people kind of ruin it when they're sending you mean things and trying to talk trash. I try to stay away from it as much as possible."

The conversation returns to the present. He's fit, he's ready to fire and wants to help Werder Bremen out of their predicament if and when football returns.

He is learning all the time. "I'm currently reading 'Can't Hurt Me: Master Your Mind and Defy the Odds,' by David Goggins. It's a self-motivation book. I started it this season and it relates to a lot of stuff going on."

You sense Sargent is a little tired of others talking on his behalf; he wants to be the one putting the full stop on this season, if it finishes. "We have to deal with whatever comes at us, and fight to the end," he says.

Sargent will do that. He's out of his comfort zone, but just at the start of his journey.