WASHINGTON  As Mike Tyson sat on his stool, quitting after six rounds against Kevin McBride, he had a look of resignation and relief on his face.

At last, he realized, his tumultuous career was finally over.

"I didn't feel bad or nothing at all, just that what's over is over," Tyson said during an introspective half-hour interview with ESPN.com following Saturday night's post-fight news conference.

Tyson was mellow, witty, sad, philosophical and happy at different times. But the one thing that came across was plain and simple: Thank goodness it's over.

"There comes a time in your life where you really don't care about this business no more and it's time for the younger guys to do it. 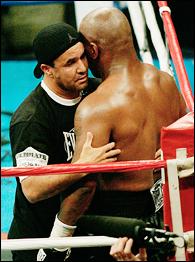 Tyson was too sore to even move, he said.

"Everything he hit me with hurt. That's what happens when you get in that state," Tyson said. "Everything hurts. I used to get hit by Razor Ruddock, and nothing. Now, damn, everything hurts. He hurt me. I'm just gonna soak my body later. I'm in pain. I don't want to move now because I'm so damn sore."

The 6-foot-6, 271-pound McBride towered over the 5-11, 233-pound Tyson and used that to his advantage, leaning on Tyson to tire him out while still landing shots that clearly hurt Tyson.

Tyson, who hadn't fought since last July, when he was knocked out by Danny Williams in an upset, was trying to make a comeback from that loss and the torn knee he suffered in the fight. A couple of wins probably would have paved the way for Tyson to receive another title shot because the division lacks for star power.

Tyson, years past his prime, remains the biggest attraction in the division, and 15,472 jammed the MCI Center to pay homage to him. But what they saw was a shell of the man who, at 20, became the youngest heavyweight champion in history in 1986, and wreaked havoc on the division while defending the title nine times.

"When I'm on top of my game it's really hard for anybody who ever lived to beat me, but the fighting world is not what I love anymore. That's how people define me but I am not that person anymore."

Tyson, 50-6 with 44 KOs and two no-contests, said the last time he had any real desire to fight was in his 1991 rematch with Ruddock. That was Tyson's last fight before he went to prison on a rape conviction.

"Then I came out of jail and I beat guys because they were basically scared," Tyson said. "I scared these guys [Frank Bruno and Bruce Seldon] out of two belts. I don't want to sound obnoxious, but very few fighters  you could probably count them on one hand  had the success in this particular field that I had. No one has had the international impact. I don't want to say I am the biggest fighter in the world, but I'm pretty close. I'm pretty close."

Legions of fans have continued to believe Tyson could again become champion, but he said it was time for them to be real. He has lost three of his last four fights.

He said the only reason he has continued to fight was because "it was profitable and I was just caught up in the lifestyle. Everybody knew it was over. I'm not lying. You know it. You've been around me. We all know the deal. Don't feel sorry for me. It is what it is."

Tyson had two points deducted by referee Joe Cortez in the sixth round for head butting McBride, 32, of Ireland. Tyson, who has a lengthy history of dirty fighting tactics  who could forget him gnawing on Evander Holyfied's ears?  says he butted McBride on purpose.

"I did because we are fighting. It's just the way it is, man," Tyson said. "No regrets. I'm just glad no one is hurt. That is just the game we live in. We're in the hurt business. It's really not [OK to head butt] but I did it anyway."

As the sixth round ended, Tyson went down on the canvas without being hit by a punch. Cortez ruled it a slip but Tyson stayed down, just leaning against the ropes.

"I was trying, but I was too tired to get up," Tyson said. "I was just tired and didn't want to get up."

He eventually did and slowly made his way back to his corner, where an exhausted Tyson took a seat on the stool. He had a few words with trainer Jeff Fenech, who then stopped the fight.

"Jeff said he was going to stop it. I said he don't have to stop it. I'll deal with it like a man, but he's too sensitive when it comes to me. He's too sensitive," Tyson said of Fenech, a longtime friend and Hall of Famer who was in his first fight as Tyson's official trainer.

"I'm not the kind of guy you feel sorry for, I'm just not that kind of guy," he said. "I don't want people to look up to me. I know who I am. I've done things I am not proud of in my life. I don't want nobody looking up to me. I'm just an isolated guy. People think they know me but they don't know me."

Tyson said he was going to consider doing missionary work and that he would like to spend more time with his children in retirement but that he probably shouldn't because he is a self-described poor father.

Tyson's purse for the fight was $5 million, but he is in bankruptcy after blowing some $300 million in career earnings. Most of the purse will go to his creditors. That was one of the main reasons he continued to fight. 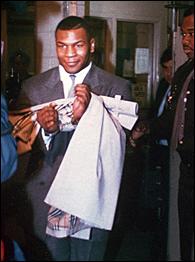 Whatever Tyson does, he said fighting won't be a part of it.

"I'm pretty vain. I like the way my body looks so I want to keep in good shape, but I don't want to fight no more," he said. "I just don't have the desire no more, I don't have the stomach to do it no more. I don't even kill insects in my house. I just don't kill anything no more. I used to kill pigeons, rip their heads off, 'You dirty rat pigeon!' I don't even have the heart to kill an animal no more. I just changed my whole life in general. That probably could have changed the way I fight."

If Tyson stays retired, he will surely be elected to the International Boxing Hall of Fame five years from now and his career will be rehashed yet again. He said he is not interested in such honors.

"I'm not into the boxing world no more. I don't want to be remembered at all," he said. "My heart is not in the fighting game. I don't even like it no more. I hate the smell of the gym. I won't go in the Hall of Fame. I'm just not that guy anymore. The WBC invited me to be one of the 20 greatest fighters of all time, but I'm not going to do that. I hate the boxing game. I'm not interested it in it no more.

"I never appreciated the fame unless I used it to get what I wanted. Great, I never had to wait in line for a restaurant or a club. I never had a problem getting the best girl. I abused it like that. I was pretty selfish with my fans. I never gave them the time the way I should have. I don't think I like the people anymore in the fight game. They look at me as something I no longer am. They're cheering for the wrong guy.

"This is a weird feeling in my life I have to deal with, not being a violent man anymore when my whole life's reputation was built on being extremely violent. I just don't know how to deal with that right now. I don't even go to strip clubs no more. I don't know who I am sometimes, but I am not the guy I used to be. I'm not an angel or anything. I'm still lascivious, periodically. I'm just looking for some balance in my life."