When would Ricky Hatton step up and face a serious opponent? It was a question that dogged him for a few years.

Hatton, the favorite son of Manchester, England, had a huge following in Great Britain and was generating substantial revenue, even against no-hopers. So many believed he would remain safely tucked away against less-than-stellar opponents to ensure that the gravy train would continue rolling along. 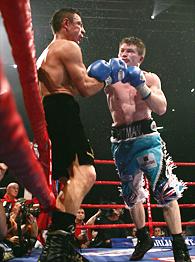 But Hatton, as we found out, was serious about proving his worth, so serious that he won two world title belts by dethroning a legendary champion and then unifying belts against another titlist. For his accomplishments, Hatton is ESPN.com's fighter of the year.

As 2005 opened, Hatton set his attention on the single most dangerous opponent any junior welterweight could find: Kostya Tszyu.

Not only was Tszyu the long-reigning champion and a top-five pound-for-pound entrant, but he is one of the best 140-pounders of all time and destined for the Hall of Fame.

The fight was finally set for June 4 in Manchester -- and would take place at 2 a.m. so it could be seen live on Showtime on the East Coast of the United States. No matter. The joint was jammed with Hatton's loyal supporters and he did not disappoint.

Hatton, who turned 27 in October, proved that he was to be taken seriously by the elite fighters in his loaded division. He was simply too strong and too determined for Tszyu.

It was a rough, physical fight, and although Hatton was up to the task, Tszyu was not. By the 11th round, he was trailing on the scorecards and taking a beating from the aggressive Hatton.

Finally, after the 11th, Tszyu retired on his stool, beaten down by the relentless new champion in a memorable fight.

The months that followed were bumpy for Hatton, who went through a messy split with promoter Frank Warren. Yet Hatton remained focused on his goal to unify the division. To that end, Hatton (40-0, 30 KOs) sought out Carlos Maussa. Hatton had been ringside in Atlantic City, N.J., when Maussa won a title with an impressive upset knockout of Vivian Harris in June.

Hatton said a week after the Tszyu fight during a breakfast with American beat writers that the constant questions about his desire to fight the best had indeed bothered him. He said, however, that they motivated him going into his career-defining bout with Tszyu.

"It was upsetting me," Hatton said. "For ages, I've been saying I want to fight the best in the division and I'm not overhyped or overprotected, shying away from the big names. I didn't need to beat Kostya Tszyu to prove it to myself, but hopefully from your [media] guys' point of view, you'll start believing a little bit more maybe, that I wasn't just saying it. That I did believe it."