AROUND THE RING
Coming this fall: Cotto-Mosley 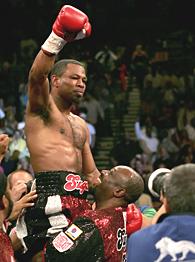 Top Rank's Bob Arum and Golden Boy CEO Richard Schaefer, who settled the numerous legal fights between the companies last month, are in the midst of hammering out a deal that will see Cotto (30-0, 25 KOs), the 26-year-old all-action Puerto Rican star, square off with longtime star Mosley (44-4, 37 KOs), who is 35 but fighting lately like a man 10 years younger.

The target date for the HBO PPV fight is Nov. 10 at New York's Madison Square Garden, where Cotto knocked out Zab Judah in the 11th round June 9 in front of a record crowd of 20,658.
Arum and Schaefer met this week in Los Angeles to iron out their agreement.

"I met with Bob and we spent some time working on it," Schaefer told ESPN.com. "I discussed it with Shane and [wife] Jin and I am waiting to hear back from them. But Bob and I have basically worked out a deal which is now subject to the approval of Shane and Jin.

"We've worked pretty hard on getting it done and I hope it's going to happen. It's one of the best fights in the ring and it's two big names fighting each other. It's like [Golden Boy boss] Oscar [De La Hoya] says -- when you put two great fighters together, there is no loser. The sport of boxing and the fans are the winners."

Arum told ESPN.com: "We're getting very, very close. We're very enthusiastic that we will get it done. I think it will be a sensational fight. Shane is still a great fighter and Shane believes he can win. If you're building a real superstar like we are doing with Miguel, this is the kind of fight he must have like when we [Top Rank] put Oscar in with Ike Quartey and Pernell Whitaker. I think it could be the fight of the year. If Miguel didn't look as good as he did against Judah, we wouldn't consider making this fight. Shane is a hell of a fighter, an experienced guy, he's fast and he takes a great punch. A victory over Shane is not going to be easy."

Mosley's first choice to fight this fall was Floyd Mayweather Jr., but he is negotiating with Ricky Hatton instead, a fight Golden Boy appears likely to wind up promoting because of an option it is said to have on Mayweather following his May 5 victory against De La Hoya.

"Mayweather doesn't seem to want to fight me, so I'd love to fight Cotto," Mosley told ESPN.com. "I think it's an exciting fight. I hope we can get it done. I think the fans will love that one." 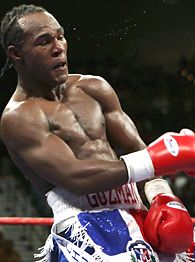 It's a topflight match between two of the best in a loaded division that also includes Juan Manuel Marquez, Pacquiao and Barrera.

Guzman is a former junior featherweight titleholder. Soto is undefeated since 2002, a stretch during which he is 19-0 with a no contest.

Golden Boy is so excited about the matchup that it combined two of its fall "Boxing After Dark" dates into one so HBO could afford the fight, according to Schaefer.

"We needed to have HBO step up a bit and I had to combine a couple of my dates," he said. "I did that because it is an amazing matchup. Oscar is really committed to putting together the biggest and best fights, and this is another example. Instead of having two 'Boxing After Dark' cards with two good fights, we'd rather do one great fight. I don't know who is going to win that fight and that is why fans want to see it."

Arum said he is enjoying doing business with Schaefer now that the legal battles between companies are settled.

"Richard is the easiest guy to do business with of all the promoters because he's a businessman and I'm a businessman," Arum said. "We talk in shorthand and we don't have to go through all the crap you have to do with other promoters."

HBO has agreed to give Golden Boy a second live fight on the broadcast, which will probably involve hot prospect Abner Mares (13-0, 8 KOs), a 2004 Mexican Olympian. Mares, 22, has moved down to bantamweight from junior featherweight and recently hooked up with star trainer Nacho Beristain.

If Berto wins, he's ticketed for an HBO fight Sept. 29 on the undercard of middleweight champ Jermain Taylor's defense against Kelly Pavlik at Boardwalk Hall in Atlantic City, N.J.

"This is a huge fight for Andre," promoter Lou DiBella told ESPN.com. "Everyone in boxing knows Cosme Rivera is a great trial horse for an up-and-coming fighter. He's a rugged, tough fighter and he's the best fighter Berto will have ever fought. And if Berto wins, he'll then go on to fight the best fighter he's ever fought on Sept. 29. We view these two fights as the end of the learning curve. After Sept. 29, if everything has gone well, our attitude is that he's no longer a prospect, but a contender, and bring on the real fights."

• The July 21 Bernard Hopkins-Winky Wright light heavyweight championship fight on HBO PPV generated between 300,000 and 330,000 buys -- roughly $15 million -- Golden Boy CEO Richard Schaefer told ESPN.com. "I would definitely say it was a big success, especially being in the middle of the summer," he said. "It shows that Bernard has become a pay-per-view attraction and that he consistently delivers fights above 300,000 homes. There are very few fighters who can do that." The fight ranks as the year's second-most successful boxing pay-per-view event behind the record-shattering Floyd Mayweather-Oscar De La Hoya bout on May 5.

• Although nobody is talking about it publicly, the sides are very close to a deal to match light heavyweight titlist Chad Dawson with ex-champ Antonio Tarver on Sept. 29 as part of Showtime's free preview weekend. One item that still needs to be worked out is the site. The Tarver camp would rather not go to one of the casinos in Connecticut, Dawson's home state. Tarver wants to fight in his hometown of Tampa, Fla., and one site mentioned was Legends Field, the spring training home of the New York Yankees and home of their Class A Tampa Yankees. If Dawson-Tarver is made, it will knock heads with HBO's much-anticipated Jermain Taylor-Kelly Pavlik middleweight championship fight.

• In addition to the Fernando Vargas-Ricardo Mayorga middleweight main event and welterweight titlist Kermit Cintron facing Jesse Feliciano on the Sept. 8 Showtime PPV card from the Staples Center in Los Angeles, a third TV bout will pit former junior middleweight titlist Roman Karmazin (35-2-1, 22 KOs) against Italy's Luca Messi (30-7-1, 11 KOs). Messi, who signed recently with Don King, was medically suspended in Italy in late 2006 because of an abnormality (not related to boxing) discovered in a blood vessel in his brain during an MRI exam that followed an 11th-round TKO loss to Michele Piccirillo last summer. Because of the Italian suspension, it would be very difficult for Messi to obtain a license in Europe. He did, however, receive a license in Florida. Also slated to be on the King and Main Events co-promoted card are two of Main Events' most promising fighters, junior middleweight Joel "Love Child" Julio and middleweight Giovanni Lorenzo. Their bouts are not slated for the broadcast but we could see highlights.

• Although a news conference in Los Angeles to officially announce the Oct. 6 (HBO PPV) rematch between Manny Pacquiao and Marco Antonio Barrera was postponed because Pacquiao did not fly in from the Philippines because of a scheduling conflict, Top Rank matchmaker Brad Goodman and Golden Boy's Eric Gomez are working on the undercard. Besides the main event, there will be three other televised bouts: one Top Rank fight, one Golden Boy fight and one fight matching a Top Rank boxer against a Golden Boy fighter. Top Rank is considering putting Steven Luevano (33-1, 15 KOs), who won a vacant featherweight belt July 14 in England, on the card in his first defense. Another possible match for the card would pit Top Rank's Giovanni Segura (18-0-1, 14 KOs), a mandatory junior flyweight challenger, against titlist Juan Carlos Reveco (16-0, 7 KOs) of Argentina, who won a vacant belt June 22.

• The deal between HBO and promoters of the Joe Calzaghe-Mikkel Kessler fight sets the date and location for the bout as Nov. 3 in Cardiff, Wales, and the network plans to air the fight live at 5 p.m. ET with a prime-time replay. However, HBO still has the option to change its mind and, for a steeper license fee, push the fight into the Cardiff wee hours in order to air the fight live in a more desirable prime-time slot on the U.S. East Coast.

• In anticipation of next Saturday's junior featherweight world championship rematch between Rafael Marquez and Israel Vazquez, Showtime will replay their all-action first fight from March 3 on Wednesday night (11 ET/PT). After seven rounds of toe-to-toe action, Marquez won the title when Vazquez retired on his stool with a badly broken nose. Showtime will also carry the rematch from Hidalgo, Texas, three days later (9 p.m. ET/PT).

• Kendall Holt (22-1, 12 KOs) has signed his agreement to face junior welterweight titlist Ricardo Torres (31-1, 27 KOs) on Sept. 1 in Torres' hometown of Barranquilla, Colombia, according to manager Henry Cortes. Holt had hoped to face Torres in the Chicago suburb of Rosemont, Ill., on Aug. 4 on the David Diaz-Erik Morales undercard, but Torres' Colombian promoter won a purse bid and has control of the fight. "We would have been happy if it was in Chicago," Cortes told ESPN.com. "We're not too happy it's in Colombia, but Kendall has to take the risk if he wants to be champion. He's going there to win."

• New York junior welterweight Dmitriy Salita (27-0-1, 15 KOs) hopes to land a shot against newly crowned titlist Gavin Rees of Wales. Rees (27-0, 13 KOs) upset Souleymane M'Baye to win a 140-pound belt on July 21 in Cardiff. "Anytime, any place, anywhere," Salita said. "I'd love to fight him for the belt in Madison Square Garden. That would make history. I am, however, willing to fulfill my American dream of becoming a world champion in England. I will make all of my fans proud and my critics eat their words." Salita has also been mentioned as a challenger for titlist Paulie Malignaggi, his friend and fellow New Yorker.

• Everyone is doing it, so Ike Quartey is joining the party. Like Floyd Mayweather Jr., Oscar De La Hoya and Shane Mosley, Quartey said he plans to leave the junior middleweight division and head back to welterweight, where he used to be a champion. Quartey (37-4-1, 31 KOs) lost his last fight in December to Winky Wright at middleweight. "Even though everyone knows that I beat [Vernon] Forrest [at junior middleweight last August], I did have a tough night against Winky," Quartey said. "Neither fight was at the right weight for me. I feel like I can be slicker and move better in the ring at 147. Fighting at welter will allow me to polish my defense and have a much more explosive offense in the ring. I'm joining Mosley and Oscar in moving down and I will be a factor in the welterweight division."

"That was round one. Mayorga is a stupid fighter and I am an intelligent fighter and I'm going to pick my spots. I am going to knock him out. He already felt my power once and it's going to be great to do that at the Staples Center in front of a lot of crazy Mexicans. All of my fans will be going ape."

-- Former two-time junior middleweight titlist Fernando Vargas, speaking at a news conference this week in New York about his July 11 scuffle with Ricardo Mayorga and a prediction for their Sept. 8 Showtime PPV middleweight fight.

"I had a dream last night that I threw a rotten orange at Fernando Vargas and hit him in the chin and he went down, and he didn't get back up. He's ready to go. He's like a rotten piece of fruit."