ROSEMONT, Ill. -- When David Diaz won a Chicago Golden Gloves title as an amateur in 1993, he estimated that there were about 3,000 people watching, and he had a dream -- to someday return home to that same building for a professional world title fight.

Diaz, making the first defense of his lightweight title, did just that, edging Erik Morales on a unanimous decision in an all-action fight before a lively crowd of 9,735 on Saturday night at Allstate Arena.

"It came and I did it," said a joyous Diaz, who was sporting a big shiner under his right eye. "I won in the late rounds like I usually do. I am thrilled to defend my championship in Chicago for the people." 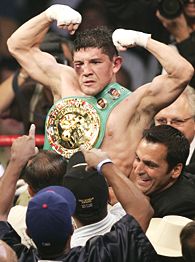 While the victory was Diaz's greatest triumph, it also marked the end for Morales, one of the most exciting and accomplished fighters of his generation.

Morales said in the ring, even before the scores were announced, that he was going to quit. After the loss, he made it official -- at age 30 and a pro for almost half of his life, the Mexican icon announced his retirement.

"That's it," said Morales, who was bothered by a right wrist injury and blisters on his right foot. "No more fighting. I am done. Too many punches, particularly to the head area."

He was bidding to become the first Mexican-born fighter to win a title in four divisions, but Diaz (33-1-1, 17 KOs) had something to say about that, handing Morales his fifth loss in his last six fights.

"Erik has taken too many punches. It has to stop," said Jose Morales, Erik's father and trainer.

Although he tasted defeat again, Morales went out with a vintage display of heart. Some had questioned if he still had a thirst for combat after he sat on the mat and took the full count in the third round after being knocked down by Pacquiao in their November rubber match.

Diaz, 31, won by applying relentless pressure, especially in the second half of the fight.

"It could have gone either way if he beat me the last round," Diaz said. "I always give it my all. I am the second-half guy. I always come on late. Erik Morales is a great champion. Erik fought like a great champion."

They began brawling from the opening bell. Diaz was pressuring Morales in the first round and hurt him with a left hand. But Morales came off the ropes and nailed Diaz on the chin with a right hand, sending him to the canvas.

"It was a nice little flash knockdown," Diaz said. "He caught me, but I wasn't hurt."

In the second round, Diaz appeared to land a left that knocked Morales to the mat, but referee Benji Estevez called it a slip, even though Morales got up slowly.

They continued to trade as Diaz bulled forward looking for openings while Morales, who earned $750,000, tried to counter. By the sixth, Diaz had developed significant swelling under his right eye, but he continued to pressure Morales.

Diaz had his best moments when he could pin Morales against the ropes and pump uppercuts like he did in the seventh.

In the eighth, the brawl intensified. With the crowd going crazy, the fighters traded shots in the middle of the ring and never stopped throwing punches.

The 12th began with the crowd on its feet and the fight seemingly up for grabs. Diaz tried to pound body shots while Morales threw combinations. Diaz landed two powerful right hands with Morales against the ropes, but Morales came back to rock Diaz in a sizzling exchange as the crowd went wild.

Diaz said he knew the fight was close and didn't want to let up in the final round.

"We had a never quit attitude," the 1996 U.S. Olympian said. "I knew that was how I had to fight. That's why I went all out in the 12th round. Strick [trainer Jim Strickland] was telling me, 'You need this, you got to give me the round.'"

Diaz had won the interim belt with a comeback 10th-round knockout of Jose Armando Santa Cruz last August. When recognized world champion Joel Casamayor pursued another fight instead of a mandated bout with Diaz, he was stripped by the WBC and
Diaz was given the title.

Diaz, who earned a career-high $350,000 for the fight, said he knew there were critics of the way he received his title, but he hoped his win over Morales put that to rest.

"Did I earn it today," Diaz asked. "This was my championship fight. A lot of you guys wrote this was given to me. Tonight, I won it. I can call myself a champion, especially after beating a legend."

Juan Diaz and Julio Diaz -- none of them are related -- also hold 135-pound belts and David Diaz said he would like to unify titles.

"I think there are room for about two more [belts]," Diaz said. "I want Diaz and Diaz. If we could unify, that would be awesome. If they want to unify, I will do it."