LAS VEGAS -- Four years ago, Manny Pacquiao steamrolled Marco Antonio Barrera en route to an 11th-round TKO victory. It wasn't nearly as easy this time around, but Pacquiao still got the job done in the rematch.

Landing harder punches and flurrying effectively, Pacquiao controlled the action and won a unanimous decision in their junior lightweight fight Saturday night before an excited crowd of 10,112 at Mandalay Bay. 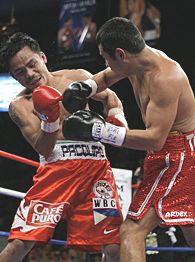 "It was different from our first fight," Pacquiao said. "He's a good, smart boxer. For me, I'm satisfied with that win. I thought the people were happy with that fight. I'm trying to make people happy, to give a good fight. I hope that people liked this fight tonight. We did our best."

It was the second consecutive defeat for Barrera, who lost his title to Juan Manuel Marquez in March. Coming into the rematch with Pacquiao, Barrera said it would be his last "big fight." Afterward, the Mexican legend said it was the last fight in his storied career, period.

"Honestly, this is my last fight," said Barrera, who in an 18-year professional career won world titles at junior featherweight, featherweight and junior lightweight while engaging in many of the era's most exciting fights. "He had very good defense, and it was hard to break through."

After the first loss to Pacquiao, Barrera went on a six-fight winning streak before running into Marquez. And if this is indeed the last we see of Barrera in the ring -- he had mentioned a possible farewell fight in the days before the fight -- he said he can live with the outcome.

"I'm sad because I lost, but he hit me with very few punches, very few combinations. I thought I controlled him with my left hand all night," said Barrera, a lock first-ballot Hall of Famer. "I'm happy we're finishing off the career with that."

After past losses, Barrera had confounded experts regularly by rebounding with an unexpected victory. He couldn't do it Saturday.

At 33 and with many wars behind him, Barrera was just a step slower and a punch late.

"I lost my head in a couple of the rounds," he said. "I think I got too caught up in things. I shouldn't have stayed in those exchanges. I should have just kept boxing him. I thought I boxed him really well."

Barrera, who got cut under the right eye in the round, came back and whacked Pacquiao across the face with a right hand while referee Tony Weeks was breaking them.

Pacquiao, 28, said that just because he had beaten Barrera so easily that November 2003 night in San Antonio didn't mean he was expecting the same kind of fight this time.

"I was careful in this fight. He's still a good fighter," Pacquiao said. "I was just lucky in the first fight that it happened like that."

Freddie Roach, Pacquiao's trainer, said he thought Pacquiao would be able to knock out Barrera, who was never close to going down.

"Barrera surprised me that he lasted as long as he did in the fight," Roach said. "He has a lot of heart and guts, and he fought a great fight. Manny boxed well. He showed good footwork. When he cut him off and moved Barrera to the right, it was beautiful. I give Barrera a lot of credit. I didn't like it when Manny followed Barrera around."

In Manila, President Gloria Macapagal Arroyo led Filipinos
rejoicing Sunday over the latest victory by their boxing hero, who
caused Philippine troops and Muslim rebels to briefly lay down
their arms to support him.

"Filipino boxing great Manny Pacquiao once again buoyed the
nation's spirit with his excellent fighting form and indomitable
spirit," Arroyo said. "Our 'national fist' is the Philippines'
gift to the world of boxing."

Pacquiao's fights are national events in the Philippines, with
athletic clubs and bars and clubs -- and even air force bases --
turning into viewing venues for millions of fans.

HBO will replay the fight Oct. 13 (11 p.m. ET/PT) along with live coverage of the lightweight unification bout between Juan Diaz and Julio Diaz.

Both fighters earned at least $2 million, but only Pacquiao will move on to greater paydays.

The victory also set up a possible rematch with Marquez. In their 2004 fight, Pacquiao knocked Marquez down three times in the first round but Marquez stormed back to gain a draw many believed should have been a win.

That fight, like Pacquiao-Barrera II, is possible thanks to the summer truce between promotional companies Top Rank and Golden Boy, which both claimed Pacquiao's promotional contract.

Dan Rafael is the boxing writer for ESPN.com. The Associated Press contributed to this report.