When did Philly, New York and Brockton give way to Oklahoma? As a supposed East Coast-biased fight fan, did I miss something along the way?

One minute it's all about the top prospects along the Northeast's I-95 corridor, the next thing you know I'm working back-to-back fight nights in Sooner Nation. It seems my ESPN travel department has more ins (and inns) with the state where "Everything is OK" (catchy license plate, huh?) than it does at the Times Square Marriott Marquis.

Hey, when it comes to the health and welfare of boxing, there is no denying that the state that gave us Barry Switzer and Barry Sanders is doing a better job than boxing states that have given us a different kind of B.S. (FYI: Oklahoma does very well at the organic variety of B.S.; just take a drive on I-44, east toward Joplin, with the windows down to find out.)

For the better part of the last four years, ESPN boxing and other national networks have descended on Tulsa. Its surrounding casino-rich area has provided for plenty of fight cards. Make that plenty of good fight cards. "Contender" Season 1 champ Grady Brewer, super middleweight contender Allan Green, recent undisputed welterweight champ Cory Spinks and heavyweight veteran Terry Smith all have consistently fought in Oklahoma for most of their careers.

Promoter Tony Holden has a lot to do with it. Holden needs to get more credit as one of the good guys in the boxing business.

He was the key player when Oklahoma's Tommy Morrison rose to heavyweight prominence. To this day, Tony is the force behind most shows in the state. 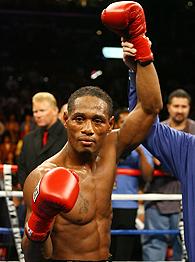 "I helped push for a commission here 15 years ago so Tommy Morrison could fight," Holden explains. "I wasn't going to go forward without a healthy state commission. I naturally do a lot of shows here because it's family. We have tremendous fans; they rally behind it."

"We had a hard time to get the fights to come here and a harder time getting television," he says. "And now we have a tremendous amount of shows here."

Tony's dead-on. Oklahoma had 12 shows in 2006. That's in the same range as two prominent boxing states. Compare it to New Jersey with its Atlantic City base, or Connecticut with the two biggest and most profitable casinos in the world. Both had 15 total shows last year. Seems Oklahoma is more than OK.

Last week Holden held his annual fight-night fundraiser to help underprivileged children in Tulsa. It was a guys' night out with cigars and celebs. He flew in Joe Frazier, Jerry Cooney and the gang. The next night he put forth one of the more action-packed "Friday Night Fights" of the year. Terry Smith and Kelvin Davis gave us a heavyweight show that made people appreciate heavyweights again.

"There was more action than De La Hoya-Mayweather, and it was free! Terry never has a bad fight because he gives everything he has. And hats off to Kelvin for doing the same thing. It turned out to be a blockbuster fight," Holden proudly boasts.

"I thought I won the fight, but there was a lot more I could have done better to put a stamp on that win," Raheem says. "After that fight, I was just waiting to get back in the ring. I've been in the gym just training, waiting."

The wait is now over for the 1996 Olympian. This Friday he takes on Cristobal Cruz on FNF (ESPN2, Friday, 9 p.m. ET). What kind of fighter is Cruz? The kind who turned pro in Mexico as a 14-year-old. The kind Raheem needs to beat impressively in order to get another title shot.

"Zahir has probably fought half of his fights in Oklahoma," says Holden. "Him coming back is a nice touch for Tulsa. Zahir has everything to prove. He can't afford to have a bad fight. He is on stage and needs to shine and he knows that."

Let's see if it can happen. Forget Vegas, AC or the cavernous Connecticut Casinos, it is back to Oklahoma for "Friday Night Fights." Scrap Iron Johnson must be so proud.