When he made it to the 1996 Olympics, Jones was in his head. When he
battled through boxing's political landscape, Jones was there. And even when
he finally won a world title, the specter of Jones stood before him. 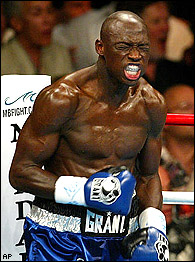 But tonight, with a picture perfect left hook that rivaled those thrown by
Sugar Ray Robinson against Gene Fullmer and Joe Frazier against Muhammad
Ali, Tarver shed Roy Jones Jr. from his back once and for all, in the
process not only regaining his light heavyweight championship, but putting
the boxing world on notice that a new star is born.

When Tarver dressed down Jones during the referee's pre-fight
instructions -- "You got any excuses tonight, Roy?" -- it was one of those
Kodak moments that boxing fans will remember for years. And such bravado
shouldn't have been a surprise coming from a man who has burned out tape
recorders and broken pencil points ever since his controversial decision
loss to Jones last November.

Tarver made no bones about the fact that he
felt wronged by the majority-decision defeat, and while telling anyone
within earshot about it, he vowed to right the wrong the second time around.

Yet bravado is usually only that. Practically every fighter talks a good
fight. It's the rare few who back it up. And if Tarver needed any more
ammunition entering the bout, he got it from the observers who compared this
bout to Jones' rematch with Montell Griffin.

Those of us who made that comparison at least got the early KO prediction
right.

After a tense first round that saw Jones do much of the punching, albeit in
spurts, Tarver didn't want to hear it. He had idolized Jones, and even in the midst of the most heated tirades
leading up to the bout, he acknowledged Jones' status in the fistic
pantheon.

He just would not show that in the ring. He couldn't.

Too many fighters respected Roy Jones too much and lost because of it.

One hesitant step against the champ and you're hit with a flurry of blinding shots, left
to fire back at what used to be the image of a fighter in front of you, but
instead was just a corner post.

Tarver couldn't respect Jones tonight. He knew he'd lose. He had to treat him with the same doubts and the same put-downs that he'd met with from everyone who called him a footnote in the history of one of the greats.

For all of Jones' unorthodox brilliance over the years, it's ironic that a
textbook left hook, delivered as Tarver stepped in with perfect leverage,
would be his undoing.

Jones crashed hard, hesitated as if to get his
bearings, and a shocked boxing world waited for him to rise,
to once again show why he is considered the greatest fighter of this
era.

And like one of the greats, he tried. As the seconds ticked off like
minutes, Jones moved in slow motion to get to his feet, each movement
excruciating in its fragility.

He got up. His legs said no; his heart said yes.

The legs wobbled and won.

Beaten legitimately for the first time in his career, Jones showed that,
like every fighter, he is human. And maybe in the great scheme of things,
this is what he needed to become real to fans who haven't seen him as one of
them.

But tonight was about Antonio Tarver, who is every bit as human as every one
of us. He's battled (and is battling through) dilemmas that have crippled
others, but he's persevered. And while only time will tell if he can put
together a body of work like Roy Jones Jr., for tonight, he's pound-for-pound the best fighter in the world.

He beat Superman with a dream and a left hook 20 years in the making.