LOUISVILLE, Ky. -- Mike Tyson was knocked out in the fourth round Friday night in a shocking end to the latest comeback of the fighter who once was the most feared heavyweight of his era.

Unheralded British heavyweight Danny Williams landed a flurry of punches that sent Tyson sprawling into the ropes, perhaps ending his career with the same kind of fury that Tyson once unleashed on other fighters.

Williams, a heavy underdog, improved to 32-3 with 27 knockouts. Tyson, who was hoping to
fight often and improbably regain his former glories to get out of millions in debt, fell to 50-5 with 44 KOs. The loss was Tyson's first in 41 non-title fights.

Williams immediately proposed to his longtime fiancée, Zoe, the mother of his two daughters, who accepted, and not because the Englishman made a $350,000 purse tonight with a lot more to come. 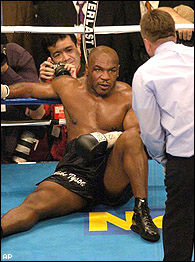 "Williams was laying on him," said Tyson's trainer, Freddie Roach. "I think it wore him out. He had a great amount of firepower. Mike moved his head well, threw a lot of good combinations, but Williams has a lot of heart. He took a lot of hard punches."

The fighter once called the baddest man on the planet went down from a final right hand, then laid helplessly along the ropes, blood streaming down his face. Tyson tried to get up to beat the
count, then fell down again and the fight was waved to a stunning close at 2:51 of the fourth round.

The fight was a free-for-all from the opening bell, with Tyson landing some huge left hooks early, only to take punishment himself when Williams got over his initial stage fright and began brawling
himself.

Tyson was moving his head in the opening round, jabbing and calmly attacking the Brit, who initially, at least, did not appear intimidated. But then a couple of jabs, followed by a right to the body and a left hook to the head and Williams was in trouble.

"I was hurt," Williams admitted. "Tyson still has tremendous punching power. But I saw from the Holyfield fights, that if you keep throwing punches, he doesn¹t recover all that well."

There were a couple of more debilitating body shots and then almost the famous combination that made Tyson the youngest heavyweight champion in 1986 -- the right to the body, a right uppercut to the chin (which missed against Trevor Berbick, but the ensuing left hook gave Tyson his first title). He didn't throw the hook in that combination Friday night. But he landed many more in that opening round, including a double hook to the body and chin that had Williams desperately holding. He somehow made it through the round and suddenly, a real fight broke out.

Fighting in Muhammad Ali's hometown before a big crowd that cheered his every move, Tyson tried with every punch to score the kind of spectacular knockout that would make him a heavyweight contender once again at the age of 38.

But Williams wouldn't go down and then came back with shocking suddenness to win.

"He was a strong guy with a lot of heart," Roach said of Williams. "He showed us things that we didn't see in films. He seized the opportunity of a lifetime."

Tyson, who left without talking, won the first three rounds, but Williams was landing well to the head and when he began throwing punch after punch with Tyson near a neutral corner, Tyson couldn't answer back.

It was Tyson's first fight in 17 months, and only his second
since taking a beating from former heavyweight champion Lennox
Lewis two years ago. But Lewis was a legitimate world champion,
while the 31-year-old Williams' biggest claim to fame was winning
the British heavyweight title.

He was desperately trying to resurrect a career that made him
more than $300 million, but the loss to a 9-1 underdog perhaps
signals the end of an era in the heavyweight division.

"People forget this isn't a peak Mike Tyson. This was a Mike
Tyson who was 38 years old," Williams said. "I thought I could
win."

Tyson's manager, Shelly Finkel, said he twisted his knee late in the first round and it
bothered him.

"He couldn't get leverage," Finkel said. "When the guy was
leaning on him I knew it would be a bad night."

The crowd of 17,253 that nearly filled Freedom Hall came to see
a knockout by Tyson, and when Tyson rocked Williams with a big
uppercut and some left hooks in the first two rounds it looked like
they would get what they came for.

But Tyson was cut in the third round, and Williams showed he was
going to be the bully in this fight. He hit Tyson on the break,
losing a point, then hit him low, and the referee took another
point.

The bully was being bullied, and Tyson couldn't stand up to it.

"Every single round that went by, his punching power seemed to
grow less," Williams said. "So I knew I was going to take him
out."

Williams had fought only once in the United States. He said before the fight he
wouldn't be scared and would beat Tyson in the late rounds, but the end came even earlier than he thought.

"I felt like I had him," Williams said. "I just remember
[Evander] Holyfield fighting him that Holyfield kept coming with
shot after shot."

Tyson won the first three rounds on all three ringside
scorecards. But Williams, who weighed 265 pounds to 233 for the
former champion, kept fighting back and soon seemed to be getting
the better of Tyson when they traded head shots.

In the fourth round, Tyson landed a big left hook early, but
soon Williams took over and was landing almost unanswered when he
drove Tyson into the ropes with the final punch.

Referee Dennis Alfred began counting and got to five, then
waited for Williams to go to a neutral corner, giving Tyson more
time. But even that wasn't enough as Tyson lay beaten, bleeding and
battered on the ropes.

Williams, the former British Commonwealth champion, had an
impressive record but had never fought a name opponent or top
contender. Still, Tyson had ring rust after his long layoff and he
hadn't been beating household names recently, either.

"This guy can punch a bit, so you have to be careful," Roach
warned before the fight.

Tyson earned about $8 million for the 57th fight of a pro career that began 19 years
ago. He could only keep $2 million of it, with the rest going to
pay off some of the $38 million he owes to creditors, under a
bankruptcy reorganization plan.

"You don't have to be sorry with me," Roach replied.

While Tyson wasn't the fighter he once was when he became the
youngest heavyweight champion ever 18 years ago, he still was a big
attraction.

The crowd was surprisingly good, with promoters claiming 12,021
tickets sold. Outside Freedom Hall a handful of rape protesters
waved signs, but inside the crowd was all Tyson's.

Among them was Brad Robinson, who flew in from Columbia, S.C.,
with his father to see the fight.

"If he dedicates himself, there's no one who could compete with
him," Robinson said. "He's still just one punch away from being
the heavyweight champion."

On the undercard, Laila Ali, daughter of the former heavyweight
champion, stopped an outclassed Monica Nunez in the ninth round of
a scheduled 10-round fight.

Although Muhammad Ali was not ringside to see his daughter fight, Laila Ali (18-0, 15 KOs) endured excessive holding by Nunez (9-2), who drew a one-point deduction in the second round for relentless hugging. In the fifth, Ali pounded Nunez to the body and threw the challenger to the canvas. By the eighth round, Nunez was holding so much the referee finally took a
second point from her.

Fighting in the same building where her father made his pro
debut 44 years ago, Ali dominated the fight before Nunez' corner
threw in the towel at 42 seconds of the ninth round.

Also on the undercard, Nelson Dieppa of Puerto Rico won a
108-pound title fight with a majority decision over Ulises Solis of
Mexico.

Information from MaxBoxing.com was used in this report.