ATLANTIC CITY, N.J. Floyd Mayweather Jr., who belittled Arturo Gatti by calling him a C-plus fighter throughout the buildup to their fight, made him look more like an F fighter. 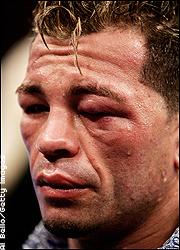 Mayweather landed combinations nearly at will on the slower Gatti and pounded him relentlessly until trainer Buddy McGirt stopped the fight with Gatti on the stool after the sixth round Saturday night at Boardwalk Hall.

The sold-out crowd of 12,675  nearly all Gatti supporters  watched as Mayweather destroyed their hero. Mayweather won virtually every second of the fight to take Gatti's junior welterweight title.

Mayweather (34-0, 23 KOs) is now a three-division champion, having also won titles at 130 and 135 pounds. At 140 pounds, there are huge fights for Mayweather on the horizon. Division kingpin Ricky Hatton was ringside, as was title holder Miguel Cotto.

It was apparent early on that Gatti (39-7), a cult hero among boxing fans because of his propensity for bloody fights and miracle comebacks, had no chance against Mayweather.

He simply could not deal with Mayweather's speed and accuracy. HBO will replay the bout next Thursday at 10 p.m. ET/PT.

"Too much speed," Gatti said. "Things weren't coming out right. He's fast. He's harder to hit than I thought. I was head hunting too much. Buddy kept telling me to stop head hunting but I couldn't stop. He was just too quick."

Mayweather, who was carried to the ring on a chariot with the Queen song "Another One Bites the Dust" blaring, knocked Gatti down in the first round when Gatti, thinking the referee was going to break the fighters, turned away and was nailed with a left hook.

Gatti went to his knees but was up quickly. However, it set the tone for the domination that would follow.

"I was always told to protect yourself at all times," Mayweather said. "The referee [Earl Morton] let us fight."

"I thought the referee would break us apart because [Mayweather] held my head down, but he hit me," Gatti said. "I guess you have to protect yourself at all times. I learned that lesson the hard way."

Mayweather was landing everything  left hooks, right hands, body shots and a sneaky uppercut throughout the fight. The typical scene went like this: Mayweather landed a three-punch combination and quickly moved away without taking anything in return.

"We got off track in the first round," McGirt said. "Mayweather is a very good fighter. You can't take anything away from him, but Arturo got off the game plan. I wanted him to work the body and circle to his left. You can't stand in front of Floyd."