Maybe this wondrous economy the politicians brag about hasn't been so kind to you and you find your wallet on the light side this holiday season.

Perhaps you're tempted to find yourself a solid underdog, a bet that could fatten your bank account and allow you to give gifts of a higher caliber than coal lumps to your friends and family.

Here's a tip from us: Don't choose Sam Soliman to be the man who saved Christmas. If you follow the notion that Soliman will beat Winky Wright on Saturday night in Uncasville, Conn. (HBO, 10 ET), the only person to benefit will be your bookie.

An Australian right-hander with a 31-7 record and a 19-fight winning streak, Soliman is a capable middleweight whose best attributes are a willingness to stomach airline chow and the ability to win despite popgun power.

Soliman, 32, has fought in eight countries since he turned pro in 1997. But he has not fought anyone remotely as capable as Wright (49-3, 25 KOs), the marquee name on the card at the Mohegan Sun Arena. Wright, 34, is not only the best fighter in both the junior middleweight and middleweight divisions but also the best in the sport overall.

After lacing up in Australia for 10 of his first 11 bouts, Soliman boarded a plane for a fight in Fiji. Four months later, he fought in England; a month after that, in Germany. Subsequent matches took place in the Netherlands, Scotland, Japan and the United States. All this proves is he doesn't suffer from a fear of flying.

"We've got a lot in common, me and Winky, and the fact that we both travel the world, we've both looked around for the best fighters that are out there all over the world," Soliman said.

"Took our bags and went out to find and fight the best, and I used all my power and ability as a manager, managing myself to be able to get me up there; and I took fights on short notice, I took fights out of my weight division."

Soliman's lack of pop is no secret.

Of the fighter's 31 victories, only 12 have come via KO. A deeper examination of those stoppages doesn't do the man any favors.

In his second-to-last fight, in February in Australia, Soliman beat Miguel Julio by TKO in the fourth round. Of Julio's five losses entering that bout, four had been by KO. We're not talking a granite chin there.

Solimon's previous fight, in December 2004, was against a soft touch, Jose Alberto Clavero. The Argentine has lost his last three fights via KO. In November 2004, Soliman defeated Diego Castillo by fourth-round TKO. Entering that bout, Castillo owned a respectable record (21-2). But in his last three bouts before the one against Soliman, Castillo was 1-2, and both losses were by KO. 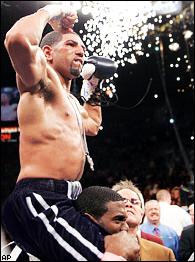 In May 2004, Soliman got a KO victory against Plaisakda Singwangcha, another fighter who owned -- stop me if you've heard this before -- a respectable record (25-4). But now Singwangcha is 26-9, and six of those losses have been by KO.

For that juror in the back row who has been nodding off, another of Soliman's KOs came in April 2004 against a fellow known on www.boxrec.com only as "Moechrody." He's 0-8, and little is known other than that.

Get the point? Does anyone remain who thinks Soliman can pull off the Mohegan Miracle and upset Wright?

Instead, I feel the need to forewarn readers who might have been misled into overestimating Soliman's chances against Wright.

The Australian has pointed out that he has beaten some solid fighters.

"I came through as the goods against a champion in Nader Hamden, and that's what got us a top-five spot in the world. And then beating Joval for the number one position in America set us up for this fight."

I'll admit I had never heard of Hamden. Soliman likes to talk about the unbeatens he has unseated, and Hamden is one.

Another Australian, Hamden was 32-0 coming into the Soliman scrap in June 2003. Soliman won a unanimous decision. Hamden's record is now 38-4 and he has lost consecutive 12-round decisions to Otis Grant and a trio of anonymous Croatian fighters.

Maybe it's time to remove Hamden as a bullet point on your résumé, Sammy.

Is there any chance Soliman will beat Wright?

Sure, there's a chance Wright will overlook the Aussie and not train with his typical intensity. There's a chance that Wright will take a shine to a particular ring card girl at the Mohegan Sun and take a peek at her during the bout and that Soliman will catch him on the chin.

I hope I have to eat this whole column, every last word, and we see a helluva fight and an upset of humongous proportions Saturday because, more than anything, I like to see entertaining fights.

But I wouldn't bet on it. Sam Soliman will not save your Christmas.