In an earlier bout on the same card, Laila Ali stopped Sweden's Asa Sandell in
the fifth round of a non-title bout with her father, former
heavyweight champion Muhammad Ali, watching. 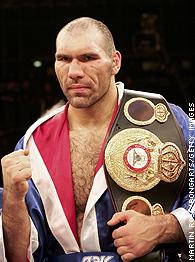 "Boxing is the only sport where you can get robbed without a
gun," Ruiz said. "My promoter Don King should do his job and get
a rematch."

Ruiz manager Norman Stone had to be restrained in the ring when
the announcement was made, and a member of Valuev's entourage threw a punch at Stone while Stone was parading with Ruiz's belt inside the ring.

German promoter Wilfried Sauerland accused him of inciting the crowd, leading to the booing.

Each side admitted the fight was close after Valuev loosened up
and won the middle rounds. He became the first Russian heavyweight
champion.

"I'm always fighting a smaller man and the crowd always
supports the smaller man," the 32-year-old Valuev said of the
crowd's jeers. "But I was perfectly sure at the end I had won.

"I had to wait 12 years for this and now it has happened. It's
fantastic."

Ruiz, who weighed 85 pounds less than Valuev at 238 and was 10
inches shorter, appeared to have the fight in hand, using a
jab-and-grab tactic to slip in a few punches and then tie up
Valuev.

Valuev began throwing combinations in the seventh round, adding
to a left jab that landed from the opening round. In the ninth,
Valuev even danced a bit.

Valuev landed the only punch that did damage in the final round,
hitting Ruiz on the chin with a straight left that wobbled the
champion. Ruiz clinched his way to the end of the fight.

The American used the clinching moves that carried him through
11 title fights, with wins against Evander Holyfield and Andrew
Golota.

"We knew beforehand you can't have a beautiful fight against
John Ruiz," Valuev's trainer Uli Wegner said. "But my fighter
jabbed him the whole fight and later he used his physical
advantage. It was close, but he deserved the verdict."

This was the latest setback for Ruiz after losses to two former
middleweights. He was beaten by Roy Jones Jr. and James Toney in
April, but was given the title when Toney was stripped of the crown
for testing positive for steroids.

At the news conference after the bout, Stone accused the
Germans of manipulating the fight, although they did not choose the
judges from New Zealand, Australia and Mexico.

Ruiz's camp said they will petition for the rematch with the
WBA, which they did successfully for a Holyfield fight.

The 32-year-old Valuev is a former basketball player and discus
thrower who was fighting for almost nothing in Russia until he was
discovered by Sauerland two years ago.

"This is the best New Year's gift I could have," Valuev said.
"I'm not thinking about being the first Russian champion, I'm
thinking of improving, so I can keep the title two or three
fights."

In the women's undercard fight, Ali caught the taller Sandell with a left hook late in the fifth round,
then knocked her back with several punches before the referee
stepped in.

Muhammad Ali, in Berlin to collect a peace prize, walked
ringside to kiss his daughter after she ran her record to 22-0 with
19 knockouts.

Ali, the women's WBC champion, had a tough time during the first
two rounds from the little-known Swede, who used her height to
connect several times.

"I expected the fight to be a little tougher than usual," Ali
said. "I had a game plan. They stopped the fight too early, but
they do that in women's boxing."

Sandell's record fell to 3-2 with one draw. The 37-year-old is a
former amateur European champion who now works as a journalist.