LAS VEGAS -- For months, Ricardo Mayorga tried to get inside Oscar De La Hoya's head with his taunts and his threats. Then, when it came time to fight, De La Hoya went upside his.

Returning from a 20-month layoff, De La Hoya scored a ferocious sixth-round TKO of Mayorga to win a junior middleweight title Saturday night before an adoring crowd of 13,076 at the MGM Grand Garden Arena.

It marks the 10th world title in six weight classes that De La Hoya has won and none could be sweeter.

In his last fight, De La Hoya (38-4, 30 KOs) suffered his only knockout loss, on a ninth-round body shot from then-undisputed middleweight champion Bernard Hopkins. But De La Hoya, 33, didn't want to end his career on the canvas and professed all week how important it was for him to go out as a winner and champion.

He succeeded in grand style.

After standing up to Mayorga's wild, initial assault, De La Hoya put on a brutal display.

He dropped Mayorga (27-6-1) with a right hand followed by a huge left hook in the first round. Mayorga rose but walked into another hail of shots and was about to go down for a second time when De La Hoya ripped him with another right hand, but Mayorga grabbed on to De La Hoya to stay up.

"I was hitting him with my right hand and he felt the power," De La Hoya said. "No matter what, I was going to stand up to him and let him know right away that I was here to fight. I had to show the bully that I wasn't going to back down."

It was more dominance from De La Hoya in the second round. He threw a seven-punch flurry that sent Mayorga into the ropes in a daze with 30 seconds to go.

Mayorga's only positive moment came in the third, when an uppercut stunned De La Hoya, but De La Hoya had done more than enough to win the round. 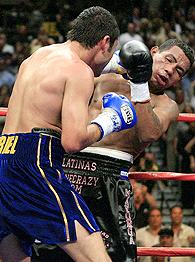 For the rest of the fight, De La Hoya fed Mayorga a steady diet of left hooks and right hands, many that landed so easily it was as though Mayorga had never heard of defense.

"When I threw my punches and was hitting him, I could tell he was feeling them because he was wincing," De La Hoya said.

A frustrated Mayorga resorted to trying to hit De La Hoya behind the head as the fifth round ended, but referee Jay Nady issued a stern warning.

It wouldn't matter because De La Hoya ended it in the sixth.

Firing punch after punch, De La Hoya dropped Mayorga to his knees, and although Mayorga got up, he was in bad shape.

De La Hoya pounced on Mayorga immediately and never stopped firing as Mayorga wilted along the ropes. De La Hoya fired 21 punches, landing the majority of them, forcing referee Nady to step in at 1:25.

"Oscar is a very hard puncher," said Mayorga, who was making the first defense of the vacant belt he won last summer. "I'm not hurt. I'm just heartbroken."

The eruption from the pro-De La Hoya crowd when the fight was stopped was electrifying as De La Hoya celebrated in the middle of the ring.

He and Mayorga put their bad feelings aside as they spoke in the ring after the fight.

Mayorga, who also served as the perfect foil and was knocked out by Felix Trinidad in Trinidad's comeback after a long layoff, apologized for the venomous trash talk leading up to the fight.

De La Hoya, who earned at least $8 million to Mayorga's $2 million, said that he picked Mayorga as his opponent because he needed someone to motivate him, and he figured Mayorga's ruthless words would do the trick.

"The way he was talking about me and my wife and my son, Gabriel, motivated me to go right at him," De La Hoya said. "I knew he was going to talk bad about me, talk dirty, and that was the motivation I needed to get myself up for this fight."

De La Hoya did a fine job of avoiding Mayorga's wild shots with his tight defense.

"We have worked on blocking punches and on my defense for all the years I have been with [trainer Floyd Mayweather Sr.]. Tonight it all clicked," De La Hoya said. "He fought recklessly, but I stood my ground and he saw I wouldn't back down."

HBO will rebroadcast the bout next Saturday night (9:45 ET) along with the live Luis Collazo-Ricky Hatton welterweight title bout.

Before the fight, De La Hoya said he would either retire after the fight or after a Sept. 16 bout against an opponent to be named.

After the glorious victory, he was undecided about his future.

"The fight just ended, so I will have to talk to my people and see where we're going to go and see what's next," he said. "There are a lot of emotions right now, so I can't really say."

The opponent many want to see is pound-for-pound king Floyd Mayweather Jr., the son of De La Hoya's trainer. It would be a mega fight with a juicy storyline.

"I respect Mayweather Sr., so I will sit and talk to him and my people, and myself alone, and think through every scenario -- where will be the glory, which guy will be the best for me and whether or not it is even worth it," De La Hoya said.