Joe Louis' exploits are accorded no special place of prominence in boxing record books. His 71 bouts are sandwiched between the records of James J. Braddock, whom he succeeded, and Ezzard Charles, the fighter he was succeeded by. Both Braddock and Charles had more professional engagements, as did Jack Johnson, Jack Dempsey, Gene Tunney, Primo Carnera, and Max Baer. And there have been men who had more KOs, Carnera and Charles; a higher percentage of knockouts in defense of their titles than Louis, Marciano and Foreman; and more wins.

But no heavyweight champion -- and probably no sports figure -- ever captured the imagination of the public, fan and non-fan alike, as the smooth, deadly puncher with the purposeful advance who, at his peak, represented the epitome of pugilistic efficiency. And no man was so admired and revered as this son of an Alabama sharecropper who carried his crown and himself with dignity, carrying the hopes of millions on his sturdy twin shoulders.

But the measure of the uncomplicated man they called "The Brown Bomber" cannot be found merely inside the ring. For, in a field devoted to fashioning halos, Joe Louis wore a special nimbus. And wore it with a special dignity.

Joe Louis used his words as he did his punches, with a commendable economy of effort, saying a surprising number of things, and saying them in a way we all wish we had. There was his evaluation of his country's chances in the global confrontation with the Axis powers: "We'll win 'cause we're on G-d's side." Dignity. And there was his enunciation of his opponent's chances in the second Conn fight: "He can run, but can't hide." Honesty.

But Louis' place in the pantheon of greats doesn't rest on his using his words, but on his using his body -- and the bodies of his collective, and soon-to-be collected, opponents. He drove Max Baer into the canvas like a nail, straightly driven, his body almost flush to the surface. He hit leading contender Eddie Simms so hard with his first punch that the beclouded Simms walked over to the referee and asked, "to take a little walk around the roof." He sent out one single shot that sifted through the supposedly impenetrable network of elbows and arms covering Paolino Uzcudun's face, knocking out the "Basque Woodchopper" for the first time in his career -- and knocking out his front teeth in the process. He destroyed Primo Carnera, shifting his face like pudding and turning the gargantuan's picket-fence smile into that of a hurt, kicked dog with one punch on his way to hewing him down, bit by bit, in six rounds. He dropped the human butcher block Tony Galento with a left hook in the second round of their title fight that was described by humorist Bugs Baer as being "so hard they could have counted him out in the air." And he drove most of his other opponents who, crediting the growing legend, approached the ring as though it were an abattoir into the Boxing Home for the Bewildered. 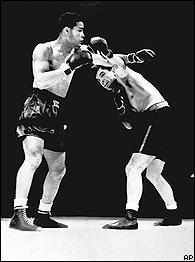 Joe Louis was granted a special place as a superhero by enthusiastic reporters, who believed he was the most dependable story in sports, and by the public, who began to view him as invincible. But Max Schmeling, brought out of near-retirement to be another sacrificial lamb, derailed the Louis bandwagon, hitting him with a right hand over a lazy left no less than 54 times and finally knocking out the myth-in-the-making in the 12th. For most fighters it would have been devastating, their utter confidence, which was the essential property for success, receiving a permanent setback. Usually their entire flashy structure settles as earthward as the fallen fighter. But not in the case of Joe Louis. He would come back within two months to knock out another ex-champion, Jack Sharkey, and then, almost one year to the day after his destruction at the fists of Schmeling, would win the heavyweight championship of the world from James J. Braddock.

Louis would avenge his loss to Schmeling with a 124-second annihilation that would set back the cause of the Master Race and bring joy to millions to Americans, and then embarked on what was charitably called "The Bum of the Month Campaign," giving every heavyweight challenger a job, much like the WPA. He was the very symbol of perseverance, plodding forward, his imperious mien tracking down his prey, his indefatigable patience waiting for the chance, always punishing his opponent with his presence. And then he would pull the trigger with the two fastest hands in the history of the heavyweight division moving almost as if they did what they pleased with an intelligence all their own in a graceful exercise of power. And, finally, when he had hooked his opponent, Louis, the greatest finisher in the history of boxing, would never let them get away -- for references, ask Bill Conn.

Louis would retire as the undefeated champion after running out of competition and then come back. But he had emotionally packed it in, fighting only for the benefit of the IRS and the deified memory of his fans, many of whom were to leave Madison Square Garden the night of October 26, 1951, their eyes wet with unshed tears for their hero who had been beaten by a younger future champion, Rocky Marciano.

In boxing's galaxy, Joe Louis was a star for a longer period of time than most, burning intently, and with dignity. He will be remembered not only as a benchmark for all boxers, but as a lighthouse who lit the way for so many.