Former two-time heavyweight champion Mike Tyson, who says he hates fighting, is getting back in the ring anyway, if only for an exhibition. 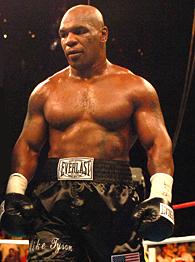 In need of money, the bankrupt Tyson, who squandered an estimated $300 million-plus in ring earnings, is scheduled to appear Thursday afternoon at a news conference at the Chevrolet Centre in Youngstown, Ohio, to announce "Mike Tyson's World Tour."

McPherson, who has known Tyson for many years, said the bout is the first of as many as 12 four-round exhibitions Tyson has agreed to take part in.

The bout will not count toward Tyson's official ring record of 50-6 (44 KOs), although the $29.95 pay-per-view card will also include other officially sanctioned boxing matches, McPherson said.

"I think the greatest thing Tyson can do for himself is to do this, go around the world and meet people who have never met a star or an icon like Tyson," said McPherson, who was in full hype mode. "And the prices will be right. Here in Youngstown, the top ticket is $200. That used to be the cheapest ticket for a Tyson fight. Here, you're talking about tickets for $25. Where can you see Tyson in the ring for $25?"

Tyson last fought June 11, 2005, when he quit on his stool after six rounds against unheralded Kevin McBride. Following the bout, Tyson announced his retirement.

However, boxing is what Tyson knows, and he needs money to pay off his creditors. That is why, for the past month, he had a gig at the Aladdin Resort & Casino in Las Vegas to perform public workouts with trainer Jeff Fenech in a ring set up just outside the casino's buffet.

The open sessions drew hundreds of fans and curious onlookers. Tyson would skip rope, hit the pads, work up a sweat and sometimes answer questions from the public.

"I truly hate fighting. I've got a bad taste in my mouth," Tyson told The Associated Press during one of the sessions. "I'm looking to make a buck like anyone else."

Now, he hopes to make a few more bucks in the exhibitions. McPherson said Tyson could even wear protective headgear if he wanted, although he doubted Tyson would.

"Hey, he's a guy who knocked out the heavyweight champion," McPherson said. "And it's an exhibition. Joe Louis did them. Jack Dempsey did the. Muhammad Ali did exhibitions. It is an exhibition tour. I ain't lying to anybody."

One potential issue that could keep Tyson from participating is an exclusive Showtime contract, under which Tyson still owes the network at least one more fight. According to those with knowledge of the deal, the contract forbids Tyson from engaging in any kind of unarmed combat sports -- exhibition or not -- without the network's involvement or permission.

McPherson said he has heard that, but no one has talked to him about it.

"It was brought to my attention, but why hasn't anyone called to tell me that? No one has called or said anything," he said. "I talked to [Tyson's ex-wife] Monica [Turner] about it. I don't think Showtime has exhibitions in that clause. Remember, this ain't a fight. It's an exhibition, like he's going to the gym. They can't stop him from going to the gym.

"I wish someone could come out of the woodwork and tell me we can't do this," he said.

Showtime, which was investigating the event, had no comment.

McPherson said the card would also include former lightweight titlist Paul Spadafora (38-0-1, 15 KOs) in a 10-round junior welterweight bout. Spadafora, of Pittsburgh, was recently paroled after spending seven months in prison followed by a stint in a halfway house for the non-fatal shooting of his then-fiancee in 2003.

However, Spadafora promoter Mike Acri told ESPN.com that Spadafora's appearance was not a done deal.

"It's premature that the fight is going to happen with Spadafora, due to the fact that we had been expecting to fight in November instead of October," Acri said, adding that Spadafora would not attend the news conference even though he was listed on the announcement release.

Acri said he wasn't sure if Spadafora, who hasn't fought since July 2004, could be ready in time. Acri said Spadafora has only sparred three times since being released from the halfway house.

McPherson also said that Cleveland junior middleweight prospect Juan McPherson (3-0, 2 KOs), no relation, would fight on the show. Juan McPherson was a standout amateur who lost a court fight to gain a spot on the 2004 U.S. Olympic team after he was medically disqualified because of a neck injury.