Laila Ali stopped a thoroughly outclassed Shelley Burton at 1:58
of the fourth round to defend her WBC women's super middleweight
championship Saturday night. 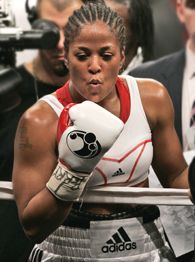 After throwing kisses to her father, boxing great Muhammad Ali,
when she entered the ring, she made quick work of Burton, of
Kalispell, Mont. A left-right combination smashed Burton's nose and
an eruption of blood fell to the canvas as referee Arthur Mercante
Jr. stopped the bout.

"I wanted to knock her out cold," Laila Ali said, "but
unfortunately she turned her back, which meant she didn't want any
more."

Muhammad Ali, whose 1971 loss to Joe Frazier was one of the
Garden's most memorable fights, is 64 and suffering from
Parkinson's disease. He entered the Garden riding a golf cart, got
off and acknowledged the crowd of 14,260 that was chanting for him
even while Manuel Medina and Kevin Kelley were in the ring
fighting.

Then Ali sat next down to talk to Dustin Hoffman before he
watched his 28-year-old daughter's performance.

"It's always great to have him here and have him see me
fight," Laila said.

It was Laila's first bout in 11 months -- her famous father was
at that one, too -- and she displayed no rust. Landing straight
rights and looping ones, she easily penetrated Burton's defense. At
the same time, she blocked nearly everything Burton threw.

After running her unbeaten record to 23-0 with 20 knockouts, Ali
stood on the ropes in front of her father and waved. Ali stood up
and waved back, got onto the golf cart and left the arena to loud
cheers.

"I'm still on a high," said Ali of fighting at the Garden. "I
haven't come down from it yet. It feels great. They are true boxing
fans at the Garden; fans appreciate the effort."

Medina won the IBF junior lightweight bout designed to propel
the winner into a title shot. He took a majority decision, winning
115-113 on two cards, while the other judge had it 114-114.

Both are former world champions.

Medina built an early lead by keeping Kelley at a distance and
consistently beating him to the punch. But Kelley steadily came on,
particularly in the ninth through 11th rounds. Medina had a strong
final round, though, and it probably made the difference.

Unbeaten heavyweight Derric Rossy won his 14th straight fight,
outpointing Shannon Miller. Rossy, who played football for a short
time at Boston College, fought the second half of the bout with
blood running down his left cheek. But he scored a unanimous
decision over the game but outmanned Miller (14-3).