LAS VEGAS -- Many expected the third bout between Manny Pacquiao and Erik Morales to be the fight of the year. Instead, Pacquiao administered a brutal assault on Morales as he stormed to a third-round knockout in their junior lightweight showdown Saturday night to put an exclamation point on their trilogy and leave Morales' future in doubt.

"I like that he came out at me. It gave me a chance to knock him out."
-- Manny Pacquiao

"I like that he came out at me," said Pacquiao, who won the trilogy 2-1. "It gave me a chance to knock him out. I believe I am faster than him, and quicker than him, and stronger than him. I think he felt my power."

The overflow crowd of 18,276 at the Thomas & Mack Center was in a frenzy from the opening bell as the two picked up where they left off in their January rematch.

They traded with abandon, but it was clear Pacquiao was stronger, faster and better. 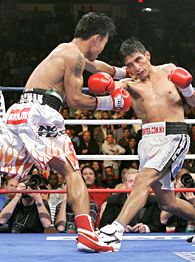 Although both were landing hard punches, Pacquiao cracked Morales with a left hand with about a minute remaining in the second round. Morales fell into the ropes and down to his knees with a disgusted look on his face.

He tried to rally, but his punches didn't seem to hurt Pacquiao.

Pacquiao dropped him with about a minute to go, and although Morales made a brief rally and hurt Pacquiao with a right hand, it was his last stand.

Pacquiao shook off the blows and drilled Morales with another left hand that knocked Morales down. With a resigned look on his face, Morales sat up with his back against the ropes and referee Vic Drakulich counted him out at 2:57, sending the massive Filipino contingent in the crowd into bedlam.

"I was looking to my corner," Morales said. "They were urging me on to get up, but I knew it was futile. No point. I was a beaten man tonight."

"I was looking to my corner. They were urging me on to get up, but I knew it was futile. No point. I was a beaten man tonight."
-- Erik Morales

Their first two fights were much more competitive.

Morales won a close unanimous decision in their March 19, 2005, brawl. In the rematch on Jan. 21, Morales burst to a lead but Pacquiao rallied to score two knockdowns and a 10th-round TKO.

"I was very surprised the fight went this short," said Freddie Roach, Pacquiao's trainer. "I think the weight loss was too much for Morales. We expected the fight to go much longer."

The overwhelming victory probably seals fighter of the year honors for Pacquiao and sets him up for huge future business, including a possible rematch with division champion Marco Antonio Barrera, whom Pacquiao knocked out in a featherweight fight.

"As of now we don't want to discuss Barrera," said Pacquiao, who earned $3 million plus a piece of the pay-per-view profits. "I'm going back home to celebrate my victory. Millions are in the Philippines watching and celebrating my victory."

Barrera is signed with Golden Boy Promotions, the rival of Top Rank, which promoted Pacquiao for this fight. Pacquiao signed a seven-fight deal with Golden Boy before opening training camp with the idea that if he beat Morales, he would fight Barrera in a March rematch.

"I was very surprised the fight went this short. I think the weight loss was too much for Morales. We expected the fight to go much longer."
-- Freddie Roach, Pacquiao's trainer

However, Top Rank's Bob Arum said he also has futures on Pacquiao and that Pacquiao tried this week to return his signing bonus check to Golden Boy, which refused to take it.

Arum would like to take Pacquiao to Macau in March, possibly to face junior lightweight titlist Edwin Valero, a Venezuelan who is based in Japan.

The matter could wind up in court with a judge deciding where Pacquiao, 27, goes.

Against Morales, he didn't need any judges, as he left Morales' career in tatters.

After a glorious run in which he won world championships in three divisions and became one of the greatest Mexican fighters in history, Morales, 30, has lost three in a row and four of five fights.

He comfortably made 130 pounds for the fight after so many past struggles and he spent months working with personal trainers. He even had his father, Jose Morales, back in his corner after a one-fight absence.

None of it worked.

"I did my best," said Morales, who had suffered only a debatable knockdown to Barrera in the first fight of their epic trilogy before going down five times in the past two fights with Pacquiao. "I was in great physical condition and mental condition, but Pacquiao was just too much. He was too fast and too strong."

When asked about retirement, Morales, who earned $2.75 million plus a percentage of pay-per-view profits, said he would need to think about it.

"I had a long, illustrious career," he said. "I've done it all. It might not be the best thing [to continue]. It was always a pleasure on my part to thrill people with great, great fights."

HBO will replay the bout next Saturday (10:15 p.m. ET/PT) along with live coverage of the Juan Manuel Marquez-Jimrex Jaca featherweight title bout.