"This is your big opportunity."

"You have to look good." 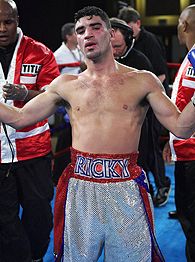 "You have to be perfect."

For 17 years, Ricky Quiles waded through the murky waters of professional boxing in search of one thing. It wasn't the million-dollar payday, though that would have been nice; it wasn't the fame; it wasn't to get his picture on the cover of a boxing magazine.

He just wanted to call himself a world champion.

Through years of struggle, of fights against apathy from the boxing world, as well as bouts with alcohol and drugs, Quiles emerged with his health, sanity, and skills intact. He put together a six-fight winning streak from 2003 to 2006, and finally had secured a fight for the interim IBF world lightweight title against Julio Diaz on May 18, 2006.

Then, the roof caved in.

"I had never been in a world title fight," said Quiles, owner of four regional titles, but never the big one. "I had been in big fights, but never a world title fight. I put so much pressure on myself, it stunted my ability. I worried myself to death over anything and everything, rather than just fighting and doing my job."

Quiles couldn't sleep the night before the biggest fight of his life, and once he was in the ring, he fought like a tired man as Diaz put on a 12-round clinic en route to a near-shutout decision win and the interim title.

"I was very surprised," Quiles said. "I had been nervous before, but this was different. I wondered 'What's wrong with me, why am I going through this?' It was just a lack of experience in the world title arena."

To most observers, Quiles' lack of mental preparation for the biggest fight of his career was a fatal error, one that would forever put him in the "what might have been" category. Let's face it, he's 36, a southpaw lightweight, and only eight of his 39 wins have been by knockout. Not exactly a dream assignment for marketing folks, but in the always unpredictable world of boxing, Quiles has lucked into another try at the brass ring on March 2, when he faces Nate Campbell in an IBF title eliminator on ESPN2's "Friday Night Fights."

The prize? A shot at Diaz, or in Quiles' case, redemption.

"The Diaz fight was one that I could have won if I would have been more aggressive," said Quiles (39-7-3, 8 KOs). "Unfortunately, it didn't happen that way and I wasn't mentally prepared. But I assure you that for the Nate Campbell fight, I'm preparing myself mentally and physically. I know Nate Campbell is a strong fighter, both of us have been there before, and we're both going in there to do our best. And winning this fight gives me a chance to get revenge on Julio Diaz."

Quiles admits that he didn't expect this shot to come, at least not this soon. It's the mental price you pay after being ignored for so long in this game, and Quiles has been ignored more than most. A three-time Cleveland Golden Gloves champion, the native of Lorraine, Ohio, turned pro at 19 in 1989, already the father of a 4-year-old daughter, Ashley. He started his career off with a 4-1-1 record before winning 22 of his next 23 bouts and gaining notices as a fighter with the potential to be a world champion.

Those notices didn't extend to the sanctioning bodies, though, and after a six-round win over Rodney Wilson in July 1996, Quiles left the sport in disgust.

"I was tired of all the entanglements of trying to get here, trying to get there," said Quiles. "You have to have the right people behind you to get through the politics of boxing. Of course, that led into other things, me dabbling in alcohol, drugs, and so on."

"I've been clean and sober for 2½ years now, and something I teach my children and other kids around boxing is that we're all gonna go through ups and downs and you can't stay down and not try."
Ricky Quiles

Quiles battled his out of the ring demons over the next two years, and got them in check enough to return to the ring in October of 1998. His performances were spotty over the next few years, as he would win enough to get a big fight, such as those against Ahmed Santos, Goyo Vargas, and Terrance Cauthen, but then he would lose those fights and move back down another couple rungs on the lightweight ladder.

He wouldn't quit though, and as 2004 rolled around, he was completely clean and sober and ready to make a final run. And it wasn't only for him, but for his daughter and his two sons, Ricky Jr. and Julian.

"I've been clean and sober for 2½ years now, and something I teach my children and other kids around boxing is that we're all gonna go through ups and downs and you can't stay down and not try," said Quiles. "I want to be a good reflection to my children, I want them to be proud of me. The way I am in my life now, I wish I was like that 10 years ago. To be persistent is the key ingredient for me."

There would still be hurdles to get over though, as Quiles' first bout of 2004, a 12-round win against Luis Villalta on Feb. 28, ended in tragedy as Villalta died four days later from injuries sustained in the bout.

"It was very difficult for me -- I cried a lot," said Quiles. "I was so hurt and distraught over the situation. I knew that it really wasn't my fault, but overall the whole experience was quite overwhelming."

Returning with the blessing of the Villalta family, Quiles came back to the ring in August 2004 and ran off decision wins over Jose Quintana, Edner Cherry, Javier Jauregui, and Jeremy Yelton, leading to his title shot against Diaz. It should have been the comeback and feel-good story of the year, but it wasn't to be. Well, at least not yet.

"I think when I win the world title, I'm gonna be crying like a little girl. You're gonna feel my heart."
Quiles

"Before, I got frustrated to the point where you sometimes want to give up and find something else to do," Quiles said. "But I look at it like, 'OK, this is a challenge for me, and I don't want to just quit on my dream.' It's one thing to fail at it, and another to quit on it. I won't quit on it. I'm very fortunate that I'm getting another opportunity, and I count my blessings."

He also knows that this might very well be his last shot, though he doesn't want to get crushed under such pressure.

"I'm not putting that pressure on myself," he said. "But even though I do feel very young, I am 36 years old, and I know that this fight could very well be my last opportunity. I'm just learning about who I am as a man and as an athlete. I'm grounded right now and I'm proud of myself. I learned through a lot of mistakes and unfortunately, I had to reach this age to find out what life is all about. I hope it carries on to my last years of boxing."

And what keeps Quiles moving is the pursuit of that belt, and what it will mean to him to finally strap it around his waist. It's something he can't think stop thinking about.

"I dream about that every night and I think about it all the time," he admits. "I'll be sitting there watching TV and I'll slip into a moment where I'm in the middle of a title fight and I strap that belt on. I'll even throw a jab here and there and people will look at me like 'what's wrong with you?' and I'll snap out of it. [Laughs] I'll even have conversations with people and my mind drifts off into winning a title. That happens a lot."

And even though there are those out there who would look at Quiles with a title belt around his waist and scoff, 'Well, he's not the real champion,' you can't tell him -- or any other fighter for that matter -- that their accomplishment is meaningless. For a fighter, this is what they've always worked for, to hear 'champion of the world' announced before their name. And you can never look down on that.

"Winning the title keeps my blood boiling, it keeps me active, it charges my battery," Quiles said. "It would complete my career. And I'm speaking for myself, but I think for any fighter, to put that belt around your waist is to have the ultimate feeling of success and of self-worth. You feel like you're on top of the world and validated in your profession. I think when I win the world title, I'm gonna be crying like a little girl. You're gonna feel my heart."