To understand why a boxing analyst would find himself so impressed by Evander Holyfield's performance Saturday night against unheralded Vinny Maddalone, you'd have to rewind to 2004.

He lost almost every round to Donald, who is a slick boxer but will never be regarded among the division's elite, even in this watered-down era. And it isn't like the rounds were close or the judges had to peer intently to decipher the action.

The man regarded as one of the finest fighters of his time landed a beyond-paltry 78 punches against Donald, a woeful 6.5 per round.

No, Holyfield looked listless, and fight pundits everywhere reached for their forks. Holyfield, they knew, was done.

All agreed, it was time for Holyfield to make a gracious exit from the sport that punishes past-their-prime practitioners like no other. 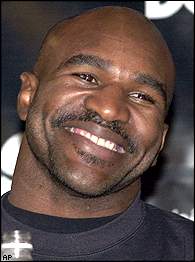 "I'm not looking to end his career if it's not warranted," NYSAC chair Ron Scott Stevens said right after the Donald debacle, "but the health and safety of the boxer is the main concern of the state commission. To my practiced mind, Holyfield shouldn't be fighting anymore. It's the responsibility of the state athletic commission to save a boxer from himself. Evander Holyfield has absorbed enough punishment throughout his great career. It's time the bleeding stopped."

In 2005, New York amended its ban and placed Holyfield on an "administrative suspension," which means he cannot get licensed to fight in the state but is allowed to seek licensing in other states.

He passed a battery of tests and got himself a license in August 2006 to fight in Texas. The pundits' reaction to this development ranged from gaping yawns to outright disbelief and blatant disrespect. The word "delusional" was bandied about.

How many people believed Holyfield, now 44, when he said he'd get another shot at a heavyweight crown? You wouldn't need your toes to count 'em, your fingers would've been sufficient.

Holyfield and his trainer Ronnie Shields were on the short list of Kool-Aid sippers. But Holyfield himself was a bit surprised at his own agility in training camp.

"I did well in practice and I realized I was able to use the ring more," he told ESPN.com on Monday afternoon. "And I realized I had my combos back and I could slip punches. I was back in counterpunching mode."

Holyfield described himself as someone who's "seldom able to impress himself." In training camp, he allowed himself a few moments of giddiness when skills and traits long absent re-emerged.

Shields, one of the sole believers, figured a different Holyfield would be on display because he was finally physically unimpeded. Holyfield had had two surgeries on his left shoulder, and one surgery on his right shoulder, and those procedures, the trainer felt, would take a long spell to heal properly.

Shields had been in Holyfield's corner during his most fertile period, during 1988-92, and came back aboard for the Donald debacle. He knew full well that the super-skeptical fight writers would regard with derision Holyfield's quest to become the undisputed heavyweight champion. So, he crafted a fight plan for the oldster to show that he had some spring left in his step against the rugged and willing journeyman Maddalone.

"The first two rounds, I wanted to show them he got legs," Shields said. "I wanted him to use jabs, then come with hooks. That stiff jab was tearing up Maddalone."

Indeed, Holyfield showed the foot movement that kept him afloat in "Dancing With the Stars" in 2005, and his hand speed was too much for Maddalone, who ate copious jabs and an earful of left hooks.

By the third round, Holyfield was setting down on his shots and tearing up Maddalone to such an extent that the loser's cornerman, Al Certo, stepped up to the ring apron and threw in the towel.

Holdout disbelievers who haven't jumped back on the Christian Warrior's bandwagon point to Maddalone's limited skills and reputation to diminish the import of Holyfield's outing. Maddalone brought a 27-3 record to the bout in Corpus Christi, and he'd never fought a heavyweight within sniffing distance of the top 20.

Shields has an answer for the naysayers.

"You can look at tapes of him before Saturday -- I'm talking when he fought Tyson ['96, '97], and go back further than that, when he fought Riddick Bowe ['92, '93, '95]," the trainer said. "And then you can look at him Saturday night. You saw the same guy. He was exciting. I don't think anybody in the crowd was disappointed."

Point of fact, as I watched a tape of the bout on Monday, I fixed on a sequence late in the first round. Holyfield put together a multi-punch combination and I needed to use the super slo-mo on my DVR to count how many blows he threw. For the record, it was a six-punch combo he unleashed to cap the first, and that sort of activity would be a pesky slew to negotiate for several boxers who hold titles right now.

For starters, the Holyfield who looked like he'd shaved 10 candles off the cake against Maddalone wouldn't be a walkover for Russian giant Nikolay Valuev.

The 7-0, 330-pounder puts his WBA strap on the line against Ruslan Chagaev on April 14, but if he gets past the 22-0 Uzbek, he'd be a compelling test for Holyfield.

The David versus Goliath imagery would be any promoters' big dream. Valuev has defended his title against Owen Beck, Monte Barrett and Jameel McCline in the last nine months, and even Holyfield holdouts would have to concede that the Evander we saw on Saturday is at least on par with any of those fighters. Holyfield's promoter, Kathy Duva, has him lined up to fight June 30 in Canada and expects a title bout to follow in the fall.

For his part, Holyfield isn't lobbying for one opponent over another. His confidence in himself is total and complete.

"The Valuev fight and the David and Goliath angle is a good story," he said. "But my goal is to be the undisputed heavyweight champion, and I want to show that age ain't nothing but a number. Some of these guys may be bigger, with longer reach, but I can outthink these guys."

Another belt holder whom Holyfield could target is Shannon Briggs, the 35-year-old Brooklyn native who snagged the WBO's heavyweight crown in November when he downed Sergei Liakhovich. Briggs is slated to make his first defense on June 2 against Sultan Ibragimov in Moscow. The Holyfield who showed ample energy, a snappy jab and surprising agility against Maddalone would be a formidable task for Briggs, who suffers from asthma and stamina woes.

Oleg Maskaev, 38, also owns a heavyweight title: the WBC's version. He'd be an age-appropriate choice for Holyfield to target, but must first deal with 35-year-old Vitali Klitschko, the former WBC crown holder who retired because of injuries in 2004 but has pronounced himself fit enough to resume fighting.

The other titlist, Wladimir Klitschko, the IBF king, would seem to be too tough a nut to crack for Holyfield, even if he is remarkably resurgent. Klitschko is 6-6, owns a lethal, thudding jab, and at 30 would likely prove to be too energized for the comebacking Holyfield.

That said, it might be unwise to double down against Holyfield at this juncture. His dream, to consolidate the heavyweight titles, was seen as a pipe dream. It still seems like a tall order.

But obtaining a title fight against one of the lesser belt holders, and winning, doesn't seem like the babbling rants of a brain-damaged pug irrationally bent on turning back the clock to stave off the inevitable journey to retirement and obsolescence.

Michael Woods, the news editor for TheSweetScience.com, has written for ESPN The Magazine, GQ and the New York Observer.