Why it matters: It's unfortunate that a great fighter such as Genaro Hernandez was merely a trial horse for both Mayweather and Oscar De La Hoya early in their careers, but both young stars went through him as they broke into boxing's major league, and they were Hernandez's only two losses.

Mayweather was 17-0 and challenging for his first world title belt (WBC super featherweight) when he got to "El Chicanito." At 21, Floyd had established himself as a boxer-puncher whose dazzling hand speed enhanced the force behind his fists. In his previous fight, against 6-foot-1 Tony Pep, Mayweather landed almost 200 more punches than his opponent over 10 rounds. 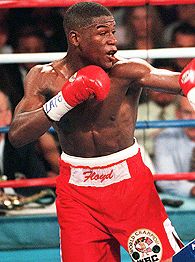 Halfway into the first round, Mayweather fell in his corner while backing away from a Hernandez rush, but it was ruled a slip. After that, his speed and skills began to emerge. He seemed to land two punches for every one from Hernandez, coming from multiple angles with hard jabs, left hooks, straight rights and uppercuts.

Hernandez was backed against the ropes for stretches of Round 5 while Mayweather targeted openings, and a hard right uppercut rattled Hernandez's jaw. In the sixth, Hernandez tried luring Mayweather into traps, but the traps never sprung. In the seventh, he tried to bull forward, his head in Mayweather's chest. But when they went toe-to-toe, Floyd was faster on the inside, too, with hard, short hooks and uppercuts.