Why it matters: Fighting for the 11th time in less than a year since turning pro in late 1992, undefeated De La Hoya, 20, was knocked down for the first time in his boxing life, including his more than 200 amateur bouts. His swift and brutal retaliation gave the first glimpse of a wicked ring tenacity that De La Hoya's charming public persona camouflages -- and revealed his underrated mean streak. 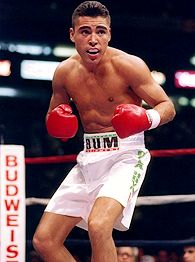 Less than a minute into the fight, De La Hoya stepped forward to land his signature overhand right-left hook combination to Valenzuela's head, but the Mexican journeyman, a veteran of 50 pro fights, took the blows and gave them right back. With De La Hoya's hands still low and his head exposed after the punches, Valenzuela returned a left jab and a short, hard right that caught De La Hoya square on the chin. It sent him back onto the seat of his pants.

The Golden Boy rolled over, stood near the ropes and shrugged to his handlers, embarrassed over the flash knockdown. Then he went back down to his knee to regroup until the referee's count reached eight.

"I got right back up, and then I thought maybe I should just take it easy, go back down, just rest for a while," he said afterward, though he didn't need a rest. "I've watched other pro fighters get knocked down, great champions, and learned from them."