Perhaps it was more difficult than Floyd Mayweather Jr. expected it to be, but he used his speed and boxing ability to claim a split-decision victory over Oscar De La Hoya to win a junior middleweight title in one of the most heavily hyped fights in boxing history Saturday night, before an electric sold-out crowd of 16,700 at the star-studded MGM Grand Garden Arena.

"It was masterpiece of boxing," Mayweather said. "I showed you why I am the best fighter of this era." 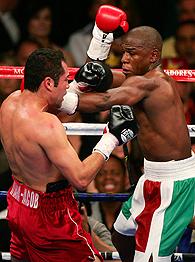 There were story lines galore heading into the fight: the reunion between Mayweather and his father, Floyd Sr., and subsequent split during training camp; Mayweather's claim that this would be his last fight; and De La Hoya firing Mayweather Sr. as his trainer and hiring Freddie Roach, among them.

But when the bell finally rang after more than five months of promotion, the fighters delivered an exciting fight worthy of the hype.

Mayweather, however, was the cagier, more accurate fighter.

"Look at the punch stats and then you can see I'm the new champion," Mayweather said. "I was having fun in there. It was a hell of a fight. I told the fans I would give them a hell of a fight, and that's what I did. Me and [uncle and trainer] Roger [Mayweather] did it. It was easy work for me. He was rough and tough, but he couldn't beat the best."

"We knew we were fighting Golden Boy [Promotions] tonight, but we survived," said Mayweather, who pulled off the rare accomplishment of winning a title in his fifth weight division. "I could see his shots his coming. I stayed on the outside and made him miss. I just fought the best fighter in our era and I beat him. It was a hell of a fight. When I came to the arena, I weighed 148. Tonight, a welterweight beat a junior middleweight."

After some good exchanges and action throughout the fight, the fighters went toe-to-toe for much of the 12th round, bringing the crowd to its feet.

De La Hoya, who lost his third fight in his past five, tried to make it a physical fight. He was successful when he could bull Mayweather to the ropes, but Mayweather didn't stay there long, as he would spin away.

Mayweather's hand speed was a crucial factor. He landed combinations before De La Hoya could get off, and late in the fight Mayweather could land hard shots one at a time and move away, especially a head-rocking right hand to the chin at the bell ending the 10th round.

The crowd cheered wildly whenever De La Hoya -- the massive fan favorite -- would do anything, but Mayweather stuck to his guns and displayed the skills that have carried him to the top of the sport.

De La Hoya, as he did in losses to Felix Trinidad and his rematch with Shane Mosley, disputed the decision.

"I felt I won the fight," said De La Hoya, who was coming off one year of inactivity. "I landed the harder, crisper punches. I felt when I landed my punches, I could see I was hurting him. I was pressing the fight and if I hadn't pressed the fight, there would be no fight. I'm a champion and you have to do more than that to beat a champion."

With rapper pal 50 Cent rapping next to him on the ring walk, Mayweather -- who earned at least $10 million, a figure that will rise dramatically when the revenues are totaled -- entered wearing the red, white and green colors of the Mexican flag and a sombrero on Cinco de Mayo.

The crowd greeted him with boos that quickly turned to thunderous cheers when De La Hoya, who earned a minimum of $23.3 million, entered the arena.

De La Hoya, whose earnings could grow to $35 million or more, came out aggressively in the first round, trying to pound Mayweather's body and slow his quicker opponent down. The crowd began to chant, "Oscar! Oscar! Oscar!" almost immediately.

De La Hoya continued to be aggressive in the second round, stalking Mayweather, pumping his jab and throwing body shots and combinations when they were at close range.

But Mayweather slowly took control of the fight. De La Hoya could never land one of his trademark left hooks with authority. He also had problems using his strong left jab.

"It wasn't the big night of my jab," he said. "I could tell when I threw it, it would snap his head back and it was working, but I just couldn't throw it. So it wasn't the best night for my jab."

Mayweather said throughout the promotion that this would be his last fight, despite the fact that he is only 30 and in his prime.

"Yes, I'm going to retire. I don't have anything else to prove," Mayweather said. "I want to start spending more time with my children, and that's what I am going to do."

De La Hoya said he would think about what he wanted to do and not make any rash decisions.

"I'm going to be very smart about the situation," he said. "I will go home and watch the fight and see how my movements were, how my body reacted and analyze the situation. I will wait and see. I will analyze the whole thing and think about it."

Mayweather's father, Floyd Sr., was ringside courtesy of tickets given to him by De La Hoya, but Mayweather Jr. was gracious to him.

"I thought Oscar won the fight," he said. "My son had better defense and caught a lot of punches, but I think Oscar pressed the fight and did enough to win."

When pressed by HBO's Larry Merchant about whether he really thought De La Hoya won, he hedged, saying, "Well, I think it was a really good fight."