MEMPHIS, Tenn. -- Middleweight champion Jermain Taylor retained the world title with a lackluster split decision against Cory Spinks while a pair of middleweight sluggers stole the show on the undercard Saturday night at the FedEx Forum.

While Taylor and Spinks produced little action and induced booing throughout their match, Kelly Pavlik and Edison Miranda gave the crowd of about 10,000 something to cheer in a shootout that Pavlik won via thrilling seventh-round TKO.

But Taylor did outbox Spinks, who spent most of the fight fleeing from Taylor. He won the fight 117-111 on the scorecard of judge Michael Pernick and 115-113 on Gale Van Hoy's card. Judge Richard Flaherty's score of 117-111 for Spinks was surprising. ESPN.com had it 116-112 for Taylor. 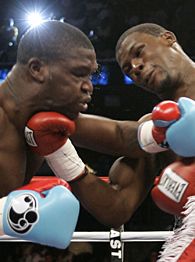 Like the crowd, Taylor was disgusted with Spinks' refusal to engage.

"You want to be champion? Fight me, don't run from me," Taylor said. "He ran the whole time. I ran every day to get ready for this because I knew it was going to happen. You can't run and win a championship. I saw some tapes of him and he's a fighter sometimes, but he ran the whole fight."

When the fight ended, Spinks, the former undisputed welterweight champion, celebrated with trainer/manager Kevin Cunningham as though the southpaw had won.

Afterward, Spinks insisted that he did.

"I executed my game plan. I think I won," Spinks said. "That's bull. I don't know what to say. It was highway robbery. I thought I gave a great boxing display. He was tough, but come on. I'm very disappointed."

If Spinks was disappointed, the crowd was more so. They booed relentlessly throughout the fight.

It began slowly and the booing started in the second round.

Taylor was trying to pick up the activity, but had trouble landing against the elusive Spinks.

Spinks, with shorter arms, had difficulty getting inside against Taylor, the naturally bigger fighter.

Taylor (27-0-1) was content to control the fight from the outside and land one shot at a time. He wobbled Spinks (36-4) with a right hand with about a minute to go in the seventh.

The CompuBox statistics illustrated Spinks' ineffectiveness. While Taylor was credited with landing 101 of 319 punches (32 percent), Spinks landed just 85 of 542 (16 percent).

With Pavlik winning the co-feature, he earned a mandatory shot at Taylor, who watched the fight in his dressing room.

"Miranda is overrated," Taylor said. "Pavlik, I give the man credit. If Kelly Pavlik is the best fight out there for the most money, I will fight him."

Expectations for the Pavlik-Miranda eliminator ran high, and they delivered the action-packed brawl people had hoped for between two of the rising stars of the division.

But it was Pavlik, the more skilled, more polished fighter, who thrashed Miranda.

The seventh-round TKO secured Pavlik (31-0, 28 KOs) an eventual mandatory shot against Taylor, and after his sensational display of punching power and the ability to take a shot, he deserves it. 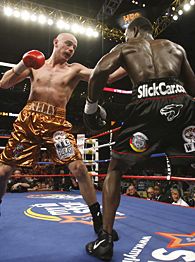 "Jermain Taylor is a great champion," Pavlik said. "I definitely want to fight him."

This was a barnburner from the opening bell as the sluggers charged right at each other and began trading. But Pavlik's punches were straighter and more frequent, and he was backing Miranda up.

"My plan going into the fight was to back him up every minute, every second. I didn't want him to get set up," Pavlik said. "But I got hit hard, too. This wasn't an easy fight."

Said Pavlik promoter Bob Arum: "This is the way middleweights used to fight in the 80s."

Arum, of course, promoted Hall of Famer Marvelous Marvin Hagler throughout his career, including the epic fight with Thomas Hearns and matches with Sugar Ray Leonard and Roberto Duran.

The action was blazing throughout, especially in the back-and-forth second round. They traded hard power shots for virtually the entire round, bringing the crowd to its feet.

Pavlik hurt Miranda with a right hand and was having his way when Miranda rallied with a thudding left and right that stunned Pavlik, whose nose was bleeding when the round ended.

Miranda's best moment came in the fifth when he cracked Pavlik in the middle of the ring with a pair of flush fight hands. But Pavlik's chin held up.

Pavlik knocked Miranda (28-2) down twice in the sixth round. He landed a huge overhand right against the ropes, and Miranda went down and barely got to his feet.

When he did, he looked down and spit out his mouthpiece. Referee Steve Smoger deducted a point, but Miranda received some extra time to try to recover while it was replaced.

It didn't matter. Pavlik, 25, of Youngstown, Ohio, unleashed a flurry with Miranda, 26, pinned on the ropes and knocked him down again with 20 seconds to go. Miranda barely survived.

In the seventh, Pavlik continued to assault Miranda, pushing him into a corner and teeing off. He got off a seven-punch combination before Smoger finally stepped in and stopped it just as it appeared that Miranda's corner was about to do the same.

"When the fight first started, I thought it would be a really tough, 12-round fight," Pavlik said. "Then I hit him with straight, hard right hands. It's happened before. Once they feel my power, they start thinking to themselves, 'He is really strong.'"

For all the trash talking Miranda did before the fight, the Colombian didn't have much to say afterward.

"The heroes go down but they get back up. I will get back up," he said.

Welterweight Andre Berto (18-0, 16 KOs), the 2006 ESPN.com prospect of the year, turned in yet another impressive performance as he beat and battered Martinus Clay (12-15-2) into submission at 43 seconds of the seventh round of a scheduled 10-rounder.

Despite his poor record, Clay was brought in because he is tough and figured to give Berto rounds. He did, absorbing tremendous punishment.

Berto, 23, made his eye swell and dropped him with a quick left hand in the sixth round. He followed with a massive onslaught after Clay got up, but Clay survived the round.

When the seventh started, Clay didn't look like he wanted to continue as he wearily got off his stool. Berto, who showed speed and power, landed a few more shots until Clay finally turned his back and quit at 43 seconds.

Berto will step up his level of competition for his next fight, according to promoter Lou DiBella. He said he is talking to the handlers of Carlos Quintana about a match on ESPN2 in July. Quintana owns a victory against Joel "Love Child" Julio, but was stopped in a welterweight title bout by Miguel Cotto in December.

• Middleweight Ronald Hearns (14-0) won every round to take a shutout unanimous decision against Dennis Sharpe (17-5).

Hearns, the 28-year-old son of boxing legend Thomas Hearns, won 80-72 on all three scorecards. There was little suspense in the fight as Hearns, who turned pro in 2004, used a stiff jab and hard right hands to dominate from start to finish.

• Heavyweight Chazz Witherspoon (18-0, 12 KOs), a cousin of former two-time heavyweight titlist Tim Witherspoon, scored a third-round TKO of Joe Stofle (10-11) in a fight much tougher than most expected.

It was a toe-to-toe slugfest with Witherspoon, in his first fight with DiBella, landing stiff shots and the flabby, but game, Stofle absorbing them and following with his own bursts of punches.

Witherspoon, with swelling below his right eye, started to slow Stofle down at the end of the second round when he landed a brutal uppercut. Stofle was running out of gas and taking unanswered punishment along the ropes when referee Smoger stopped it at 1:09 of the third.

Navarro, a 2000 U.S. Olympian, knocked Gomez twice before the fight was halted at 1:38 of the sixth. He dropped Gomez with a left to the body in the first round and did it again to end the fight. Gomez, gasping for air, dropped to a knee and took a full count.