ATLANTIC CITY, N.J. -- Kelly Pavlik had the power, and boy did he use it.

Down and nearly out in the second round, Pavlik rallied to score a massive seventh-round knockout of Jermain Taylor to seize the world middleweight championship Saturday night before an overjoyed crowd of 10,127 at the Boardwalk Hall.

Thousands of fans from Pavlik's hometown of Youngstown, Ohio, who made the trek to the shore were rewarded as Pavlik became the latest champion from a city that also produced world champions such as Ray "Boom Boom" Mancini, Jeff Lampkin and Harry Arroyo. 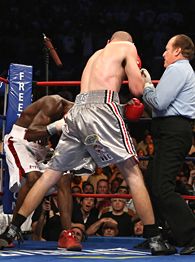 The Ohio contingent dwarfed a weak turnout from Taylor's hometown of Little Rock, Ark., and Pavlik was grateful for their support.

"Now, I'm up there with all the great Ohio champions," Pavlik said. "We're a small city. We're a town of only 92,000 people. But those types of world champions out there -- it's an honor to be out there with these guys."

Pavlik's big knockout erased a deficit on all three scorecards; he was down four points on one card and three points apiece on the other two.

The win also made a mockery of the words from Taylor trainer Emanuel Steward, who predicted the fight would be competitive for "about a round."

Taylor (27-1-1, 17 KOs), making his fifth defense, was in control when Pavlik (32-0, 29 KOs) unloaded a powerful finishing flurry, which included a right hand on the chin and a brutal left and right uppercut that left Taylor in a heap on the mat in a corner.

It was the first time in his career that Taylor had been knocked down as a professional.

"He can take a hell of a punch. Eventually I think it just caught up to him," said Pavlik, who had lost an 11-5 decision to Taylor in the 2000 U.S. Olympic trials. "It was a straight right hand. It was finding it's mark all night. One thing I do have is the finishing touch. Those were real shots. If he could've gotten up, he would have."

Taylor had been heavily criticized for recent lackluster performances against Cory Spinks and Kassim Ouma, but he looked well on his way to erasing them with a dominant performance through the first six rounds.

He came within a hair of scoring a second-round knockout.

Taylor dropped Pavlik once, almost knocked him down for a second time and then teed off on him for the rest of the round, which ended with Pavlik bleeding from his nose and mouth.

"He caught me with a good one. Being in there with Jermain, the kid can punch like a mule," Pavlik said. "I was really hurt bad. I was really shaky. I just did what I could to survive the round. When I got back up he hit me with some more hard shots, but I got through."

Taylor said he was so anxious to finish Pavlik off that he punched himself out.

"I had him hurt. I thought I had him," Taylor said. "I threw a bunch of unnecessary punches. I went wild trying to get him out of there. I threw a lot of punches I shouldn't have. I give it to Kelly, he fought a great fight."

After surviving the second round, Pavlik actually had a good third round and was able to stay in the fight. He never stopped throwing punches and finally reached Taylor's chin in the seventh round.

"He was gone, totally gone. Out," referee Steve Smoger said.

Taylor has a rematch clause in his contract which calls for the return bout to take place at a 164-pound limit, meaning it won't be a championship fight. However, both fighters appeared to make weight more easily than they usually do, so it's possible they could do it again for the title.

Pavlik, who had earned a mandatory shot at Taylor on his May 19 undercard with a brutal seventh-round TKO of Edison Miranda, said he would have no problem honoring the contract and fighting Taylor again in a nontitle bout.

Taylor, 29, said he planned to take advantage of the rematch clause.

"I lost the championship. So now it's all about going back to gym and regrouping," he said. "I would like to fight him again my very next fight."

Taylor's loss represented the first time that one of Steward's champions had lost after training at his secluded camp in Pennsylvania's Pocono Mountains.

It also was the biggest win in the career of little-known trainer Jack Loew, who has been with Pavlik, 25, since he was an amateur.