On Saturday, Manny Pacquiao attempts to enhance an already formidable legacy and stamp his frenetic brand of boxing into Filipino history books. It is an impressive book, chronicling a saga that reaches back to the 1920's.

And while Pacquiao's popularity is unrivaled, it's not the first time a Filipino boxer headed a list of most admired persons of the island nation. But if Pacquiao's legacy is as great as most believe, it will spawn a new generation of boxers that will try to emulate his near legendary status, perhaps landing on this list 20 years from now. 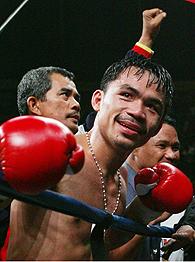 The Philippines have a long and proud boxing history, stretching back to the late 1890's when the first Filipinos began to launch their fists for pay. Boxing came to the island via American soldiers, who used sport to bond with the local population. To date, that cultural bonding initiative has produced 28 champions, beginning with Pancho Villa in 1923 and culminating with Gerry Penalosa's ascension to champion status this year.

Not included in this list are any active boxers, so Pacquiao and Penalosa are not eligible. This was done because it's hard to place someone whose work is still in progress, and it allows me to bring names to the forefront that the public might not be aware of. American boxers of Filipino extraction like Brian Viloria and Jesus Salud were omitted as well.

10A. Anthony Villanueva -- Villanueva is an exception in Filipino boxing, an amateur star who never matriculated to the paid ranks. Villanueva was an outstanding amateur who competed in the 1964 Olympics and won the silver medal at featherweight. Many believe the 19 year old should have been awarded the gold, and that Russia's Stanislav Stepashkin was given preferential treatment from judges swayed by politics. It was a close 3-2 verdict, and came on the heels of Villanueva defeating American favorite Charles Brown 4-1 in the quarterfinals. The ringside radio reporter was stunned, and told his nation "We were robbed."

10. Rene Barrientos (39-7-2, 1962-1978) -- It seemed like this southpaw was destined to be a runner-up his entire career, but the WBC's habit of stripping champions gave him an opening. Barrientos gained fans in losing a decision to the legendary Flash Elorde early in his career, and he handed streaking countryman Love Allotey a loss later that same year. He fought successfully for the next two years, moving up the ratings and traveling to Japan, Panama and Venezuela. In his first title bout, he was unlucky to draw with Hiroshi Kobayashi in Japan, and was rewarded with a second title shot when Kohayashi was stripped. He took advantage of that by defeating Californian Ruben Navarro, but lost the title in his first defense to Yoshiaki Numata. A rematch ended in a split decision loss, again in Japan. Barrientos needed more power to mix with the elite.

9. Eribito Salavarria (39-11-3, 1963-1978) -- Salavarria was another fighter in a long line of great Filipino flyweights, and the first Filipino to regain his world title. He got a shot at the Orient crown after splitting four fights with Ric Magramo for the Filipino title, but lost a split decision in Japan to Tsuyoshi Nakamura. He went on a three year unbeaten streak after the loss, including a second-round knockout of WBC champion Chartchai Chionoi in Thailand. He defended the title twice on the road (defeating future champion Betulio Gonzalez), then lost his title to Venice Borkhorsor in Thailand. Salavarria showed mental strength by reclaiming the title with a win over Susumu Hanagata (the second time he took his title) in Japan. Hanagata got revenge, and won the title back via another split decision. Salavarria got one more title chance, but was stopped for the first time by Alfonso Lopez. Inconsistency plagued Salavarria, who lost non-title fights in two important trips to America.

8. Dodie Boy Penalosa (31-7-2, 1982-1995) -- Penalosa was an all-around boxer whose story outside the ring was just as inspiring as it was inside the ropes. Penalosa overcame the childhood disease of Polio, which made his left leg shorter than his right, to battle the world's elite. A quick study, he turned pro at the beginning of 1982, and was fighting for the IBF title in December of 1983. He won that title in his 13th fight, and made three defenses. The southpaw gave up the junior flyweight title and moved up to face WBA flyweight champion Hilario Zapata. Penalosa lost that battle of speedsters, but rebounded to win the IBF title two fights later. He was shockingly knocked out in his first defense, and lost a close title fight to Dave McAuley in England two years later. It was his last appearance on the world stage, even though he continued to fight for five more years. Four of his seven loses came in an ill-advised comeback.

7. Rolando Navarette (54-15-3, 1973-1991) -- The high stakes gambler of this list, he either won or went down in a blaze of glory. It took seven years for the power puncher to get a title shot, after fighting everyone in Asia with mixed success. He was bombed out in five rounds by Alexis Arguello, so it came as a surprise when he got another title shot one year later (having lost, and not beaten anyone of note). Cornelius Boza-Edwards made a tactical mistake slugging with the wild southpaw, and was knocked out in five rounds. Navarette became an instant star at home, and partied his way out of the title after one defense. Navarette did not give up his title easily, losing an inspired war of attrition to Mexican Rafael Limon. Still a dangerous puncher, he never got another title shot, and his only win of note was a 10-round decision over Limon after he had lost the title. He was convicted of rape and spent time in jail, and his life continues to spiral downwards in Hawaii.