Joe Frazier hasn't fought Muhammad Ali in 32 years but he spars with him every day.

They are both old men now, broken by difficult lives and too many years spent fighting for their paychecks. They have paid dearly for the prizes they won with the biggest price extracted from each by the other.

Although both would be diminished as fighters if they had never crossed paths, for Frazier neither time nor shared infirmities have softened his heart. He always has been a hard man and there is no harder place inside him than the spot still occupied by Ali. It's a large spot where the bruises remain even after all these years.

That's why there was always only one picture of boxing's greatest legend hanging in Frazier's Gym at 2917 North Broad St. in a rundown section of Philadelphia that few tourists visit. It was the one of Ali flat on his back, Frazier standing over him with both pain and triumph on his face.

That's how Frazier wants to be remembered -- in that moment after he sent Ali to the floor in Round 15, the final round of the first fight of their tragic trilogy. The rest he'd just as soon forget. Or rewrite.

Ali taunted and tortured Frazier outside the ring far more than he did inside it, and he did a lot of damage inside it to Frazier. He marginalized him in a way no one else could have, not only demeaning and ridiculing him but also transforming him into something he was not. The latter has been, it seems, what Smokin' Joe has never been able to forget. Or forgive.

At times there have been words of reconciliation between the two. But anyone who watched one night in Las Vegas a few years ago as George Foreman and Larry Holmes quietly took turns keeping themselves between an ever-pacing Frazier and his old and infirm nemesis, Ali, at a function called to celebrate them and heavyweight boxing's greatest living champions, understood that the river of darkness ran deep inside Frazier. And the candle still burned hot.

He'd made that clear in 1996 at the Olympics in Atlanta when he was beside himself after learning Ali would be lighting the Olympic flame. Once it was done he told a small gaggle of reporters, "I should have been picked. I wish Ali had fallen into [the flame]. If I had the chance, I'd have pushed him in."

That same week, Frazier was signing autographs along with a group of other top American Olympians selected by the United States Olympic Committee as among the best the country had ever produced. A woman and her young son approached and asked Frazier what medal he'd won. When he told her "boxing," she asked if he'd ever fought Ali. That's when the dark clouds began to brew.

He said he had and she asked if he'd beaten him. He said he did but such is the depth of his feelings on the subject of Ali that he could not stop there. He suggested she look at the physically broken man Ali is today and understand who made him that way. 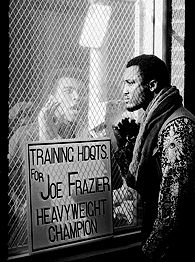 That is a theme Frazier has visited many times, including in the late Mark Kram's powerful book on the two entitled "Ghosts of Manila." Kram eloquently described what Ali means to Frazier when he wrote, "Nearly the end of the century and Muhammad Ali still swims inside of Joe Frazier like a determined bacillus  at times his contempt [for Ali] just lay there hissing."

A bacillus, according to the American Heritage Dictionary, is a chain of bacteria. Who but Frazier would think of Ali in that way? Who but a man still deeply stung by the insults Ali threw at him so long ago, back in 1970, 1974 and 1975, could feel such hatred more than 30 years since either raised his hand to the other?

Kram also tells of Frazier claiming he'd made Ali what he is today. When the old writer asked the old fighter if he was referring to his old opponent's long battle with Parkinson's, Frazier snapped, "I made him what he is. Take it any way you want."

It's been said that Frazier has diminished both himself and his selling power by his very public hatred of his old and now revered rival. While the latter might be true the former is not. Not, at least, if one understands things from Frazier's point of view.

Ali has always said when he called Frazier a "gorilla" and when he portrayed him as an ignorant tool and, worse, "an Uncle Tom," it was all just to sell tickets. Just a marketing scheme, he has said many times. A joke. But Frazier knows what the world long ago forgot. He knows the truth.

There was no marketing scheme necessary when they first fought at Madison Square Garden in 1970. Ali, not long removed from the unfair exile imposed upon him by a government afraid of his politics and his growing social power, was a giant. He was far larger than the sport. Frazier, meanwhile, was the recognized, undisputed heavyweight champion of the world, a pain machine feared by everyone. When they met, it was not a fight. It was a social and societal event, a watershed moment. It needed no more hype.

While they were different fighters in 1974 and 1975 and their skills had begun to slip, their legend had only grown, as had their symbiotic relationship. The need to insult Frazier, to make a clown of a barely educated gladiator to sell tickets, is nonsense. Today's world might not remember that, or simply might not want to remember because there was been much editing of this portion of Ali's mostly noble life, but Frazier remembers.

"I hated Ali," Frazier told writer Thomas Hauser for his seminal biography, "Muhammad Ali: His Life and Times." "God might not like me talking that way, but it's in my heart. I hated that man  How would you feel if your kids came home from school crying because everyone was calling their daddy a gorilla?  20 years I been fighting Ali, and I still want to take him apart piece by piece and send him back to Jesus.

"I don't like him but I got to say, in the ring he was a man  He shook me in Manila; he won. But I sent him home worse than he came. Look at him now. He's damaged goods. I know it; you know it. Everyone knows it  He was always making fun of me. I'm the dummy; I'm the one getting hit in the head. Tell me now; him or me; which one talks worse now?"

While those words and others that have followed, both in Atlanta and well after, make clear the depth of the pain Frazier feels when he thinks of Ali. Some still wonder why. Certainly what they did to each other in the ring was an accepted part of their brutal business. Prize fighters come to the arena with one aim in mind -- to concuss their opponent. No one felt that way more than Frazier and he understood that what flowed from that could be only one thing -- pain and agony.

He didn't resent that. Never has. He probably could have even found a way to accept losing two of their three fights had other things been different. He was, after all, a guy who used to slip Ali a few hundred during his years of exile when no one was looking. He was the guy who appeared for him at several hearings and pre-arranged publicity stunts to keep his name alive as Ali was trying to be reinstated. He was the guy who did what he could to help Ali when he was down, only to be kicked by him when he got up.

That's what Frazier can't forgive. That and the fact that Ali took it too far.

"Before we fought, the words hurt more than the punches," Frazier said in Hauser's book on Ali. "Now he says he did it to help the gate but the gate didn't have nothing to do with it. We had our guarantees -- $2.5 million each  Calling me an Uncle Tom; calling me the white man's champion -- all that was phoniness to turn people against me."

Fight manager and writer Dave Wolf, who would later handle Ray Mancini and author a landmark book called "Foul!" on basketball player Connie Hawkins, was a part of Frazier's camp back then and he recalls, "I'm sure Ali has forgotten most of what he did  [but]  there were moments when Joe was so hurt and which he remembers vividly, even now."

Even all these long years later Frazier, a man who willingly accepted pain for the chance to inflict it, can't forget the ache of 35-year-old insults because they cut too deep. It hurts Frazier to acknowledge that he would not be remembered the way he is without those three nights of struggle with Ali. It hurts because too many people close to him were bruised not by what happened in the ring between them, but by what happened before them.

That is a pain that time cannot erase. At least not yet. And so Joe Frazier fights on, sparring with the ghost of a legend he once put on his back but never has been able to subdue.

Ron Borges, who has won numerous Boxing Writers Association of America awards, covers boxing for HBO.com and for Boxing Monthly.