LAS VEGAS -- Oscar De La Hoya, who announced last month that he was seeking a spring tune-up fight ahead of a planned September rematch with Floyd Mayweather Jr., has finalized a deal with his opponent, former junior lightweight titlist Steve Forbes on May 3, multiple sources involved in the deal told ESPN.com on Friday. 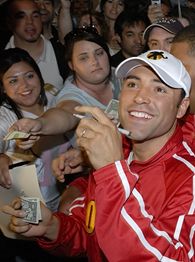 Confirming the fight from his Auburn Hills, Mich., home on Friday night, Forbes, who will be a prohibitive underdog said, "There's a deal made. I like Oscar but I'm definitely coming to win. When the bell rings you will see I am not in there just to be in there. This is like another Rocky story -- the biggest name in boxing is giving a guy like me a shot."

De La Hoya and Forbes, who in addition to once holding a 130-pound world title was also the runner-up on the second season of "The Contender" reality series, will fight a 12-rounder at the Home Depot Center's outdoor soccer stadium in Carson, Calif.

The maximum weight for the fight is 150 pounds.

It will be televised live on HBO, De La Hoya's first non-pay-per-view fight since stopping Arturo Gatti in the fifth round on March 24, 2001.

De La Hoya has said he wanted to give back to his fans by doing an HBO fight instead of another pay-per-view. HBO didn't expect that sort of multimillion dollar expense, but agreed to buy the fight and will pay for it with money outside of the network's boxing budget, one of the sources said.

"I've always wanted to be on HBO. This has been a long time coming," Forbes said.

The Mayweather family feud, already so much of a story line for the proposed Mayweather-
De La Hoya rematch, will also be a part of De La Hoya-Forbes.

Forbes' trainer is now Roger Mayweather, the estranged brother of Floyd Sr. and the trainer of Floyd Jr., who is also estranged from his father.

"I guess all that Mayweather stuff will be a bit of entertainment won't it," said Forbes, who will open training camp on March 1.

Forbes said he thinks De La Hoya selected him because "he thinks he can beat me, I'm a smaller guy, I'm not a big puncher and I have trained with the Mayweathers."