Two months after slipping into a coma following a brain injury sustained during a televised fight, San Antonio welterweight Oscar Diaz is awake and breathing on his own. 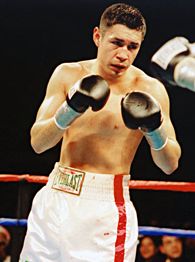 "He's opening his eyes and showing improvement. He is off the ventilator and breathing on his own," Wiley said.

Diaz's family and neurosurgeon Dr. David F. Jimenez were scheduled to appear at a 3 p.m. ET news conference at the hospital to provide a more detailed update on his condition.

"It's very exciting to see Oscar open his eyes. He's a fighter and I believe he will get better," Theresa Diaz, his mother, said in a statement.

Diaz (26-3, 12 KOs), 25, collapsed in his corner following the 10th round of a TKO loss to Delvin Rodriguez on July 16 in the main event of "Wednesday Night Fights" on ESPN2. He was rushed to the hospital, where he underwent emergency surgery to relieve swelling on his brain. He had been in a coma since.

All along, the doctors said they expected him to eventually come out of the coma.

Rodriguez said he was very relieved to hear the news.

"It's very good news to me," said Rodriguez, when reached at his training camp, where he is preparing for an Oct. 3 bout in the Dominican Republic. "The doctors kept saying he would come out of it, but you don't believe it until it happens.

"I've been waiting for his moment for a long time. It's been difficult. I kept thinking about him and how his family was doing. I've been worried."