Here's the deal. I'm sitting in the press box with Horseplayerpro.com's Joe Kristufek. We're wrapping up quotes from the Breeders' Cup draw. I go to update my Facebook. There's a friend request from a popular jockey. "He's cute," I say, "but he's not as cute as Channing Hill."

Then Joe gets an idea. "You should write Claire Novak's top 10 list of cutest active jockeys," he suggests. "It would be a riot!" From there, the idea morphs to "sexiest jockeys," then to "sexiest Breeders' Cup jockeys," because that kind of ties in with the season and location.

So here they are, the sexiest jockeys riding in the 2009 edition of the Breeders' Cup, as complied through consultation with my fellow members of the press corps. 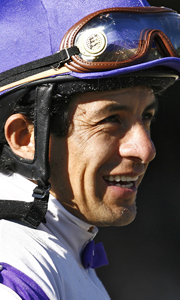 10. Julien Leparoux (Classy Sexy): he can pull off the sexy vibe, but this young Frenchman is also a little geeky. He does have an extremely witty, dry sense of humor which some girls find attractive. When paired with his gentlemanly qualities, the effect can be magnetic. Julien, here are my suggestions: work on your dance moves and put a better picture on your Facebook profile. One that actually shows your face.

9. Robby Albarado (Charming Sexy): he isn't "hot," but the veteran Cajun does know how to turn on the charm ... and there's something about those eyes. Maybe it's because he oozes classic bad-boy vibe. Nine out of 10 women consulted would have agreed, if I'd had the time to ask. Trust me. Robby, that Louisiana "honey" and "baby" stuff works with some women, but not all of them like it, which is why you're stuck at number nine.

8. Alan Garcia (Cute Sexy): Yeah, yeah, he's cute and he knows it. That's the problem. To quote the 24-year-old Peruvian, "Look at this face. You see this face? How can you look at this face and tell me there is any other rider more cuter than me?" Ummmm ... I'll let you form your own opinions, or perhaps Mr. Garcia can convince you. Sexy, however, does not need an advocate. It's an automatic vibe. So tone down the convincing arguments, and maybe you'll move up on the list next year.

7. Garrett Gomez (Rugged Sexy): Gomez exudes power and focus, and there's something sexy about an athlete at the top of his game. It's like he's channeling David Beckham or something. The one foot shorter version.

6. Rosemary Homeister Jr. (Sexy Sexy): she's a successful female. She's a jockey. What could be sexier than that? Rosemary, pull the experience card and give those younger girl jocks like Chantal and Inez a run for their money.

5. Ryan Moore (Junior Sexy): this guy could be your typical clean-shaven all-American boy except for the fact that he's European. You get the picture. Ryan, watch out for cougars in America. They'd probably like to eat you alive. 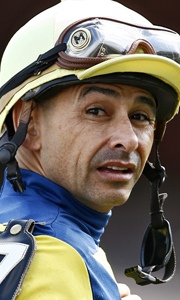 2. Joel Rosario (Latin Sexy) is the hottest thing since sliced bread on the Southern California circuit -- in more ways than one. His natural talents on the track will only improve as he gets older, and the same can be said for those chiseled features. Aye, Papi!

And the sexiest jockey riding in the 2009 edition of the Breeders' Cup is:

1. Mike Smith (Classic Sexy). Yeah, he's got it going on. The smile. The eyes. The body. He doesn't work at being sexy or charming, that's just the way he is. When you combine charisma and class with complete authenticity, that's one helluva sexy vibe -- and to make him even more attractive, Smith pairs with West Coast racing's leading lady, the unbeaten Zenyatta, in this weekend's Breeders' Cup Classic. Just call them horse racing's power couple.

Disclaimer: Yes, I know most of these jockeys. No, I will not set you up on dates with them. Don't even ask. -- C.N.

Claire Novak is an award-winning journalist whose coverage of the thoroughbred industry appears in a variety of outlets, including The Blood-Horse Magazine, The Albany Times Union and NTRA.com. She lives in Lexington, Ky.