<
>
Finley: Jockey's tragic death shows that weights must change
16yBill Finley
Yankees' Boone having surgery to get pacemaker
New York Yankees
2h
Sheriff gets warrant for black box in Tiger SUV
7h
Jets GM open to Darnold offers, not trade for star
New York Jets
1hRich Cimini
Ex-NFL TE Winslow II gets 14-year sentence
2h
WFT replaces cheerleaders with coed dance team
Washington
6hJohn Keim
Indians prez: 'Not able to' comment on Callaway
Cleveland Indians
2h
Altobelli, who managed O's to '83 title, dies at 88
Baltimore Orioles
4h
USMNT's Cannon: Death threats 'part of society'
6h
The moments before and after everything changed for Tiger Woods
9hBob Harig and Ramona Shelburne
Lesser-known stories of J.J. Watt's impact on Houston off the field
Houston Texans
10hSarah Barshop
The dissolution of James Harden and the Rockets, in their own words
Houston Rockets
9hTim MacMahon
'I had this fire in me': Jan Blachowicz has powered his way from nearly cut to UFC champ
8hBrett Okamoto
Euro 2020, 100 Days Out: Will the tournament go ahead? Will fans be allowed?
12hMark Ogden
'We went into panic mode': What it was like trying to run a PGA Tour event in the year of the pandemic
1dBob Harig
Should UConn's Paige Bueckers win national player of the year?
UConn Huskies
6hMechelle Voepel
NHL Power Rankings: Key trends for all 31 teams
Anaheim Ducks
9hEmily Kaplan
Free-agency game plans for all 32 NFL teams: Who's coming back, available and could be added
1dNFL Nation
'He was a basketball genius': How a 17-year-old Kobe wowed Jerry West and the Lakers
Los Angeles Lakers
1dDavid Fleming
Women's Champions League: USWNT stars in action, Lyon again the team to beat
1dKathleen McNamee
Boxing, MMA and her own PPV: Claressa Shields bets big on herself in 2021
1dMichael Rothstein
Aston Martin reveals first F1 car for 2021 debut
6hESPN
Jul 27, 2005

The death of apprentice jockey Emanuel Jose Sanchez last week at Colonial Downs was tragic but not necessarily a surprise. Sanchez, a 22-year-old apprentice, was one of many jockeys around the country who went to extraordinary and dangerous means to reduce his weight so that he could shrivel down to the size required in this country to be a jockey. In his case, it killed him. 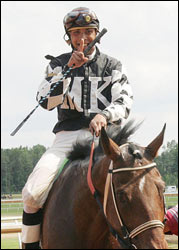 Shorlty after riding a horse named Bear On Tour in Friday's fourth race at Colonial, Sanchez was found on the shower floor in the jockey's room, where he had lapsed. He went into a coma and died shortly thereafter at an area hospital.

Sanchez apparently died of dehydration, the result, no doubt, of his spending hours in the sweat box and/oror taking Lasix pills to take off water weight. He wasn't the first. A jockey at Penn National named Chris McKenzie starved himself to death in 2000. Unless, something is done -- and done quickly -- there will be jockeys who die because of their attempts to emaciate their bodies.

A sport that has paid far too little attention to this problem must deal with it and fix it. It can start by raising the scale of weights. The current scale of weights has risen little from the one established when racing began hundreds of years ago and is impractical considering the overall increase in human weight in the past 100 years. Asking full grown men in the 21st century to weigh 110 pounds or less is simply not reasonable -- or safe.

A recent study conducted by the National Coaching and Training Centre in Ireland, where jockeys already ride at higher weights than they do in the U.S., confirmed that there are numerous health issues directly related to the weight structure in Irish racing. The major issues, the study found, are dehydration, bone density and body fat. Following the release of the study, which was conducted on 27 jockeys, Irish racing officials requested that a consultative process be set up with the goal being the introduction of new weight structures.

As much sense as this makes, similar efforts in this country are always met with derision and toothless arguments that changing the scale of weights is unnecessary. Trainers have argued that it is not fair to ask a horse to carry even four or five more pounds in a race, yet have no problems using a 150-pound exercise rider in the mornings. It is hard to imagine how a slight increase in weights can hinder a horse weighing some 1,000 pounds. Steeplechase horses routinely carry 150 pounds or more in a 2 1/2-mile jump race with no problems.

Others say raising the weights will just encourage larger individuals to starve themselves to death to make weight. That may be true. It's also may be true that if Sanchez were allowed to weigh five or six pounds more he may still be alive today. Just those few pounds could have made the difference.

Perhaps what is most disconcerting about the Sanchez situation is that it was well known around the racetrack that he wis weight reducing methods were putting him in danger. According to the Daily Racing Form, he was warned five weeks before his death about his weight-loss tactics. The warning came after the rider was so week after his lone winner at the meet that he was having difficulty getting his mount to the winner's circle.

Colonial stewards did more than most tracks would have in a similar situation. But they obviously didn't do enough. It seems clear that Sanchez was putting himself and other riders in danger because he was evidently so weak and dehydrated. For his own safety, he should have been banned after the June 20 winner's circle incident and politely told that he was too big to be a jockey.

The stewards were put in a difficult spot. With no rules regulating a jockey's condition and health, they probably found it hard to deny someone a chance to make a living based on a judgment call. The place to start is with a ironclad rule that a jockey cannot ride unless they have at least 5 percent body fat, which is similar to regulations in cycling and gymnastics. Every track should also have a nutritional counselor and a doctor on hand to advise and regularly examine jockeys. The doctor should be allowed to ban any rider he or she believes is a danger to themselves.

The jockeys themselves took action three days after Sanchez's death when they refused to ride the six remaining races on the Colonial card because of extreme heat. It's those sort of proactive moves that can save lives.

It's too late for Sanchez. It's not too late to save the next one.